An informal survey of Heartland voters finds the president has not made a strong impression so far. 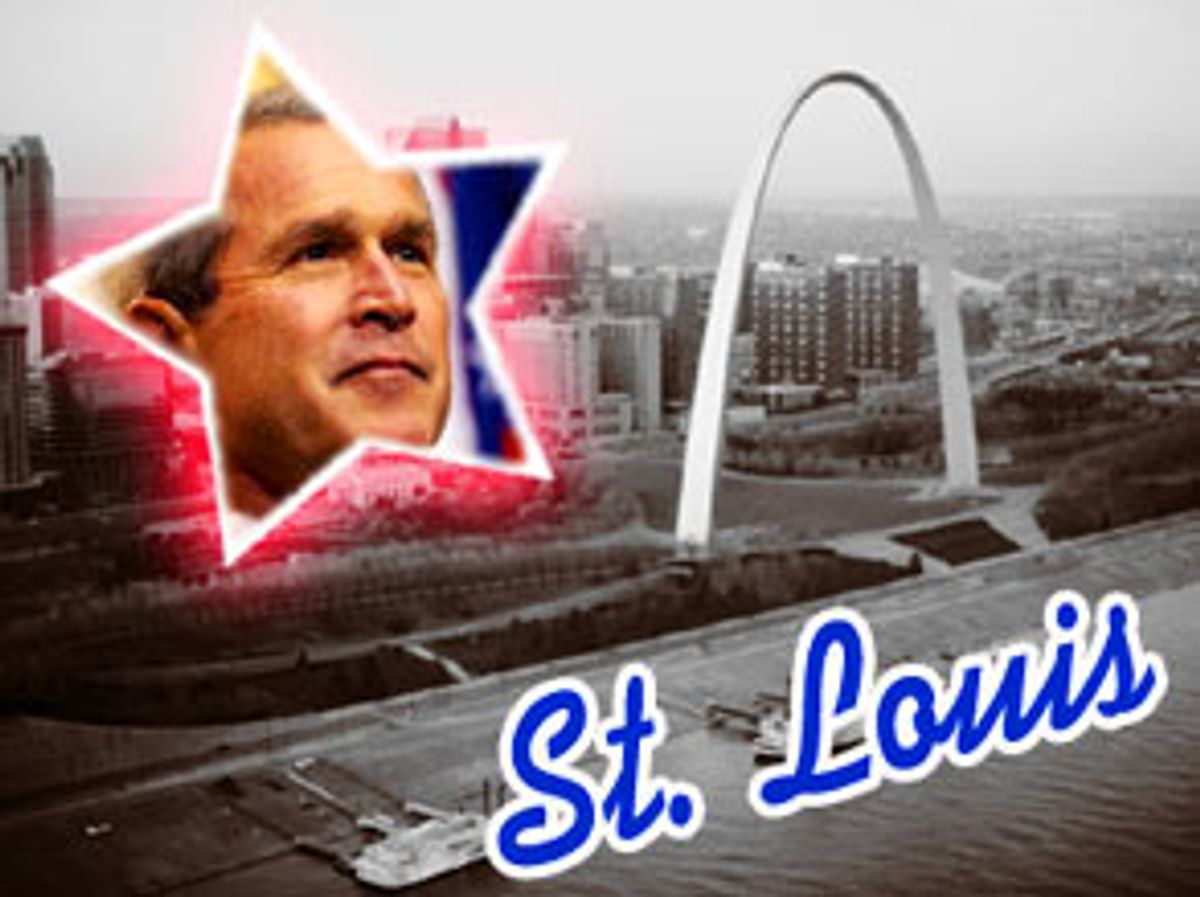 Nine months ago this city was a battleground in the Election Day war whose most famous fighting took place in Florida. But as the winner of that war, President Bush, headed off to his Texas ranch for a monthlong vacation, Salon took to streets so sweltering that the ubiquitous squirrels could be seen strolling from tree to tree to get a sense of how the people in this Democratic stronghold in a Republican state are responding to him so far.

If it's Bush's aim to be the low-key president, he seems to be succeeding here. It's hard to find a St. Louisan willing to work up a sweat over him.

"I just feel real neutral about it, you know? I don't feel positive or negative about him either way," said Larry, a 52-year-old business architect munching on a McDonald's burger in the food court of the St. Louis Centre mall in the heart of downtown. "Maybe part of it's because there hasn't been a crisis situation come up yet for him to deal with." Larry says he voted for Bush. Like many of the people approached on the streets by a stranger with a notebook for this story, he asked that his last name not be used.

St. Louis was the site of an Election Day skirmish that involved a judge issuing a court order to keep the polls open an extra three hours in response to a Democratic lawsuit, then the order being overturned by an appeals court 45 minutes later. Missouri Republicans and Democrats are still fighting about whether anything illegal happened, but it doesn't seem to be Topic A over back fences in heavily black, poverty-wracked north St. Louis, where the new president also hasn't made much of a splash.

"I don't have any opinion about him. I don't hear about him," said Kionna, a 21-year-old certified nurse's assistant. "You heard about [Bill Clinton] a lot, about him doing stuff and just about him period," she said. "You don't hear nothing about [Bush] doing too much. He could start doing a little something."

A middle-aged man named Al, waiting for his car to be repaired at Puckett's Phillips 66 on Kingshighway and Natural Bridge Avenue, also hasn't been overwhelmed by news of the man from Texas. "I don't really know what he's doing," he said. "I never hear about him. I heard about his daughters, that's about it. He ain't in the media. I listen to the news and I ain't heard nothin' from him."

Over at a lawn mower repair shop just off Dr. Martin Luther King Drive, though, Bush had no fan in a former security guard on disability who identified himself as Mr. Temple.

"He's not doing too good as far as I'm concerned," Temple, 51, said. Temple blames Bush for trouble he's had maintaining his benefits under guidelines that he says have gotten more strict. "It's really hard out here, people trying to get their medicine, buy food for their family, pay these light bills and gas bills. He's hurting a lot of people."

("Actually, we raised the limit that people can earn," said Social Security Administration spokesman Mark Hinkle, pointing out that the change, made by the agency with no input from Congress or the president, was announced prior to Bush taking office.)

Bush fared better, as you might expect, among the downtown business crowd.

"I'd say like a 7 on a 10 scale," said Larry Bumb, 65, a computer consultant and Bush supporter who commutes into the city from O'Fallon, Ill., a suburb across the Mississippi River. "I think he's united a lot of different factions that haven't come together before, and restored some sense of dignity after the disaster that Clinton created with all of his personal episodes, which was really unfortunate -- at least if Bush is doing any indiscretions he's kept them private and quiet, not that I have any basis that he has done anything wrong."

"I think he's done an excellent job, pretty much because I agree with his policies," said Mary Tobin, 51, who works "in management" downtown and lives in St. Louis County. "The tax rebate No. 1, because definitely I think that we pay more taxes than we ever need to pay." As Tobin enjoyed a cigarette in the gathering late-morning heat, she admitted that Bush isn't perfect. "I think probably his weakest area is foreign affairs," she said, "but I feel that's what he has such strong advisors behind him for."

The tax rebate failed to impress Larry Klinger, a 54-year-old auto-body specialist on strike with the International Association of Machinists, District 9, against St. Louis auto dealers.

"This rebate that we're getting? That's a farce. That's a smoke screen, political bullshit. I can't see anything that he's done," Klinger said as he walked the picket line in front of a Cadillac dealership in Crestwood, southwest of the city. "And then I'm not a Republican. That's a major issue right there." Asked how he'd rate Bush, Klinger said, "On a scale of 1 to 10? Let's see, can you go minus? That's how I'd have to rate him. What's he done?"

"He's a do-nothin'," Klinger said. "He hasn't accomplished anything."

"I don't think George W.'s going to be employee of the month as far as the government's concerned," chimed in fellow picketer Pat Rabin, 50, a service advisor. "Actually, I'm pretty conservative. I'm not like my Democratic brethren here" -- meaning Klinger -- "but I'm not impressed either."

Down the road in Ballwin, a suburb that's home to a cluster of big box stores, Karen, a 29-year-old high school teacher who called herself "a diehard Republican," gave Bush high marks as she shopped for baby clothes at Wal-Mart.

"I voted for him, so ... I like some of the things he's doing," she said. "I like the tax cut, but I am kind of concerned about long term, what's going to happen. We're going to probably pay for it some other way. It sounds really good that we're getting this $600 back, but I'm kind of concerned that we'll pay for it later on. I like what he's doing so far with faith-based groups; I think that's a good move for people who are working for nonprofits. So I'm pretty happy right now."

Karen said Bush gets a bad rap from the press, "that he's not intelligent, that he's a Texan. I mean, the press loves to -- no offense, but -- they love to tear him apart. A man can't be that stupid to be a millionaire, and -- he messed up but he also built himself back up. It's very American, a self-made man, so I admire him for that."

But for the most part, asking people to rate Bush's work so far has resulted in a lot of shrugged shoulders. At Ted Drewes Frozen Custard in south St. Louis, an institution rivaled only by the Cardinals in local affections -- and maybe not even by the Cardinals on the hottest days -- engineer Bill McCreary gave the president what appeared to be a sort of gentleman's C, but may not have even been that.

"Let's say on a scale of 1 to 10 I'd give him a 5," McCreary said, noting that because he's a Republican, he probably wouldn't go any lower than 5 no matter what Bush did. "I don't think he's got a real good grip on some of the issues involving foreign policy," McCreary, 38, said, adding that he disagrees with Bush's support for Star Wars.

John Louis, 20, an engineering student also in line for frozen treats, couldn't even muster an opinion on Bush. "Not really," he said. "I don't know what he's been doing so much. All I know is he's staying out of the spotlight, which is more than Clinton ever did. I haven't heard too much about what he's done at all, so I guess that would not rate too well."

Bob Doss, 68, wearing a "Korean War Veteran" baseball cap as he sat amid piles of bric-a-brac in his store, Bob's Attic, on the quaint Cherokee Street Antique Row near the Anheuser-Busch brewery, also said he doesn't think much of, or about, Bush. "It's too soon to judge him, I think," he said as he tried to tame his van's alarm without moving from his seat, pointing the clicker out the open door.

"I'm a Democrat, and I just don't follow him that much," he said, his van finally silenced and the Byrds' "Mr. Tambourine Man" emanating from an unseen but no doubt ancient radio somewhere in the store. Doss said he did follow Clinton, but he's sort of tuned out now.

"I'm gettin' too old to worry about everything."