Wireless Internet access from Metricom was supposed to be the future. But now I've been disconnected, forced back into my offline past. 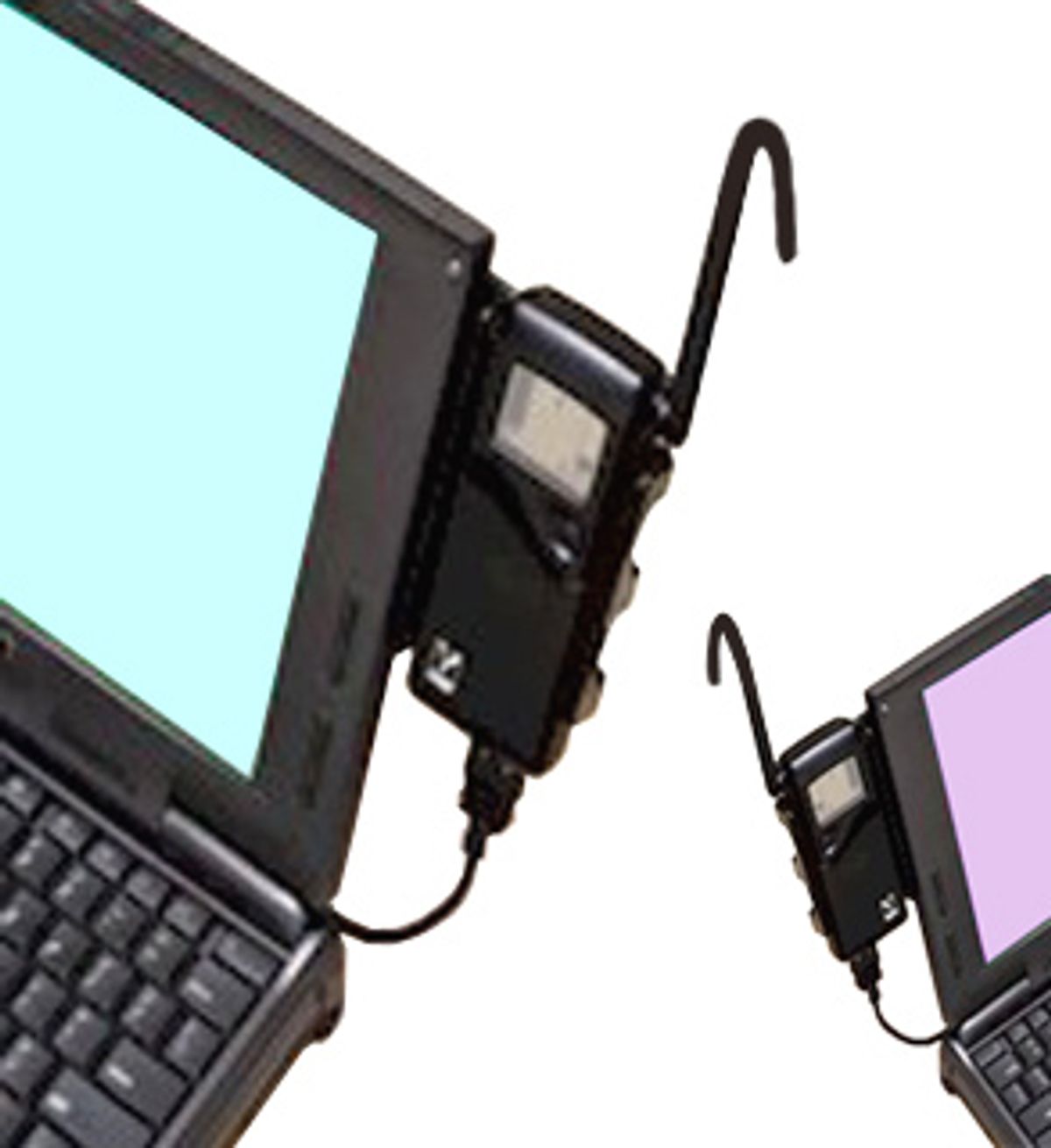 It was like food or oxygen to me, an all-consuming need. I knew what I had before it was gone; that doesn't mean I miss it any less.

It started out as a joyful amusement, a pastime I could even display a sense of decorum and reason toward. Over time, every neuron in my noggin became driven by it, my brain's chemistry kinked as if I were a laboratory rat pressing a lever in a demented experiment.

It drove me to brazenly exhibitionistic episodes in a bookshelf- and box-filled spare room in my mother's house in suburban Washington, D.C., in the back of a speeding Greyhound bus somewhere along a highway in the middle of Nebraska and even atop Seattle's Space Needle.

At home in the Bay Area, I satisfied my lust from the confines of a seat at a crowded movie premiere, in a cab zipping along San Francisco's Geary Street late at night and even idling in midday weekend stop-and-go traffic along the concrete stretch of Interstate 80 at Oakland's MacArthur Maze, where three highways merge into the interstate's last push toward the San Francisco-Oakland Bay Bridge tollbooths.

More recently, I'd made a juvenile game out of it while riding my BART (Bay Area Rapid Transit) train to work in San Francisco. Leaving the system's stations at Lake Merritt or Oakland's city center, I'd board a subway car and wait for it to glide into the open air along raised tracks toward the West Oakland station. As soon as we were out, I'd see if I could take care of business in less than two-and-a-half minutes. By the time I'd grabbed a window seat, whipped it out and begun to aim for the horizon, timing my efforts to reach completion before the train began to sink below the horizon and into the Transbay Tunnel, I was often left a little breathless.

My affair with my Ricochet wireless Internet access, courtesy of Metricom, was the stuff of passion, if not love. But now, since last Friday morning when I read the news, I can see myself more clearly. Like former Wisconsin Sen. Joe McCarthy, I can admit, at long last, that I had no sense of decency. I was in thrall to the demands of my little gray friend with the tiny antenna and the flashing-green LED on top. I can't couch it in the glowing terms of a worthwhile relationship -- you know, wholesome give and take, cuddling, late-night runs for Häagen-Dazs, long walks in the rain and all that. It's been a "monstrous beast breaking its chain" compulsion.

I never gave a thought to any of those Net at your fingertips, cellphone service providers' plans. Wireless access from a Palm, a Handspring or a BlackBerry never literally turned me on. No, the promises of flat-fee, all-you-can-eat bandwidth piped into my laptop were all I ever wanted, the siren song that sent me to sign up some three years ago. Now, post-Metricom, I have the chance at an offline life again. I know I don't have to be online all the time, anywhere, anyhow. But I'm still bereft.

The sickest part of my Ricochet rumba has been the constant questions from onlookers in cafes, public parks, bookstores and meetings, and the skin-crawling ego satisfaction I got from explaining. Endlessly the questions came, from the honestly puzzled to the enviously awed: "What's that on your computer?" "Is that what I think it is?" "No, that's not a PDA or a disk drive," I'd reply smoothly. "It's a Ricochet." "Ah, I've seen the commercials for those," they'd nod.

The smuggest of the self-appointed digerati I met would occasionally challenge me: "How's Metricom's stock doing?" "Hasn't the company had trouble getting people to subscribe?" Always I'd placate these people with their niggling concerns, soothing their minds and putting them down at the same time. "Yes," I'd say. "Marketing's not been the company's long suit, but it's rolled out its network in over a dozen cities. I could go to L.A. and log on, like that."

The technology that turned me loose from a desk and gave me the goods to go online anywhere at any time made me a monster, a smug, egotistical Jekyll who could, without warning, Hyde out in public at any moment.

But now I click on Toaster.net and pore over a list of Bay Area wireless access points for users of the 802.11b protocol, and I grit my teeth when I see that Oakland's sole entry is at Swan's Marketplace, eight blocks away from my one-bedroom apartment near the city's main library and downtown post office. I click on SFLAN, an experimental megabit local area network. I see it covers only San Francisco's Presidio, a former military base. Outwardly I am calm; inside I quail in shock and disbelief.

I've been able to fight free of my wireless habit on some rare occasions. During the belated honeymoon my wife and I took in April 2000, seven months after our marriage, I discovered the firsthand pleasures of Powell's City of Books, the Japanese Garden and the Grotto in Portland, Ore. These were places I wouldn't have given the benefit of my full attention if I'd had a way to tap into something like PDX Wireless. When we reached Seattle, I behaved myself for two days. Then I found myself aboard a monorail, heading toward the Emerald City's most famous landmark, the Space Needle. Once atop it, I had no choice but to turn on the long-suffering PowerBook 540c I had at the time and fire off messages to a couple of friends.

What now? I tell myself that maybe I could relocate to Cambridge, Mass., for the pleasures of Guerrilla.net. Who cares that I don't know a soul there? Maybe I'd love living in London, logging on to Consume.net and becoming some sort of self-styled SMS-text-sending, BBC Radio One-listening broadband junkie nomad. I could have one ear glued to a "mobile" and another listening to Gilles Peterson's "Worldwide" show on an earphone, one foot stalking up the high street and down some twisting lane and the other foot planted firmly in the digital ether. But maybe I won't be happy until I've turned myself into a "gargoyle," one of those gear-toting information junkies from Neal Stephenson's cyberpunk novel "Snow Crash."

I'm whining. I can hear the noise I'm making, and it's insufferable. I mean, I still have DSL at home (thanks to the luck of choosing one of the few broadband providers still solvent) and I came by it without so much as a broken promise about an installation appointment or a serious outage. I could probably wheedle the cost of an Apple AirPort base station and card out of our household budget, follow the directions that came with it and settle for mastery of my one-bedroom apartment domain. If it had to, my AOL dial-up account could handle 99 percent of my online needs. (Just so you understand, that's neither an endorsement nor an easy thing to admit.) If my local cable provider hadn't been such a wuss when I inquired about its plans for my building's aged infrastructure, I might've signed up for a cable modem several months ago. But I'd much rather be speeding along, slipping the surly bonds of telephone-tethered connections and the plugged-in plod of the wired wired life.

There will be no refuge from beasts like the kind I used to be, if you faithfully follow forecasts from wireless-industry firms, or if you believe that "from etiquette experts to senior executives at Microsoft, a growing number of people say wireless Internet access is becoming an annoyance -- a technology that could potentially become more annoying than cell phones or pagers." Even the market's downturn hasn't put a serious crimp in some companies' glowing predictions, like NTT DoCoMo Wireless with its visions of 570 million wireless terminals in Japan alone by 2010.

It's a good thing, I tell myself, that it's coming to an end. If I repeat it enough times, maybe I'll even start to believe it. I knew it couldn't last, this all-access, all-the-time, anywhere-anyplace lifestyle I've been taking for granted. Sure, I paid a price for it -- $30 a month at the beginning; $75 a month in the past nine months -- but the real price is just starting to sink in.

I've been studying my laptop browser's offline page-reading abilities, and feeding myself all kinds of patter about getting to read more books, magazines and newspapers, the way I did before I was on such intimate terms with my Ricochet. I could bike more often, I think. This could be the kick in the pants it will take to get me strapping on my helmet and out on my road bike regularly. I'll just sling my digital camera jauntily over my shoulder and do more photoessays like I've been halfheartedly promising myself (even less convincingly than the excuses I've been making to my wife about exercise routines, if you can believe it).

But would I just be replacing one toy with another? Would it still just be me, praying for one more point-to-point protocol-less pursuit?

I know I should follow my wife's example. Her sense of perspective has been the steady compass in our household. Sure, she's grown to enjoy speedily surfing the dozen sites she visits regularly. But I get the feeling that she can take it or leave it, and that's a feeling that I never chose to learn the meaning of.

In New Yorker cartoonist Bruce Eric Kaplan's recent collection, "No One You Know," there's one particularly funny and moving cartoon. As a loved one leans over a dying man stretched out on his back in bed, the man wonders aloud: "All things considered, I could have done with a little less clean living." Similarly, one way for me to get perspective is to spin the deathbed question a bit: What did I need to do online that had to be done in that moment, and couldn't have waited until a decent hour in front of a desktop computer? I didn't download illegally obtained software or porn; I shared plenty of files via Napster and Gnutella, but I always had to factor in the modem's limits (128 Kbps download, but only 64 Kbps upload -- barely better than dial-up).

In the end, I can't claim it was a necessity. I was never some CEO or a real estate agent whose livelihood depended on up-to-the-minute access to online information. I don't even have heartwarming stories like that of one online forum poster who recalled sitting in a cafe with friends and drinking, downloading song lyrics all the while and singing them aloud well into the evening.

Most of the time, small moments and small-minded motives stand out. I wanted it because I could pay for it and glibly justify it to myself. It was a shallow ego move, meant to bolster my sense of myself as with it and worthy. But damn, I had fun.

George Kelly is a copy editor at Salon.