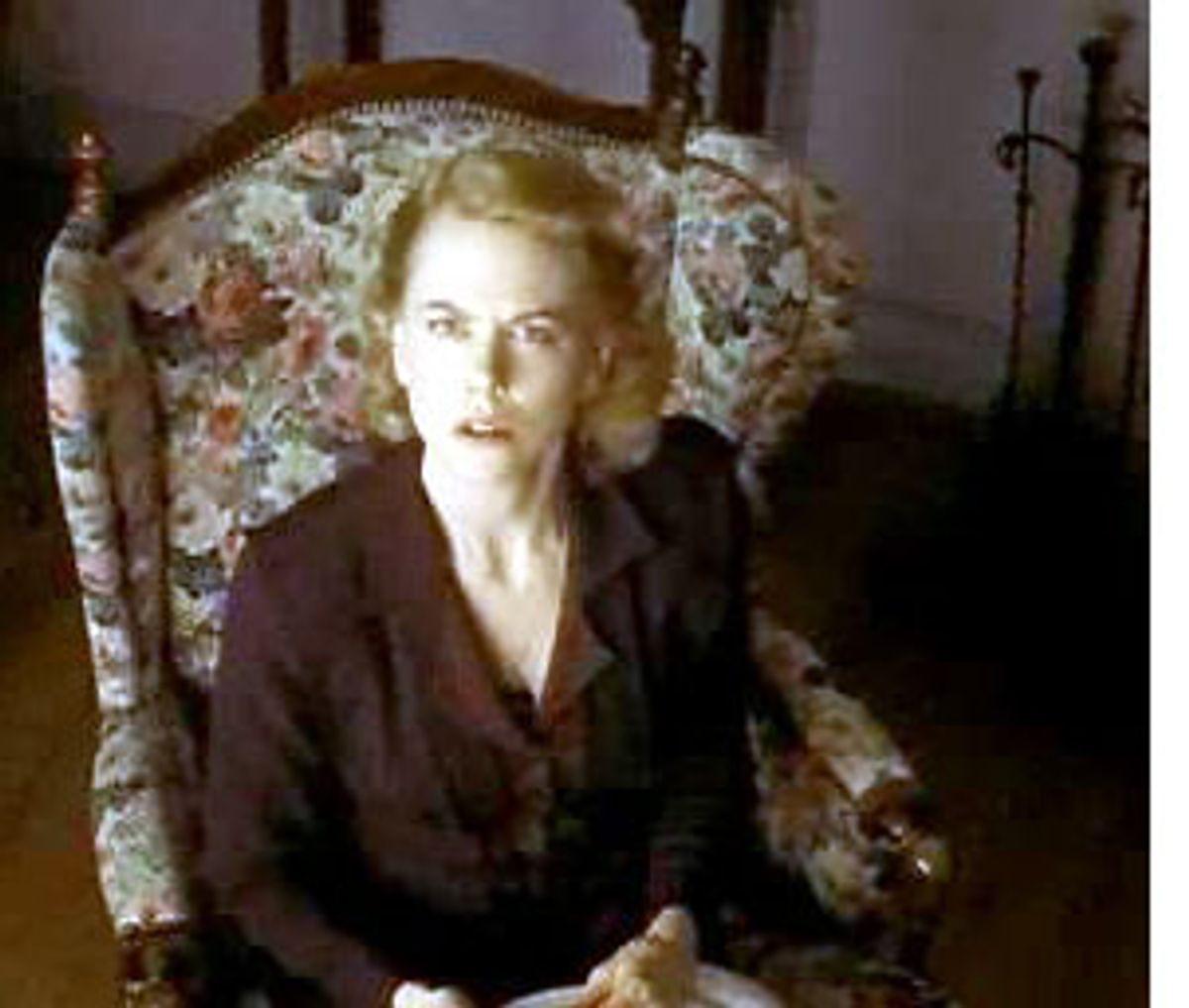 A fastidious little old-dark-house chiller with a dose of venom in its tail, "The Others" might be nothing more than an art-house curiosity without the luminous presence of Nicole Kidman. She certainly looks smashing in a form-fitting burgundy tweed suit and other Grace Kelly-esque 1940s outfits, and Kidman's character is even called Grace, as if to call our attention to the resemblance. But this clever, claustrophobic tale of an overbearing mother hemmed in by forces she doesn't understand isn't much like a Kelly role or a Kelly film. Grace wakes up screaming in the first scene of "The Others," and does not become more relaxed as the story progresses. She may be an icon of elegance, but her elegance is of an especially prudish and repressed kind, and the only place she's a romantic lead is, perhaps, in her own mind.

Whatever one may make of Kidman as a tabloid personality, she has successfully transformed herself into a serious and accomplished actress, and rarely has her natural demeanor of frosty hauteur been put to better use. Grace is a proud aristocrat who finds herself alone with her two children on Jersey, in the British Channel Islands, sometime shortly after World War II. Their rambling Victorian isn't so much sinister as handsome and a little dreary, but it's shrouded by something stranger and more difficult to penetrate than the persistent Channel fog.

Grace's husband has not returned from the war, yet she refuses to admit that he may be dead. Meanwhile she rules her son Nicholas (James Bentley) and daughter Anne (Alakina Mann) with an almost hysterical discipline. They are allergic to sunlight -- or so Grace says, at any rate -- and are kept indoors with the curtains drawn at all hours, reading scripture and studying the lives of the saints. (It's not all that likely that an Englishwoman of Grace's apparent social position would be a Catholic, but never mind.)

Meanwhile Grace's servants have disappeared, without even collecting their wages, and a peculiar trio of new ones has arrived unbidden, before she has even advertised for replacements. Chief among these new servants is Mrs. Mills (the fine Irish actress Fionnula Flanagan), the housekeeper, who explains that she, Mr. Tuttle the gardener (Eric Sykes) and the mute chambermaid Lydia (Elaine Cassidy) worked at the house years earlier and simply decided to stop by.

Like most elements of "The Others," Flanagan's performance is brisk and economical. Mrs. Mills clearly has a secret, but her inscrutable demeanor could be that either of a guardian angel or a demonic trickster, and even if you guess right about the general direction of the plot (which blends Henry James' "Turn of the Screw" with, well, something else that would be too big of a hint) you probably won't figure out her role in it. Suffice it to say that Mrs. Mills knows why Anne, the more persecuted of Grace's children, has begun to encounter other people in the house: a small boy named Victor, an old blind woman who can somehow see her, sometimes a pair of cheerful adults.

Young Spanish writer-director Alejandro Amenábar -- whose previous film, "Open Your Eyes," is now being remade by Cameron Crowe as a vehicle for Tom Cruise, oddly enough -- scarcely wastes a shot, a word or a gesture in building this edifice of masterfully understated menace. Although the cinematography (by Javier Aguirresarobe) is never flamboyant, it provides a number of striking moments, including a sequence when the heavy curtains are pulled back in room after room after room, admitting an ambiguous daylight that illuminates the house but not its story.

"The Others" may not have anything original to say about the human condition, although what it does say, which is that life is lonely and confusing and we may not know ourselves as well as we think we do, rings true enough. But it's an elegantly crafted entertainment, balanced between the psychological and the supernatural, that gets extra credit for not relying on computer effects (there aren't any that I could see) or on pointless Alfred Hitchcock quotations.

Perhaps the most obvious inspirations for "The Others" are Robert Wise's 1963 "The Haunting," still the greatest of all haunted-house films despite the inept 1999 remake, and "The Innocents," Jack Clayton's outstanding 1961 screen adaptation of "Turn of the Screw." But somewhere in the near distance hovers the sexual-supernatural surrealism of Luis Buñuel, the godfather of Spanish cinema. "The Others" is a ghost story of a kind, but it 's also very much like a dream, and Buñuel is the master -- far more than Hitchcock, if you ask me -- of allowing the inner eloquence of those mysterious forms to speak.

Stars will sometimes occasionally play problematic or troubled characters, but what distinguishes Kidman's performance here is its unmistakable and unsettling air of sexual frustration: her tightly fastened collars, her twitches and flushes, her tendency to fly into a rage at the mildest offense. In that sense, the house itself seems to echo Grace's body, unable to stifle its unconscious desires: doors open and close, footsteps patter overhead, the piano begins to play in an empty room.

When Grace tries to walk to the nearby village for help, gets lost in the fog, and blunders into her missing husband Charles (Christopher Eccleston), we have clearly entered some new and possibly more symbolic zone of Amenábar's fictional universe. By this time we know or suspect that something has gone seriously wrong with Grace and her environment, but if she has conjured Charles up out of desire, loneliness, fog and a semi-mystical situation we can hardly blame her. Charles seems real enough, if rather sleepy, detached and sad; he returns home, embraces his children, greets the puzzled servants and even makes love to his wife. But things are nonetheless not quite right. He must return to the war, Charles tells Grace, and shakes his head sadly when she insists the war is over.

There's nothing more I can or should tell you about Charles' secret, or Grace's or Mrs. Mills'. But the secret is out about Amenábar, I hope. This old-fashioned, relentlessly unshowy film, anchored in a performance that may in its eccentric way be the finest of Kidman's career, reminds us of something crucial. The true source of terror and mystery and delight in the movies (and everywhere else) is not digitized goblins or careening point-of-view shots or baroque set design but the shadowy realm of human emotions, the haunted house inside us all.