What happens when you satirize hysteria?

Chris Morris, creator of the "Brass Eye" TV show, ran an episode mocking his country's response to pedophilia. Within hours he was the most hated man in Britain. 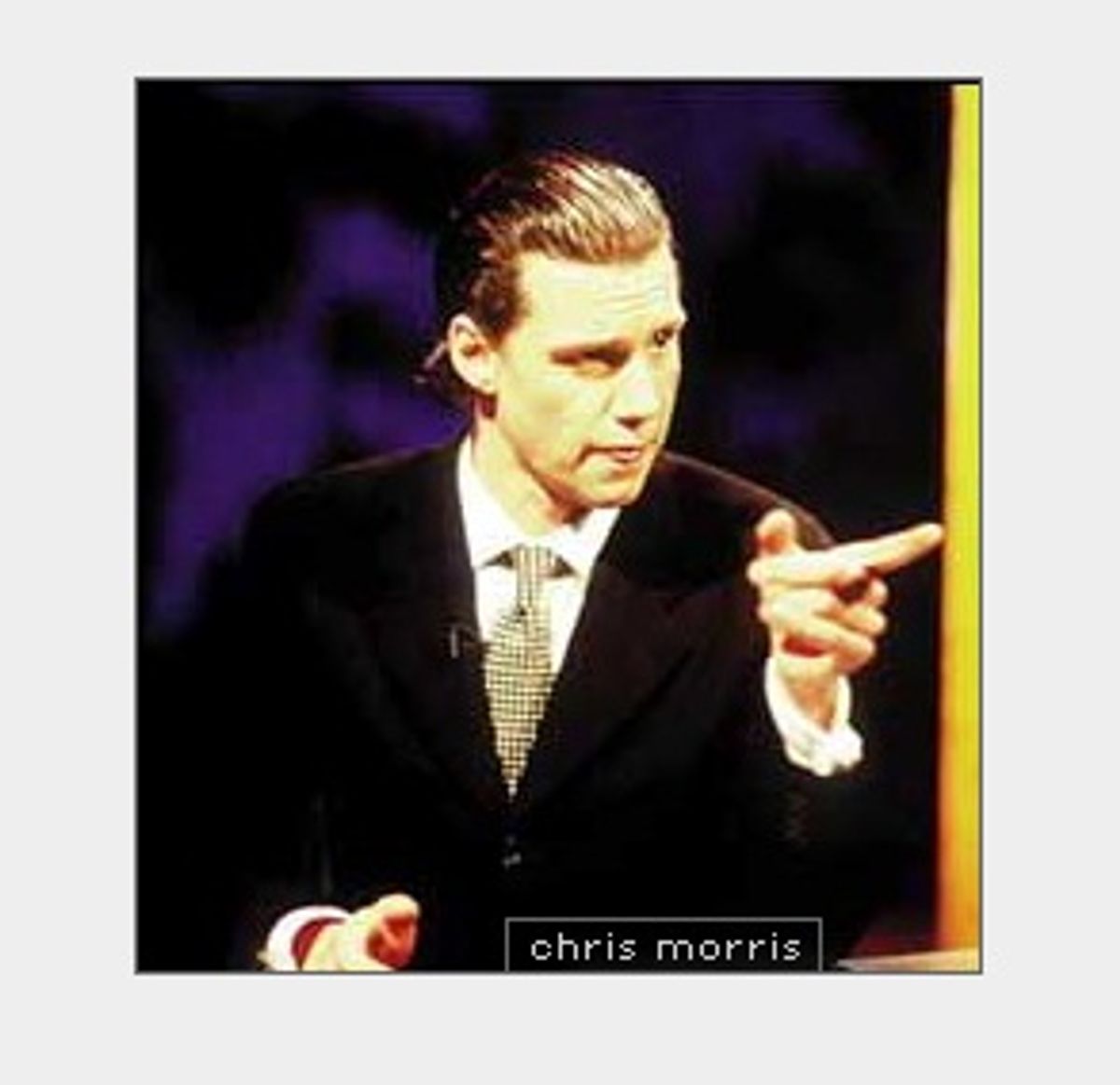 Sick. Depraved. Indescribably evil. Vile. These words have been used a lot in Britain recently.

Following the July 26 broadcast of "Brass Eye," a satirical television program poking fun at the hysterical and sensational way the media deals with pedophilia, politicians, the public and, of course, itself, the media have been queuing up to condemn the program and "Brass Eye" creator Chris Morris.

It was always going to be a controversial program, but nobody, except perhaps Morris himself, could have predicted the deluge of recrimination, condemnation and spluttering indignation that greeted the latest installment of his scabrously funny satire.

Airing on Channel 4, Britain's most progressive and risqué terrestrial channel, "Brass Eye" has developed a reputation over the last few years as the most dangerous show on television.

Morris, a master of disguise and an expert exploiter of hubris, has made a career out of making the great and the good look stupid and vain. But his latest pastiche of an investigative news magazine program dealing with child abuse has made even some of his staunchest supporters feel uncomfortable.

Introducing the offending program with the words "Welcome to Pedogeddon," Morris and his team of writers gleefully filleted every media cliché, mob reaction and hysterical misconception about pedophilia that has stalked Britain and Ireland for the last 18 months.

In that time, a moral panic of gargantuan proportions has swept the land. Last summer in the English coastal town of Portsmouth, egged on by English tabloids running a "name and shame" campaign, mobs of vigilantes roamed the streets like medieval peasants. But instead of pitchforks they carried knuckle dusters and baseball bats, and rather than hunchbacks they were seeking "kiddie fiddlers," who existed only in the minds of the mob.

Dozens of people were wrongly accused, and one man, a pediatrician, had to leave the area after some of the protesters were confused by the term and torched his house. The pediatrician managed to keep his name out of the press, for fear that more crime might follow him. Another pediatrician, 30-year-old Yvette Cloete, had to leave her home in Gwent, South Wales after it was vandalized: Cloete arrived home from work to see the word "paedo" daubed all over her walls. Police say "the astonishing ignorance" of local anti-pedophile protestors forced her out.

Morris, the most determined iconoclast in Britain today, quickly pounced on the hysteria. His show was initially pulled from the schedules after lawyers at Channel 4 received word that musician Phil Collins was threatening to sue. The former Genesis drummer had been roped in to the "Pedogeddon" episode to present an obviously fake public information film.

Called "Nonce Sense" ("nonce" being an English slang term for child abusers), Collins eagerly spouted a barrage of drivel, oblivious to the fact that he was wearing a T-shirt proclaiming himself a "nonce."

Other celebrities were duped as well. One popular London DJ, reading from a cue, described with a straight face how pedophiles were found to have genetic material more in common with crabs than humans. An MTV jock warned children how pedophiles can cause toxic vapors to emerge from the keyboard of a child, making them more susceptible to the "perverts advances," while another celebrity described how new Internet technology allowed pedophiles to send penis-shaped sound waves down the computer to vulnerable children.

It was all obviously hokum, and the kind of leg-pulling that Morris excels at. After all, he was sacked from his first job as a radio announcer after he interrupted a live show to say that the Queen Mother was dead -- she wasn't, but his future at the radio station soon was.

Indeed, the studious-looking young man with the impressively middle-class accent had just been warming up back then. Some of his early radio antics included spontaneous and usually obscene running commentaries over somebody else's live news report, filling the studio with helium just before the newscaster began his broadcast and on one infamous occasion, while working with Great London Radio, he spliced a tape of the British queen in which she appeared to be giving a tour of Buckingham Palace saying, "and this is the room in which my father used to service men."

Back at "Brass Eye," the decision was made to air the pedophilia episode with no cuts once the threat of legal action from Collins began to dissipate. In the days leading up to the pedophilia episode, the print media responded to warnings of impending offensive material with a preemptive strike against the man they fear more than any other.

Morris is often compared to agit-prop comedians like Michael Moore and Mark Thomas, but while they deal with the political, Morris is far more interested in the social. A tall, handsome 38-year-old father of two, he doesn't speak to the media and cleverly timed his summer holiday in the South of France for the day after the show aired. It was a wise decision, because within hours of the first transmission, he had become the most hated man in Britain.

Previous episodes of "Brass Eye" had mostly appealed to a relatively small audience. Predominantly ABC1, the listeners tended to be young, media-literate and hip to the "in" jokes that come with a speed usually reserved for a swarm of flies hitting a speeding truck's windscreen.

But the hunt for pedophiles has become a virtual national sport, and newspapers, celebrities and members of the public are in a constant battle to see who hates pedophilia the most. It's no longer enough in tabloid Britain to abhor the physical, emotional or sexual abuse of children. If you don't think pedophiles should be hanged then you're accused of being soft on crime. If you don't think they should be castrated without anesthetic before being hanged, you run the risk of being condemned as a liberal, the worst insult imaginable in Britian's current climate of spittle-flecked hysteria.

It takes courage to swim against this particular tide in modern Britain and the sight of Morris dressed as Eminem with a baby doll attached by the mouth to his crotch, the news that child-killer Sidney Cooke had been blasted into space with only an 8-year-old child for company and the interview with a child actor posing as a victim of sexual abuse sent his critics into paroxysms of splenetic rage.

The day after the show was aired, Beverly Hughes, a member of the ruling Labour government went on national radio to condemn the program and denounce Morris. "Indescribably sick," she called the episode, before admitting that she hadn't actually seen it. She defended her precarious position by saying, "I don't think I ever want to see something as horrible as that and I don't understand anyone who would."

This rather limp justification was soon followed by a spate of press releases, radio interviews and attention-grabbing stunts by politicians from all parties as they jostled to see who could be the most publicly outraged.

But most worrying was the decision by Culture Secretary Tessa Jowell to go to the Independent Television Commission, British television's regulatory body, and demand a change in their methods. It was indicative of a Labour government which, rather than provide the liberal alternative after years of Conservative Party misrule, has instead proved itself to be as staunchly Victorian on social issues as its predecessors.

The ITC politely told Jowell to mind her own business, and when Channel 4 news interviewed her, the anchor suggested that she and her colleagues must "feel like idiots."

The program was trumpeted by the right wing as an example of what happens when you allow college-educated liberals unrestrained access to television. The News of the World, The Daily Mail and a host of other publications even accused Morris of actively promoting pedophilia.

In the middle of the furor, a nonplussed David Quantick, one of the writers on the show, was persuaded to grant interviews. He pointed out that as that episode of "Brass Eye" was aiming to satirize media overreaction on the issue and spark a debate, they had obviously succeeded. "I think a lot of people complained because it just had the word 'Paedophilia' in the title and that a lot of complaints seemed to be related to a program that didn't go out," he said.

"It wasn't a show mocking victims of pedophilia. It was a show about media attitudes to pedophilia and the way the media apparently exploits pedophilia." This merely provided a further cue for the critics, who promptly designed banner headlines telling their readers that the creators were "unrepentant" and "smug."

At least one writer is believed to have withdrawn his name from the list of "Brass Eye's" credits before the show was aired, and it was hard not to look at some parts of the show through knitted fingers, dreading what was going to come next. Which, one suspects, is exactly what Morris wanted. After all, it was no surprise and no fun to have right-wing author Freddy Forsythe condemn Morris, but one imagines he got a real kick out of the bleeding heart liberal brigade balking at the subject matter.

In previous episodes, Morris has dealt with drugs, where he persuaded celebrities to tell outrageous stories about the dangers of a fictitious new drug called "cake." The tablets were size of a sombrero and one duped politician even raised the deadly specter of the new drug in the House of Commons.

Morris has also dealt with animal-rights issues, crime and religion -- all emotive subjects where opinions differ and no quarter is sought or given. Each time he has managed to make each topic hilarious, vicious and completely on the money.

With "Pedogeddon," however, the laughs were more sparse than usual. Of course, one can point out that devoting an entire satirical show to the subject of pedophilia is a little like looking at a dog walking on two legs. It's not important whether the dog does it well or not, it's just refreshing to see it try.

But there were moments of inspiration. For example, Morris as the newscaster who is upset by the pedophile -- restrained in stocks, naturally -- who admits that he just doesn't fancy his son. Or the grainy, undercover, black and white footage of a sinister building, with the whispered voice-over, "this clever pedophile has disguised himself as a ... school." Or the live newscast from outside a prison where a braying mob, encouraged by the reporter, break into the cell of a pedophile and set fire to him live on camera.

Predictably, these were among the scenes which caused most of the outrage, simply because they were virtually identical to real footage we have seen on our television screens for the last year and a half. Those Portsmouth protesters who carried placards saying "hanging's too good for them" and burned people out of their homes condemn anyone who has criticized them, and anyone who dares to question their actions is frequently painted in some way as a defender of pedophiles.

But right in the middle of the "Brass Eye" storm came a new spin on the story, one that caught everybody off guard. As a child, Morris had attended a minor English public school which was the center of a child sex abuse scandal that saw the headmaster jailed and several senior staff fired.

Two years ago Morris was asked if he remembered any abuse while there. He replied, "I remember all sorts of degradation going on with other boys and teachers."

But to the chagrin of some of his fellow students who testified, Morris refused to go to court. It suggests some things are just too daunting even for Chris Morris.

Ian O'Doherty writes for the Evening Herald in Dublin, Ireland.