Her best singles represent the kind of quality craftsmanship that made us listen to the radio in the first place. 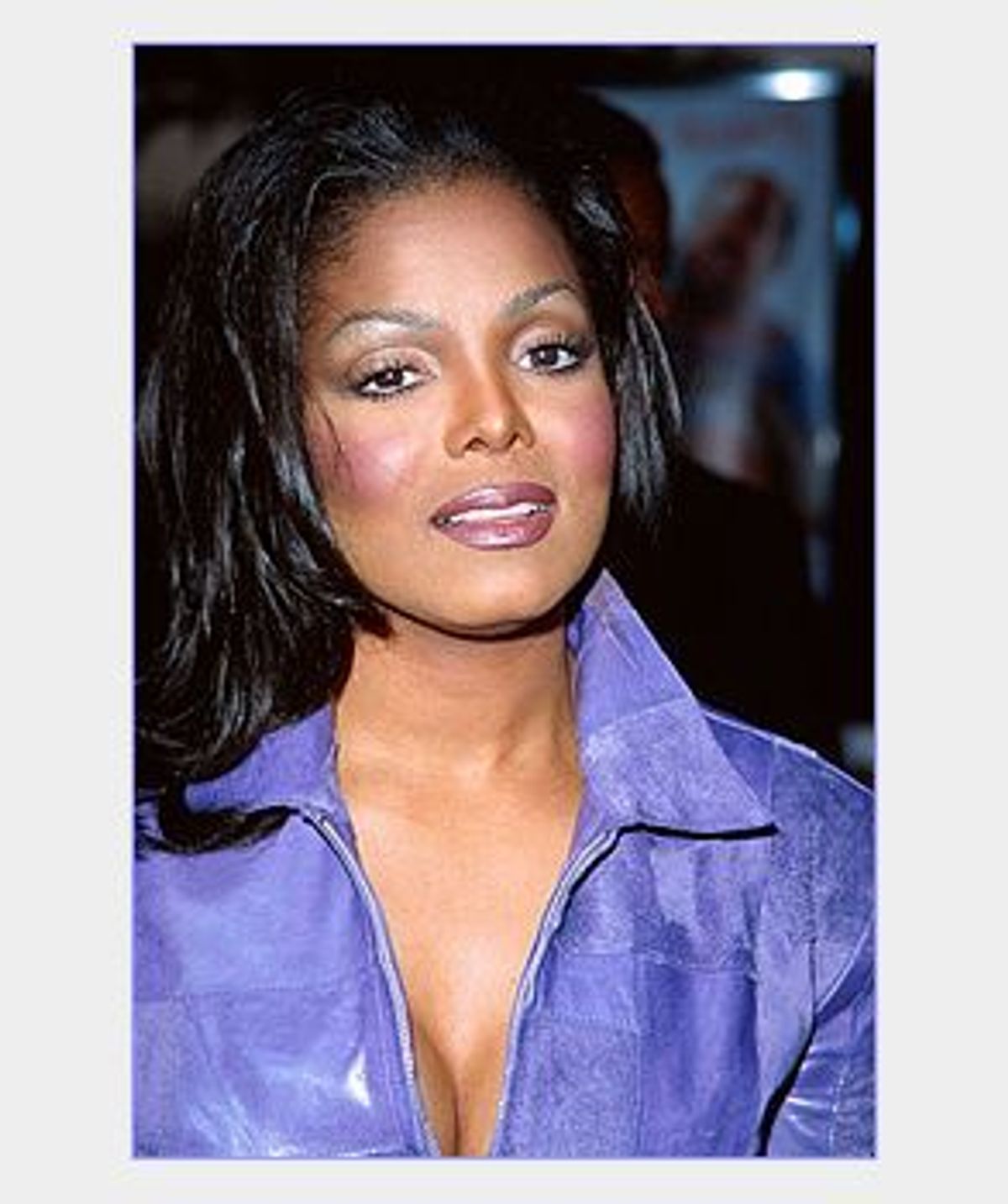 These are dark days for pop radio. Calculation rules. TV shows like "Making the Band" and "Popstars" celebrate the corporate Meccano set that is current pop culture; the deluge of boy bands and Britney leaves us grateful even for a bloated and self-indulgent remake of "Lady Marmalade" if it can at least remind us of an inspired original. Pop fans wait for the dawn to break -- and in the meantime, thank the radio gods for Janet Jackson.

For 15 years, spanning the eras from Journey to Destiny's Child, Janet Jackson has frequently provided the best reason to turn on the radio -- although, admittedly, the case for opening a good book is usually a lot stronger. Top 40 has always been more or less a sausage factory. Between the occasional bursts of true genius that change the prevailing flavor of pop, journeyman producers and performers rush in to fill the gaps with sawdust imitations of the real joy. Much of pop history has consisted of marking time until the next big thing.

Janet Jackson is not, and never has been, the next big thing. Working with producers/songwriters Jimmy Jam and Terry Lewis, Jackson could be fairly described as yet another sausage merchant. But Janet's gourmet links are so fine. Since her 1986 breakthrough album "Control," whatever Janet Jackson song happened to be on the radio at any given time was usually the song you wanted to hear. At their best, her singles represent the kind of quality craftsmanship that made us listen to the radio in the first place -- the kind of songs that make you swallow a stream of crap from O-Town and 112 because the next song might just be "Someone to Call My Lover."

That hit from Jackson's latest album, "All for You," demonstrates much of what makes her records stand out from the radio dross. Opening with a guitar sample from America's "Ventura Highway," the producers demonstrate how such samples ought to be used -- as filigree on an original work, rather than the basis for a Puff Daddy-style karaoke record.

As for the singer, she is dreaming aloud about the lover she seeks: "Maybe we'll meet in a bar/He'll drive a funky car/Maybe we'll meet in a club ... " A bar? A club? Hardly a Cinderella scenario. And yet there is a quality in Jackson's voice -- the kind of sweet yearning Diana Ross brought to the Supremes -- that culminates at the end of each verse as she sings a wistful "Maybe!" Somehow, Jackson makes a tale of club-hopping sound as innocent as "Someday My Prince Will Come."

"Innocent" is not a word that has been attached to Janet Jackson's music of late -- ever since 1993's "Janet" album, her lyrics have displayed startling sexual frankness. And yet while her songs have often been raunchier than Madonna's, Jackson's image retains a certain wholesome quality. Perhaps it's because of the inherent sweetness of her voice, or perhaps it's the power of first impressions. Aside from some early performances with her famous siblings, Janet's first real introduction to the public came via roles on the sitcom "Good Times," in the late '70s, and then "Diff'rent Strokes," in the early '80s. That initial clean-cut image has subsequently allowed her to explore the subject of sexual pleasure as the natural province of a mature young woman.

Then too, the public may cut Janet some slack because, as she has admitted in interviews: "People see me as the 'normal one.'" A relatively uncomplicated pop career is not what people have come to expect from the offspring of the most famous showbiz clan ever to come out of Gary, Ind.

Born May 16, 1966, Janet is the youngest of Joe and Katherine Jackson's nine wunderkinds. The Jackson 5 were already stars when she was just a child, and Janet was spared the poverty of the family's early years. After beginning her acting career, Jackson released her self-titled debut LP in 1982. She was only 16. The record drew little attention, and 1984's "Dream Street" didn't do much better. Meanwhile, brother Michael was dominating the charts in a way that few artists have ever accomplished.

Janet's first real attempt to break away from the tight strictures of the Jackson clan was personal, not professional. At 18, she eloped with singer James Debarge for a quickie marriage that was just as quickly annulled, sending her back to the family home in Los Angeles. Her next breakaway would be more successful; it took her not to the altar, but to Minneapolis.

In 1985 A&M Records executive John McClain suggested that Janet work with Jimmy Jam and Terry Lewis, two aspiring producers who had until recently been members of the raucous funk outfit the Time. When Janet's father, still her manager then, heard that the duo was based in Prince's hometown, he bristled. According to writer David Ritz, father Joe warned the two men: "I don't want my daughter sounding like Prince."

And that, more or less, was the end of Joe Jackson's professional hold over his daughter. Because sounding like Prince was something eager young Janet could definitely get behind. The resulting LP, "Control," was a statement of independence packed with insolent hits like "What Have You Done for Me Lately" and "Nasty." In the fall of '86, "When I Think of You" not only gave Janet her first No. 1 single, it provided a blueprint for subsequent explosions of pop ecstasy like 1989's "Escapade" and 1998's "Together Again." Sausages don't get much tastier than those.

Reworking a successful formula need not lead to tedium. Motown was perhaps the greatest sausage factory of all, with songwriters like the Holland-Dozier-Holland team recycling every hit into one or more rhythmic clones. With her own team of Jam and Lewis, Janet Jackson would continue to hone her craft through the '90s, experiencing increasing levels of success. But listen again to "When I Think of You," and the essential elements of Janet Jackson's style are already there, fully formed.

Many of Jackson's records feature a postmodern "in-studio" theme, with Janet simultaneously performing the song and commenting on the playback. ("Didn't quite hit the note," she mutters in 1995's "Runaway"; "That's the end?" she squawks at the abrupt finish of "Miss You Much.") A more important element is the reliable presence of actual melody. These tunes have hooks. Take away the melodic edge, the lilting style her team lends to these songs, and what would you have? A famous name and a state-of-the-art studio sound wrapped around an empty, aimless groove. You'd have Jennifer Lopez. J-Lo's records deserve their very own adjective: per-funk-tory. Listen to a few of them back to back and see if you don't start scanning the dial for a little dose of the Janet antidote.

Between 1986 and 1997, Jackson's four albums of original material -- "Control," "Rhythm Nation 1814," "Janet" and "The Velvet Rope" -- all hit No. 1 on the Billboard album chart. The 1995 hits package "Design of a Decade," featuring two new tracks, hit the Top 5. "All for You," Jackson's latest opus (by now credited only to "Janet"), proved to be her fastest seller yet, moving more than 605,000 copies in its first week last spring. The title track set a new standard at Radio & Records magazine by being added to every applicable radio station playlist in its first week, loping easily to No. 1 shortly thereafter. Jackson has also maintained a screen career with performances in John Singleton's "Poetic Justice" and the Eddie Murphy vehicle "The Nutty Professor II." Meanwhile her concert tours, beginning with her first in 1990, have been renowned for lavish production values and meticulous choreography. When you ponder the magnitude of her brother Michael's '80s and early '90s success, it's almost incredible to think that, as of now, Janet is the biggest star in the Jackson family. Few performers have ever had to emerge from such a formidable shadow -- a shadow that includes the strong taint of family eccentricity.

When a Jackson pops up on the radio today it's generally either Janet as a singer or Michael as a punch line. Years after his last chart appearance, Michael is still the butt of morning DJs' jokes about plastic surgery, hyperbaric chambers, questionable pajama parties, etc. His solo career has charted a very different course from Janet's (or almost anyone's for that matter) -- hers characteristically sure and steady, his wild and erratic. You can't become the King of Pop without also making yourself a target for regicides, and the backlash against Michaelmania has threatened to make him a ghost of pop past. His carefully staged reemergence begins this fall with his 30th anniversary concerts at Madison Square Garden Sept. 7 and 10, featuring all-star guests and a handful of brothers. But never before has Michael faced the real possibility of eclipse by a sibling.

In interviews, Janet has confessed to a sense of family guilt about her relative success at a time when other Jacksons are consigned to oldies stations (and in LaToya's case, back issues of Playboy). Likewise, reports have hinted at tension within the family -- Janet will not be among those appearing at Michael's big comeback show, a fact that she attributes to her undeniably busy touring schedule.

But regardless of whether Janet has put distance between herself and her tabloid-happy clan, she has at least tried diligently to stay out of the same supermarket publications. In that she has been largely successful, although at this level of success, it seems, no one escapes unscathed. It was only when she filed for divorce last year that Janet's secret 1991 marriage to Rene Elizondo Jr. was revealed -- a notably successful act of espionage for a woman so in the public spotlight (note to secretive celebs: Marry a key grip). Elizondo has since filed suit against his former wife for a portion of her royalties, allegedly owed to him for production work.

Aside from this marital unpleasantness, though, the only risqué thing about Jackson is her lyrics and her cheerful admission that they do reflect a healthy sexual appetite. (There is also the matter of her eye-popping promotional campaigns. In 1998, one sensual Jackson billboard was removed from a British motorway when drivers began plowing into hedgerows and each other as they gawked.)

There has rarely been a time when pop radio listeners could not legitimately complain about the dreck being dumped upon them in 3- and 4-minute piles. But the great ones stand out all the more in creatively fallow times. Janet Jackson may well be the beneficiary of contemporary pop's Lilliputian landscape. Her singles are admittedly a hit-and-miss affair -- she can sometimes descend too far into pop convention and turn out the same kind of mediocrity as her less-talented peers. More often, though, a Janet Jackson song on the radio is a deluxe buffet set up on a compost heap. Pass the sauerkraut.