Shameless gore and snappy repartee: Throw in some babes and you've got the new John Carpenter movie. 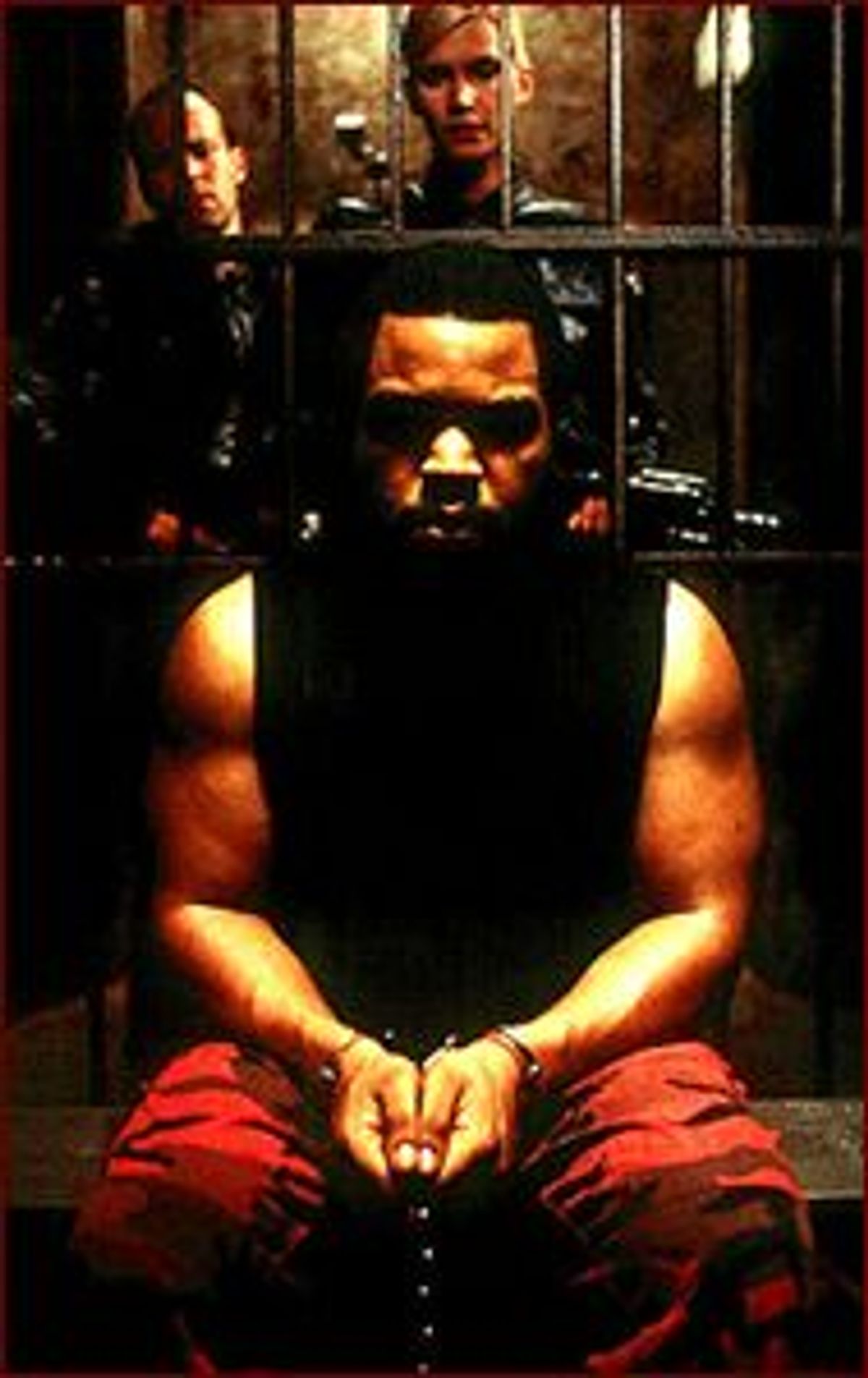 Summer is winding down, and if your needs for pointless and violent entertainment have not been sufficiently met (and how could they have been?) then I commend you to the care of John Carpenter. There's something comforting and even sweet about the fact that Carpenter's style of grade-D exploitation cinema, with its babes, its pyrotechnics, its cast of extras who seem to have been wandering the wilderness since the wrap party for "Road Warrior," still seems to be thriving, or at least existing, in the age of faceless digital spectacle.

Mind you, "Ghosts of Mars" is not a good movie by any reasonable standard; it's not one of Carpenter's half-accidental triumphs, like the original "Halloween" or "Escape From New York" or his memorable 1982 remake of "The Thing." It's not even "They Live" -- the finest Marxist science-fiction film ever to feature a professional wrestler -- in which Rowdy Roddy Piper discovers that the yuppie revolution of the '80s is actually an alien invasion (still an unrefuted hypothesis as far as I'm concerned).

But, hey, this is still a ghost story set on Mars. It mixes the claustrophobic atmosphere of "Alien" with the joie de vivre of "The Texas Chainsaw Massacre" and stirs the brew into an old-fashioned frontier western in which the posse of good guys (or at least humans) has to shoot its way out of town not once but twice. It's got severed heads on pikes. It's got a bunch of bloodthirsty barbarians with kinky piercings, pointed teeth and face paint who look like the band members kicked out by Marilyn Manson for being too old and weird. It's got Pam Grier as a lesbian Martian cop. It's got the line, "What happens if we blow up the nuclear power plant? There'd be a big explosion, right?" So there's really nothing to complain about.

During the opening credits, we learn that it's the 22nd century and the Red Planet has been mostly "terraformed" (i.e., made Earth-like). As usual with Carpenter's movies, his mock-scientific jargon has an unintentionally humorous flavor. One graphic superimposed on the Martian surface informs us, "Population: 640,000." The next, "Society: Matriarchal." And indeed it's true; when Martian Police Lt. Melanie Ballard (Natasha Henstridge) returns from a dangerous mission handcuffed to her bed aboard an otherwise unoccupied supply train, she must explain herself before a stern, matronly inquisitor.

Henstridge certainly possesses the proper Nordic-princess physique to be a Carpenter heroine, and if she still isn't much of an actor she seems to have fun here in a way she hasn't since the "Species" films. Perhaps she has decided to embrace the honorable career of B-movie babe; at any rate she revels in the character of this hard-ass bitch with a drug problem, who must fend off the lecherous attentions of fellow officer Jericho (Jason Statham) and match wits with a dangerous convict named "Desolation" Williams (Ice Cube).

Carpenter's script (written with Larry Sulkis) is hackneyed even by his standards, but it has the requisite amount of zingers. When cautioned about drugs by her superior, Braddock (Grier), Ballard lies, "Don't worry, Commander, I'm as straight as they come." Batting her cat eyes, Braddock purrs, "Mm. Such a pity." Ballard tells Jericho, "Maybe I'd sleep with you if you were the last man on Earth. But we're not on Earth." And I suspect the whole matriarchal angle is present in the story so that Cube, as Williams, can tell Ballard: "There's a thin line between a cop and a crook. You just got the Woman behind your bullshit."

As Ballard explains to the matriarchy, she, Braddock, Jericho and various other characters who get sliced into lunch meat early enough that they don't make much impression were sent through the not-quite-breathable Martian murk to a remote mining camp to retrieve Williams, who's wanted for all sorts of nefarious crimes. All is not well at Shining Canyon, however; except for Desolation and the other prisoners, the human residents have been strung upside down and decapitated. To make the point that this is a creepy situation, we get lots of creepy closeups of blood-stained knives and scissors stuck in the walls.

Desolation is just another lazy but dangerous teddy-bear role for Cube, but he's become the master of the form. When Ballard asks him if he expects them to believe that he's innocent of all this, he gives her that "I can't believe how dumb you white people are" stare. "I didn't say I was innocent," he snorts. "I said I didn't kill nobody." Of course, when the whole gang (including some of Desolation's thug-life pals who show up to rescue him) is besieged by miners whose bodies have been taken over by ancient Martian warrior spirits, or possibly by self-mutilating modern primitives straight out of the late-'80s San Francisco club scene, Williams turns out to be a stand-up guy after his own fashion.

One of Carpenter's endearing, or perhaps irritating, qualities is his desire to be a better filmmaker than he actually is. Even besides the Henstridge framing device, "Ghosts of Mars" skips backward and forward in time a lot, telling its story in overlapping narrative increments and often moving from one scene to the next via fancy wipes or dissolves. Ballard and Jericho will enter a room not in a continuous take but in a series of cinematic bunny hops, somewhat reminiscent of the technique developed a decade ago on "Homicide: Life on the Streets."

These fake Godard-isms don't really add anything, and anyway the last half-hour devolves into incoherent gunfire, beheadings and explosions, just as it should. Maybe the point of such pseudo-artistry is to remind us that Carpenter really likes his movies, trash though they may be. I like them too, sort of. I mean, it might be nice if "Ghosts of Mars" had more to offer than snappy repartee and shameless gore, or if it could borrow a little narrative tension from its Alien Chain Saw forebears (or from last year's "Pitch Black," still the horror/sci-fi champ of the new century). It might even be nice if Carpenter could actually end his films, instead of more or less asking the audience, "Hey, we're all set for a sequel -- whaddya think?" But I guess John Carpenter the careless purveyor of slime and hokum is the only John Carpenter we've got, and that's better than none at all.