At the 131st Congress of Correction, the incarceration industry puts on a bizarre show. From execution jokes to soap -- without a rope -- it's a great place for networking. 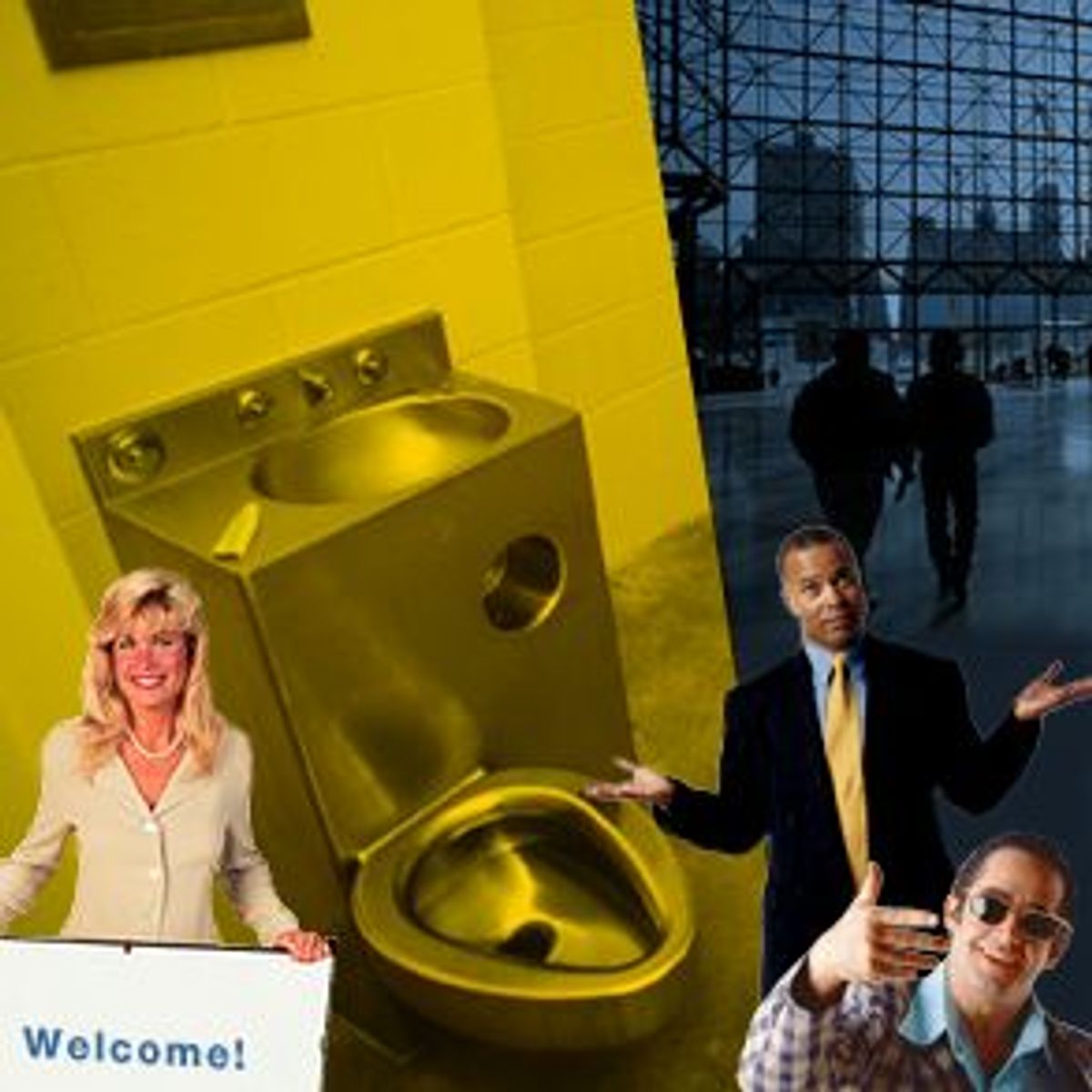 It's a hundred degrees in downtown Philly and the Pennsylvania Convention Center is on fire. But it has nothing to do with the weather, or with the electric fence display the Gallagher Security rep claims is "more interesting when it's on."

It has nothing to do with the burnout that can drive thin-skinned prison staff to suicide. And it has nothing to do with the protesters outside waving signs saying "Teach by Example," or with the grubby puppeteers across town, coming off yet another Mumia rally and gearing up for the next day's interruption of the American Correctional Association (ACA) meeting -- an act that will get 12 of their members arrested and incite one suited gentleman to say, "If they looked like you and me, maybe I'd listen."

No, the Pennsylvania Convention Center is on fire with the thrill of cheesy freebies, business card drawings and the 2001 Oldsmobile Silhouette some lucky prison worker is about to drive away in.

It won't be Vince Scott, a friendly rep for a Hackensack hardware firm who's busy taking down his concession. Unlike those giddily swarming the glorified paddy wagon, Scott hardly notices the grand-prize dash. Asked if he noticed the protesters perched outside the convention center for the last couple days, he dismisses them with similar lack of interest.

"They don't pertain to us," he says, adding, "We've been doing this for a few years." Protesters are an ultimately harmless side effect of doing prison business.

Besides, he says, "We're from New York, so it doesn't scare us."

Welcome to Philadelphia, cradle of liberty, birthplace of Botany 500, homeland to Hall and Oates. And a damn steamy place, besides. Especially in mid-August, when some 5,000 prison workers, vendors, groupies and their respective families chose to hold their 131st Congress of Correction. One of two conventions the American Correctional Association holds each year, it's an unrivaled networking and deal-making opportunity even for those whose business may on the surface seem unrelated to that of incarceration.

With such commercial exhibitors as Romaine Companies (makers of the ever-popular Shower Delicer enzyme shampoo), Correctional Cable TV, GlaxoSmithKline, "Soft Sheen" black hair care, Lexis-Nexis, Humane Restraint Inc., Verizon, TRW, Rit dye and Nescafé, and information tables from organizations such as the NRA, Habitat for Humanity, Alcoholics Anonymous, Narcotics Anonymous and United Prison Ministries, the trade show is easily the Congress at its most surreal. But that's hardly the highlight of this, the largest gathering of corrections personnel you'll see outside of a George Bush fundraiser.

For those who just can't leave work behind, there are enlightening side trips to Eastern State's modern-day descendants, the Curran-Fromhold Correctional Facility (named for two guards murdered at the city's now-defunct Holmesburg Prison, once known for subjecting inmates to gruesome medical experiments, now better known as the setting for the prison riot in "Up Close and Personal"), the Philadelphia Federal Detention Center ("located within the historic district" and "bound on two sides by buildings listed on the Historic Register," brags the brochure) and the State Correctional Institution at Chester (proudly, the state's first tobacco-free facility).

And then there's the Corrections Film Festival, where video entries include first-place winners "Killing Time: HIV/AIDS in Prison," from the Alaska Department of Corrections, and "A Strategy to Increase HIV/AIDS Medication Adherence in Correctional Settings," from the Albany Medical Center's AIDS Program. (Runners-up include "The Wildest Show in the South," about the famous inmate rodeos at Louisiana's Angola state pen, and the scintillating short titled "The Touch," a "Justice Files"-type dramatization of the true story of a corrections officer who goes to jail after a female inmate seduces him -- watch out, Susan Smith!)

The Congress of Correction opens officially in a Marriott ballroom. Though few of those assembled know what to expect from the evening's headliners -- a Washington revue called the Capitol Steps -- the convention comes around but twice a year and the wine at dinner has everyone ready for a little much-needed corrections-style levity. "As a departure from the usual," says ACA president-elect Charles Kehoe, "we'll have a little fun tonight."

Kehoe introduces this session's theme: "Our principles: yesterday, today, tomorrow," and wraps it up with a tidy Mark Twain quote: "Always do right." Which is a good thing, considering how many of those assembled tend to lean in that direction naturally. And given that inclination, it's puzzling that the somewhat left-leaning Capitol Steps are the evening's entertainment. Apparently no one told them to lay off the execution jokes.

Question: What's a compassionate conservative? Answer: Someone who thinks the electric chair should be a La-Z-Boy.

The crowd howls with uncharacteristic abandon.

The crusty liberal theme carries through to the next morning's keynote speech by former New York Mayor Ed Koch, who's quick to add his unsolicited two cents about mandatory minimum sentences -- particularly those that send more blacks and Hispanics to jail for small amounts of crack than white folks for much larger quantities of powdered coke. They're "terribly unfair," he declares between digs at current New York politics.

Then, advocating the clearing of felony records for ex-cons who deserve a second chance, he adds, "Prison is not for torture. It's in our interest that inmates don't become recidivists."

And it's not being "soft on crime," either. It's being selfish. "It's about protecting ourselves," by getting former prisoners off the streets and into decent jobs.

Koch goes on to trash-talk Giuliani. ("He's not a racist; he's mean to everybody.") And even poor, dead Mother Theresa. (She paid him an impromptu visit on his sickbed, then shook him down for two New York City parking permits. No word on whether she got the permits.)

But don't get the wrong idea. The Congress of Correction isn't just about blowing off six months of pent-up prison-generated steam. It's also about sharing new findings and ideas -- or rather, those hated professional-development seminars that all but the geekiest conventioneers skip.

I arrive at the "Ethical and Legal Aspects of Suicide" seminar just in time to hear Mike Pinson of the Arlington County Sheriff's Office in Virginia's D.C. suburbs explain, "It used to be we handcuffed the offender to a bench," adding that now there are more humanitarian ways to keep a desperate man down -- thanks largely to the progressive structure of his new jail.

Of course, he adds, if an inmate really wants to off himself, he'll find a way to do it. Pinson tells the story of one poor schlump placed alone in an empty room and stripped bare, as is the custom with suicidal inmates. The guy tried to asphyxiate himself by making a rope of sheets, then tying one end around his neck and the other around his foot. He succeeded only in getting his sheets taken away, in addition to his clothing.

The point being, Pinson says, that someone found the man in time. Supervision, after all, is the key to preventing suicide. Besides, with more supervision comes more freedom and simple comforts. Take toilets, for example. Real toilets -- not those seatless stainless steel jobs found in most prison cells -- may not seem like such a luxury, but a little goes a long way behind bars.

"If you've got someone who's depressed," says Pinson, "that individual will feel better using a real toilet rather than squatting over a hole in the floor. It's a human dignity issue."

Of course, a real toilet requires direct supervision, and it's hard to say which is more dignified -- taking a dump in a hole, or having someone watch you mount the bowl.

With the sunrise Sunday comes another cheery topic: "Unique Health Care Needs: Caring for Older Offenders in Prisons and Jails," which opens with some stark news from the Texas Department of Criminal Justice (TDCJ): While the state's general inmate population has stabilized, the number of elderly inmates will soon outnumber the rest of the prison population by a projected 122 percent. This is due not just to higher penalties for repeat offenses, but for the same reason Social Security may soon be bankrupt: those pesky, resource-hogging baby boomers.

But before my mind can entertain more suicidal thoughts, another audience member beats me to the punch with a question about TDCJ's "right-to-die" policy. Another one, apparently eager to redefine "extraordinary means," asks how security staff know whether to revive an inmate who has collapsed or stopped breathing.

"We do CPR on everybody," goes the answer. Though it may soon be too late for this crowd.

Which is why many of us also show up for a session benignly titled "Living Well So Your Job Doesn't Kill You." Here, a cute, young Ph.D. from the Federal Bureau of Prisons lectures about nutrition, exercise and stress management. Like a grade school teacher, she's equipped with a packet of handouts on the food pyramid and a PowerPoint presentation to echo her lecture.

The first slide hits the screen ("There can't be a crisis next week. My schedule is already full." -- Henry Kissinger) as she discusses the "suicide epidemic" among police officers. She explains biofeedback like a latter-day Wayne Dyer, and dons a "biodot" (like a stick-on mood ring) to check her stress level and attempt to lower it through mind control.

The convention-wearied crowd asks tepid questions about caffeine's less pleasant effects and the amount of sugar in a can of Coke. And as she lists the warning signs of job burnout (pessimism, increased dissatisfaction or joylessness, a desire to escape, forgetfulness, increased temper, martyrdom, feeling indispensable, loss of interest in work and so on), they check off each in turn.

By the Congress of Correction's last afternoon, all comers -- protesters included -- are clearly pooped. After days of escalating confrontation with conventioneers, and ultimately, cops, a protester who goes by the name Spam (for his nasty e-mailing habit, apparently) has a hard time resisting laughter when he describes the scene of his group's last anti-convention action.

"People got really beaten up," Spam says. "But on a lighter note, when people went to the ACA with their demands, the ACA members started singing. And the actual climax of weirdness came when one of them started singing Kenny Rogers' 'The Gambler,' like trying to get a call-and-response thing going among the crowd. Some people are trying to read these very serious demands, and they're going, 'You gotta know when to hold 'em, know when to fold 'em ...'"

Indeed, six days at the Congress of Correction could drive the mildest to crime. Even those who spend their working lives with inmates might find more peace behind prison walls.

One of them, a shrill, suited poster girl for burnout, guards a trade show booth displaying wooden furniture made by prison inmates. When I linger, waiting for her pitch, she offers me a bar of soap instead. The travel-size slab isn't fitted with rope, but rather imprinted with the shape of Pennsylvania, and inside that, the words "Big House."

"I'd like the soap," I say, stammering over journalistic ethics, "but I can't. See," I say, glancing down at my orange warning-sign-styled press badge, "I'm a journalist."

She laughs heartily, pauses, then steps back to compose herself. "Well, you are!" she finally explodes, prompting me to wonder who's closer to a total meltdown: corrections conventioneers, protesting puppeteers or the people who write about them both.

Sara Kelly is executive editor of the Philadelphia Weekly.