Never mind the hair bands, here's a Flock of Seagulls!

The author of a new biography of Kurt Cobain looks back at the best and worst of musical decades, the 1980s. 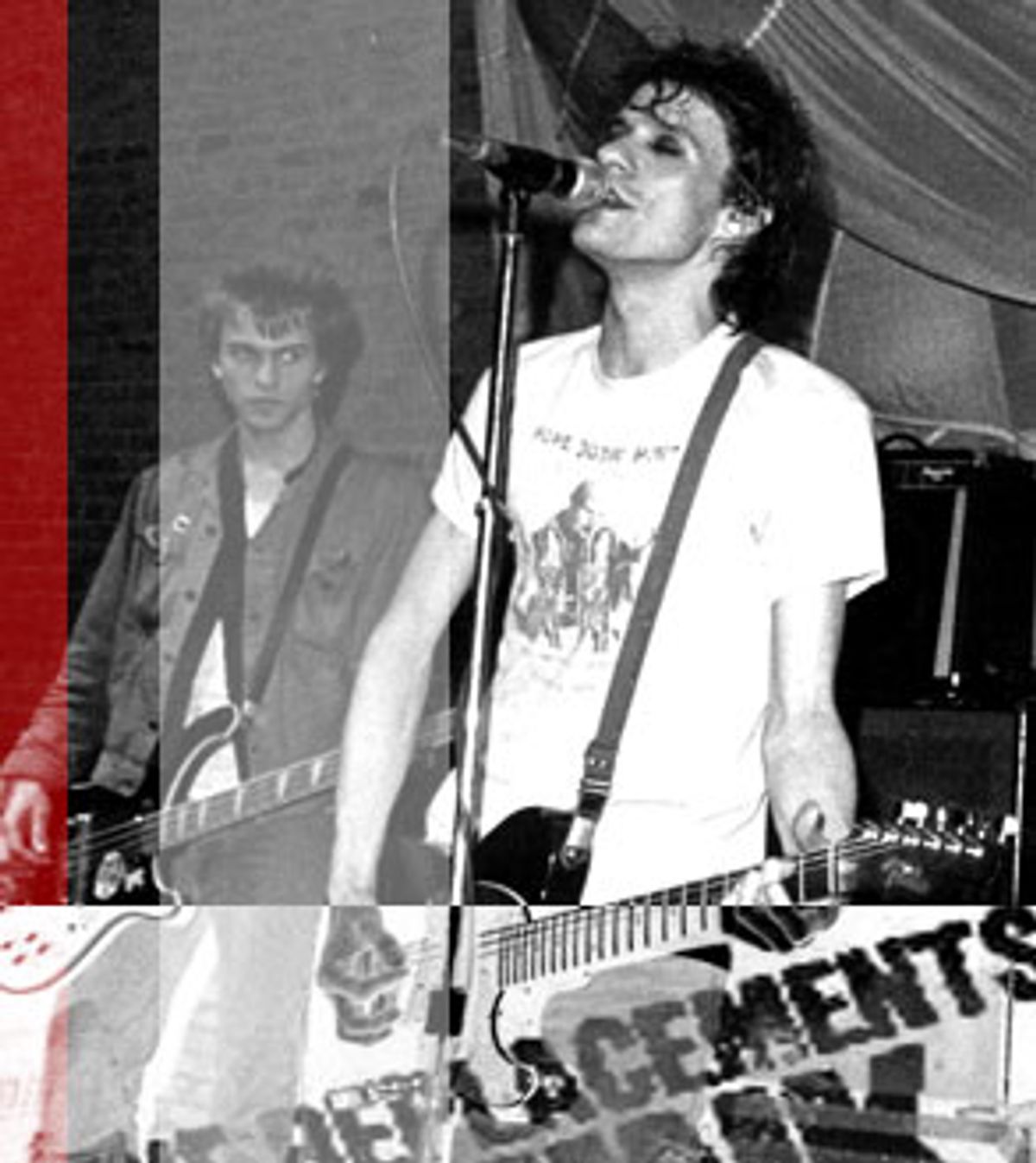 During one distinct point of the 1980s, I became convinced -- as did everyone I knew who considered themselves alternative music aficionados -- that the Northwest finally had produced a certifiable new rock star. He was a talented songwriter and guitarist from Seattle who wrote unforgettable songs; he had a mop of hair that was perennially in his face, providing the aloofness required for stardom; his band's independently released debut scored good reviews; virtually everyone who saw the group in concert agreed they'd seen one of the most fun bands in the world; and, most important, those notices were beginning to bring the first national attention to the Northwest rock scene since Heart.

When the band in question actually was reviewed in Rolling Stone -- something very unusual at the time for any indie band, much less one from the sleepy Northwest -- it seemed inevitable that massive success was just around the corner.

But sadly the year was 1986, Sub Pop was still a cassette fanzine, "grunge" was something you found under your fingernails and the musician in question was Scott McCaughey of the Young Fresh Fellows. The Fellows went on to have a respectable career as indie-rock darlings, but there were only a few thousand fans buying their albums in the mid-'80s, not a few million. I liked the band enough that I designed their first two album covers, forgoing payment and taking instead what I thought would be valuable test-pressings. I was thoroughly convinced that the Fellows semi-anthem "Beer Money" would soon be blasting from every college dorm room in the land. I was wrong.

This fall you're going to see a slew of articles -- and even my own recently released biography of Kurt Cobain -- timed to celebrate the 10-year anniversary of Nirvana's "Nevermind" album. Few records get this kind of attention 10 years after they come out, of course, but "Nevermind" is an album worth celebrating, at least with the same kind of barroom nostalgia that baseball fans might use to discuss a fabled World Series win from days gone by. But amid the hoopla I hope we remember that while the rock historians, biography writers and magazine publicists are busy emphasizing the epochal shifts in music, they sometimes overshadow everything else -- the incremental changes that preceded such changes or that follow them; the worthy bands like the Fellows, who but for a genre fluke might have been the sensation; and, of course, the pop roadkill left behind. (1991 was also the year of C&C Music Factory.)

Though "Nevermind" did indeed sell a staggering 10 million copies, it was hardly the singular soundtrack to our lives, even during the fall of 1991 -- remember another little Seattle combo called Pearl Jam, who also released an album that month? Though "Nevermind" may be the only vintage 1991 album to still be on the cover of music magazines a decade later, it wasn't the only music that mattered or that was worth writing about. Unfortunately "Nevermind" casts such a large shadow on alternative rock it distorts our memory, much the way Dec. 7, 1941, made an earlier generation forget anything that happened on Dec. 7, 1940.

Memory is a funny thing, particularly when it comes to our own musical past. For the post baby-boomer demographic of rock fans that I belong too -- raised as children on Bob Dylan, weaned on Joni Mitchell and kicked out of the house by the time the Ramones came around -- we tend to ignore the past until some marketing genius comes along and sticks a Nick Drake song in a commercial. Much of our selective-memory disorder in rock 'n' roll can be laid upon the feet of the one evil corporate entity that gets blamed for everything, and usually with merit: MTV.

There are many reasons to hate MTV (and you won't find me arguing against a single one of them), but none is more justified than the fact that it became the marker for how we remember certain years, simply because it is easier to remember visual images than it is to recall audio moments. It also didn't hurt that MTV had the tendency to hit on one band -- even a band as awful as Extreme, one of the biggest MTV stars in the months before "Nevermind" -- and to play them to death, or at least play them until you could remember every frame of the video.

The network's impact on our cognitive recollection is so great that anyone under the age of 30 can immediately recall the hair on that guy in a Flock of Seagulls far more quickly than they can remember their ATM number. This effect is only compounded by VH1's "Behind the Music" franchise, where only the seamy stories get a hearing and where Leif Garrett and Nikki Sixx are more important to rock than Bob Mould or the Mekons.

The celebration that you're not hearing about this fall, and the one I'd like to see magazine covers memorialize, is the 10-year anniversary of the death of hair bands. We can blame MTV for much of their rise and also part of their death, when the network switched gears to Cobain & Co. But for a significant chunk of time -- from, to pick an arbitrary benchmark, the release of Guns N' Roses' "Appetite for Destruction" in 1987 until that fateful day of Nirvana in 1991 -- bands like the Gunners, Poison, Great White and Mötley Crüe actually dominated the charts and sent sales of men's hair spray skyrocketing.

It is a staple of the "Nevermind" nostalgia that the record knocked Michael Jackson's "Dangerous" out of the No. 1 Billboard spot a few months after its release; a more potent irony is perhaps the fact that the rock group booked into Sound City Studios the week before Nirvana moved in to record "Nevermind" was Warrant, one of the worst of the hair bands. Leaving aside the buxom woman in the "Cherry Pie" video, I don't remember anything about Warrant except that they seemed to have a lot of hair on their chests and they wrote stupid choruses, two facts of which I am certain. Warrant was a multiplatinum act at the time; the album the group recorded at the time of "Nevermind" grazed the bottom of the charts and the band was never heard of again.

All of which leads me to a pair of new books that give credit to the other bands that hit my CD player (and turntable) during the '80s and early '90s -- bands for whom the term "also-rans" would be an insult, but "pioneers" makes them sound too old and dusty. Denise Sullivan in her new book, "Rip It Up," has a better title for it -- she calls them "rock 'n' roll rulebreakers." For Sullivan it's a category that stretches all the way back to the Kinks (who had a much dirtier sound than the Stones) and the Louvin Brothers (whose country harmonizing dared to be pretty). From the '80s she writes about Camper Van Beethoven, the Bay Area college rockers; Teenage Fanclub, purveyors of Scottish pop angst; Talking Heads; Elvis Costello; and Julian Cope, who had a now forgotten postpunk psychedelic band called the Teardrop Explodes.

All of these spent a fair amount of time on my CD player. "Rip It Up" is a collection of essays and interviews so the subjects aren't static. Sullivan manages to get beneath the surface in most of these pieces and inspires her subjects to express their own political manifestos. Here's Naoko Yamano of Shonen Knife, the kitschy Japanese pop act: "Shonen Knife is our life's work. It is equal to ourselves. So we will do it as long as we live."

The same declaration could come from several of the 13 bands who make up "Our Band Could Be Your Life," by Michael Azerrad, a book that seeks to chronicle important music that snuck through the cracks of '80s' history. Azerrad, best known as the author of the official 1993 Nirvana biography "Come As You Are," seems to be doing penance here by profiling many of the pre-"Nevermind" bands that influenced Cobain but didn't end up with commensurate riches or their own biographies. His list includes Black Flag, the L.A. hardcore band; Hüsker Dü, the Minneapolis speedsters; Sonic Youth, the Manhattan experimentalists; Seattle grungemasters Mudhoney; the twee Olympia, Wash., ensemble Beat Happening; and a half-dozen others, all rule breakers in their own way and worth remembering.

Azerrad profiles one of my favorite bands from the '80s, and the one that actually had more than a few parallels with the Young Fresh Fellows -- the Replacements, a band loved by many with an almost religious fervor. Lead by another mop-topped pop semi-legend named Paul Westerberg, the band's live shows were either so wonderful they launched pages of critical raves, or so awful they were captured by the band on the official, aptly named bootleg "The Shit Hits the Fans." The Young Fresh Fellows toured with the 'Mats several times; Scott McCaughey, ironically enough, was famous for providing the entertainment at Westerberg's wedding. (McCaughey now plays with R.E.M., has his own record label, Malt, and even put a new record out by the Young Fresh Fellows this year, so don't feel sorry for him.)

The Replacements, like many of the best bands from the early '80s, had awfully bad timing -- just as audiences began to turn toward indie rock they signed with a major label, and just when grunge became popular they fired their grungy guitar player. Like other bands of the era, they toured, made a bunch of records we don't talk about anymore and eventually fell apart due to their own excesses. Much of the Replacements' history is lost to history and even Azerrad's chapter touches only on a small slice of their career. The Replacements have yet to be profiled in a "Behind the Music."

Yet prior to their self-destruction, the Replacements created a time marker that MTV couldn't ignore -- their video for "Bastards of Young." The network played it at least once and though you'll likely never see it on "Total Request Live," it gets my vote for the best video music clip ever created. It has no hairstyles, no silicone-enhanced models and no young millionaires cruising down the street in cars you'll never be able to afford. It's not a video about fame or fantasy; Paula Abdul doesn't do any dance steps in it.

The entire video is a shot of a speaker playing the song, blaring the treble passages, pulsing to the bass. The camera never moves from the speaker front. In the pre-"Nevermind" days, such daring videos didn't inspire chapters in rock-critic books or magazine covers; they were just career-killers. "Bastards of Young" may have been the kiss of death commercially for the Replacements, but it was the kind of risky creative move that spoke to the next generation of artists and helped build up the pressure that would finally explode in the early 1990s. The song may not inspire a magazine cover but it still inspires me, and it will be remembered long after the 50th anniversary of the night a Flock of Seagulls ran out of styling gel.

Charles R. Cross founded the Rocket, the Seattle music magazine. His latest book is "Heavier Than Heaven: A Biography of Kurt Cobain" (Hyperion).