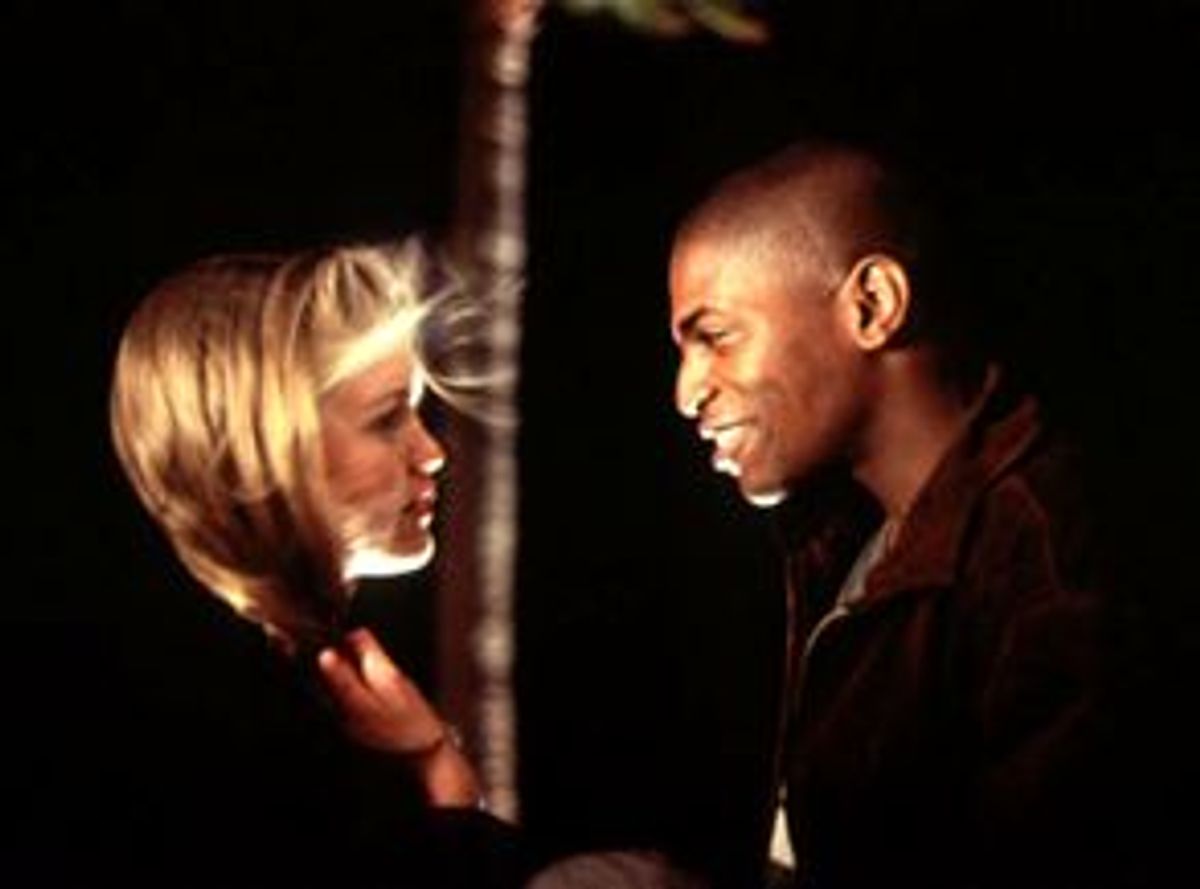 After Julia Stiles starred in "10 Things I Hate About You," the 1999 high school comedy update of Shakespeare's "The Taming of the Shrew," the celeb profiles that followed announced she would be playing two more Shakespeare heroines: First, Desdemona in "O," a high school update of "Othello," and then Ophelia in "Hamlet." By the time Michael Almereyda's "Hamlet" opened in the spring of 2000, "O" still hadn't appeared. And now, two years after it was supposed to open, it's finally being released.

The movie was delayed because of Columbine. After the Colorado school shooting, Miramax, which was set to release the film through its Dimension division, got cold feet about the picture's depiction of high school violence and reportedly was ready to shelve it permanently. Heated words and threats of lawsuits came from the director, Tim Blake Nelson. Finally, as it did when Miramax got cold feet about another controversial movie it was set to release, Kevin Smith's "Dogma," Lions Gate Films stepped in and took the movie off of Miramax's hands.

You can hardly be surprised by Miramax fearing that there were people stupid enough to assume that any movie showing a plot to incite murder in a high school would be a blueprint for America's youth. The assumption of all would-be censors is that people are too stupid to distinguish reality from fiction and that smarter, cooler heads (i.e., theirs) have to decide what audiences are capable of handling. Unfortunately, as Miramax certainly knew after Columbine, some of these people have gotten themselves into very powerful positions. (I direct your attention to Exhibit A: Sen. Joe Lieberman, D-Conn., who just last week announced support for a lawsuit brought by parents who contend that their daughter's murderers were "inspired" by a song by the heavy-metal band Slayer.)

That doesn't excuse the fact that the people at Miramax caved in simply because of what they imagined might happen. Especially when they had a movie whose intentions are as serious as Tim Blake Nelson's in "O," and a movie where the violence is never presented as anything but ugly and destructive. I wish I could report that those principled intentions also make "O" a good movie. But the film is a plodding, earnest adaptation that strips the source of its richness and ambiguity.

For years academics and Shakespeare scholars have debated whether Othello is a true hero or merely a braggart (as F.R. Leavis contended). The man certainly has some of the showoff in him, but that doesn't keep him from seeming the most direct and likable of Shakespeare's tragic heroes, the one most possessed of sensuality and humor. Laurence Olivier captured those qualities beautifully in the 1965 film of Britain's National Theatre production when he made an entrance, fresh from Desdemona's bed, sniffing a flower that he playfully rakes along Iago's face. (I'd hate to see a production where Othello is presented wholly as a braggart; what's the point of a tragic hero you can't feel anything for?)

But the real mystery of the play remains Iago. Why does he do what he does? In finding an answer, directors and actors have to be very careful not to simplify the depths of his hatred. Put it this way: I think an actor playing Iago has to decide for himself exactly what motivates the character; and then do everything he can to keep those specifics shrouded from the audience. In a good production of "Othello," the inscrutability of Iago's evil translates as a powerful example of the poisonous irrationality of jealousy.

"O" scotches that mystery in the opening scene when the Iago character, named Hugo and played by Josh Hartnett, tells us exactly why he hates Othello (here called Odin Jones and played by Mekhi Phifer): Because Hugo has been deprived of his daddy's love. (With that pop-psych explanation, the O of the title could have easily stood for "Oprah.")

Odin is the star basketball player at a prestigious private high school in the South, and Hugo's father, Duke (Martin Sheen), is the coach. Duke is one of those driven coaches who spares his players neither his praise nor his blame. He doesn't hold back from criticizing Hugo in front of the other players when the kid screws up; nor, when Odin lands his team in the state championships, does Duke hesitate to tell a pep rally that he loves Odin like his own son. So Hugo goes about plotting his revenge, making Odin think that his girlfriend Desi (Julia Stiles) is cheating on him with his friend Casio (Andrew Keegan), using the rich rube Roger (the Rodrigo character, played by Elden Henson) as his stooge.

But "Othello" should be more than just watching the machinations of a revenge plot fall into place. Plot development is not the same thing as imparting a sense of tragic inevitability. And it makes utterly no sense for the Iago character -- who, in the climax of the play, as here, falls into silence when his scheme has been carried out, thus maintaining the unknowability that is his hallmark throughout the play -- to lay out his motives for us, which is what happens here.

Screenwriter Brad Kaaya's transposition of the film to a high school feels promising. What better place for irrational jealousy to fester than among teenagers? Especially since, for teens, life seems unimaginable beyond the immediate future. And some of the actors do just fine, particularly Andrew Keegan as Casio, and Julia Stiles, whose confused vulnerability often seems like the only genuine emotion in the movie. She's hamstrung at times by the script, which makes Desi too much of a shrinking violet. When her headmaster father (John Heard) confronts her with a rumor that Odin raped her, she simply tells him that their private life is none of his business.

Wouldn't a girl whose boyfriend has been falsely accused of rape be more vociferous in his defense? Josh Hartnett had the right look for the high school dreamboat in "The Virgin Suicides," but, so far, he hasn't given any indication of being an actor. He simply doesn't have the depth or sense of ominous mystery to pull off Iago. He acts entirely with his overhanging brow and clenched jaw, and he very quickly becomes a drag. Mekhi Phifer has some nice relaxed moments, especially cuddling in bed with Stiles. But this Othello has been drained of humor and sexy playfulness. Finally, he's as uninteresting as all upright young men usually are.

To be fair, Phifer suffers from a decision that's even more damaging than making Iago spill the beans. Kaaya and Nelson have made the classic mistake of assuming that "Othello" is about race, an issue that, at most, is tangential to the play, which is first and foremost about jealousy. The British theater director Jonathan Miller put it most bluntly when he said, "When a black actor does the part, it offsets the play, it puts it out of balance." That may go a bit too far. Would Miller never cast a black actor as Othello? Whether a black actor or a white actor plays Othello, it's up to the director to determine what's given weight in any production. A friend of mine saw a production with the African-American actors Avery Brooks and Andre Braugher as Othello and Iago. A black Iago, he said, made race a moot point. But Miller is quite right when he says, "the play was hijacked for political purposes."

And in "O," cross purposes. In a piece in the Arts & Leisure section of Sunday's New York Times, director Nelson said that though "O" is set in the South, he wanted to avoid the cliché (the northern liberal cliché, he might have added) of making the South a racist hotbed. And he certainly does, with the close relationship between Odin and his coach Duke (though Martin Sheen plays the role as a gung-ho cliché). But when Hugo tells Odin that Casio refers to him as "the nigger," it's far different from Iago's exclaiming "I hate the Moor" (which is not a derogatory term). If Nelson wants to avoid clichés, why then does he make Odin the only black student in the school? Surely, he's not implying that, with the growing black middle class, no Southern blacks are able to afford sending their kids to private school?

That appears to be what he means when, in one of the basketball scenes, the camera pans the bench of a visiting public-school team and shows us that every one is black. At the climax of the movie, after Hugo's scheme has left a pile of bodies, Odin gives a speech saying that he doesn't want people to make (implicitly, racial) assumptions about his background. But by making Odin the only black kid in the school, Nelson and Kaaya have given in to just those assumptions. Just as they do when Odin, deep in the throes of the jealousy Hugo has manufactured, adopts a gangsta attitude. This seems meant to be the movie's version of the crudeness that Othello's power of glibness descends to when he becomes undone. But Odin's crudity is made racially specific in a way that Othello's is not. And the movie doesn't have the wit or smarts to explore how gangsta fantasies of machismo become a comfort for Odin's threatened masculinity. He just seems to be surrendering to the thug that was always inside him.

I think what the filmmakers are trying to do here is to paint a world where, no matter how good or successful or admired you are, you are always reduced to your race. And that's a fine subject. But not for an adaptation of "Othello." It's a hell of a thing to reduce one of Shakespeare's greatest tragedies to little more than a contemporary problem play. "O" takes "Othello" to high school but not in the way the filmmakers intended. What Nelson and Kaaya do here smacks of a naive and eager young English instructor desperate to prove to students the "relevance" of his material.