Inside the Durban debacle

By focusing the world on Israeli "apartheid" at the U.N. racism conference, well-organized Arab activists are trying to turn Israel into the South Africa of the 21st century. 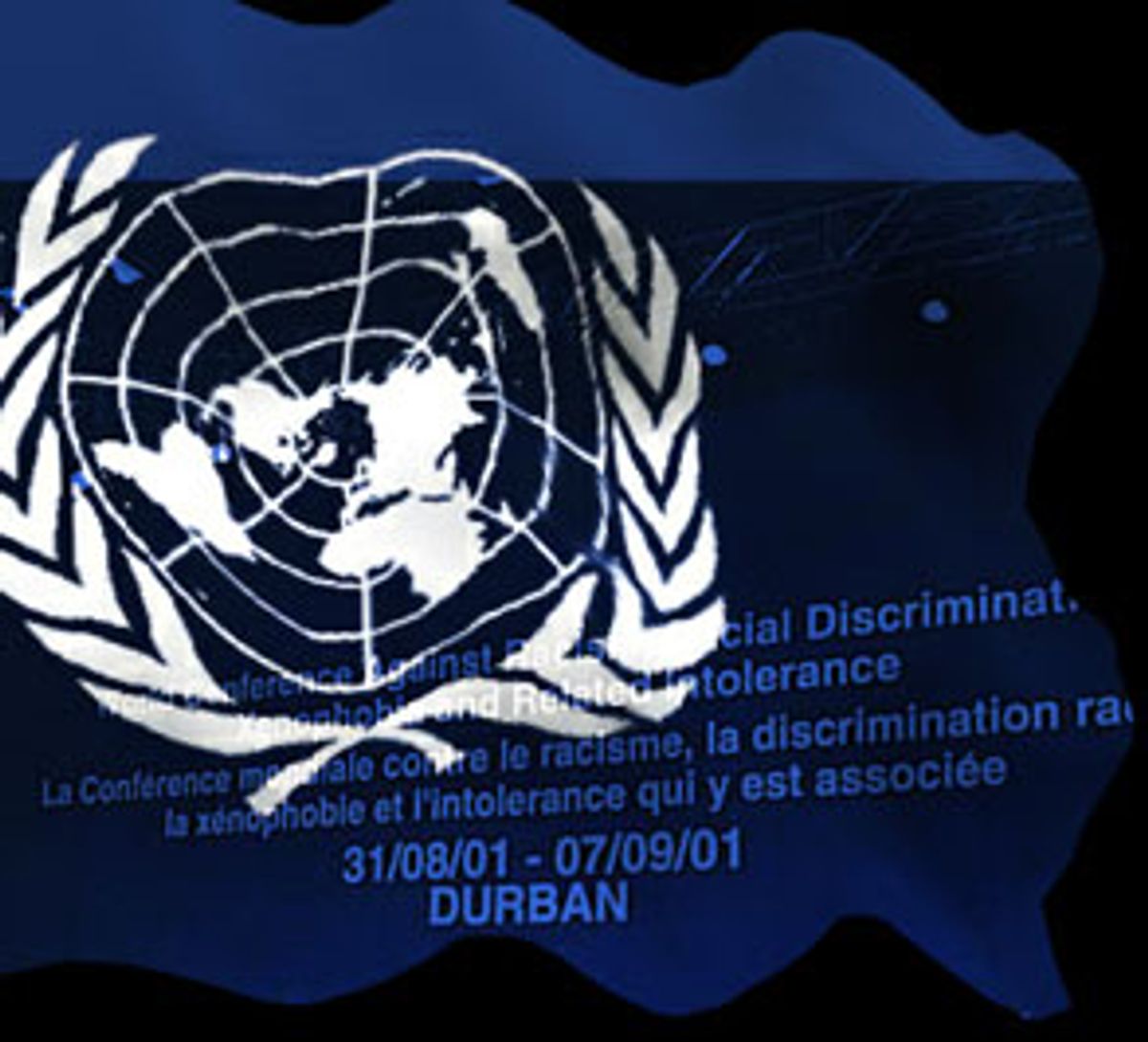 You're South Africa, or actually the South African National Non-Governmental Organization Coalition, and you're hosting the U.N. World Conference Against Racism. Who do you select to greet the 8,000 delegates representing nongovernmental organizations (NGOs) from around the globe?

When conference organizers chose Palestine Liberation Organization head Yasser Arafat and Cuban President Fidel Castro to greet NGO delegates, the tone was set for the conference, which has imploded this week over the issue of Israel's treatment of the Palestinians and slavery reparations.

The sight of Castro being cheered by an enraptured audience, many of whom waved little Cuban flags-on-a-stick that were distributed beforehand, as he railed against the evils of colonialism, globalization and alleged "genocide" committed by Israel against Palestinians, convinced some observers that the conference would become a place where ultra-left, anti-Israel zealots carried the day.

"I was shocked," said Yuri Dzhibladze, president of the Center for Development of Democracy and Human Rights in Russia. "It showed a very bad understanding of this forum, and the meaning of the term 'human rights.' Listening to Fidel speak, we only had to wonder why the organizers had failed to invite Saddam Hussein, or a representative of the Taliban regime."

Quickly the Israeli-Palestinian conflict took center stage at the more important governmental portion of the U.N. conference. (NGO delegates met separately, and came up with their own, even more anti-Israel conference report.) The issue still dominates Durban, even after the U.S. walked out Monday. The subsequent media spotlight has practically drowned out the myriad causes here, including what should have been the centerpiece issue here: an apology, and perhaps even reparations, for the trade in African slaves.

But some observers say the Durban activism may mark a new phase in the campaign to isolate Israel. The NGO resolution adopted Sept. 1 is particularly harsh, calling Israel a "racist, apartheid" state, guilty of "genocide" and "ethnic cleansing." To use such language in South Africa, where the battle against apartheid drew worldwide support, is no accident; the fine print of the declaration calls for "the full cessation of all links (diplomatic, economic, social, aid, military cooperation and training) between all states and Israel," plus, the "launch of an international anti-Israel Apartheid movement."

Still, the measure's backers may have overreached: By the end of this week, a backlash was developing against the harsh language of the NGO declaration, which was passed late in the evening and only approved by the roughly 100 NGO delegates left, out of the 8,000 milling about Durban.

Israeli activists and other Jewish delegates began getting support from non-Jews, like Dzhibladze, and this week distanced themselves from an NGO declaration they say was "hijacked."

But Palestinian activists describe the declaration's language and its call for sanctions as "a legitimate action" to pressure Israel.

"Any victim group has a right to fight for its rights and to resist occupation," said Jamil Dakwar, an Israeli Arab staff attorney for Adalah: The Legal Center for Arab Minority Rights in Israel. ("Adalah" means "justice" in Arabic.)

"And the fact that the Palestinian issue has been highlighted here is not only because of our role," Dakwar continued, "but because it's normal that a just cause against ongoing abuses receives such attention and solidarity from around the globe."

The anti-Israel activism, however, clearly was not a spontaneous combustion. From the outset of the U.N. conference, it was clear the Palestinian delegation arrived in this Indian Ocean port city well-organized, well-funded and highly motivated to hijack the conference for its own ends.

Every day during the NGO conference last week, pro-Palestinian groups demonstrated loudly in the streets, sporting posters, banners and T-shirts that linked racism with Zionism and apartheid with Israel. The Palestinians also handed out thousands of free checkered keffiyah-like scarves and T-shirts with anti-Israel slogans.

The public relations battle was a no-contest.

"I came here thinking the Middle East shouldn't be on the agenda," said one American at the conference. "But with the situation here, it forces you to choose sides. And given a choice between [Israeli Prime Minister Ariel] Sharon and [Palestinian Authority President Yasser] Arafat, I choose Arafat."

But the scene also had a number of ugly moments, Jewish activists say. During one street rally, they saw a placard that read "Hitler Should Have Finished the Job" and heard someone yell "Kill the Jews." Nearby, a man was reportedly spotted selling the most notorious and conspiratorial of anti-Semitic tracts, "The Protocols of the Elders of Zion."

Inside the U.N. conference grounds and within its tents, the rhetoric and agitprop were also white hot. Fliers were found with Hitler's photo above the question: "What if I had won? There would be no Israel, and no Palestinian bloodshed." A press conference held by the Jewish caucus was cut short by a rowdy group of Iranian women, one of whom screamed, "Six million dead and you're holding the world hostage!"

Israel's supporters, it should be noted, usually hold their own in the media and intellectual debate. But at the Durban conference, the Jewish side came armed with little more than position papers, books and other workshop materials, and was overmatched. Thrown on the defensive, they responded by quickly printing and handing out T-shirts of their own, one with a peace sign inside the Jewish Star of David under the slogan "Fight Racism, Not Jews" and a second with Martin Luther King Jr.'s quote: "When people criticize Zionism, they mean Jews."

And certainly they had their high-profile defenders. When U.N. officials appeared ready to tolerate inflammatory anti-Israel language making its way into a final conference report, U.S. Rep. Tom Lantos, D-Calif., the top Democrat in the U.S. delegation, said sharply, "What you have here is the paradox of an anti-racism conference that is itself racist." Lantos, the only Holocaust survivor sitting in Congress and a co-founder of its human rights caucus, blasted delegates from Western nations who he said were privately disgusted with the proceedings but refused to speak out.

The Americans walked out in protest Monday, followed soon after by Israel. The Jewish NGO caucus announced its formal withdrawal Tuesday. Canadian Foreign Minister John Manley cleared out on Wednesday. And the French warned that the European Union would do so as well if Israel were labeled as "racist."

On Thursday, Ali Khorram, the Iranian ambassador to the U.N. in Geneva who was elected chairman of the governmental declaration-drafting committee earlier this week (not a very good sign for Israel), dismissed the possibility that anti-Israel paragraphs would be dropped so as not to doom the rest of the 445-paragraph declaration.

"I'm not sure it's an appropriate way, because this conference has to deal with all matters regarding racism," Khorram told a press conference.

With the Durban conference set to close Friday, it was still unclear how the final declaration would target Israel. Conflicting rumors wafted through the hallways Thursday, with talk of "compromise" mixed with renewed "hard-line" stances.

Granted, the language that appeared in the NGO declaration will almost certainly not find its way into the final governmental declaration.

But some Jewish activists believe it will ripple outward nonetheless. They see the conference as the first step of a new worldwide Palestinian strategy aimed at "delegitimizing" Israel: the "South Africa Strategy," designed to dismantle the Jewish state by isolation enforced by embargoes and sanctions. Already, someone seems to have heard: A pro-Palestinian student group announced this week that in October it will launch a campaign across university campuses nationwide to demand U.S. divesture from Israel, much the way student groups forced divestiture from South Africa in the 1970s and '80s.

Israel has many defenders, and the campaign is unlikely to truly ignite, but it could force the nation and its supporters to fight many more political brush fires around the globe, and erode its overall international support.

"One may think this is a strategy borne out of frustration, from a people who have nothing left to lose," said Felice Gaer, a member of the U.S. Commission on International Religious Freedom and a human rights expert at the American Jewish Committee. "In fact, it's a well-organized effort to use the human rights talk to delegitimize not only the actions of Israel, but its very right to exist. In all the history of the United Nations there's only been one issue that has caused the member states to declare another member illegitimate, and that has been states based on a racist ideology, apartheid." South Africa and Rhodesia, now known as Zimbabwe, to be precise.

But Dakwar rejected the notion of a far-reaching strategy to destroy Israel. "As far as I know, there is no intention," he said. "Those who are saying that are blaming the victim, simply because they are asking for their rights."

Jewish observers also say they expect the accusation of apartheid to be hammered home again at the U.N. General Assembly later this month when it reconvenes in New York. At the world body, they say, language used over and over again, particularly that which condemns Israel, tends to become law. As usual, Israel will have to rely on America's diplomatic intervention, and if things get too serious, the U.S. veto at the U.N. Security Council.

And then there's concern about who will get blamed for the anticipated failure of the Durban conference to make progress on the world's most pressing racial issues. Some Jewish activists here, while pleasantly surprised with the support shown for Israel by the Bush administration, nevertheless wondered whether Bush was ducking behind Israel to avoid the issue of slavery reparations. Washington may have considered it a win-win: take the high ground by not tolerating Israel-bashing, and avoid talk of reparations.

"I'm very, very skeptical about what's gone on here," said one activist from Kansas City. "This was very convenient for [Bush]."

Moreover, with the U.S. walkout and stunted progress on reparations, some also worried about potential fallout for black-Jewish relations in Congress, and in society at large. African-American leaders and activists here have been frustrated, first by the absence of U.S. Secretary of State Colin Powell, then the attention diverted to the Middle East.

Black-Jewish relations may indeed be in for a rough spell, said a Kenyan-born American journalist in Durban.

"There's probably going to be some beef," said the journalist, "where some black folks are going to say that the smaller Jewish community is again showing more influence in Washington than a community that's almost 15 percent of the population."