The art of war 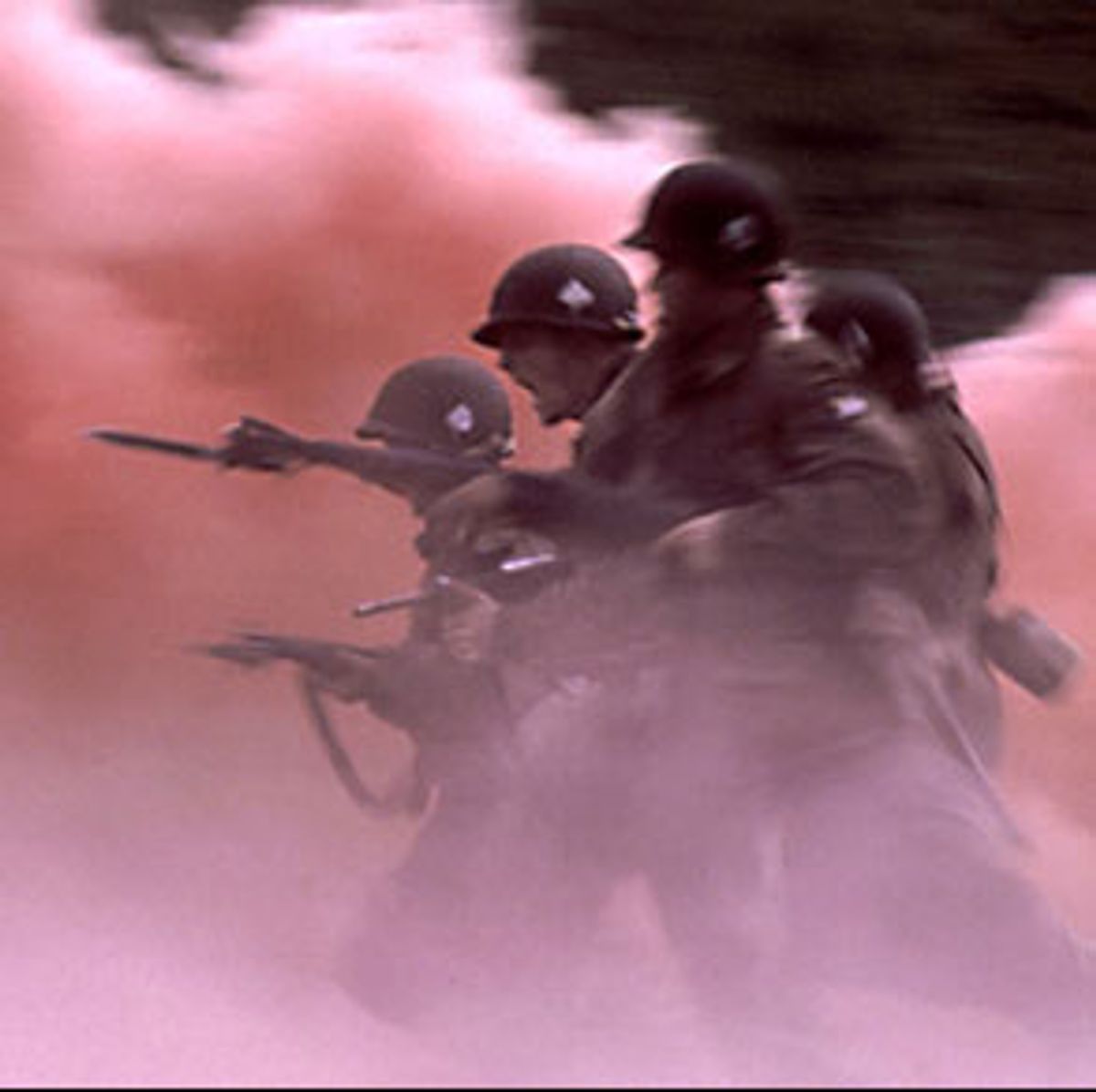 The history of serious movies about war, from "Paths of Glory" to "Johnny Got His Gun" to "Apocalypse Now" to "Saving Private Ryan," is a history of attempts to do the impossible: turn the unthinkable into art. The problem, always, is truth. If a work of art about war does not tell the truth, it is obscene -- but how can one tell this truth? And what is it, anyway? Is it a former human being who has been turned into pieces of bloody meat by large fragments of metal? Or is it the soaring words of Abraham Lincoln: "That from these honored dead we take increased devotion to that cause for which they gave the last full measure of devotion -- that we here highly resolve that these dead shall not have died in vain ..."? Falstaff or Prince Hal? Hideous death or trumpets and brass? What form, what story line, what aesthetic approach can capture war's nihilistic horror and still contain some larger meaning?

"Band of Brothers," Steven Spielberg and Tom Hanks' ambitious 10-part miniseries based on the bestselling book by Stephen Ambrose, doesn't aspire to square this ultimate circle, but it is still a serious film with a serious purpose. It attempts to tell an epic story -- the career of a celebrated American infantry company in World War II, from D-Day through the end of the war -- without resort either to the patriotic grandiosity or to the narrative devices we associate with such tales. It wants to occupy a kind of middle ground, somewhere between the sobriety of documentary and the daring of great feature-filmmaking: to accurately show the at-times nightmarish reality of life in a combat unit, while affirming both the essential decency and the extraordinary heroism of the men in that unit.

It succeeds, persuasively, on both scores -- and yet it is not an artistic masterpiece. Whether it could have been one without sacrificing its dedication to the truth of its chosen story is a difficult question to answer.

"Greatest Generation" hoopla has begun to feel increasingly canned, but "Band of Brothers" isn't sentimental except in the largest, most legitimate sense. Its heroes aren't John Wayne cutouts: They loot, make anti-Semitic cracks, drink too much, gun down Germans unnecessarily. Yet the series is untinged by revisionism. The shortcomings of its characters are dwarfed by their heroism -- and thanks to virtuoso, you're-in-the-next-foxhole direction and cinematography, you feel their fear and their courage in your face, your gut and your heart.

To watch the head-snapping scene in Episode 2 in which the paratroopers jump out through flak at high speeds and low elevations over Normandy, or the vicious, lucid, breathtakingly filmed battle of Brecourt Manor, in which company commander Dick Winters and a squad use daring, speed and guile to knock out three German guns, is to be reminded that men and women who have fought in any war do things that mark them forever and are mystifying and huge. And -- in the case of the soldiers in "Band of Brothers" -- those blazoned deeds helped save the world. In a country sorely lacking both in rudimentary historical knowledge and respect for genuine achievement, making a film that hammers this home -- even if the message is part of what has become a Disneyland-like chorus of received reverence -- deserves praise.

In a way, "Band of Brothers" aspires to be the film equivalent of the writings of Ernie Pyle, the great World War II correspondent who deserves more respect than he now gets. Like Pyle's work, "Band of Brothers" is celebratory, but hardheaded. Pyle, who was killed by a Japanese machine-gunner in the war's last great battle, Okinawa, wrote beautifully about all aspects of war, but one of the things I find most moving about his books is one small, somewhat corny-seeming detail. No matter what his larger subject might be, whenever he talked to a GI, Pyle always stopped to put down not just the man's name but, often, his address. It was a constant reminder to the reader that all of these men had homes, families, lives, and that each and every one of them was worthy of this small but somehow Homeric honor.

An early scene in "Band of Brothers" poignantly recalls this. The series has no hero, but it does have one character who is most central and enduring: Dick Winters, who starts out as the company commander, a straight-arrow prince of a leader who is played with astonishing, unprissy dignity by the British actor Damian Lewis. It is just before D-Day, and a platoon of his troops are sitting in two lines on the tarmac, waiting to board the plane from which they will parachute behind German lines in Normandy. He says a few words -- "Good luck. God bless you. I'll see you in the assembly area" -- which resonate much deeper than you expect them to. Then he reaches out and grasps the hand of the first man -- his troops are laden with so much gear they have to be helped to their feet. As he takes each man's hand in turn and pulls him to his feet, he looks him in the face. And we see these dozen or so American faces for an instant each, as their leader does -- heartbreakingly young, and trusting, and fearful, and brave. Like Pyle's street addresses, it is an act of seeing that is also an act of tribute. And then the moment is over and we're inside the plane.

In "Band of Brothers," the moments are always over. Epiphanies and bullets come, then go, fast. Rarely has a war film so resisted the impulse to milk climaxes, to linger on high notes. (The fact that neither Spielberg nor Hanks has been noted recently for restraint in the face of emotional pig-outs makes this even more impressive.) In the third episode, "Carentan," for example, the troops freeze during an attack on a machine gun position and refuse to get out of a shallow ditch. Winters runs up and down the road, kicking and physically pulling them out of the ditch. It's an act of amazing courage, but it's neither commented on nor underlined by the camera in any way. It just happens, like everything else. After a while, this calculated directorial restraint creates a feeling of integrity, the sense that nobody is bullshitting us. Of all the series' many virtues, this is perhaps its most notable.

Paradoxically, however, the very qualities that make this engrossing series historically sound and morally unassailable keep it from being particularly dramatically compelling. "Band of Brothers" is solid, at times dazzling, and contains many moving scenes, but its respectfulness prevents it from taking narrative risks -- and leaves us somewhat emotionally detached from its characters.

This was probably inevitable. Most war movies take their narrative shape either from conflicts between characters, or a conflict within one character. It's understandable that the filmmakers didn't opt for the conflict-between-characters device -- it's inherently hokey. (In fact, the one episode dominated by such a conflict, the first one, is probably the weakest of all 10 episodes: The conflict between the sadistic commander in charge of training the volunteers -- played by David Schwimmer, just about the only recognizable actor in the cast -- and Winters feels trite, even though it's scrupulously based on fact.)

Telling the story from the point of view of a single character was not an option, either, since the series' subject is not a person but E Company -- meaning, in effect, that the real subject is the American war effort. This is a noble subject, but it only acquires real pathos when you are able to watch it in a state of what one might call "living nostalgia" -- a reverential act of historical imagination. For "Band of Brothers" truly to come alive, you have to simultaneously put yourself there in the field as the shells come in and know that it's something that really happened in the past and has a meaning. When you can do this -- and the E-ticket direction is explicitly aimed at putting you in that virtual-reality seat -- the experience can be overwhelming. When you can't, "Band of Brothers" can feel like a superbly filmed series of battle sequences populated by people we don't know well enough to care about that much.

What's tricky is that one has to acknowledge that this is, in an important and rather unusual way, laudable. Hollywood always goes for character-driven schlock, so to see a big-budget series driven by an act of empathetic historical memory, not boy-meets-girl or boy-hates-boy, almost feels like going to church. Still, the fact remains that through the first five episodes, it's hard to tell the players without a scorecard -- and since this is a feature, and not a documentary, that matters. (The fact that the actors are mostly little-known doesn't help -- though that too makes the series feel more real.)

By the sixth episode, though, we start to know who the different characters are. That episode, perhaps the most powerful one in the series, tells the story of a young medic's wintry ordeal in Bastogne, the town where the 101st Airborne (the division to which E Company belonged) endured Hitler's final fury in the decisive Battle of the Bulge. And through the remaining episodes, "Band of Brothers" succeeds both as an epic about a combat unit's battles across Europe and a closer-focused study of individual soldiers. By the end we know and care about them -- and are curious to know the identity of the old men, members of E Company, whose often-moving recollections start each episode. When they are identified at the end of the series, however, it isn't an overwhelming moment. This very fact is oddly satisfying: In the end, it's the ordinariness of the Americans who fought that stands out.

"Band of Brothers" isn't a great work. It is above all an act of tribute, and perhaps that prevents it from possessing the independence of the greatest films about war. But it is an honorable project, and one of the definitive film treatments of World War II. It brings a new honesty and depth to the way we remember that terrible war, and the boys from Chicago and Louisiana and Montana and New York who fought and won it for us. Without illusions. With abiding respect.