"These are big strong guys. They ain't going down easy"

A day in the life of a decimated firehouse. 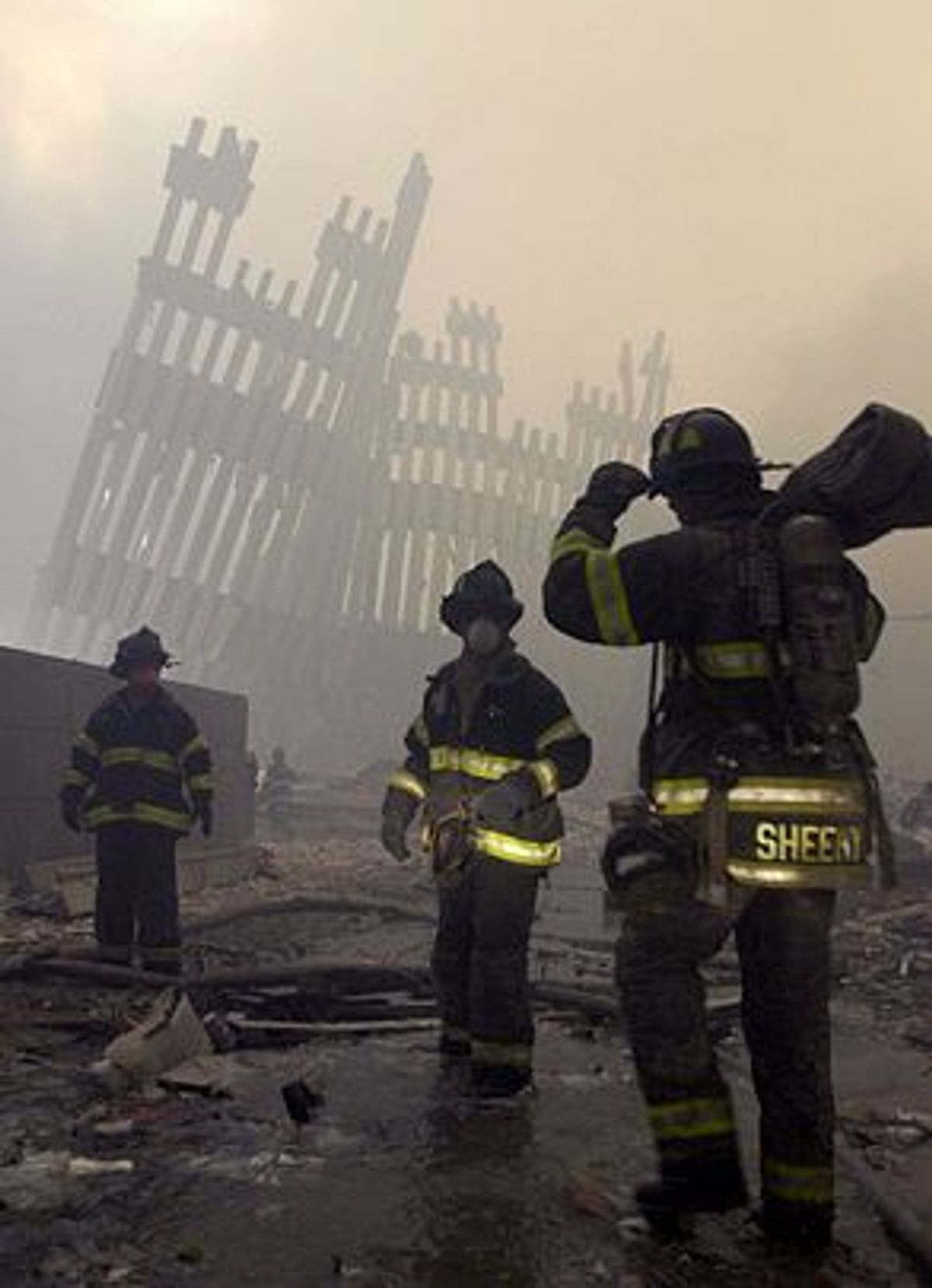 It is 3 o'clock and sunny. Thirty hours ago, the World Trade Center collapsed and smoke drifts north from downtown, turning the air gray and gritty. At Watchtower No. 2, home of New York Fire Department Ladder Company 3, on East 13th Street in Greenwich Village, huge boots and stiff, thick pants cluster at one side of the station's empty garage, ready for a call and men to fill them; jackets, shoes and equipment are strewn across the floor.

The company has lost its truck and as many as 12 of its 25 men are still missing, including Capt. Patrick Brown. They were last seen racing into Tower 2 to rescue people, to help them get out of the building. Brown's name is still on the station's chalkboard duty roster. A single yellow rose hangs over the sign.

Officials now say 350 New York City firefighters are missing after Tuesday's attack. This is more than twice the number of annual fatalities recorded for the entire nation every year since 1977, according to the New York Times. No single fire in U.S. history has come close to wiping out more rescuers: Until now, the most firefighters killed in one incident was 27, when, in April 1947, explosions tore through two ships docked in Texas City, Texas.

At least 10 fire trucks are thought to be beneath the rubble downtown. All five of New York's elite Rescue Companies are missing. Also missing are five of the fire department's most senior officials and 12 battalion chiefs, according to the Times.

Six men from Engine Company 59 in the Bronx have moved to Ladder 3 to cover for the missing. "We've been here since yesterday and any alarms in this area, we pick up," says firefighter Jim McKay, 48. "We'll be here at least for the next two days, until this company gets back in service."

They mill around, waiting for calls, waiting for news, waiting for alarms. One finds a quiet place to sit, staring vacantly into the street, which, like everything else below 14th Street, has been closed to traffic. Others greet visitors from the community, offer comfort and what little information they know. Anyone who talks does so quietly.

The men look exhausted, but ready to roll. And each call to action seems to offer some relief. There are uniforms to put on, a truck to hop into, sirens to blare. And every few minutes, the station house phone rings. Relatives are told, "At this point, all we can do is wait."

In a corner of the station, a pretty, dark-haired woman is crying, head in her hands. Her teenage son sits beside her, trying to console her.

"So he might be at a hospital and we don't know about it?" she asks a white-haired man in a fire department T-shirt.

Ed Bergen, 48, doesn't know what to tell her. His best friend is this woman's boyfriend. They've only been going out for one month. When Bergen's friend disappeared yesterday, no one knew to call her. She came all the way from Brooklyn to try to get news.

Bergen himself might not have been there to comfort her, had he not retired after 22 years with the department on Monday, the day before the disaster.

"You're supposed to be happy when you retire, but this is the farthest thing from happiness," says Bergen, who was in Ladder Company 5, on 14th Street, but has friends in Ladder 3. "I have three brothers in the service and they're OK. But these guys are my brothers too. I know about 25 guys missing. Personal friends."

Of his buddy, one of two firefighters missing from Ladder 5, he says, "I doubt that he's alive. He and five other guys went into Tower 2. They got as far as the 30th floor. By that time the first tower was coming down. It was save yourself at that point."

(Matt Black, 38, a firefighter at Ladder 5, declines to give out the names of those missing, saying, "We're not sure what their friends and family know, and there's still some hope.")

Gray dust cakes the truck parked out front. A fireman washes its windshield, but before he can touch the rest, a voice crackles over the P.A. There is smoke at 23rd and Lexington.

Six men file into the garage, shouting directions, donning their uniforms, and clamber into Engine 59. In seconds, they're gone on what is the first of three calls they will get in the next hour.

The rest of Ladder 3 has already been called downtown to search through the rubble, so the station is empty except for the few retired firefighters left behind. They've come down to lend a hand, answer phones, answer questions.

"You feel useless here," says Kevin Horan, 47, who retired a little more than a year ago after 17 years in Ladder 3. "This is scary, not knowing. When you're doing it you have control, so it's not as fearful. But this you have no control over. This, you have to sit and wait and pray."

On Tuesday, Horan had been right in the action. The "cushy desk job" he took to see him through his retirement was as a fire safety director for the World Trade Center. He was in the lobby of Tower 2 when the first plane hit.

"Initially, we thought it was an explosion in Tower A," he says. "Then we got reports -- a small plane, maybe a helicopter."

But when the next plane hit a few minutes later, Horan and his colleagues knew this was no accident and began evacuation procedures, making an announcement over the building's public address system and then directing people as they left the building.

"We definitely got the vast majority out," he says, more grim than proud. "I'd say the majority of the people on the impact areas. Above that, I don't know if we'll ever know."

He himself survived by running for his life when he heard the building starting to go and jumping under a truck.

"I heard a rumble and I looked up," he recalls. "You could see the top just starting to disintegrate, and I turned and I ran and when I felt the wind hit my back, I knew it was time to dive, so I just dove under a truck and covered up."

He knows he's lucky to have made it out with only a few cuts and bruises.

As for his fallen former colleagues, Horan believes they have a chance. "How many people have they found in earthquakes in Mexico? Little kids lasted nine days. So miracles happen," he says. "These are big strong guys. They ain't going down easy. They're going to fight."

Bergen approaches Horan and places a hand on his friend's shoulder. The two men make eye contact and hold it for a moment, but say nothing. The station's table is heaped with food, just a fraction of the donations that people have been dropping off since yesterday. All are received with quiet gratitude, sometimes a hug.

Alysa Weinstein, 31, an interior designer who lives nearby, arrives with more. She baked three dozen cookies for Ladder 3.

"I'm so touched," Weinstein says. "I don't know any of them personally but ..." She trails off in tears.

"To the Fire Department, NYC's finest. We love you."

"Thank you. Our hearts, thoughts and prayers are with you."

A wilting sprig of wildflowers drapes across a crudely written sign: "Our neighborhood friends," it reads. "You are heroes."

Multicolored signs also cover the windows of the New York University dorm across the street.

Construction-paper letters in blue, pink, yellow. "WE LUV U!"

"The whole dorm -- 600 residents -- pulled together to make these signs for the windows," says Keelia Wright, a senior resident advisor at NYU. "It's been so sad seeing these big, tough guys heartbroken because their friends are missing. When they saw our signs, they came over and told us thank you."

Fielding hundreds of calls in weary succession, International Association of Fire Fighters spokesman Pete Janhumen speaks bluntly and graciously as he tries to explain how this -- "the worst one-day loss of life in our union's 83-year history" -- could happen. Firefighters, he says, "are the first lines of defense" in acts of terrorism or any disaster. "They do the things that you and I would never do," he says. "They run up in the World Trade Center after a jumbo jet flies into it. They're running up as people are fleeing. What more can be said?"

With similar bluntness and a countenance that is extraordinarily gentle for a very big guy, Horan says what more can be said when asked how he and his friends will cope with their enormous losses:

"I tell the younger guys what the older guys told me when I came up," Horan says. "There are three rules to being a fireman: 1) People die in fires. 2) Firemen die in fires. And 3) You can't change Rules 1 and 2."