How to defeat bin Laden

The U.S. should drop its war rhetoric and convince the Islamic world that he is a dangerous fugitive from justice. 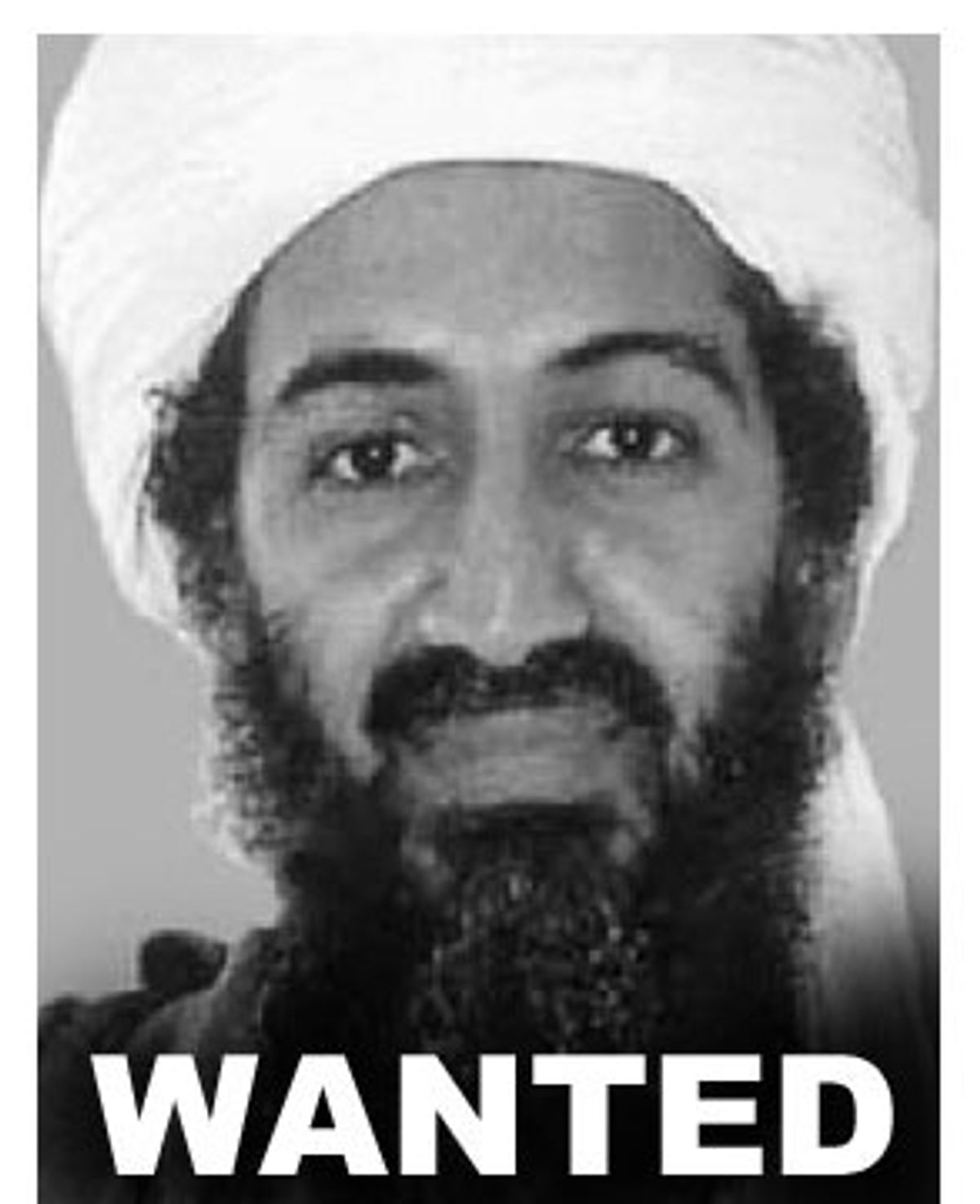 If, as appears increasingly likely, groups associated with terrorist mastermind Osama bin Laden are found to be responsible for Tuesday's murderous attacks in New York and Washington, the United States would be fully justified in taking vigorous action to apprehend and punish him and to put his terror networks out of business. The question then becomes: What strategy will best accomplish this objective?

There are many in Washington and around the country who believe that the United States should declare war on bin Laden -- along with any governments that have given him assistance of one sort or another -- and employ the full weight of American military power to accomplish this purpose. Such action would undoubtedly help restore confidence in the power of the American nation, and provide a degree of satisfaction to those who crave retribution for Tuesday's horrific attacks. But we must also ask: Will it achieve the goal of eradicating bin Laden's networks and eliminating the terrorist threat to the United States? There are good reasons to suspect that it will not.

The image of American aircraft and missiles bombing Arab states and producing massive casualties -- many of them, inevitably, civilians with no ties to terrorists -- will surely confirm the belief among many ordinary Muslims that bin Laden is right: that the United States is intent on tormenting and subduing the Islamic world. As Bruce Shapiro has observed, out of the rubble of American attacks will come thousands of new volunteers for bin Laden's anti-American jihad.

Even more troubling, it is highly unlikely that such action will actually succeed in crippling bin Laden's underground networks. Unlike conventional military forces, these groups do not maintain fixed bases and installations but move from one camouflaged location to another -- all over the world. (Several of the terrorists suspected of involvement in Tuesday's attacks are now thought to have spent the past year hiding in a quiet, inconspicuous neighborhood in Hamburg, Germany.) Some of these groups may get caught in the U.S. attacks, but others will surely escape -- and remain in position to conduct new acts of terrorism.

As an alternative to military action of this sort, I propose a strategy that combines global law enforcement collaboration plus moral and religious combat. It would compel the Bush administration to drop its war rhetoric and instead treat its hunt for bin Laden as a criminal investigation.

It will not be possible to put bin Laden's networks out of operation without the cooperation of police and intelligence personnel all over the globe -- including the Islamic world. The best way to do this is to brand bin Laden and his associates as mass murderers who are sought for trial and punishment under U.S. law -- as has been done with other suspected terrorists. Then, the United States should order a massive global manhunt to capture bin Laden and all of his associates, wherever they dwell. It will be much harder for an Islamic government to refuse our requests for assistance in tracking down and arresting bin Laden's associates if we indict them for multiple murders and portray this as a criminal matter. The deliberate murder of innocents is a crime and an abomination in all societies -- Islamic ones no less than any others.

Furthermore, to prevent the recruitment of additional volunteers into bin Laden's networks (or others of their type), we have to successfully portray him as an enemy of authentic Islam. Bin Laden has succeeded in recruiting followers up until now -- volunteers who are willing to sacrifice their lives -- because he has been able to portray himself as the true defender of Islam. Now, we must seek out and ally ourselves with the vast number of Muslims who are repelled and horrified by the death of so many innocent people in New York and Washington. We must encourage influential Muslim clerics to condemn bin Laden as an enemy of true Islamic belief. Only in this way can we silence him (and his kind) forever.

To win over peace-minded Muslims to our side in this struggle, we will, of course, have to show greater sympathy for their concerns. This includes, for example, the plight of ordinary Palestinians in the West Bank and Gaza, and the suffering of the Iraqi civilians who are denied basic goods and medicine due to the U.S.-backed economic sanctions. This need not entail a sudden about-face in U.S. policy, but would require greater public recognition of others' pain and suffering. After all, we are now victims too -- and this gives us a common basis upon which to ask for their assistance in a common struggle against violence and terrorism.

I know that the calls for military action will grow in volume. And I share a sense of outrage against those who killed so many of our countrymen and women. But I want the campaign against bin Laden to succeed -- both in a practical and a moral sense. Battle cries like that of Sen. Zell Miller, who called on the U.S. Thursday to "bomb the hell out of Afghanistan" for harboring bin Laden, may make us feel momentarily elated. But in the long run, it is only the pursuit of justice that can secure a peaceful world. The best way to accomplish this is for the U.S. to treat bin Laden as a criminal fugitive, not an enemy of war.