The greatest TV benefit show ever

Neil Young, Stevie Wonder, U2 and -- Fred Durst!? -- somberly and tastefully raise millions for the families of the victims of the Sept. 11 disaster 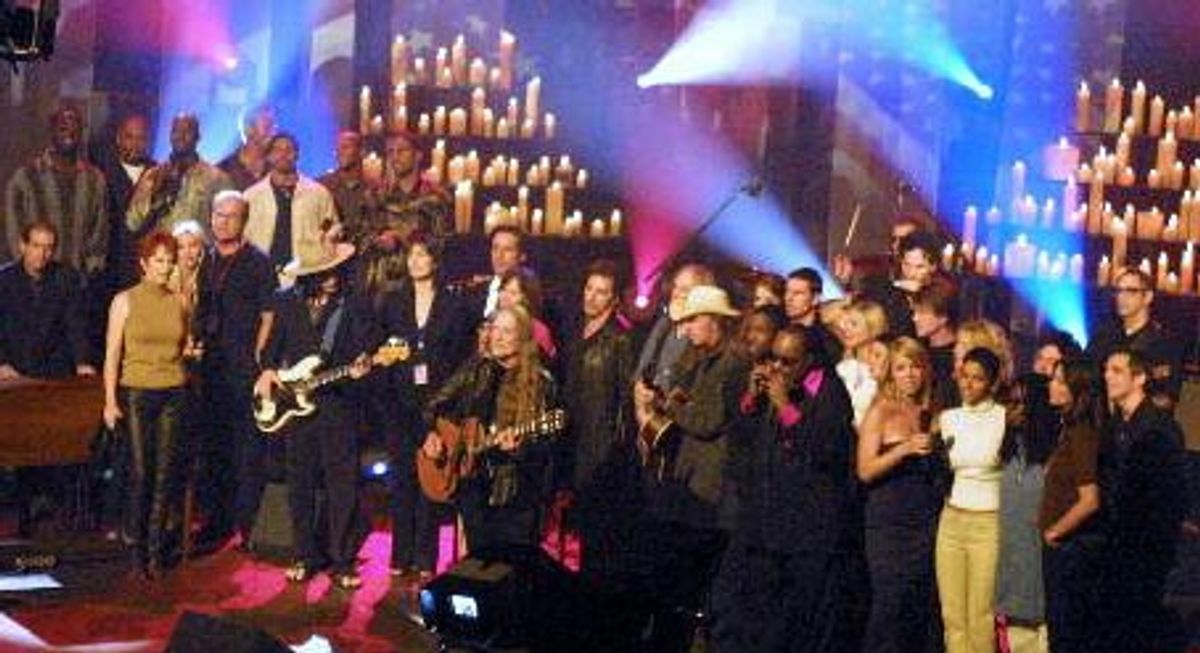 Last week, a day after the World Trade Center fell in New York, the band Weezer went ahead with a scheduled concert in Oakland, Calif. The band would have canceled, they said, but they didn't know how to do anything except play music.

That's part of what made Friday night's unprecedented celebrity telethon so good. None of the musicians pretended that they had made any sense out of the attacks -- they just played their songs. Television and movie actors read surprisingly understated and tasteful tributes to those who had died and singled out heroic teachers or friends or firefighters or cops who acted with courage and grace.

The two-hour show, put together in just days, was flawlessly conceived, directed, edited and produced. It played without commercials on 31 television and cable networks in 161 countries. Amid dozens of the most famous entertainers in the world -- Tom Hanks, Julia Roberts, Will Smith, Muhammad Ali, Bruce Springsteen, Robert DeNiro, Clint Eastwood -- the real star of the show was the somber, restrained tone.

Egos seemed to melt away in front of the camera. There were no title cards or introductions to announce U2 or Tom Cruise or Sheryl Crow from a studio in London, New York or Los Angeles. A segment ended; the lights would dim; you'd see a figure appear on screen in the shadows; a light would come on; and the person would play or read from a script. There was no applause.

The speakers would ask for donations, or explain that 100 percent of the money raised would go to a fund, administered by the United Way, that would be donated directly to victims. A toll-free number and Web page where viewers could donate cash was listed at the bottom of the screen throughout every performance and speech. The producers had set up phone banks across the country for the calls; working one of them in the Los Angeles studio where part of the show was filmed was a tableau of stars, including Jack Nicholson, Sylvester Stallone, Benicio del Toro, Jim Carrey, Ben Stiller, Kurt Russell, Goldie Hawn, Sally Field, Michael Keaton, Adam Sandler, Whoopi Goldberg, John Cusack, Al Pacino, Cuba Gooding Jr. and Meg Ryan.

The show also intercut some taped segments. There were Arab-American schoolchildren reading essays they'd written about the attacks, montages dedicated to firefighters and a moving section that pieced together moments of silence observed all over the world.

The musicians, often playing new songs, delivered uniformly nuanced and restrained performances. The show opened -- there were no intros or credits -- with Springsteen singing the mournful, unreleased "My City of Ruins." It might not have been a great song -- it lacked the anger and specificity that made the recent "American Skin (41 Shots)" so powerful -- but the emotion that he poured into phrases like "Come on, rise up" and "Tell me how I begin again" gave the song a weighty resonance. Like the other performers, he played on a spare set marked only by banks of glowing candles. His backup singers included his wife, Patti Scialfa, and longtime band mate Miami Steve Van Zandt.

The most striking performance may have been Neil Young's. In a battered straw cowboy hat, he sang an impassioned version of John Lennon's "Imagine" at a grand piano. Later, playing a massive pipe organ, he sat in with Pearl Jam's Eddie Vedder on "Long Road." From London, an artfully shot U2 performed "Walk On," from "All That You Can't Leave Behind," and seemed cool and serious behind lyrics like "I'm sick of hearing that there's never going to be peace on Earth" and "You got to leave it behind."

Some of the songs seemed obvious, but not necessarily obvious in a bad way. Everything seemed to have a new context; even sappy hits, tastefully done without bombast or tricks, could blunt a cutting edge of criticism. Billy Joel played "New York State of Mind"; Mariah Carey, in her first public appearance since a widely publicized breakdown, sang her hit "Hero"; Paul Simon did an echoing, almost contemplative version of "Bridge Over Troubled Water." Wyclef Jean began his reading of Bob Marley's "Redemption Song" almost identical to the original, but then burst into a reggae workout. Stevie Wonder, Faith Hill and Sheryl Crow all performed with large choirs backing them, while Alicia Keys and Dave Matthews went solo.

There were a few head-scratching moments. Limp Bizkit's Fred Durst, with help from a ladle of reverb and one of the Goo Goo Dolls, sang Pink Floyd's "Wish You Were Here." Tom Petty's "Won't Back Down" sounded jingoistic and as out of place as Bon Jovi's "Living on a Prayer" sounded out of date.

The celebrity pitches and stories were all brief, and focused on tragedy, heroism and tolerance rather than justice, retaliation or politics. Subtly, but clearly, you could hear the quiet voice of Hollywood liberalism, with the cue cards quoting JFK, Winston Churchill and Franklin Roosevelt.

Near the end of the night, after Canadian Celine Dion's limp, unconvincing "God Bless America," a wary Clint Eastwood growled out the final speech. "The terrorists who wanted 300 million victims," he said, "are going to get 300 million heroes, 300 million Americans with broken hearts but unbreakable hopes for our country and our future."

Willie Nelson did his best to lead everyone in the Los Angeles studio in a round of "America the Beautiful," spiced up by his inimitable acoustic guitar leads, but the song came off a bit shabby and seemingly unrehearsed, with Mariah Carey scatting and Stevie Wonder piping in awkward blasts on the chromatic harmonica. There were some sound problems, too, and it certainly looked like Nelson took the group through the song a couple more times than they'd planned. It was awkward, sure, but at the end everyone who had been singing clapped and cheered. You could see that it felt like something to them, and I suppose that's what's important.

When one person dies, we have a whole set of funeral rituals to help us get through the hardest days. But no one really knows what to do when more than 6,000 people are dead in a still-smoking pit. In New York City, volunteers were turned away, donations were given back and blood banks were filled seemingly within minutes. That left the rest of us to light candles, give money or attend vigils, which are all nice, thoughtful and meditative expressions. But these last 10 days have been hard for a million reasons, and one of them is that there really isn't a way to be useful.

The best thing about the greatest benefit show ever recorded was that they knew how small they seemed. "We all feel the need to do something," said Tom Hanks at the beginning of the show. "Those of us here tonight are not heroes. We are not healers, nor protectors of this great nation. We are merely artists and entertainers here to raise spirits and, we hope, a great deal of money."