How big a war?

Hawk Paul Wolfowitz wants the U.S. to attack Iraq. Colin Powell doesn't -- and nobody knows who has Bush's ear. 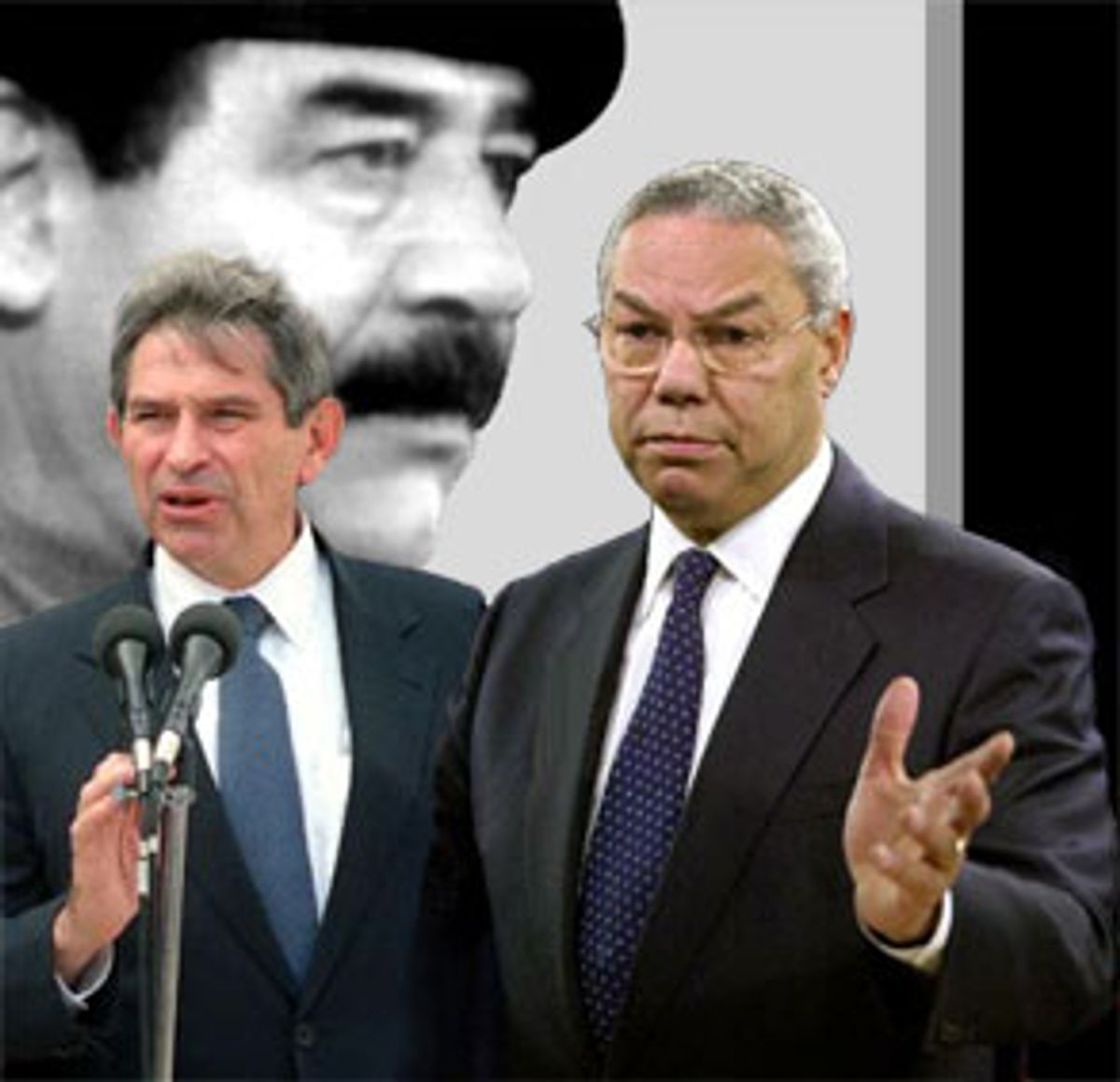 As President Bush singled out Afghanistan's Taliban regime Thursday as a potential military target, there is increasing speculation that the United States may launch some kind of attack against Iraq as part of its amorphous new war against global terrorism. With Bush holding a far-ranging mandate from Congress in the wake of the attacks on the World Trade Center and the Pentagon, a group of hawks within the administration have renewed their call for the head of Saddam Hussein.

The battle over whether to eliminate Hussein has been one that has divided Republicans since the Gulf War, more than a decade ago. A group of moderates, led by Secretary of State Colin Powell, are wary of spending political and diplomatic capital on attacking Iraq at a time when the United States must build a new coalition, with support from Islamic states crucial to its success. The hawks, meanwhile, led by Deputy Defense Secretary Paul Wolfowitz, believe that this moment presents a golden opportunity for the United States to remove Hussein.

Wolfowitz clearly believes that Saddam is involved in the terror attacks. But even if he weren't, Wolfowitz would still advocate his removal, arguing that as long as he remains in power, it will be impossible to win the war against terrorism. Powell, on the other hand, might well urge caution in dealing with Iraq even if some evidence were found that it was involved in the recent terror attacks.

The battle, a classic State Department-Defense Department schism, has reignited some old political disagreements among members of Bush's Cabinet. During the Gulf War it was then-Joint Chiefs Chairman Colin Powell who argued against sending U.S. troops to Baghdad. Others in Dick Cheney's defense department, including then-Under Secretary of Defense Wolfowitz, wanted American troops to remove Hussein from power.

But the battle did not end when American troops came home. Wolfowitz continued to speak out against the decision to leave Hussein in power, criticizing the first Bush administration as "slow to recognize the importance of removing Saddam from power." In 1998, he told the House National Security Committee, "The heart of the problem is that the United States is unable or unwilling to pursue a serious policy in Iraq, one that would aim at liberating the Iraqi people from Saddam Hussein's tyrannical grasp and free Iraq's neighbors from Saddam's murderous threats." Now, as America prepares for a clandestine war without geographical boundaries or limits, Wolfowitz is apparently pushing once again to get rid of Saddam Hussein.

From a purely tactical point of view, analysts say that an attack against Iraq would be much clearer, and in some ways easier, than venturing, probably with ground troops, into the nightmarish terrain of Afghanistan.

In Iraq, the "terrain is more inviting," says Loren Thompson, chief operating officer of the Lexington Institute. "We have the country ringed with bases and friends, and we already know where the key assets are."

But going into Iraq has real risks, both diplomatic and military, according to Paul Rodgers, author of "Losing Control: Global Security in the 21st Century." "A strong American military action would also tend to fracture the American coalition that is sanctioning Iraq," he says. "The instigators want a counterreaction in order to add to their cause; that's why no one claimed responsibility for the attack. They simply want the U.S. to strike out at them and inflame opposition to the U.S. around the world."

"If the U.S. unseated Hussein it would face tremendous dangers. The Gulf War was fought on the basis of keeping hold of the regime. A lot of noise is made about Hussein's use of the [elite] Republican Guard, but the Republican Guard was mostly deployed around Hussein. Only two of eight Republican Guard divisions were on the front with Kuwait, while Hussein kept missiles ready to launch with biological and chemical agents if his grip on power was threatened."

Of course, a full-scale war against Iraq would also likely result in tens or hundreds of thousands of Iraqi casualties, with catastrophic consequences for America's relations with the Arab and Islamic world.

A die-hard hawk, Wolfowitz is not noted for his concern for such literal or figurative fallout. In fact, in 1992, Wolfowitz authored a now-famous Pentagon memorandum advocating a full-scale attack on Russia if that country sent troops into the former Soviet Republic of Lithuania.

Wolfowitz and his faction argue that most of the rest of the Arab world wouldn't weep many tears if the Hussein regime fell. The Powellites counter that a destabilized Iraq could break into separate states, or otherwise mutate dangerously.

Wolfowitz's plans to get rid of Hussein have not always involved the use of American troops. He has long advocated heavy financial support for the Iraqi National Congress, an umbrella organization of Iraqi opposition groups. But he has not precluded the use of U.S. troops to secure a protected enclave in southern Iraq, setting up a government-in-exile there and giving anti-Hussein forces a political and military base inside Iraq.

"One Arab official in the Gulf told me that the effect inside Iraq of such a strategy would be devastating to Saddam," he told the House committee. "If this administration could muster the necessary strength of purpose, it would be possible to liberate ourselves, our friends and allies in the region and the Iraqi people themselves from the menace of Saddam Hussein."

That testimony was given during the Clinton years, when Wolfowitz was dean of the School of Advanced International Studies at Johns Hopkins University. Now that he's back as the No. 2 man at the Pentagon, he has continued his battle to convince the administration to help overthrow Hussein. Earlier this week, one administration official told the New York Times, he seemed "more concerned about bombing Iraq than bombing Afghanistan."

Powell, meanwhile, has long walked a fine line on Iraq, balancing international diplomatic concerns with often intense anti-Hussein sentiment at home. Earlier this year, facing eroding support for continued sanctions, Powell tried to tinker with the United Nations' approach to Iraq. Powell pressed the United Nations to adopt a new policy of "smart sanctions" as a way to appease both sanctions-wary European leaders and more militant forces within his own State Department and throughout the administration. The new sanctions program would have relaxed sanctions on civilian goods, but tightened controls on smuggling oil and weapons. Those sanctions were rejected by Russia, which has traditionally been Iraq's closest ally in the United Nations Security Council.

During the Gulf War, then-President Bush sided with Powell, rejecting calls from Gen. Norman Schwarzkopf and others to continue on to Baghdad. Bush's background as a legislator and, like Powell, a diplomat made him sensitive to Powell's concerns about undermining the tenuous coalition that was assembled during the Gulf War.

But the current President Bush does not have the foreign policy experience of his father, and so the question of who has his ear on key foreign policy decisions has been the topic of much speculation. During the presidential campaign, Bush tried to temper concerns about his lack of foreign policy experience and knowledge by pointing to the seasoned foreign policy hands surrounding him. But those advisors have real ideological divides over a number of issues, and so far Bush has not sided clearly with one side or the other. On some issues -- taking a measured approach to Iraq and keeping U.S. troops in the Balkans -- he has taken Powell's side, But the president backed administration hard-liners on North Korea, refusing to try to negotiate an end to that country's missile program.

Jon Basil Utley, a fellow at the Ludwig von Mises Institute, argues that many military strategists in the Bush administration live in a sheltered, theoretical world that is often woefully out of touch with reality. "Most spent their working lives as Washington policy wonks," he wrote in a recent article. "Almost none have business backgrounds. Most know little more of the world than having been with official delegations or perhaps having done some study in England when they were young. They are the brains of the 'War Party' supported by the big conservative foundations, military/industrial industries and other Washington interests which benefit from wars.

Powell has been instrumental in quelling fears among European allies worried that the new Bush administration would have little regard for multilateral cooperation or support. The so-called Powell Doctrine -- that military force should be used as a last resort, with the full support of the public and with a well-planned exit strategy -- also came as "a breath of fresh air after [Madeleine] Albright's triumphalist ravings about the 'Indispensable Nation,' writes Srjda Trifkovic, foreign affairs editor of Chronicles magazine.

But just how much sway Powell holds inside the Oval Office is unclear. Ultimately, as with most other policy initiatives in the White House, Vice President Dick Cheney's role will be key. When word of the Wolfowitz/Powell split hit the press this week, Cheney's role remained unclear. An article in USA Today put him on the side of the Iraq hawks, while a New York Times article indicated he may be closer to Powell.

"I don't know where Cheney is at the moment on Iraq," says Phyllis Bennis, a fellow at the Institute for Policy Studies. "What he brings is his oil industry, anti-sanction perspective. Cheney led the fight to end sanctions against Iran. At the beginning of this administration, there was a lot of thinking that he might take over the same kind of anti-sanction stance vis-a-vis Iraq.

"Companies like Haliburton [where Cheney served as CEO before joining the Republican ticket] are linked more broadly to the whole of rebuilding Iraq's oil infrastructure. The oil companies are going to clean up when the sanctions are lifted."

Thus far, the Bush administration has not shown its hand, but it has been relatively cautious. Meanwhie the battle for Bush's ear continues between Powell and Wolfowitz. With America poised to begin the most ill-defined, and perhaps the riskiest, military campaign in its history, far more will hang on the Powell-Wolfowitz debate than a clash of ideas.