As jingoists call for a New Sincerity, we need irony -- the serious kind -- more than ever. 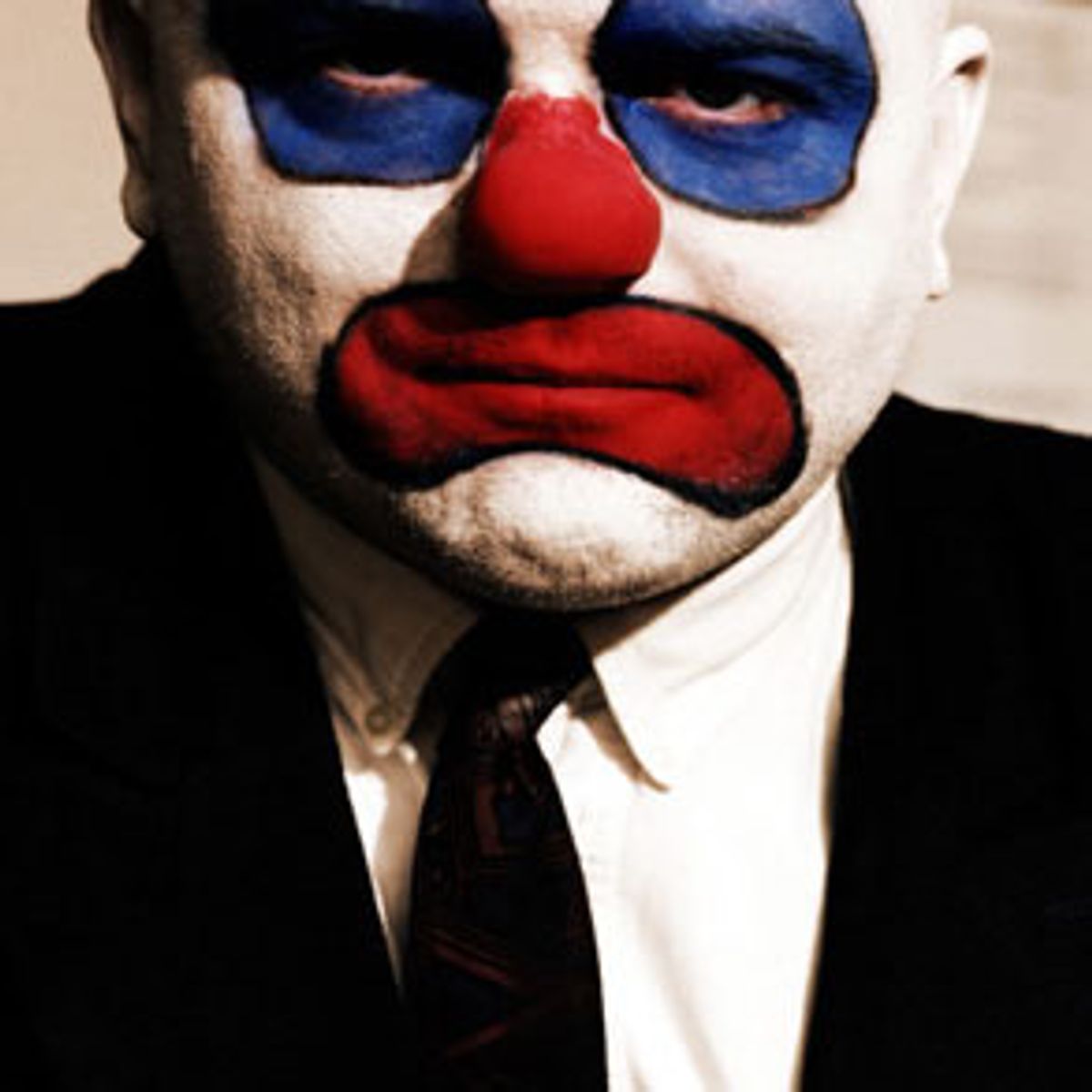 Well, isn't this ironic? Just when we need an ironic sensibility to remain cleareyed in dangerous times, we're told irony is obsolete. And this from some people who've made it their business to peddle a cheapened grade of irony over the past couple of decades until we've almost forgotten the true meaning of the word.

I'm thinking we need a profoundly ironic outlook to avoid being swept up in the new jingoism, to see that the best intentions might lead us further astray, to protect ourselves from the manipulative propaganda that envelops us in wartime. I'm feeling, suddenly, very much out of step with the latest "trend."

"There's going to be a seismic change. I think it's the end of the age of irony," pronounced Graydon Carter, editor of Vanity Fair and former editor of Spy, his sound bite last week rippling out into dozens of head-nodding Op-Eds. "Things that were considered fringe and frivolous are going to disappear."

"Maybe we've just witnessed the end of unbridled irony. Maybe a coddled generation that bathed itself in sarcasm will get serious," self-flagellated 25-year-old Camille Dodero in the Boston Phoenix and on Alternet.org. "Maybe we'll stop acting so jaded and start addressing the problem."

In Time magazine, essayist Roger Rosenblatt lashed out against "the vain stupidity" of "ironists" who try so hard to see through everything, they see nothing. One thing we don't need in this "new and chastened time," Rosenblatt is certain, is a bunch of ironists.

Well, wait a second. What is irony and why are people saying such mean things about it? Clearly irony is a vague enough concept to have been freighted with a wide collection of negative connotations. The word seems to represent, in the current public discourse, the nihilistic shrug of an irritatingly shallow smartass. (Thus: Wipe that smirk off your face, young ironist, while terrorists are attacking us!) Somehow, irony has come to be a handy shorthand for moral relativism and self-absorption, for consuming all that is puerile while considering oneself too hip to be implicated in the supply and demand economics of schlock. With numb and glib.

If any of this does bespeak a kind of ironic stance, it is one of severe ironic detachment. That's the low-grade irony Jedediah Purdy made his whipping boy a couple of years ago in his book "For Common Things." The irony he bashed was "a quiet refusal to believe in the depth of relationships, the sincerity of motivation or the truth of speech -- especially earnest speech." Letterman, Seinfeld, an entire culture bracketed by air quotes had taught Americans that "nothing is real, true or ours. Irony makes us wary and abashed in our belief."

My first reaction was, and is: Were we ever so callously lost as a society? Not by Purdy's definition. Put under a microscope, Americans turn out to be mawkish to the marrow. For every Bart Simpson there is an Oprah, for every Dennis Miller a Deepak Chopra. As 27-year-old Purdy was growing up in West Virginia, New York may have appeared the City of Broad Cynics, but when Joan Didion (who lives there) dissected the Big Apple's tabloid culture of the late 1980s, she found it sentimental to the core. Yes, Seinfeld came to live there, too, but who watched the show to identify with the cast? No, they were us minus the ability to feel and learn, their faulty personal navigations systems throwing them hilariously onto the rocks, unable to steer clear of the reefs even in a sea so placid that "nothing happens."

My thesis here, that over the past decade ironic farce has been largely consumed as a side dish to sentimental earnestness, is borne out in pretty much every plot in the fiction of Douglas Coupland, from "Generation X" (supposed demon seed of uncaring irony) on. In "Microserfs," the sarcastic patter of the young entrepreneur is interrupted by Dad at the door. Dad has been laid off by IBM, is reverting to childlike helplessness, is curled up on the couch with the football helmet of his other son, long dead, etc. Wicked nihilism this is not.

For further proof, see what Coupland wrote last week for a Canadian newspaper before we knew irony was dead. Yes, stranded on his book tour in Madison, Wisc., he trains his pop-ironic lens on the place, "serene and boring and blond and far away from big ticket U.S. targets like NASA, Disneyland " And, no surprise, it's a lot about Me. "I had this creepy feeling, the feeling that I might have fallen into a science fiction dream, one in which everyone on earth was forced to stay where they were on the morning of September 11, 2001."

But the windup is idealism of Purdy-pleasing proportions: "Many ecologists say that the best thing that could happen to Western society would be for everyone to stay where they were for 20 years -- no travel allowed. This way people would be forced to commit to local communities and issues and be forced to establish roots. ... the era of socially and politically disengaged middle class roaming needs to end before true lasting ecological change is possible."

So fine. Because I doubt shallow cynicism ever really did dominate the national mood, I'm happy to join in the chorus of goodbyes to the über-smartass, the kind of "ironist" so detached that heart and head were all but amputated.

Here is one dictionary definition of irony: "Incongruity between actual result of a sequence of events and the normal or expected result." That kind of irony might note that America, for all its effort to shine a beacon of freedom throughout the world, is seen as an imperial oppressor by large swaths of the Islamic world. That kind of irony would wonder if in this new battle on behalf of freedom, we may rush to strip away civil liberties. That kind of irony would wonder whether this new kind of war, waged to make us safe from terrorist attacks, might plunge the world into a far more dangerous conflagration.

To note these ironies is to engage yourself in the grave purpose at hand and take some responsibility for helping to think it through -- and that's the opposite of ironic detachment.

Call it, then, Ironic Engagement. One 20-something who championed this is Randolph Bourne, a member of Generation Lost who died of influenza in 1918 at the close of the First World War. Bourne had opposed that war and predicted a spiral of more bloodshed to grow out of it. A brilliant social critic credited by some with fathering America's counterculture, Bourne considered his sharpest tool irony. "The ironic life is a life keenly alert, keenly sensitive, reacting promptly with feelings of liking or dislike to each bit of experience, letting none of it pass without interpretation and assimilation, a life full and satisfying -- indeed a rival of the religious life."

"The ironist is ironical," declared Bourne, "not because he does not care, but because he cares too much."

The First World War, the so-called Great War, wiped away blithe optimism and made ironists of us all, argues historian Paul Fussell. His own ironic awakening came as an infantryman wading through gore during the Second World War, the so-called Good War. Just as there wasn't much great about the first, there wasn't anything wholesomely good about the second, Fussell argues in his memoir "Doing Battle." "I've been an enemy for years of the concept of the 'Good War' and of all the sentimentalizing that's done by people who didn't fight it or who profited from it one way or another," he told an interviewer for the Atlantic magazine. "It was absolutely necessary. Hitlerism had to be wiped out and so did the Japanese empire, no question about it. But all wars are horrible, and flimsy, superficial war talk is always extremely dangerous."

If Bourne and Fussell make my case for a new dispassionate and skeptical Ironic Engagement, so too does Jedediah Purdy. He was quoted in the New York Times yesterday saying a little bit of irony might do the country a world of good at the moment: "In peaceful and prosperous times," irony is a way of "keeping the passions in hibernation when there is not much for them to live on, but another kind of irony can also work to keep dangerous excesses of passion and self-righteousness and extreme conviction at bay."

Some people, including the droll Michael Kinsley, find it ironic that Purdy would now embrace irony. Actually, however, Purdy said about the same thing in "For Common Things," where he did side with an intelligent and resourceful irony against "the human reserves of pompous self-seriousness, and the leaden earnestness that always threatens to run molten."

Yes, it's going to run pretty molten over the next weeks and months to come, and so we had all better don our protective suits of irony.

Right now we are still, in a sense, sitting in an agonizing funeral and everyone knows it is not appropriate to laugh at funerals. That is why claims that we have entered a new age of sobriety so resonate. It won't and can't last. People need room to breathe out, to laugh. But, in one sense, to declare an end to irony is to close the coffin lid on laughter. As New York magazine editor Mark Horowitz said over the weekend, "I think it's especially funny that the editors of Vanity Fair have become the new imams, spouting moral seriousness and declaring that all frivolity must come to an end. If tourism, real estate and finance in N.Y. collapse, then people will really be earnest and serious. If we lose our frivolity, that really is a victory for terrorists."

If times do further darken and that frivolity gives way to a blacker form of humor, then a deeper sense of irony will certainly live there, as well. "Northern Ireland isn't exactly a comedy capital," allowed Mathew Mallon, writing in the Vancouver Sun on Saturday. But "as all my Belfast relatives will tell you, living in a constant state of terrorist siege tends to sharpen your sense of the absurd and ironic. ... Out of misery comes humour, often of an ironic nature. It is a life affirming response."

The day of the smartass shrug may be over. The sudden death of more than 6,000 countrymen will do that to a culture. But let us hope a golden age of irony, engaged irony, is upon us. It may be all that stands between us and tragic hubris.