Like Vietnam chronicler Michael Herr, Russian journalist Artyom Borovik captured the hallucinatory hell of war -- but these days it's Borovik's account of Afghanistan that seems the most relevant. 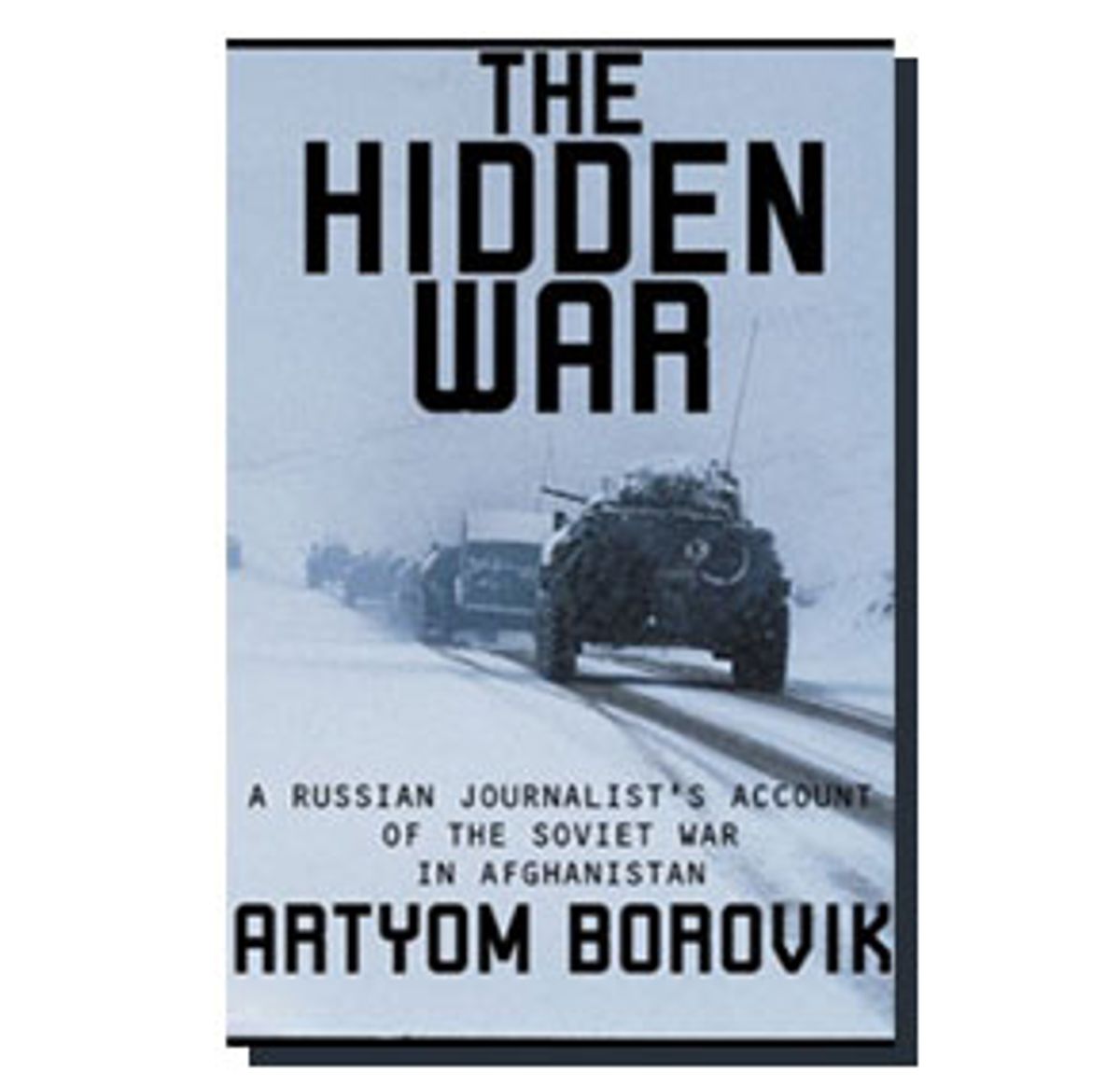 In recent decades, two distinctly different writers have vividly evoked the ugly magic of war with brilliance and emotional force. One is Michael Herr, whose sometimes hallucinatory "Dispatches," about Vietnam, was published in 1977. The other is Artyom Borovik. His 1990 book, "The Hidden War: A Russian Journalist's Account of the Soviet War in Afghanistan," pairs novelistic writing and momentum with lucid firsthand accounts of the dramatic and dreary business of fighting a ground war in Afghanistan.

While Herr's "Dispatches" is the more well-known in this country, Borovik's book may be even more relevant as the United States prepares to drink from Afganistan's "poisoned chalice," as one British commander described this benighted military terrain.

"The Hidden War" is not a dry analysis of Soviet policy or a clinical deconstruction of military operations, but the product of a gifted chronicler at work in a nightmarish landscape where people speak of themselves in the past tense:


During the ferocious battles near the kishlak [Afghan village] of Malym-Gulym ... the commander of the platoon, Lieutenant Lobachesky, was shot straight through his heart. Major Novikov, who heard the lieutenant's last words, later told me, "Believe it or not, Lobachesky told the command post by walkie-talkie, 'Allow me to break this connection ... I've been killed.'"


[Major Said Ismail cuts] two thick pieces of rope that gird the sheep at its front and back. Then he pulls a brand-new submachine gun out from under the beast's belly. "Check that one!" he shouts to me, nodding toward a second sheep.

I'm not as adroit and catch the beast only on the second try. Hugging the sheep around its waist, I feel two machine guns without magazines, a bundle of three grenades tied underneath.

and where even the most banal home products are tickets to eternity:


We enter one of the captured dugout shelters. Bowls of lamb pilaf, still steaming, rest on the floor. Three corpses are slumped nearby. One of them clenches a spoon in his hand. Another grips a submachine gun in his frozen fingers.

In the corner we find a thermos. A trophy thermos. Even though it is empty, it seems unusually heavy. Valery Pavlovich Zalomin, who was one of the first to arrive on the scene, warns that we have to be careful with such a souvenir. He is right. I unscrew the bottom of the thermos and find a curious blob of black goo. It turns out to be a contact explosive from Pakistan.

"Tonight you would have learned your lesson," Zalomin tells me as he twiddles a small piece of the paste in his fingers. "After supper you would've poured some hot tea into your new thermos, expanding the paste and thus triggering an explosion from the increased pressure. It would've been the last time in your life you ever made tea."

The incident leaves me wondering about the sheer inventiveness of these bandits, about their rich inexhaustible imaginations. Inside every fortification point -- the bunkers, the pillboxes, the four-level underground dugouts -- the soldiers find booby-trapped pens, watches, lighters, tape recorders, and the like. Hidden death has been camouflaged so masterfully that only someone with a practiced eye can see it.

The specifics of the Soviet invasion of Afghanistan (it's a cliché, albeit true, that the nine-year war became the USSR's Vietnam) might have little in common with our present situation, but Borovik's account is grimly compelling to read in the context of the current international crisis. What his Afghan dispatches underscore is how very unmovielike war is, not only in the details, but in the broad plotting. Real wars don't wrap up neatly, with the good guys scoring clean and satisfying victories; they can go on and on in messy, gruesome, vague circles for years with neither side prevailing. (Borovik's personal story -- as it developed after he published "The Hidden War" -- is also tragic; in 2000, at age 39, he died in a Moscow plane crash, which may not have been an accident. More about that later.)

"The Hidden War" is presented in two parts. Borovik wrote the first part in 1987, when he was 27, and the second part after Ogonyok, the Russian magazine in which much of "The Hidden War" was first published, sent him to Afghanistan in January and February of 1989 to witness the final phase of the withdrawal of Soviet troops.

In the book's introduction, in a passage that could just as well be about the United States' experience in Vietnam, Borovik writes: "We thought we were civilizing a backwards country by exposing it to television, to modern bombers, to schools, to the latest models of tanks, to books, to long-range artillery, to newspapers, to new types of weapons, to economic aid, to AK-47s. But we rarely stopped to think how Afghanistan would influence us."

The single most haunting image in the book isn't from some dramatic battle scene, though there are those, too, but of a woman standing outside Borovik's Jalalabad hotel, holding an infant in her arms: "The baby had died on the trip from Pakistan two days ago. But the mother still refuses to give up her child. His tiny body has stiffened and turned blue. Of all the things I've seen in Afghanistan, this strikes me as the most horrible."

What makes Borovik's account extraordinary is that he keeps looking and, more than that, describing what he sees in the most evocative terms -- yet he's not afraid to weave in his own dreams and speculations. They strengthen the blunt reporting by pulling us into the out-of-balance mental state of the battle-weary, the terror-fatigued -- where the animate and the inanimate are all in the war together:


One time I woke from a nightmare in a cold sweat. In my dream I'd seen a field strewn with corpses. Even awake, I could smell the vivid violetlike odor of carrion. In the morning, I learned that my refrigerator was broken. It was shaking feverishly (it was afraid, too, the bastard) in a gigantic pool of blood. The blood was still oozing out of the freezer, which my predecessor had packed tight with meat. Despite all my efforts to scrape the linoleum clean, the large bloodstain had remained on the kitchen floor ever since. Every time I saw the bloodstain it reminded me of the dream, as did the war itself -- a running, real-life nightmare . . . One of our old-timers in Kabul tried to reassure me. "Spooks, buddy, hallucinations!" he told me. "It'll only get worse."

And sure enough, it does -- both in reality and in his imagination. The clouds rushing across the Kabul sky are, for Borovik, the ghosts of helicopters that have been shot down. In 1987 the introduction of Stinger missiles, a gift from the U.S. to the Afghan mujahedin, "puts an end to our massive use of choppers," making it much more difficult for the Soviet military to quickly evacuate the wounded. "For nearly 50 years," Borovik writes, "we prepared for a global war, but in Afghanistan we've had to conduct small-scale warfare. We weren't prepared for it at all."

When extracts of "The Hidden War" were first published in Russia, exposing, as they did, the moral bankruptcy and strategic failure of the Soviet invasion, it caused enormous controversy, even though glasnost was in full swing. In the book's epilogue Borovik tells of getting the book manuscript back from government censors with 200 serious deletions that he protested over a period of three months before finally prevailing.

That, however, was just the beginning of his battle. Once "The Hidden War" was published, the military and nationalistic press attacked him through numerous articles, accusing him, among other things, of never having spent time in Afghanistan (some of the article titles: "What Artyom Borovik Neglects to Say," "The Hidden Heroism," "The Truth Does Not Tremble Before the Real State of Affairs"). And the Writers Union of the USSR refused him membership because, the organization claimed, "I had shamed the Soviet corps of generals." Nevertheless, "The Hidden War" was a popular success, both in Russia and abroad.

After "The Hidden War" was published, Borovik launched a media company, Top Secret, that published a newspaper, produced a weekly TV show and a weekly magazine, all of which focused on investigative journalism. Borovik's continuing commitment to digging up unpleasant truths about Russia's masters of war and commerce might have resulted in his early death, in his father's view. In an article, "From Russia, With Love for Freedom," written by Borovik's father, Genrikh Borovik, published on the International Press Institute Web site, the elder Borovik, also a journalist, contends that the Top Secret TV show was canceled in 1999 by the state-owned RTR TV "at a financial loss despite its broad popularity." He goes on to write, "Shortly after the cancellation by RTR, Mikhail Lesin, Russia's minister for press and information, took a trip to New York to meet with Artyom's American partners. At lunch he said that authorities would probably take 'necessary measures' against Top Secret in the near future ..."

"Three months later, in March 2000," continues Borovik's father, "Artyom took part in a popular talk show ... where he discussed attempts to strangle independent media. He mentioned unlawful economic pressure and continual threats. He spoke about authorities ambivalence toward material that vividly exposed cases of corruption in top echelons of power. Artyom's interview aroused great interest among the viewers, some of whom called the studio. The last phone call was chilling. Male voice: 'If you are so honest, why are you still alive?'"

Three days after his appearance on the TV show, Borovik's YAK-40 aircraft crashed on takeoff at Moscow's Sheremetyevo Airport, killing him and eight others. It's become a long and complex story with demands for an independent investigation, charges of intimidation of the independent press by the Putin government and countercharges of corruption in Russian media.

But apart from his own story, which is not likely to get untangled in the foreseeable future, Borovik left behind a classic work of war correspondence -- battle literature that is as affecting to read today as it was a decade ago, but for very different reasons.