Afghanistan's Northern Alliance may be the enemy of our enemy, but it has its own grim history of violence and abuse of power. 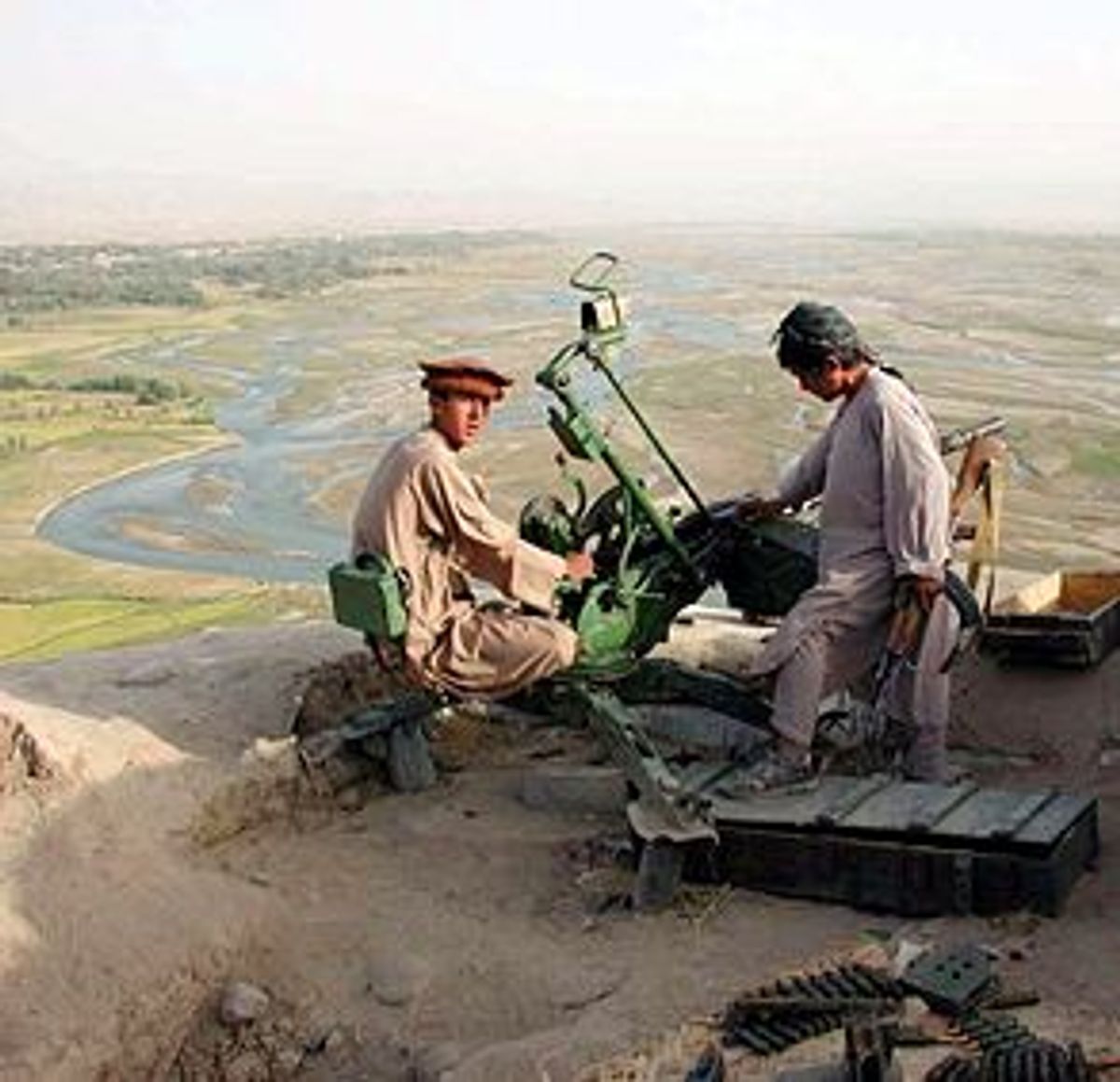 As the United States gears up for a seemingly inevitable military conflict in Afghanistan, the Bush administration speaks with great excitement about the support it expects to receive from an anti-Taliban group called the Northern Alliance. Though it only holds about 10 percent of Afghanistan, Congress is discussing sending the Alliance money and weapons, and the Pentagon reportedly has tentative plans to train it with the help of Special Forces units.

Last Friday, Defense Secretary Donald Rumsfeld said the rebels "know the lay of the land" and "can be a lot of help" in a campaign against the Taliban and Osama bin Laden. The press has dutifully followed the lead. The New York Times, in its lead Monday story, pointed out that the Northern Alliance has enjoyed the support of Iran and Russia, and supporting it would therefore "help the United States balance the interest of its outside partners." The Washington Post noted that the "rebels have been fighting the Taliban since the mid-1990s, and no one knows the territory better than they do." The Post quoted an Alliance leader as saying that there is "a unique opportunity on the horizon" to topple the Taliban and that his group is more than willing to "fight against terrorism." On the Fox News Channel, a defense analyst named David Isby called the rebels the "on-the-ground alternative to the Taliban."

Lost, however, amid the hype around our newfound allies, which ruled Afghanistan from 1992 until 1996, is their own troubling history -- including shocking human rights records, thievery and a sheer governing incompetence that in large part led to the rise of the Taliban.

"Many of their leaders should be indicted for war crimes," says Patricia Gossman, a consultant on human rights in South Asia who has traveled widely in the region. "Some top [alliance] commanders have records almost as bad as that of the Taliban."

Summing up the group's four years in power, a Human Rights Watch report issued in July reports that there "was virtually no rule of law" in any of the areas it controlled and that its constituent members, constantly warring with each other, were guilty of summary executions, arbitrary arrest, torture and "disappearances." One terrible outburst took place in 1995, when one faction of the group captured a neighborhood in Kabul that had been an opposition's stronghold. The "troops went on a rampage, systematically looting whole streets and raping women," according to a State Department account of the events.

The level of ignorance about the anti-Taliban rebels is so great that the government and press don't even call it by its proper name. The Northern Alliance was the name of a coalition of forces, including some in the current anti-Taliban movement, that existed in the early-1990s. The organization that the government and press now speak of so fondly is actually called the United National Islamic Front for the Salvation of Afghanistan, or the United Front. The United Front supports the Islamic State of Afghanistan (ISA), the regime ousted by the Taliban five years ago.

But it was disgust with the United Front that paved the way for the Taliban, which arose in 1994 and effectively gained power two years later. Since then, the various United Front factions have been mostly on the run, though they have all continued to be responsible for terror attacks on their enemies. In 1997, in the strategic town of Mazar-i Sharif, Junbish troops systematically slaughtered at least 3,000 captured Taliban troops, some of whom were stuffed down wells and blown up with hand grenades, according to accounts cited by Human Rights Watch. The United Nations all but ignored the Taliban's demand that it investigate the massacre. Of course, the Taliban was less interested in promoting human rights when it took back the city and slaughtered between 2,000 and 8,000 people in the streets.

In September of 1998, troops believed to be under the command of recently slain military leader Ahmed Shah Massoud fired rockets into Kabul. One hit a busy market, where as many as 180 people were killed. In late 1999 and early 2000, people fleeing from villages near Sangcharak reported to humanitarian workers that United Front troops, who had held the town for four months, had carried out summary executions, burned down houses and conducted wide-scale looting. Some of those executed were reportedly killed in front of family members.

Even today, the United Front is less of a front than a very loose coalition united by its hatred of the Taliban. It is torn by factional clashes and personal rivalries, with the various partners so mistrustful of each other that they have never merged their military structures and have no united strategy to confront the Taliban.

But the United Front's ugly side can't be a surprise to the press. Since Sept. 11, several thousand people, presumably many of them journalists, have requested the July report from Human Rights Watch, which details much of what is reported here. Instead, most reporters and pundits seem to be patriotically turning a blind eye to our new partner's shortcomings. Last weekend, columnist George Will effectively wrote that any partner will do in the war on the Taliban. He approvingly cited Churchill, who once said that he'd find something good to say about the devil if Hitler invaded hell.

During the 1980s war against the Soviet Union, some members of the United Front received support from the CIA (as did, of course, future members of the Taliban, and quite possibly Osama bin Laden). Among its primary leaders today is Burhanuddin Rabbani, who served as president when the ISA ruled Afghanistan and is the titular head of the United Front. Rabbani's faction, known as Jamiat, was badly weakened on Sept. 9, when two Arabs posing as journalists killed its principal military leader, Ahmed Shah Massoud, by blowing themselves up during an interview with him. Generally considered to be the best of a very bad lot, Massoud was a brilliant military strategist who earned the nickname of the "Lion of Panjshir" during the fight against the Soviets. American intelligence operatives now say his murder was the work of bin Laden operatives, and was designed to weaken the Taliban's opposition following the attack on New York and Washington, which followed two days later.

Other central United Front figures include:

Indeed, as soon as they toppled the leftist government of Afghanistan left behind by the Soviet Union, the mujahedin turned on each other. "Before long, the Afghan capital was beleaguered by factional fighting accompanied by indiscriminate shelling, rocketing and ruthless street combat," says a report from the time by Charles Norchi, an Afghanistan specialist at Sarah Lawrence College. "During the first eighteen months of 'liberation' from the communists, civilian casualties in Kabul alone rose to nearly 75,000, including 12,000 dead."

By 1994, infighting had worsened. Dostum, the former communist, formed an alliance of convenience with Gulbuddin Hekmatyar, one of the most rabidly fundamentalist leaders from the anti-Soviet war, and together they forced Rabbani and Massoud to flee Kabul. The fighting left about 25,000 people dead and one-third of Kabul was reduced to rubble. That same year, the two major Shi'a parties within the United Front, Hizb-I Wahdat and Harakat-I Islami, turned on each other. Hundreds of people were killed and thousands fled for refuge in Pakistan. "The country was carved up among the various factions, with many mujahedin commanders establishing themselves as virtual warlords," according to the Human Rights Watch report. "The southern city of Qandahar was particularly precarious. [It] was divided among different forces, and civilians had little security from murder, rape, looting, or extortion."

By 1996, the Taliban had taken firm control of the country, though the ISA/United Front still holds Afghanistan's United Nations seat. Of course, even some people familiar with the United Front say that the Bush administration has no choice but to work with it. "The problem now is forming a stable government that won't be a threat to the world," says Barnett Rubin of New York University. "Then you can try to improve human rights."

The irony here is that the philosophy that says "The enemy of my enemy is my friend" is, of course, precisely what helped produce the current disaster in Afghanistan. For it was the CIA's former allies in the anti-Soviet war who subsequently destroyed the country, and our onetime friends have been responsible for many major terrorist attacks of recent years.

It's hard to say what a United Front government would look like because the factions that comprise it have such diverse beliefs and goals. They are Muslim traditionalists who favor a state in which Islam plays a central role, but are generally not militants. Massoud, who was most revered in the West, spoke French and was relatively cosmopolitan. Dostum, a former communist, comes from a secular orientation. Nor is the United Front as anti-Western as the Taliban -- then again, no one is -- but their current embrace of the United States is in part an opportunistic attempt to win military and financial backing.

Their stance toward women is equally complicated. Some of the first decrees putting restrictions on women's dress were issued when Rabbani was president, though he was never able to implement them due to his limited hold on power. At the same time, until the Taliban took power women were still allowed to work and go to school -- some held jobs in government ministries and as educators.

Gossman believes that the U.S. should back efforts to unite an emerging group of tribal elders, former officials from a number of past governments, a variety of exile groups and those United Front officials who are not tainted by their wartime acts. This group could link up with the so-called Rome Process -- which centers around King Zahir Shah, who was deposed in 1973 and lives in Italy -- which aims to write a constitution and establish a true national government. That's a good thing, since under the Taliban the only state activities that function are the military and religious police.

Meanwhile, the U.N. should ensure that the old warlords don't return to power by establishing a war crimes tribunal to try suspects from the United Front and the Taliban. "Blindly backing the Front without regard to the human rights records of some of its commanders will just put Afghanistan back to where it was before," Gossman says.

But in a time of tumult, the likelihood of a just solution might not be that strong. King Shah, for example, supposedly was to meet this week with representatives from the United Front and other groups, to see about possibly forming a coalition.

Shah is important because he is Pashtun, an ethnicity that makes up 40 percent of the country and is the Taliban's greatest base of support. The United Front, meanwhile, is made up largely of Tajiks, Hazaras and Uzbeks, which make up roughly 25 percent, 19 percent and 6 percent of the country. The partnership of the Shah with the United Front, therefore, could be formidable.

And as a result, with the world seeming to coalesce against bin Laden -- and, by connection, his defenders, the Taliban -- the United Front is suddenly making powerful new friends that virtually guarantee that its past may be cleansed, at least for a little while.