Once fond of clucking at us, France has found a new love for America. 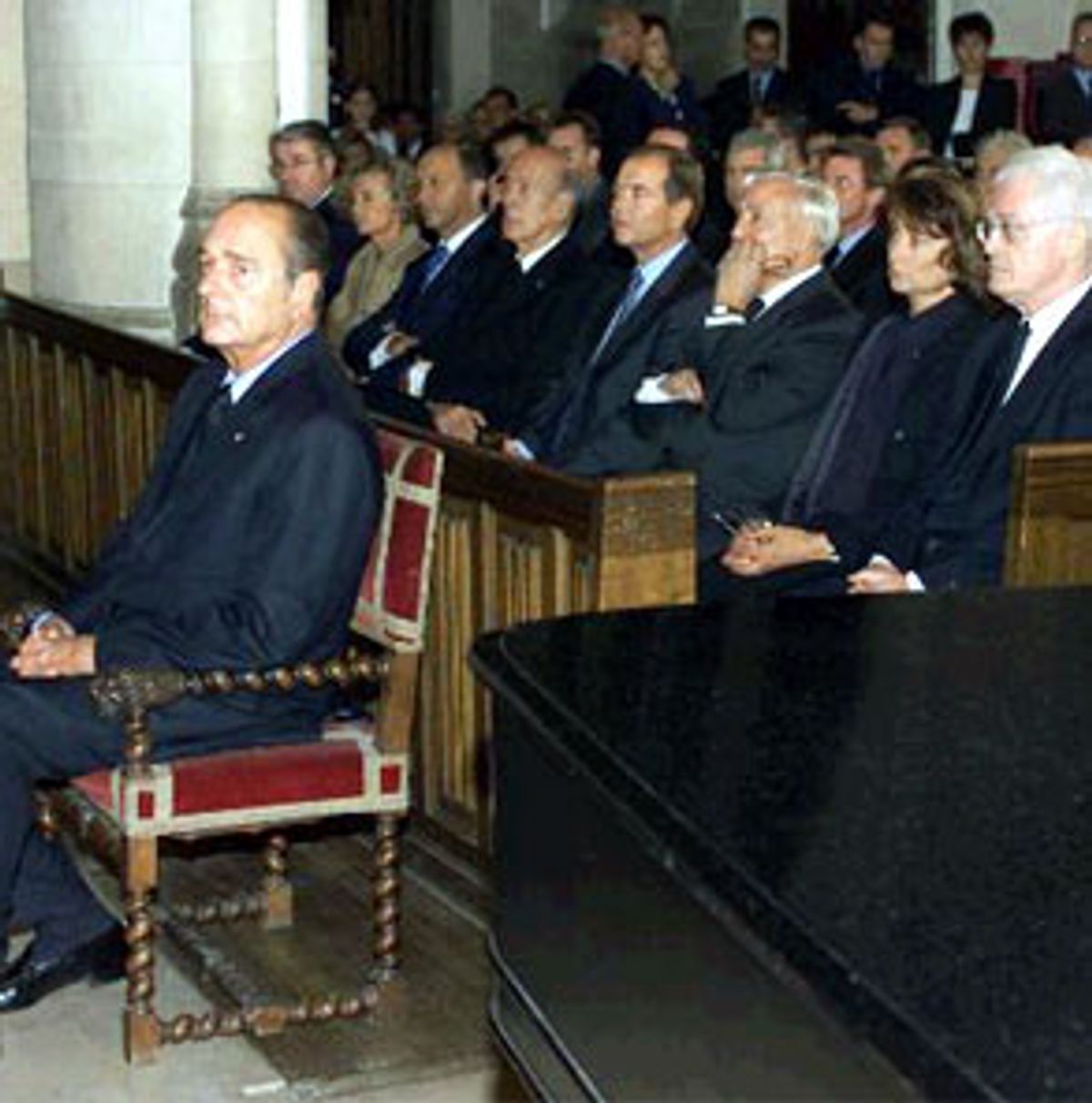 These last two weeks, French people have been saying things that I am convinced they could have never said before, such as: "We are all Americans now." This was an instant emotional response to the World Trade Center and Pentagon attacks, uttered by people on the streets. French families invited Americans stranded at Charles de Gaulle airport to come home with them. Whole villages in Normandy got out their American flags. French people brought red roses to the American Embassy and pinned notes to them saying things like, "You helped us so much during the war, and now it's our turn to support you."

During three Europe-wide minutes of silence on Sept. 14, a gray-haired French man carried a flag to Notre Dame that he hadn't taken out since the liberation of Paris. "I'm still old enough to remember our debt to the Americans," he said. "I'm paying homage to the American people." French TV stations used "The Star-Spangled Banner" as a jingle between regular programming, and networks devoted hours each day to covering every aspect of the attacks. People on the street asked what they could do for America. Schoolchildren have written cards and made drawings of our two flags waving side by side, and French people sent checks to the American Hospital in Paris to help the families of the victims.

Too often the news from France is that French people don't like us, don't approve of our self-absorption or don't appreciate the noisy invasion of our pop culture and language. But the recent shows of solidarity, tokens of gratitude and affirmations of friendship have convinced me that the love-hate relationship between France and the U.S. has more love in it than hate.

This week in France, where terrorist threats are about as routine as earthquakes in California, schoolchildren have been recounting their plane crash nightmares and sirens have been sounding off and on all day. Thousands of police are on the streets, a few dozen bomb threats are made each day, the garbage cans have been sealed and the recycling bins removed -- the trash and the wine bottles pile up on the street. During a recent television roundtable, someone asked, "Are we all Americans?" The answer, for the most part, seemed to be yes.

France, like the rest of the world, has always kept a close eye on us. But this time they weren't just watching the stock market or the marketing trends, the pop charts and the street fashions. America talked about its loss of innocence on Sept. 11. But for France, it was innocents that were lost. Not just the children of Americans, but of civilization itself.

There was a special service at the American Church in Paris on Sept. 13 attended by President Chirac, the prime minister, the mayor and other French political and religious leaders. It included spirituals, instrumental and church music, and sermons of condolence and tolerance by a priest, a Muslim and a rabbi. As the dignitaries filed out, the line backed up, and an American man in the crowd -- who had probably felt that the ceremony lacked a certain comforting patriotism -- quietly started singing "God Bless America" a cappella. The American soprano Jessye Norman was there in the crowd, and she joined in, her hand resting on her throat, as if to keep that giant voice on the scale of the assembled, who had trouble finding their voices at all.

A friend forwarded an e-mail from a friend who had seen the second explosion from the street, having arrived 10 minutes late for work at the WTC. He saw several people die before he started running for the Hudson River. "I will never ever ever be the same again," he wrote. Since it's impossible to understand the abstract notion that the world will never be the same, I keep thinking back to other tragedies for clues to how history might repeat itself. My Scottish friend's mother has been telling her about how during the Cuban missile crisis, she rode the bus in Glasgow, crying that she would never have children. I think of all the war veterans and Holocaust survivors I have interviewed, how they were happy again, the world all right.

Since I have been lucky most of my life, I've been playing back scenes of California's 1994 Northridge earthquake, when I felt in my bones for the first and only time that I might die. After it was over, I watched people pack their cars and start driving back to the Midwest or the East Coast or wherever it was they called home. I said to myself: I don't want to die here. Los Angeles is not my home. I was moving to Europe two months later anyway, so when the firemen came and told us that we had 15 minutes to get our possessions together, and that we might never go back, I told myself it was a blessing in disguise, a way not to have to figure out what to do with all my stuff. When I moved to Paris, I wrote gushy, I'm-in-love postcards to my friends, telling them that I had finally found the place where I wanted to live and die. When I returned to my Paris apartment on Sept. 9, having spent the summer in the States, I felt like I was home. That home was a place I had chosen.

But that feeling crumbled a little the other night, when I found myself singing "God Bless America" with a bunch of strangers at the American Church. Normally, this kind of behavior would have alarmed me. Living elsewhere might make a person feel more American, but I have never called myself an "expatriate" (though when Bush took office I joked that I was going to start, in the "before" days when one could make cheap jokes like that). Normally I don't seek out the company of other Americans, don't go to the Fourth of July picnic at the Embassy or frequent the American bars. I was glad to get e-mails from family and friends telling me that they were all right, but felt left out when I sensed that they felt my absence spared me the full impact of the news. It was strange to hear the bad news not from Peter Jennings but his French equivalent, Patrick Poivre d'Arvor; to hear the same French newscasters who had so dispassionately covered the American elections recite prose poems about how America was not self-destructing at its own hand but had been brought to its knees by outside invaders on its very own soil, struck right through the heart.

The French might have been sympathetic converts, but I suppose I just wanted to share my grief with the real thing, so I found myself in a church singing an anthem I would normally have been too embarrassed or suspicious to sing. Why was it that I could barely manage to whisper in the end, as the song closed with "my home sweet home." Why did the words seem cruel?

I have needed my country before, felt its absence during private heartbreaks -- the death of my grandfather, the accident that broke my nose, my presidential candidate's loss. But I have never felt that my country might need me. For the last two weeks, moved by shock and compassion and not compelled to take political sides, we had come together. But it was impossible to know if we would stay that way. Suddenly it seemed that the life I have led for six years, blithely hopping on planes and splitting my time between two continents, my citizenship not to a place but to a world -- might have come to an end. That maybe home wasn't something you could choose after all, but that my home had chosen me.

Kristin Hohenadel is an American writer living in France.