Save the poor! No breaks for the rich! Has the Fed chairman become a tax-and-spend Democrat? 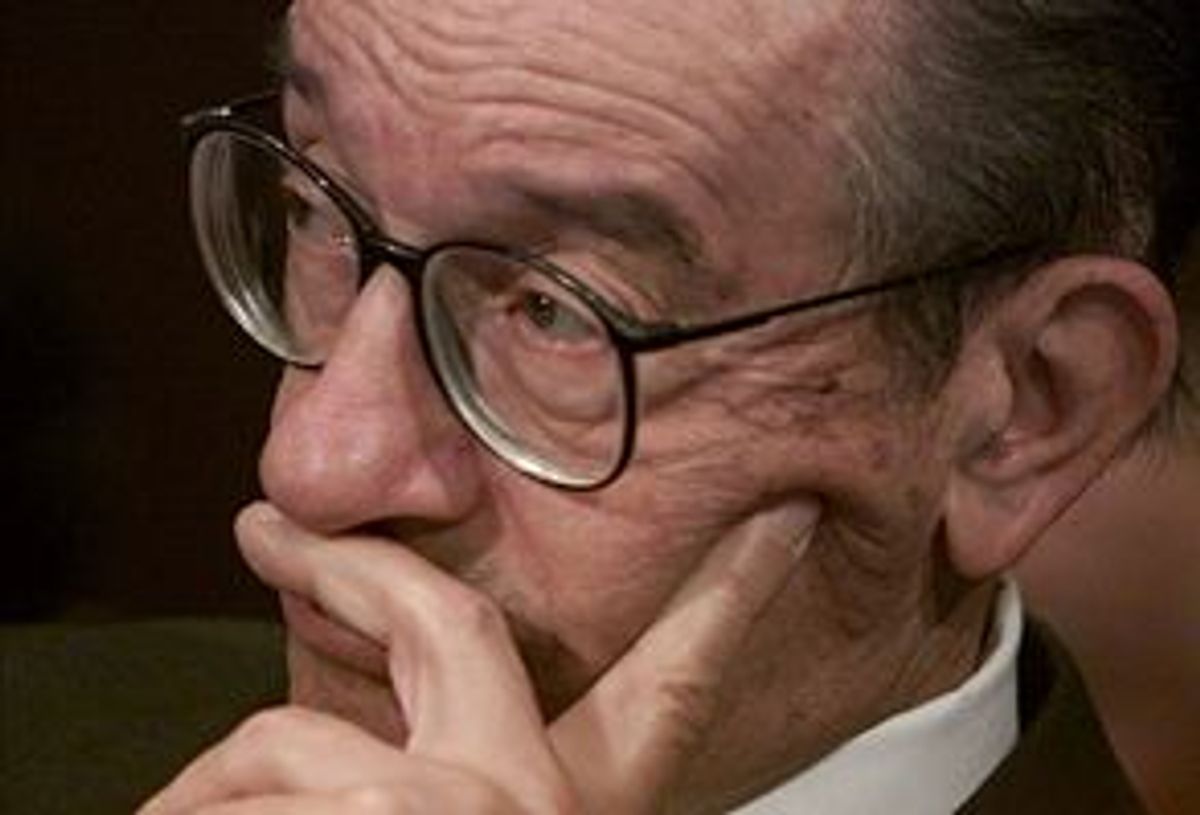 When Federal Reserve chairman Alan Greenspan testified before the Senate Finance Committee Tuesday he raised some seriously surprised eyebrows. First, he appeared with Robert Rubin, President Clinton's treasury secretary, and not with the current holder of that office, his close friend Paul O'Neill. Then, he agreed with Rubin and stated his opposition to the current Republican tax cut agenda.

Neither the capital gains tax cut favored by congressional Republicans, nor the reduction in corporate income taxes -- a proposal floated by the White House -- would do much to revive the economy, he said. If a fiscal stimulus should be pursued at all, he and Rubin concluded, it must be large -- up to around $100 billion, including what has already been authorized by Congress -- and it should be targeted as broadly as possible, not just at corporations and the wealthy.

Buddying up with a Democrat, spouting Keynesian fiscal policy -- has chairman Greenspan, the Ayn Rand acolyte and registered Republican, switched parties? Isn't this the same man who so strongly supported President Bush's massive tax cut? Is the supreme architect of so-called monetary policy fiscal management -- the belief that the best way to run the economy is by making discreet adjustments in interest rates -- veering to the left?

Not quite. Federal Reserve watchers stress that Alan Greenspan isn't really "cozying up" to Robert Rubin. While his actions could be considered "a bit of a snub" to Paul O'Neill, says Justin Martin, author of "Greenspan: The Man Behind the Money," in Tuesday's case Greenspan didn't personally choose to appear with Rubin. Senate Finance Committee chairman Max Baucus, D-Mont., asked both to testify. In the words of Robert Reich, former secretary of labor under President Clinton. "[Greenspan] happens to agree with Bob Rubin," Reich says. "And Bob Rubin, with him."

But Greenspan's decision to oppose both a capital gains tax cut and a corporate break slashes against the grain of recent economic history. The warm relationship between the Fed and Bush Republicans seems to have ended, or at least cooled. By rejecting the Republican agenda, say observers, Greenspan has reestablished his well-earned reputation for political independence -- a reputation that was tarnished in January when he boldly supported Bush's massive tax cut.

True, Greenspan has long favored monetary policy to combat recessions; cutting interest rates, he's argued, can help freeze or ignite the economy far faster than fiscal policies that move through Congress before reaching consumers. But his recent pronouncements suggest that he's been slowly changing his mind about whether there is also a role for more active fiscal policy -- for direct government intervention to goose the economy. His call for a broad-based stimulus confirms that Greenspan no longer favors only a monetary approach to business cycles, say Fed watchers.

"He's in favor of a double-barreled approach," says Martin. "He's saying that the country needs fiscal and monetary policy that are complementary, that are aimed at a stimulus for the economy. He's looking for the Bush administration to do something that doesn't just help out a few people."

Greenspan has always been something of a changeling. He started his career as acolyte and friend to the philosopher and novelist Ayn Rand, one of the 20th century's most ardent believers in the purity of free markets unobstructed by government. But he has also dabbled with a more Keynesian vision of the world. Working in government, first as an economic advisor to President Ford, he has in the past supported the famous British economist's argument that government should actively intervene in times of trouble to stimulate demand -- even if that meant running a deficit.

Then, in the '90s, Greenspan again shifted his stance. In a now-famous meeting with President Clinton and Robert Rubin just before the new president took office, he argued against deficit spending. The economy was in recession, but Greenspan didn't think that a federal spending spree would turn things around.

"The federal deficit was so high and cumulatively unstable, Greenspan said, that increased government spending to increase jobs -- in accordance with the traditional Keynesian model -- no longer worked," wrote Bob Woodward in "Maestro: Greenspan's Fed and the American Boom." There was only one way to improve the economy: "Reduce the deficit," Greenspan said. Forcing the government to stop borrowing money from its citizens would add disposable income to the market and give the Fed more power to affect the economy through changes in interest rates.

Clinton and Rubin went along, and Greenspan was proven right. Unemployment dropped, investment soared and the economy took off.

But if Greenspan feels that deficit spending is a bad idea, why did he reverse his stance and support Bush's tax cut, which ruined the possibility of paying down the debt by 2006?

Experts struggled to answer this question when Greenspan first publicly supported the cut. "It was a real surprise," says David Jones, a veteran Fed analyst at Aubrey Langston, a securities firm. "He's always been of a mind to favor monetary policy."

Many considered the move a political act. A few suggested that Greenspan traded his support for more control over appointees at the Fed, but most asserted that the once-independent chairman had lost his mettle. He was no longer the stiff-backed man who angered Bush Sr. by raising interest rates in 1988, only days before the Republican National Convention; or the man who infuriated President Clinton with another uptick in 1994, at a time when Clinton's advisors felt that the economy didn't need any help. Instead, he became in the words of Sen. Robert Byrd, D-W.V., "an anchor [that] seems to be wavering."

Paul Krugman, an economist and New York Times columnist, went even further. In a column published just after Greenspan's reversal, he upbraided the chairman for giving in to Bush's pressure, for supporting a policy that few economists favored. The headline: "Greenspan Shows His Cowardly Side."

Over time, however, Greenspan's position began to look philosophical. He favored the tax cut at least in part, experts say, because he feared that if the U.S. continued to run surpluses, the government would start investing in equities markets.

"This carried a risk of politicizing the private markets," writes Martin in "Greenspan." "Greenspan worried about how the public sector would decide whether to purchase a corporate note from Microsoft, or, say, Dell. If anything, Greenspan's tax turnabout was rooted in beliefs about the primacy of free markets that had been nurtured during his association with Ayn Rand."

His tax cut support also seemed to reveal a new interest in fiscal policy as a driver of business cycle change. If huge deficits could undermine the interest rate cuts, and if surpluses could politicize markets, then fiscal policy must have a power that even the independent Fed must consider. Fed watchers didn't have much proof to go on -- a few cryptic comments about fiscal policy, and bits of information gathered from sources inside the Fed -- but they figured that Greenspan's economic position had started to change once again.

The chairman's recent statement in Congress only confirm this belief, Jones says.

"I think Greenspan has come around to the view that this crisis is so severe now that we're in a recession, that he would tend to say we should pull out all the stops," Jones says. "In this special case situation, he seems to believe that a tax cut can't hurt if it works as a complement to monetary policy."

But he doesn't favor a capital gains cut or a corporate tax cut because he doesn't think that the cost to government, in the form of lost tax revenues, offsets the benefits.

"A cut in the capital gains tax, whatever its merits or demerits, is not designed to give a quick financial stimulus," says Gus Faucher, a senior economist at Economy.com who spent six years working as an economist in the Treasury Department. "And Greenspan knows it."

"Greenspan clearly understands that monetary policy has its limits and now he's finally to the point where he's communicating that," says Ken Thomas, a lecturer in finance at Wharton. "As far as bang for the buck, a fiscal stimulus -- combined with the eight interest rate cuts already in place -- will be what it takes to put us in a better position."

President Bush and the congressional Republicans may not enjoy running up against Greenspan's revived sense of independence, but for now, it seems here to stay.

"The chairman has strong opinions," Faucher says. "He looks at each set of circumstances individually and this is a situation that is new. It requires direct action and that's what he seems to be favoring."