My evening in a roomful of impassioned Muslim men was full of surprises. They looked me directly in the eye, though I am a woman. And they spoke of America as their hell, but also their heaven. 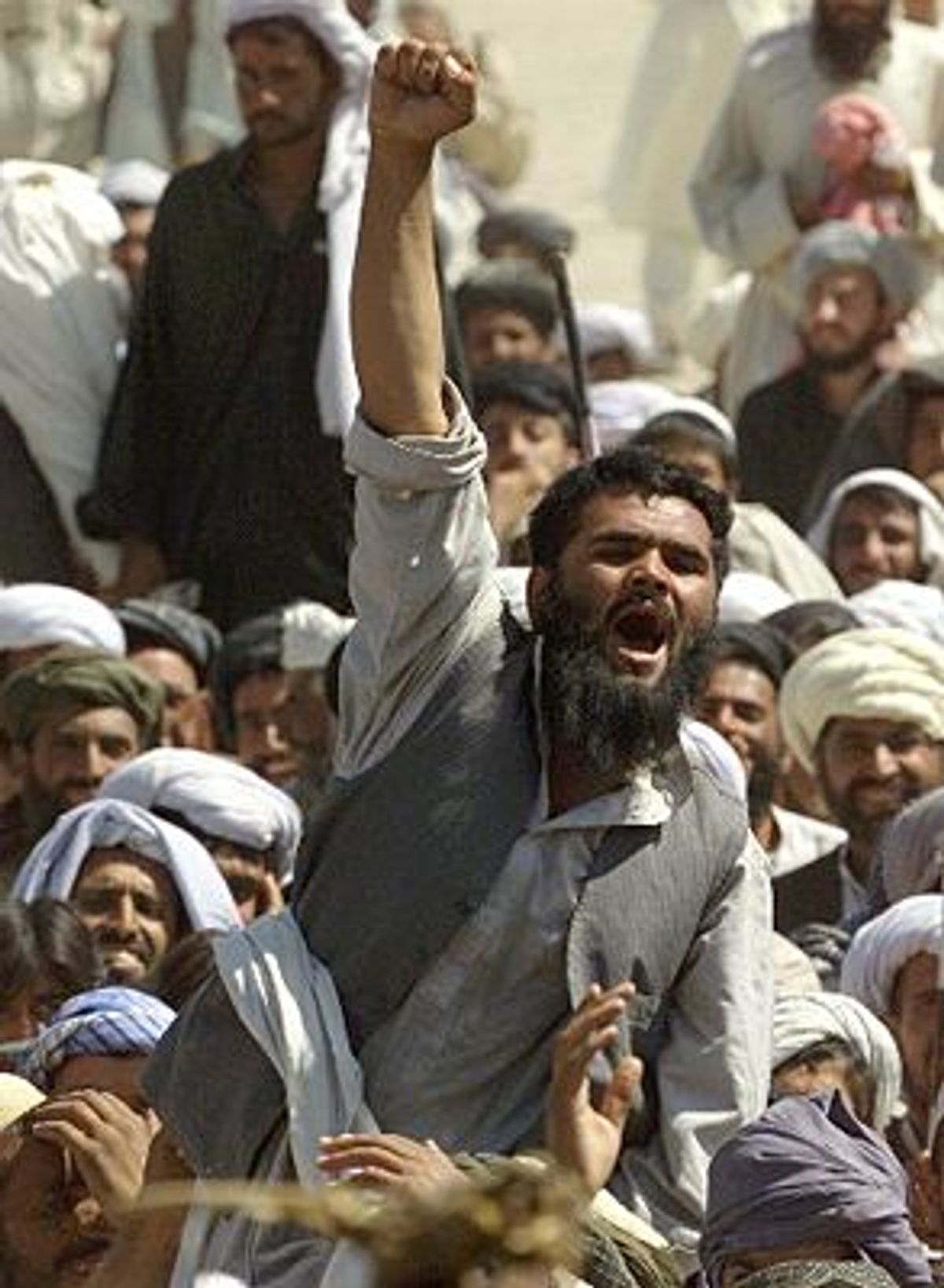 The men gathered in the living room of a man whose family lived by my father's childhood home in the neighborhood of Nampalli, near Abid Road, in the city of Hyderabad, India. Abdul Kareem Abid is now senior editor at Daily Insaaf, which means "justice." It is an Urdu newspaper that supports the party platform of Jamaat-i-Islami, the conservative religious party that has driven thousands of protesters onto the streets to protest Pakistani President General Musharraf's political friendship with America.

The newspapers here are calling President Bush by the moniker "Sheriff Bush."

Abid's newspaper is writing about the "Bush mafia," Bush administration officials like Vice President Cheney, whom they consider war hawks.

"They need an enemy," he says.

I am the only woman in the small room, feeling increasingly odd as more and more men filter inside from the street. On the adjacent wall hangs a wall-size photo of millions of Muslims packed around the Kaa'ba sharif in Mecca for the holy pilgrimage Haaj. Outside, the muzzein had called the azan for magrib namaz, the prayer when the sun sets, but the men remain seated.

Yes, these men are conservative Muslims, but not of the strain of Islam practiced by the Taliban, who some here support, while others do not.

On my way to meet with the men, I pass the Bell & Tell Burger Corner, which offers "separate seating for ladies & families," a timely reminder of how strongly many here feel about the appropriate separation of men and women, unless they are married. But something happens when I arrive at the house that surprises me: The men listen to me. They allow my challenges. They smile at me. They give me Coke in a glass.

A lawyer and economic thinker with a head of white hair talks to me about Israel, the Palestinians, U.S. foreign policy. His points go through me like the repeated mantra expressed by so many Muslims. And then he tells me how U.S. foreign policy hit home with him. When the U.S. bombed Iraq, killing thousands of civilians without any outrage from the world, he was about to host his son's lavish wedding dinner to a lieutenant general's daughter. His son was eager to throw the dinner. Maybe the prime minister would show up. Maybe other generals.

It didn't matter. This man was so depressed by the killings of so many Muslims, he canceled the fete and had his son married in a simple nikkah ceremony.

He has the sort of anonymous Muslim name, Mahmood Mirza, that is a blur of nothing to those of us in the West. He will always be known to me as the man who canceled his son's wedding dawat, because of the death of Muslims thousands of miles away in a country whose policies he didn't even support.

He pushes his glasses up on the bridge of his nose. "Every Muslim may be liberal, but in his heart he has feeling for the suffering of Muslims. There, his intellect disappears. It's deep in his emotions." It is not much unlike, these men say, the sadness of Christians for the murders of Christians in Indonesia.

He sent a letter to the Washington Post, which he doesn't think has been published yet. He recites it now. "A world can afford injustice and discrimination. A global village will not."

"Va! Va!" the editor exclaims, the two of them shaking hands.

Beside him sat a man in a salwar kameez from the Jamaat-i-Islami party. I'll be honest. I thought he'd be an orthodox nut. I thought he wouldn't make eye contact with me, because men and women aren't supposed to look each other in the eye in conservative Islam, lest lust arise. But he did look me in the eye, and he called me "bah-hayn jee," dear sister. And he was far from a nut. He was a father. He told me about the night his 23-year-old son took his mother into a room in their house in Mansoorah outside Lahore, locked the door and told her that he had been training in Afghanistan to fight the Indian Army in India-held Kashmir, as it is called here. She wept.

"Son," she told him, "I have known you have been going to Afghanistan. I have not worried because so many come and go on that path. But this road upon which you are now going, no one returns."

Her son explained to his mother, the man recounted, "Mother, I have read of the rape of Muslim women in Kashmir by Indian Army men. I must stop them before they come here to my house and rape my mother and sisters."

She kissed him upon the neck and blessed his departure. They emerged from the room, the decision sealed and joyful. And when news of his death came not long after, neighbors visited to say "mubarak," congratulations, for having a son that was a martyr.

He, too, has that generic Muslim name to the West, Safdhar Ali Choudry. To me, he shall always be the father who smiles with pride while talking about his own son's death.

His political party is writing anti-American slogans in English so they can be read by the West on CNN broadcasts (and by Pakistan's ruling military generals, he says). But it is not because they hate America, he says. It is a political campaign to keep American soldiers off Pakistani land, which they believe has succeeded for the moment. (That has been supported by Musharraf in interviews he has given.)

He laughs. "Amrika tho Pakistanis kuh jannath hay." America is heaven to Pakistanis. He translates for himself, making the ironic, but true, point: "The most hated country of world is our heaven." That is proven by the countless number of boys, students, who ask me when I think it will be easy to apply again for student visas to Amrika.

My friend Anaya in Chicago wrote after my first dispatch to ask if the country is going to erupt into a civil war. Well, Anaya, Jamaat-i-Islami only grabbed 15 percent of the vote in the last election. And many people here discount the blustering cries of their clerics, the mowlwis.

As she wipes the tiled floor with a rag, the nokrahni at the house of my dadi, my father's mother, Medina Khatoon, asks: How are the people of Pakistan going to fight when people can barely afford to eat? Her family of 13 people earns about as much as the 9,000 rupees, about $143, they spend on rent, food and school fees every month. "If there are vegetables then we eat them. If there isn't, then that's OK."

But to the men around the coffee table, they were prepared to protest in the streets against Musharaff, if U.S. troops were allowed in to fight against Afghanistan, their Muslim brothers. But for now, they were all quite sure such a thing would never happen.