Biological weapons are not that hard to produce, says a chilling new book written before Sept. 11 -- and they're getting easier all the time. 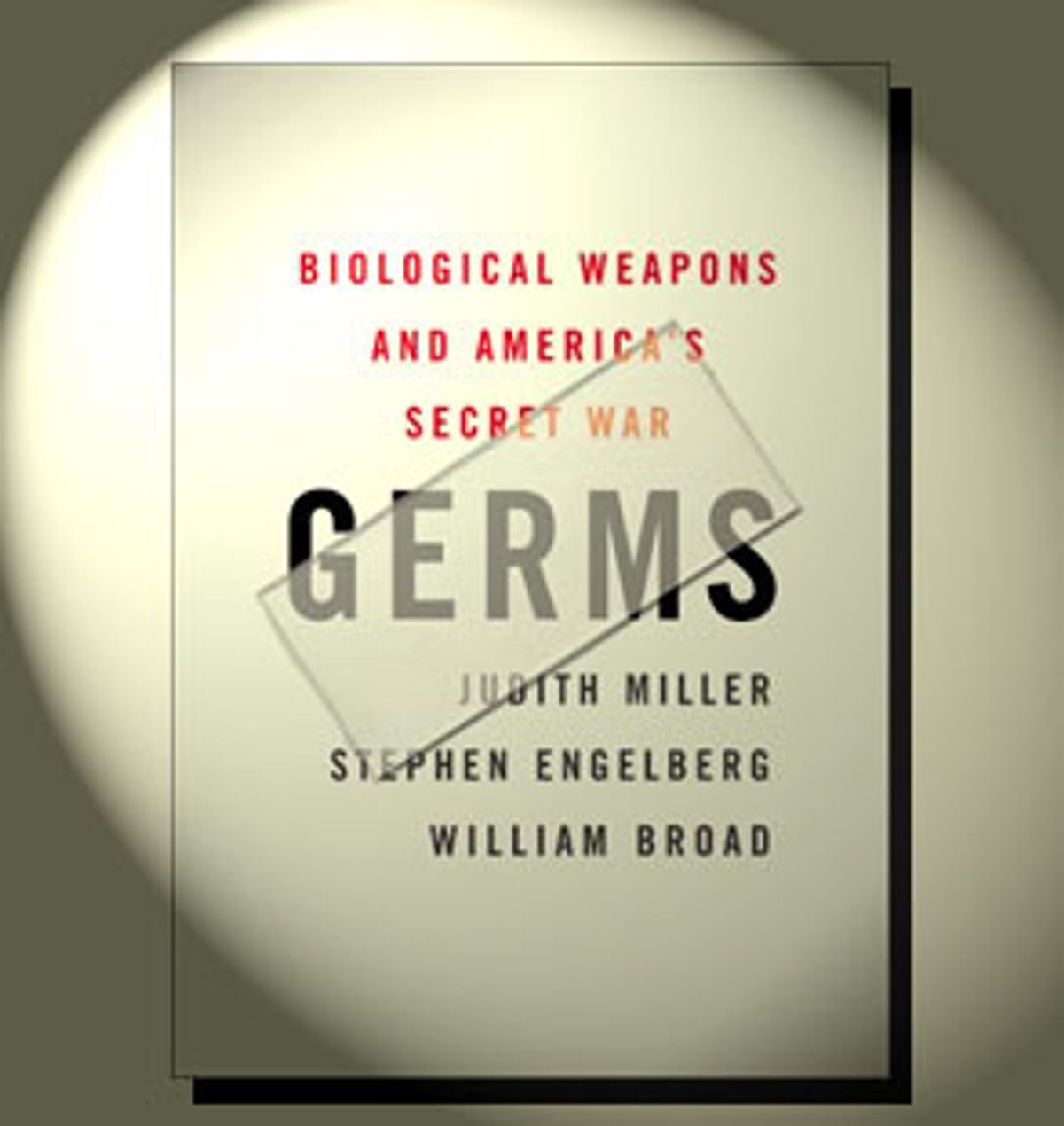 As Americans struggled to find their psychological footing in the aftermath of the terrorist attacks, no single news report was more chilling than the revelation that the hijackers had at one point expressed interest in crop dusters. The implications needed little elaboration. What could be more horrifying than the specter of small planes equipped for spraying pesticides raining down upon an unsuspecting populace a hellish payload of biological poison: anthrax, Ebola, smallpox or some new recombinant DNA atrocity cooked up by rogue scientists from the former Soviet Union?

Authorities were quick to pooh-pooh the possibility that the terrorists had actually planned to use crop dusters for acts of biological warfare. It was more likely, they said, that the men planned to use the small planes in the same way that they later used passenger jets -- as kamikaze-guided bombs. Not only were the pesticide sprayers ill-equipped for delivering germs, they pointed out, but the manufacturing of so-called "weaponized" anthrax or smallpox is exceedingly difficult.

But just how true is the latter point? A close reading of the recently published "Germs: Biological Weapons and America's Secret War" reveals a certain schizophrenia on the topic. Written by three New York Times reporters, Judith Miller, Stephen Engelberg and William Broad, who have been reprising their findings in the pages of the daily Times ever since the attacks, "Germs" summarizes its contradictory conclusions succinctly at the very end: "Is the threat of germ weapons real or exaggerated? Our answer is both."

So on the one hand, "Germs" tells us how in the summer of 2000, a Defense Department team "armed with $1.6 million in funding and commercial catalogues of lab equipment" was able to "easily assemble an anthrax factory from off-the-shelf materials. The results suggested that with precious little money and off-the-shelf equipment, a state, or even a group of terrorists could build and operate a small-scale germ weapons plant, probably without the intelligence agencies' knowledge."

Readers are also treated to a detailed account of how followers of the Bhagwan Shree Rajneesh successfully poisoned thousands of people with salmonella in 1984 in rural Oregon. Chapters devoted to the operations of a vast (and secret) Soviet industrial infrastructure devoted to germ warfare, along with the clearly documented attempts by Iraq to manufacture anthrax and other poisons are equally distressing. Both countries, we are told repeatedly, manufactured enough germs and toxins to "kill every human being on the planet." (As did the United States.)

But at the same time, the authors note that even the well-funded Aum Shinrikyo cult, which killed 17 people in Japan with sarin gas in 1995, failed repeatedly in its attempts to commit acts of bioterrorism. (Sarin is a chemical, not a biological agent. Chemical weapons are easier to utilize, but also easier to defend against and generally less deadly.) And they concede that "Terrorists have blown up buildings, hijacked scores of airplanes, and murdered indiscriminately in the past three decades. Only a handful of groups have attempted biological attacks and fewer still have succeeded."

Further muddying the waters, on Sept. 24, a New York Times editorial, clearly written with the input of the three reporters who authored "Germs," declared: "Despite loose talk that a college chemistry major could whip up a lethal weapon in his garage, the historical record suggests that it is nowhere near that easy. Selecting and growing a potent biological agent, maintaining its virulence, making the germs hardy enough and stable enough for widespread dissemination and finding an efficient means of spreading them around all pose obstacles that have frustrated even well-financed state weapons programs." The editorial was distinctly more reassuring than the book.

So which is it? Should we be living in dread, or can we collapse back into complacency?

The answer, unfortunately, is far closer to the former than the latter. "Germs" is a sober, informative, detailed account of the history of germ warfare and its present state-of-the-art capabilities. It has two messages, both of them clear and unequivocal: First, a skilled scientist with enough money can make biological weapons; second, the public health infrastructure in the United States is woefully unprepared for manmade epidemics. And the fact that it was written well before the terror attacks makes these ominous findings impossible to ignore.

We'd like to believe that certain acts are so intrinsically evil that they simply could not be carried out. But after Sept. 11, those beliefs have been blown to smithereens. Over the smoking ruins of lower Manhattan, it is no longer possible to assume that just because successful acts of bio-warfare haven't occurred in modern times they won't happen in the future. The historical record may show that bio-warfare is hard. But it's also getting easier all the time.

Mass murder via poison has a long history. As the authors note, "Germs and warfare are old allies. More than two millennia ago, Scythian archers dipped arrowheads in manure and rotting corpses to increase the deadliness of their weapons. Tatars in the fourteenth century hurled dead bodies foul with plague over the walls of enemy cities. British soldiers during the French and Indian War gave unfriendly tribes blankets sown with smallpox. The Germans in World War I spread glanders, a disease of horses, among the mounts of rival cavalries. The Japanese in World War II dropped fleas infected with plague on Chinese cities, killing hundreds and perhaps thousands of people."

The new generation of biological weapons are far more deadly. In addition to botulinum, Marburg, salmonella, Ebola, smallpox, anthrax and others, the authors describe science-fictiony horrors cooked up by the Soviets, such as recombinant DNA gene splicing that created super-virulent strains of anthrax and smallpox.

Producing sophisticated biological weapons like the latter requires a substantial commitment in funding and legions of highly skilled scientists. But not all germ weapons are so hard to make -- and advances in biological science consistently put more power into wider hands at less and less cost.

One of the most chilling developments, in terms of biological warfare, was the breakup of the Soviet Union. The Soviets invested heavily in the "Biopreparat" -- an overarching institution overseeing germ warfare research that at one time employed more than 30,000 scientists and technicians. The collapse of the USSR left thousands of biologists without unemployment -- but with the skills to conduct germ warfare.

By far the most compelling scene in "Germs" is the description of the decaying Stepnogorsk germ factory in Kazakhstan. Once the premier jewel in the Biopreparat crown, Stepnogorsk boasted a 50-foot-high aerosol test chamber in which the Soviets experimented with their strains of anthrax and Ebola. There were 10 20-ton, four-story-high fermentation vats each capable of brewing 300 tons of anthrax spores in less than a year, and countless underground bunkers "where the finished product" was stored.

But by 1995, "Weeds sprouted from the cracked sidewalks that linked the complex's twenty-five main buildings; there were more potholes than roads. The wire security fences surrounding the compound were torn and no longer electrified. The motion sensors outside the complex were gone. Winter winds that rip across the Central Asian steppe had blown out windows in most of the main buildings. Rain, snow, and ice storms had eroded the gray concrete walls. Air locks that had once kept deadly microbes from escaping now hung open. The plasticized lab floors were torn and buckled from neglect and the weather. Many buildings appeared to be abandoned."

And the scientists who once worked there? They were struggling to survive, while being courted by Iran and Iraq and who knows who else.

The scenario of underemployed Russian biologists selling their smallpox gene-splicing know-how to Baghdad or Tehran or Kabul might, in a more innocent age, seem like a plot for a second-rate James Bond movie. So too, does the Soviet research into psychotropic and neurotropic germ agents that would alter moods and sleep patterns and cause other psychological and physiological changes.

But after Sept. 11, what might once have seemed alarmist suddenly appears to be common sense. A pre-terrorist attack reader could be excused for finding the following reference to bin Laden overly speculative: "Osama bin Laden, the renegade Saudi sponsor of anti-American terrorism, had tried hard to acquire chemical weapons and 'may have' tried to get germ weapons as well."

But post-terror, one reads that line and nods one's head. If not Osama bin Laden, then someone, somewhere, sometime.

That an event of bioterrorist horror will happen seems inevitable. The question then becomes how to defend against it. Aside from physically eradicating all potential terrorists from the world, a prospect that seems unlikely despite Bush administration proposals to the contrary, the main thrust of "Germs" is that the best thing we can do is invest in public health. In the authors' view, harm reduction is the key: We must invest in systems that can quickly detect outbreaks when they occur, contain them effectively, and treat the victims expeditiously.

As the authors observe, over the last 50 years, as the threat of bio-warfare has risen, the state of the public health infrastructure in the United States has declined. A relatively mild outbreak of West Nile virus in New York strained that city's infrastructure to an enormous degree. There are not enough hospital beds to handle the victims of a serious epidemic, there is no overarching authority entrusted with coordinating responses to such outbreaks, and the number of trained personnel in place to respond to such emergencies is pitiful.

Any war on terrorism, the reader can only conclude after digesting "Germs," must include a sustained and expensive campaign to bolster public health. Otherwise the casualties, as Mayor Giuliani noted on Sept. 11, will truly "be more than we can bear."