The return of Colin Powell?

Ridiculed as the Bush administration's "odd man out" on the eve of the terror attacks, he has neutralized the hawks -- for now. 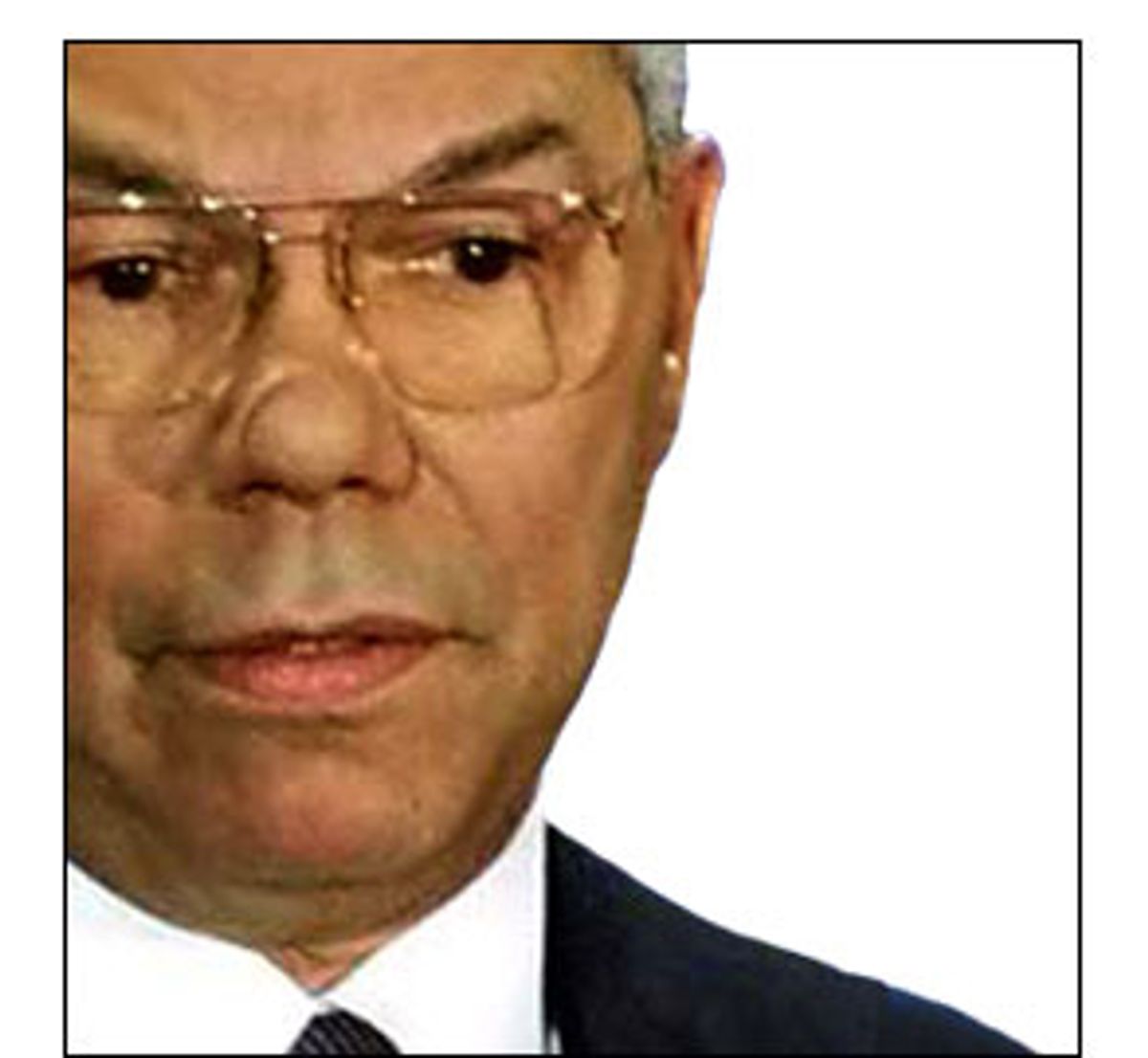 As the United States struggles to respond effectively to the Sept. 11 terror attacks, the Bush administration official widely reported to be missing in action this year -- Secretary of State Colin Powell -- has so far turned out to be its strongest voice.

Powell was ridiculed as the missing man by Time magazine in its Sept. 10 issue -- the day before the terrorist attacks that killed as many as 7,000 and transformed international affairs. "Where have you gone Colin Powell?" read the taunt on the cover. The article called Powell the "odd man out," and said that a slew of conservatives -- from Richard Perle to Paul Wolfowitz in the Defense Department, to John Bolton at State -- had neutralized the liberal, diplomacy-oriented secretary of state.

It's tempting to ask where those hawkish voices have gone, now that Powell has become the reassuring, firm voice of reason to a frightened, angry nation.

But Powell's apparent ascendancy shouldn't be overstated. Just as rumors of his diminished role before Sept. 11 were somewhat exaggerated, the extent to which he's won the internal war over how the U.S. responds to Osama bin Laden may also turn out to be temporary. As Defense Secretary Donald Rumsfeld left Wednesday for a diplomatic tour of Saudi Arabia, Oman, Egypt and Uzbekistan -- nations vital for deployment of U.S. forces against Afghanistan's terrorist camps directed by bin Laden -- it was hard to know whether Rumsfeld's departure meant that Powell is too important to U.S. planning to leave Washington, or that the hawkish defense secretary is firmly in charge of an impending military offensive.

Still, it's clear that for the last three weeks, Powell has carried the day. Although he was quick to call the attacks "war," he also warned the American public almost immediately that what was needed was not a series of explosive military attacks on Afghanistan or other nations suspected of harboring bin Laden, but a broad military and diplomatic coalition that would isolate those who supported terrorists.

In those same early days after the attacks, Rumsfeld and his hard-line deputy Paul Wolfowitz argued for a more forceful approach -- including swift military action against Afghanistan and even Iraq as sponsors of terrorism.

And on Sept. 16, Rumsfeld himself said in a television interview, "The reality is that a terrorist can attack at any time in any place using any technique, and it is physically impossible for a free people to try to defend in every place at every time against every technique. Now, what does that mean? It means that the president is exactly right, that we have to take this battle, this war to the terrorists, where they are. And the best defense is an effective offense, in this case. And that means they have to be rooted out."

Other hawkish Rumsfeld allies denigrated Powell's diplomatic approach. "It's wonderful to have the support of our friends and allies but our foremost consideration has to be to protect this country and not take a vote among others as to how we should do it," ultra-hawk Richard Perle, who directs the Pentagon's Defense Policy Board, said in the days after the attack. But Powell held firm. "The kinds of things that will probably be most successful in the campaign against terrorism are intelligence-sharing, controlling people going across our borders, financial transactions," he told NPR Sept. 27. "You can't do this, America alone. You need coalitions."

Now Rumsfeld and Wolfowitz seem to be reading from the same script. Leaving a NATO meeting Sept. 28, Wolfowitz sounded much less aggressive than he had at first. The NATO allies "appreciated that we don't believe there's a single magic bullet, that we don't believe it's primarily military, and that their support is very important for maintaining the long-term resolve and patience that's required here," he said.

And on Wednesday Rumsfeld told reporters the war against bin Laden was more likely to rely on intelligence than military might. "It's not going to be a cruise missile or a bomber that's going to be the determining factor," he said. "It's going to be a scrap of information from some person in some country that's been repressed by a dictatorial regime ... that's going to enable us to pull this network up by its roots and end it."

But it was Rumsfeld, and not Powell, who left Wednesday for a tour of Saudi Arabia, Oman, Egypt and Uzbekistan. U.S. forces are already based in Saudi Arabia and British newspapers have reported the arrival of American spy planes in Oman at a British air base. Uzbekistan has agreed to allow U.S. forces to use former Soviet bases there which were once used in the failed occupation of neighboring Afghanistan from 1980 to 1990.

Bush said Rumsfeld was "the appropriate person to send" for consultations, but the decision to deploy the defense secretary, not the secretary of state, could be read two ways. It may be that Rumsfeld still holds vital sway over America's foreign policy and is setting up the allies and forces needed to smash bin Laden and the Afghan Taliban regime, which continues to harbor him. Or it could be that Rumsfeld is doing the field work while Powell remains at the helm of policy in Washington, receiving leaders from India and Greece Tuesday, Qatar and Portugal Wednesday and from other nations as coalition remains the weapon of choice in the U.S. response to the terrorist attacks.

A senior administration official glossed over any differences between the hawks and Powell. "This administration shows it knows how to work together and to decide the right policy," he said, because "the president says 'do it' and they do it."

Speaking on condition of anonymity, the official added: "I was not happy to see journalists write that Powell is being undercut by hawks in the administration and I'm not happy to see you now write that Powell is winning out over the hawks. The task is not just to blow up some rocks in Afghanistan. If you are to pull up the roots of terrorist networks you don't just pull them up militarily. You've got to get countries to shut down financing, bank accounts. You can't do it with guns."

But it wasn't long ago that the administration seemed ready to rely more heavily on guns in its response to the Sept. 11 attack. It was Powell who quickly went to work on a diplomatic response, building a worldwide coalition aimed at cutting off financial, logistic and communications links that enable terrorists to recruit, train, equip and dispatch thousands of terrorists against American and other targets.

Starting with NATO and then Pakistan -- the only country still recognizing the Afghan Taliban regime that is sheltering bin Laden -- Powell won the backing of key countries willing to host U.S. forces and join an anti-terrorism coalition.

And his success does seem to have him riding higher in Washington. Rumors of his struggles within the administration, in its early months, were not entirely exaggerated. Earlier this year he was humiliated when just one day after he said the United States would continue talks with North Korea initiated by the Clinton administration, he had to reverse course when Bush gave in to hawks and ordered a cutoff of all talks pending a review. (Later the talks were approved, but the peace process has been seriously set back.) Powell also faced criticism over being soft on China back in April, when a U.S. surveillance plane was downed there, although the State Department was ultimately successful in getting the crew returned safely.

He also lost his battle to allow Iraq greater access to civilian goods while tightening sanctions on access to weapons -- a move hotly opposed by hawks on Capitol Hill and eventually scotched by Russia and China in the United Nations. And the secretary of state was overruled when he tried to soft-pedal missile defense plans in Europe -- Defense Department officials simply told the allies they had no choice but to accept the American plan.

Certainly Powell continues to have his hawkish critics, who still don't forgive him for his restraint during the Gulf War, when, their line goes, the U.S. had an opportunity to go after Saddam Hussein but did not, largely due to Powell's caution. The so-called Powell Doctrine on when to use military force -- as a last resort, and only when U.S. or allies' vital interests are at stake, after clear military and political objectives have been defined, and the mission has the support of the American people and Congress -- has come in for new attack in the last three weeks.

"Ten Years On, Powell Gets it Wrong Again," was a headline for an op-ed by Mark Steyn in the London Sunday Telegraph Sept. 30 that typified this line. "Ten years ago Powell was the only guy in the inner circle who didn't want to fight the Gulf War," wrote Steyn.

Conservative William Kristol, former advisor to Vice President Dan Quayle and now editor of the Weekly Standard, complained in the Washington Post Sept. 25 that all major political figures supported President Bush in his response to the terror attacks, "except for his secretary of state. Colin Powell revised or modified many of his boss's remarks."

After Bush told the armed forces and the American people to "be ready" for war, Mr. Powell said "let's not assume there will be a large scale war," Kristol wrote. Powell also went too far, according to Kristol, when he said the overthrow of the Taliban was not a U.S. goal.

"Eleven years ago then-President bush overrode Powell's resistance to fighting Saddam. Bush was vindicated in doing so. Will the current President Bush follow Powell's lead? Or will Bush lead and demand that Powell follow?" Kristol wrote.

But Rumsfeld and Powell have been careful not to contradict each other in public. And in fact their approaches may not be contradictory in private, at this point. Although apparently Powell's arguments for restraint have been heard by Bush, it's also true that the nature of the U.S. enemy -- hidden in caves in a remote and hostile land -- is forcing both the hawks and the diplomats to reach some common conclusions.

Above all, the religious justifications for the attacks used by bin Laden and Islamic extremists threaten to turn any U.S. response into a conflict between the West and Islam. The entire Bush administration -- already well versed on the delicacy of winning hearts and minds in the Muslim world, thanks to the Gulf War -- fairly well understands the need not to fall into a trap set by bin Laden.

Powell's approach has been to shore up commitments by Muslim countries and to allow each of them to contribute whatever they can to the effort without setting off domestic instability. The key to winning the war on terrorism may lie in supporting moderate elements inside a slew of countries from Pakistan to Egypt. Powell's work in that direction has become the national agenda, even as Rumsfeld dispatches thousands of troops, planes and ships to prepare to strike once the diplomatic work is complete.

And there may well still be differences between them. Rumsfeld has warned that the U.S. response would not be toned down to accommodate any fainthearted members of a coalition. "In this war, the mission will define the coalition -- not the other way around," he warned in a briefing last week.