Director Antoine Fuqua finds the monster in Denzel Washington -- and in the process makes one of the finest cops-and-robbers thrillers of recent years. 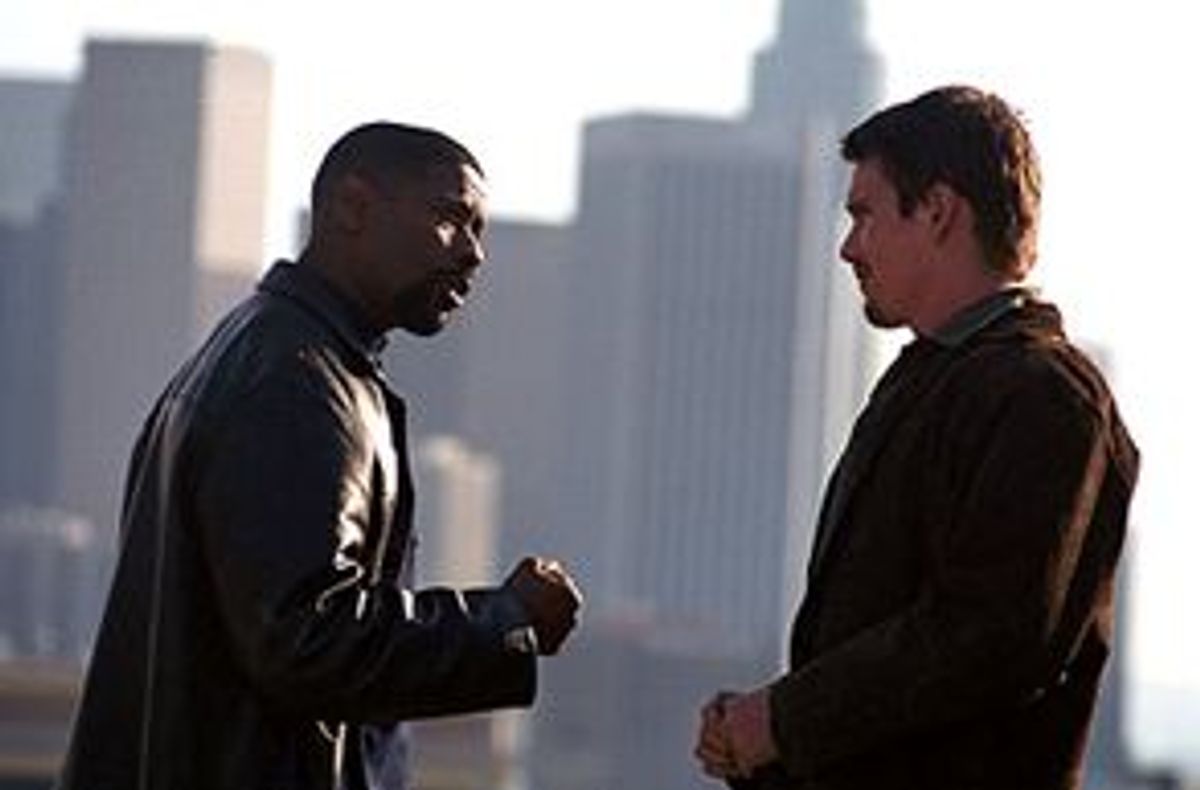 Why has it taken so long for someone to see the monster in Denzel Washington? I mean, admittedly I wouldn't have thought of it myself. But when you look back over his career, the dark side has always been there. His Rubin Carter in "The Hurricane" (otherwise an unwatchably bad film) was a troubled and self-destructive character, even if the injustice done to him is not in any measurable way his fault. His sadistic football coach in "Remember the Titans" (not an unwatchable film but a reprehensible one) enforces racial equality through totalitarian discipline.

Now we can see that those characters were just paving stones on the road to Alonzo Harris, the suave and knowing Los Angeles narcotics detective who resembles John Shaft, Othello and Satan all rolled into one. It finally occurred to me, a couple of years late, that Washington would have been a better choice than Samuel L. Jackson for John Singleton's misbegotten "Shaft" remake. Jackson was enjoyable, as always (with the possible exception of "The Red Violin") but he played the role as if he were kidding. Washington is never kidding. He certainly isn't kidding here, when the bloodied Harris stands in the middle of a gang-banger cul-de-sac near the end of "Training Day" and roars, in Washington's unmistakable breath-based preacher rhythms: "King Kong! Ain't got nothin'! On me!"

Like all great movie monsters, from Kong to Godzilla to Edward G. Robinson in "Little Caesar" and Al Pacino in "Scarface," Harris is bigger than life, a morally ambiguous titan, a source of both wisdom and terror. I don't feel 100 percent sure, even days after seeing the film, that his view of the world -- which is essentially that his variety of evil is necessary to protect dewy-eyed civilians like you and me from worse varieties -- isn't correct. But I damn sure wouldn't turn my back on him.

Harris is breaking in an earnest white officer named Jake Hoyt (Ethan Hawke), who is new to the narcotics squad, and at first he seems devilish with a lower-case D. He calls the Hoyt household early in the morning and says something that makes Hoyt's young and pretty wife Lisa (Charlotte Ayanna) laugh. We don't hear it, which might be the first indication that director Antoine Fuqua is after something trickier here than the standard-issue actioners he's made before ("Bait," "The Replacement Killers").

Meeting Hoyt in a diner, Harris seems to be a familiar variety black hipster cop, all gamesmanship and repartee, clad in sharp threads and faux-Muslim headgear. Hoyt struggles to amuse him with a complicated tale about an arrest he and a female partner once made while working in the San Fernando Valley. Harris stops him. "That's great," he says, flashing that dazzling Denzel smile. "That's great. You're telling me you could be out there with a fine bitch as a partner for a year. And the most entertaining story you got for me is a drunk stop?"

Despite the troubling banter -- "I remember what it was like to have a pretty young bride," he coos reassuringly at Hoyt; "you probably fuck her face to face" -- we feel immediately at home with Harris, just as Hoyt does. In fact, that's precisely the bamboozle that Fuqua's slippery, grueling and enthralling movie (from a fine script by David Ayer, also the author of "The Fast and the Furious") plays on us from the start: We think we know this guy, and we don't. We desperately want him to like us, and he doesn't. (By "us" I mean moviegoers in general, by the way, although it's possible that white viewers like me are especially susceptible.)

One could argue that Harris is a subversive inversion of an African-American male character perfected by Hollywood in recent years: the upright authority figure who serves as moral mentor or spiritual guide to a younger and more vulnerable white character. Think Morgan Freeman in "Seven" or Laurence Fishburne in "The Matrix." This kinder, gentler form of racial stereotype is defined almost entirely by his wisdom and rectitude. So what happens when his jive, his charisma and his excellent marijuana don't lead to wisdom and rectitude, or at least not to versions of those things that accord with our liberal sensibilities?

None of this is present on the surface of "Training Day," mind you. What we get instead is a brilliant portrait of a guy who flows down L.A.'s meanest streets oozing with confidence. Harris is a Zen master of copness. He's positively delighted to be a cop, and especially the kind of cop who is always flirting with complete corruption, who spends his days fucking with as many people's heads as possible. Within a couple of hours of their breakfast (which Hoyt pays for, although he didn't order anything), Harris has induced Hoyt to smoke PCP-laced dope and drink both liquor and beer while on duty. (A good narcotics officer, he argues, must know his shit.)

Harris stands by and watches Hoyt gets his butt kicked trying to rescue a teenage girl from a couple of crackhead rapists. "You should have just shot them," he suggests once the melee is over. But Harris is not some strung-out loser without a moral compass, à la Harvey Keitel in "Bad Lieutenant." He sees himself as a Machiavellian prince of the city, serving the cause of greater justice; his impressive arrest record and his decorations speak for themselves, and if the weak are sometimes sacrificed to the strong in the process, that's the way of the world. Dazzled by that wonderful smile and the street-level realpolitik (and maybe by the drugs and booze as well), Hoyt swears loyalty to his new boss. Harris gives him the smile again, with its almost hidden touch of scorn: "My nigga!"

Harris takes his valley-boy "nigga" down a rabbit hole just as disconcerting as the one Fishburne takes Keanu Reeves down in "The Matrix," and the world they find there is equally murky. Harris terrorizes a wheelchair-bound street dealer (Snoop Dogg), provokes a shootout with gang members after using a phony warrant to seize a drug lord's stash of cash, and stages an elaborate sting against an aging surfer type (Scott Glenn) who's one of his oldest friends. Hawke has been stigmatized as representing a certain New Hollywood type -- that is, young, sincere and not awfully bright -- but he's perfectly cast as Hoyt, a man of principle who takes a long time to grasp that his faith in Harris may be misplaced.

Then again, it may not be. "Training Day" isn't just one of the finest cops-and-robbers thrillers of recent years, full of devious twists and gut-grinding tension, but it also steers clear of convenient moral formulas. Harris unquestionably uses Hoyt as a pawn in his elaborate scheme, but he also seems to have a certain affection for the rookie; on balance, he hopes Hoyt plays by his rules and emerges from the urban jungle in one piece. In this universe of apparent anarchy, it becomes clear that even the Bloods of South Central and the Latino gangsters of East L.A. live by their own codes of honor.

In fact, although "Training Day" is a movie of prodigious violence that your grandmother should probably avoid, it's a long way from empty nihilism or sadism. Ayer is above all a writer of melodrama, which means that the good and bad deeds Hoyt and Harris perform will provoke, in the end, an appropriate reaction from the universe. Fuqua's gripping and tightly focused portrait of this urban underworld -- reminiscent, more than anything else, of the early films in the "Dirty Harry" series -- should establish him as one of Hollywood's hottest directors. If there were any justice in the real world, as opposed to the world of melodrama, Washington's masterful performance, with all its passion, wit and grand human irony, would win him another Oscar. But there isn't, so it won't.