We wuz robbed! Barry Levinson, Bruce Willis and Billy Bob Thornton mix it up in a misfire of a heist film. 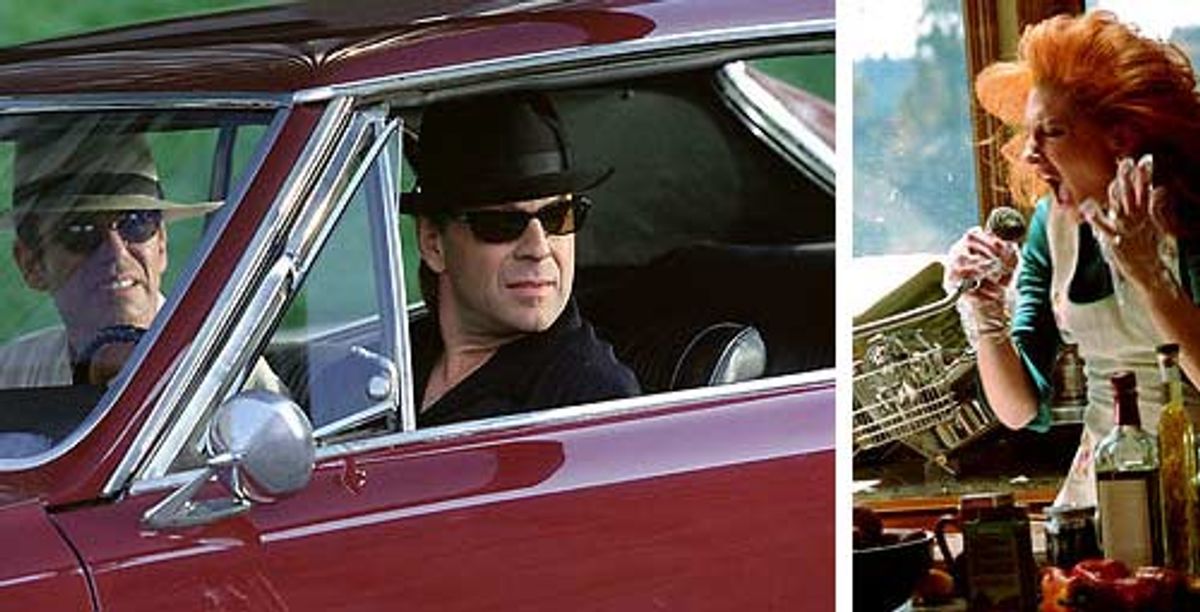 It's a tossup as to who's more inept: the bank-robber heroes of "Bandits" or the filmmakers. "Bandits," in which not a single scene works the way it's supposed to. There's talent behind the camera: Barry Levinson ("Diner," "Wag the Dog") directed, the screenplay was written by Harley Peyton (who was a writer for "Twin Peaks") and the cinematographer is Dante Spinotti ("The Insider"); and there's talent in front of it, the leads being played by Bruce Willis, that consistently underrated actor; Billy Bob Thornton; and Cate Blanchett.

You're conscious all through "Bandits" that you're supposed to be having a terrific time, that the movie is a romp designed to let you enjoy the fun of being bad. And yet it just lays there on the screen, flat and charmless.

There's something particularly annoying about caper movies that don't pan out. The people on the screen are romping around, doing their best to convince us that they're roguish and free, and yet the antic quality of the proceedings makes us feel removed. Or at least it made me feel removed. "Bandits" is going to be a big hit, perhaps because it continually winks at the audience. It works a little like a mutual admiration society of two people who while away a couple of hours telling each other how cute they are.

The movie might have been called "Butch Cassidy and the Sundance Kid and Jules and Jim." Willis and Thornton are two cons, a bank robber and his inept, hypochondriacal partner, who bust out of prison on a whim and make a name for themselves as the "sleepover bandits." Their m.o. is to stake out the home of a bank manager, hold him and his family hostage overnight (while doing their best to be perfect house guests) and then take the guy to the bank the next morning to open the vault so they can get safely away without any alarms being set off. Blanchett is a bored housewife they pick up along the way, only too happy to leave her loveless marriage behind. She gets involved with first one, and then both of the partners.

Barry Levinson's style of comedy (exemplified in his first and still best movie, "Diner") is derived from stand-up and improv. It's loose-limbed, off-the-cuff, dependent on the personalities of the actors and their ability to riff on whatever comes up in conversation. That's not to say it's unplanned, but that it's constructed so well as to make it look entirely spontaneous. "Bandits" is the sort of comedy that requires precision masquerading as shagginess, a sort of tall-tale brand of comedy. Levinson has taken care setting up the plot's flashback structure. And I suppose the story keeps moving. So why does the movie feel like a tire spinning in mud?

Maybe because we're watching a movie about a series of planned robberies (each of which goes awry in one way or another) and yet the content of each scene feels vague and woozy. In most of them, I had no idea what the actors were meant to be playing other than the tics they've been handed by Peyton's screenplay. They're playing to the camera rather than to each other, and the laugh lines just sit there. At the public preview I attended, the audience responded, but there was something tinny and unconvincing about the laughter, the sound of people responding on cue rather than being genuinely tickled.

Levinson not only doesn't find the fitting tone, he doesn't find the right visual style for comedy either. The cinematographer, Dante Spinotti, has shot the film with an air of surface realism. The grain of the images is more visible than it usually is in mainstream movies. (The same was true of Spinotti's work in "The Insider," but there it fit.) What's lacking is warmth and sheen, some visual polish that would be alluring, reminding us of the material goodies the bank robbers are after. There are some lovely shots of roadside motels. They look like the kind of cozy and inviting places you dream of finding on a road trip. But when Levinson shows a gaggle of plump Mary Kay saleswomen, all dressed in pink like a flock of fluorescent partridges, the image has no kick. It sits on the screen, along with the jokes and, I'm sorry to say, the performances.

How hard can it be to find a good romantic vehicle for Bruce Willis? No longer the young smartass he once was, Willis has a real capacity for vulnerability. (Watch him listening to "Blueberry Hill" in "12 Monkeys" and you'll see what I mean.) This role is a throwback for him: a middle-aged wiseass. Nothing he does is bad, but neither the script nor Levinson's direction brings out anything in him. There's no chemistry between him and Blanchett (who's ready to cut loose but is hamstrung in a role that's an assemblage of "free-spirited kook" clichés), nor between him and Thornton. What would draw these men together? Their repartee sounds like two men annoyed with each other rather than the affectionate annoyance that grows out of familiarity. And Thornton is really irritating here. The sensitivity that's supposed to be the attraction of the role is swallowed up by the tics he's called on to produce. Nobody has pulled off the hypochondriac routine since Oscar Levant (maybe because Oscar Levant really was a hypochondriac).

Nothing is more dispiriting than forced high spirits. "Bandits" keeps reminding you of what a good time you should be having. You leave with a feeling of being swindled, and that's the only genuine thing about it.