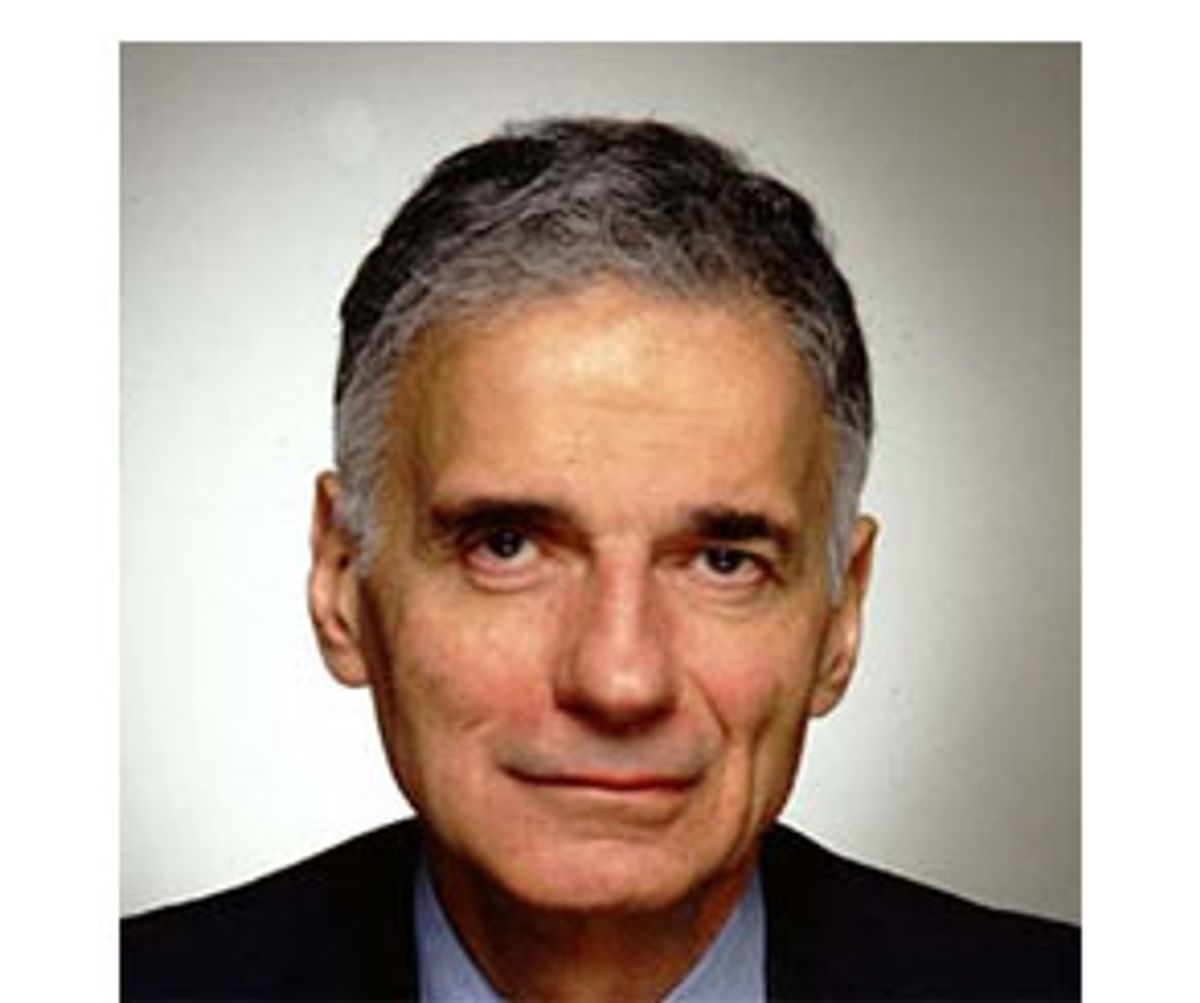 How would President Ralph Nader have responded to the Sept. 11 terror attacks? In the weeks after the spectacular assaults on New York and Washington, one could only speculate, since Nader himself remained largely mute on the subject. At rallies and press conferences, he warned against the "anger of misguided patriotism" but repeatedly refused to go into detail about the war on terrorism, instead focusing on local and domestic issues. While the rest of the country devoted its attention to Osama bin Laden, Afghanistan and anthrax, the progressive crusader stuck with his usual script, speaking out for universal healthcare, public control of utilities and an increase in the minimum wage.

But on Thursday night, Nader finally threw himself into the maelstrom. Speaking before a cheering crowd of 1,500 at San Francisco's Masonic Auditorium, Nader launched perhaps his broadest attack on Washington since the November election. After speaking for about 20 minutes on his favorite themes -- reforming the electoral process, curbing corporate power, ending poverty -- Nader set his sights on the government's anti-terror campaign, decrying the Bush administration's emphasis on a military response and congressional acquiescence in the face of a White House assault on civil liberties.

Instead of increasing U.S. security, said Nader, bombing Afghanistan would just give the Muslim world another reason to hate America. U.S. policies in the Middle East -- such as support for Saudi Arabia's repressive regime and sanctions on Iraq, which have created misery for its civilian population -- have already alienated much of the Arab world, he noted. Bombing Afghanistan will only hurt the country's weakest people, thus giving terrorists the images they need to recruit more killers, which is, he said, "exactly what they want."

"The little children are going to be the biggest sufferers," Nader said. "There's no such thing as a 'military' bombing. When you bomb out electricity, you also bomb the water-purifying plants."

The U.S. needs to radically rethink its anti-terror campaign, asserted Nader. Dropping "snacks," a reference to the American food packages dropped over Afghanistan , "won't do."

"We have to make sure we don't make more mistakes and worsen the situation by our actions abroad," he said. "We need to have a prolonged and detailed debate on foreign policy so we reorient our policies [to face] the post-Soviet era. [We need] to side with the millions and millions of workers and peasants for a change, instead of dictators."

As the U.S. tracks down the terrorists responsible for the Sept. 11 attacks, we should abide by international law, urged Nader. "When we caught the Nazi mass murderers during World War II, they could have been immediately disposed of, on the spot," he said. "Germany had killed 160,000 Americans by that time. But we didn't do that. We wanted to get their vicious record on the record. We wanted to reassert international laws, to uphold the rule of law, and we did."

The war spirit now seizing America has grown too intense, Nader insisted. Those shouting loudest for war have no personal experience with it, he said. "In our press and government, there is a heavy preponderance of hawks who have never worn a uniform. Maybe [Fox News anchorman] Brit Hume and [Asst. Defense Secretary Paul] Wolfowitz and [Vice President Dick] Cheney ought to go over there." Nader urged the audience not to let the hawks control the national dialogue. The public needs to rebel against the "thought police" who are demanding complete obedience to the Bush administration's war effort. "Truth is always the first casualty of war," he said, adding that it was the public's duty and its right to demand information.

"The reason that democracies always defeat dictatorships is because they're open to debate," he said. "We should never allow Washington to say, 'Shut up, get in line and wave the flag.'"

Attacking the Bush administration's attempts to control the press and public dissent, Nader remarked on the irony of a line that the president often used on last year's campaign trail: "I trust the people not the government."

Nader's own run for president angered many of his former liberal supporters, who blamed him for taking away votes from Democratic candidate Al Gore. In the last few months, Nader has focused on local reform issues and building grass-roots support for his Green Party, touring the country under the banner Democracy Rising. His seeming disinterest in vocally challenging the Bush administration's economic and environmental policies has further alienated some on the left.

Nader began his San Francisco stopover thinking and acting locally. Before the evening rally, Nader spoke before about 300 members of the Senior Action Network, calling for reform of California's electric utilities. None of the activists seemed to mind that Nader had nothing to say about the war in Afghanistan. "He's saying what the people here want to hear," said Lydia Garcia, a member of the group. "He's addressing housing, wages, solar energy. This is what concerns us, the seniors."

The international crisis, while important, shouldn't be the only thing that Americans care about, said Robert Halland, a supporter of a local campaign to create a municipally owned power company. "We're being drowned out" he said. "We're having a hard time getting people interested in issues that don't relate to what's going on internationally. We're even having a hard time getting people to realize that there's a local election on Nov. 6."

But during the evening rally, Nader turned his attention to the global arena, winning cheers from the largely college-age audience for his pro-peace sentiments. "He said so many things I needed to hear, about the way that children in Iraq are being killed and about what we're doing in Afghanistan," said Tian Harter. "I'm so glad he said what he did; we needed to hear it, hear that our foreign policy is way too brutal."

Nicole Carter, a college student, said that after listening to Nader she looked forward to expressing to her family her views on the war, which she had been holding in check. "I feel more confident, more able to express my opinion now about the way that our democracy is being pulled out from under us. I'm glad he pointed it out."

Not everyone left satisfied, however. Some said that they had hoped Nader would present more specific solutions to the terrorism crisis rather than simply criticize the Bush strategy. "I wanted something more concrete," said Samantha Gray. "I was alarmed and a bit afraid to hear him saying that it's as bad as he says it is. But I guess that's how it is. There are no easy answers."