As suspected bioterror incidents are reported from Oregon to New York, medical experts fear the nation is on the verge of a nervous breakdown. 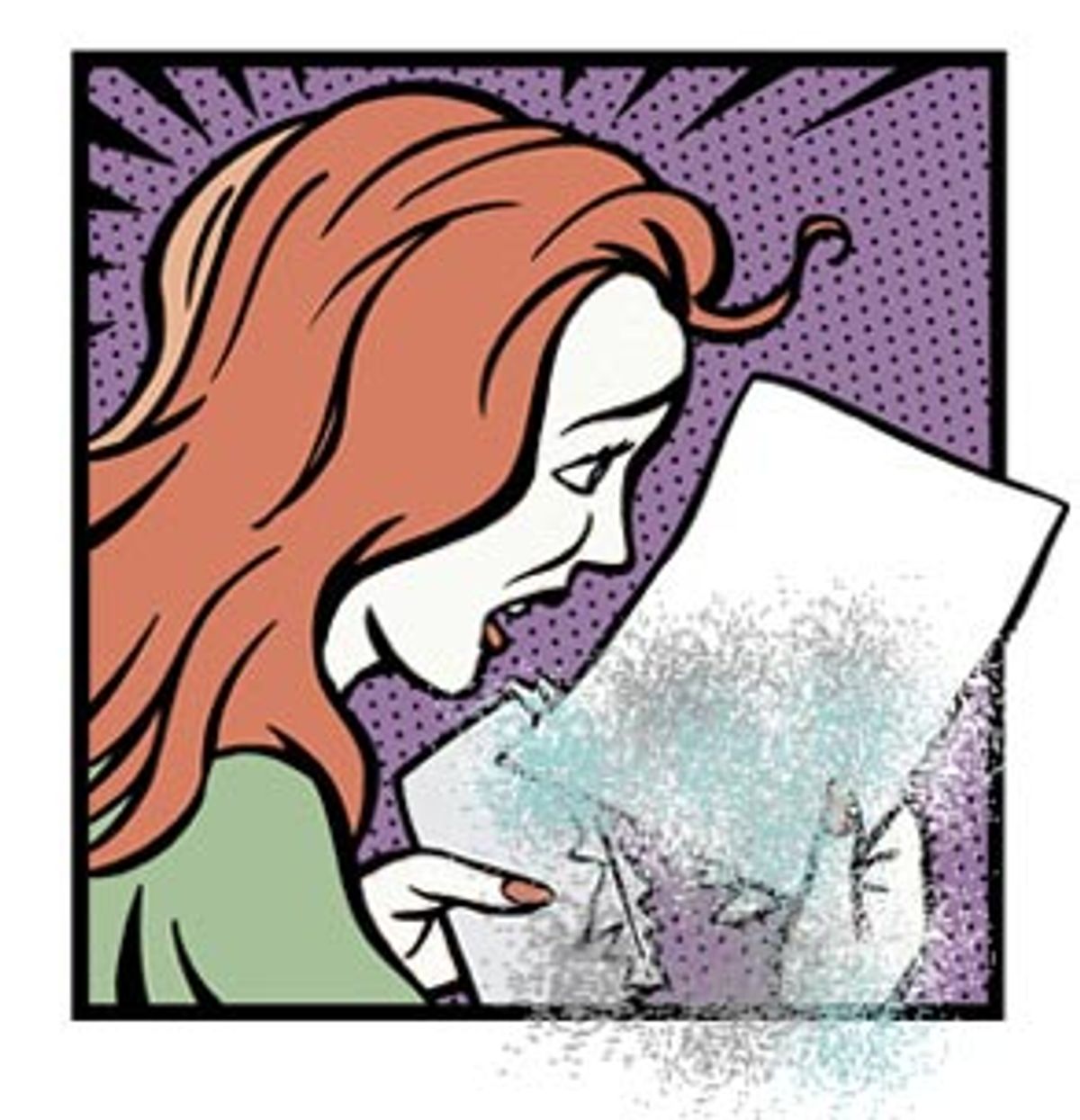 Around the same time, a suspicious powder on the roadway led police to close the main highway through Lake Oswego, a wealthy suburb of Portland, Ore., for three hours. The powder turned out to be wheat flour, dropped to mark a path for a jogging club.

In suburban Washington, D.C., police and local news teams rushed to an Episcopalian church, scene of the following emergency: A secretary had felt a "tingling of the mouth" after opening a dusty envelope.

Are we a nation on the verge of a nervous breakdown? In the brutal shadow of 9/11, in the peculiar wake of the still-mysterious Florida and New York anthrax cases, powders are giving people jitters coast to coast. Health departments, clinics and emergency rooms are swamped with calls from the worried well; scores of buildings have been evacuated, and some employees quarantined, by fear of unknown powders.

Historically, many mass psychosomatic disease outbreaks have occurred in closed social groups under pressure -- among Tokyo subway riders, for example, or teenage girls in the hothouse of junior high.

"We're all in the hothouse now," says Dr. Timothy Jones, an epidemiologist at the Tennessee Department of Health.

Seven or eight Internet medicine-peddling sites have even added ciprofloxacin -- the antibiotic of choice for inhalation anthrax -- to their wares.

"Cipro and Viagra -- that kind of blew me away," said Dr. Michael Fleming, a family practitioner in Shreveport, La. Fleming has already talked down two patients -- one with a cough, the other with a small rash -- who were convinced they had anthrax.

Wars have a way of spreading psychosomatic illnesses among the hometown crowd. In 1944, during the Battle of the Bulge, 29 people in Mattoon, Ill., by ones and twos, began to fall faint, to vomit and grow dizzy. Some said they'd been sprayed with a sweet-smelling gas by a man hiding in the bushes. The Mad Gasser of Mattoon, the tabloids called him. During the Gulf War, 17 Rhode Island teenagers and teachers became ill after an imaginary toxic gas release.

While no one can know how much anthrax will surface in the United States in the coming months or years, for every real case there will probably be hundreds of patients whose illness is mainly in the head. "The perception of the disease could be worse than the reality," says Dr. Peggy Neill, a Brown University professor who heads the Infectious Disease Society of America's bioterrorism committee.

The prospect of mass hysteria is not to be taken lightly, some believe. In a month or two, flu season starts -- and it has the potential to be rough on the mildest of hypochondriacs. Influenza, with its pounding headache, cough and high fever, is nearly identical to the early symptoms of inhalation anthrax. Public health officials have started urging American adults to get flu shots this year -- not only to prevent flu, but because they also enable doctors sniffing for bioterror germs to rule flu out.

"Flu season is scaring us all, because people are hearing in the media how similar the symptoms are," says Jones. "And medical folks are not good at predicting how severe a flu season is going to be."

In a study published in the New England Journal of Medicine last year, Jones dissected a 1998 mass hysteria outbreak at a McMinnville, Tenn., school. There, 170 students and teachers were hospitalized or treated in an emergency room. A teacher fell ill after reporting a "gasoline-like smell" in her classroom; several other students reported symptoms and ambulances began arriving. Subsequent waves, the study found, fed upon the earlier alarms.

"There were lots of sirens in front of the whole school and it spread like wildfire," Jones says, adding that when a building is evacuated because of an anthrax scare, "it could lead to psychogenic symptoms even if the threat is later shown to have nothing real about it."

The more obvious public health downside of the anthrax scare is the run on Cipro and gas masks, both worthless personal weapons against anthrax. Gas masks wouldn't be put on until invisible anthrax spores had already spread around. As for Cipro, leading physician groups strongly oppose personal stockpiling.

"Why is this not a good idea?" Neill asks rhetorically. "In the first place, you are pulling something off the shelf that is not available to people who need it." Cipro is prescribed for severe urinary tract infection, and bacterial diarrhea, among other uses. "Second, these stockpiles go into private medical cabinets without the benefit of informed medical opinion. If there were an anthrax attack, and you treated yourself instead of going into an emergency room, you could end up compromising your own care."

Most important, Neill says, is the obvious point that stockpiling personal means of protection, however ignorant, is also mean-spirited.

"We're all in this together," she says. "There is a national pharmaceutical stockpile that represents a community-level response to this problem."

Still, amid the reports of funny-smelling packages and mystery liquids, of anthrax vectors aimed at tabloid photographers and news anchor mail openers, the run on Cipro continues. One Washington family practitioner got requests for prescriptions from the local NBC affiliate Friday morning -- and the ABC team an hour later. He told them both to get lost. "The place for treating anthrax is in the intensive care unit -- and that's only if you're actually sick."

"We're getting inundated with calls from doctors and patients," added Shelly Pumphrey, a nurse at an infectious disease practice in Washington. "And people are really up in arms because we're refusing to prescribe Cipro to everyone who wants it."

What concerns Neill is that runs on Cipro and vaccine supplies reveal that people are unaware of the steps government has already taken to prevent biowarfare outbreaks, or at least to detect and shorten them. Billions have been spent on the program in the past several years. "People haven't been given adequate reassurances," she says.

Although no system can guarantee that no one is going to die in a terrorist attack, the government response to the Florida anthrax case showed that the existing system is working pretty well. The infectious disease doctor who treated Bob Stevens noticed rod-shaped anthrax spores while testing for bacterial meningitis; anthrax would probably never have occurred to this physician had the CDC not begun alerting physicians to the risk recently. "Push-packets" of medicines and biomedical hardware were shipped to Boca Raton within a day of the confirmation of the first case.

In a massive anthrax attack, all this might be too late to save hundreds of lives. But the likelihood of a mass attack is not great. The Iraqis tried and failed to figure out how to disperse anthrax with bombs and missiles. Without U.S. or Russian help and/or a sophisticated lab, terrorists wouldn't be able to use the germs for killings on a massive scale. Aum Shinrikyo, the Japanese terror cult, made eight tries at dispersing biowarfare agents in the city of Tokyo -- failing each time.

Jonathan Ban, an analyst at the Washington, D.C.-based Chemical and Biological Arms Control Institute, conducted an assessment of biowarfare for the CDC in July that concluded that smaller-scale attacks, perhaps not dissimilar to the Florida episode, were the most likely form of bioterrorism. The key to blunting such attacks, Ban says, is neither the National Guard nor Hazmat suits, but good information and communication.

The quicker disease germs can be identified, the quicker accurate news of an outbreak spreads, the faster doctors can identify, treat and, when necessary, quarantine patients. Lots of defense research money has already gone into biosensors and molecular quick-identification techniques -- some of which were used experimentally in Florida -- and hundreds of millions more is in the pipeline.

The spinoff of better detection and reporting networks is that such technology works for all infectious germs, not just those spread around by evildoers. "It's a great investment," says Ban. "These are tools for public health for everyday natural diseases. And our public health system has deteriorated in the last 20 years."

As for diagnosing psychosomatic illness, it's often characterized by tingling around the mouth and fingertips, lightheadedness and dizziness -- classic symptoms of breathing too fast, says Thomas Nagy, a Palo Alto, Calif., psychologist. "The antidote is to drop your shoulders and breathe from the tummy."

Further advice for the anthrax-obsessed is to sit back, watch your tax dollars at work and hope for the best.

And get a flu shot.