The Hughes brothers' portrait of Jack the Ripper and Victorian England misses the intricate and disturbing nature of the graphic novel on which their film is based. 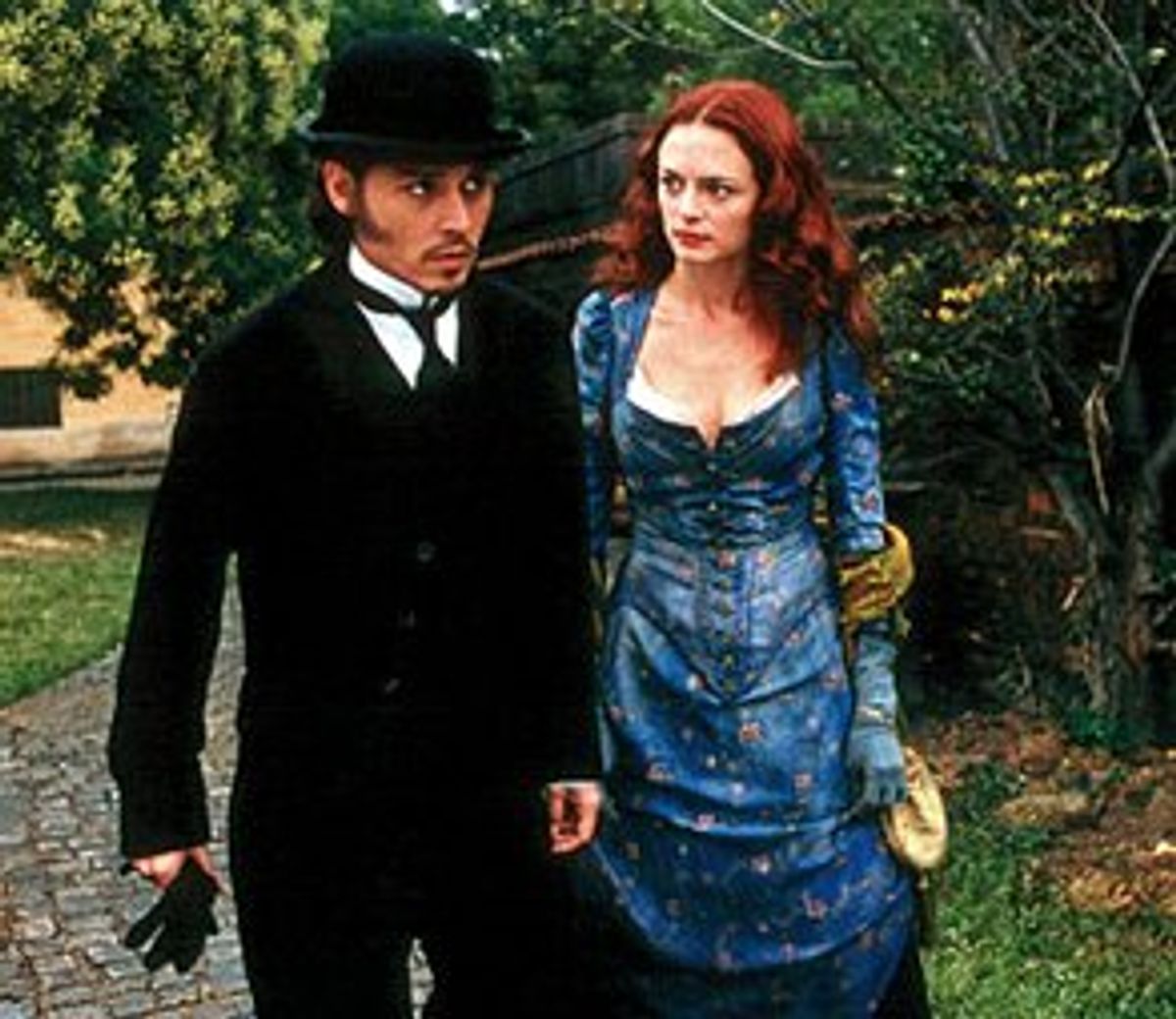 Ever since the film was announced, the press has commented on how incongruous it was that Allen and Albert Hughes would stray from the modern urban American milieu of "Menace II Society" and "Dead Presidents" to the Victorian London setting of "From Hell," Alan Moore and Eddie Campbell's graphic novel about Jack the Ripper. The unasked question was, "Why do they want to do it?"

Now that the film is opening, that question has been answered: "They don't." The Hughes' version of "From Hell" is an extravagant period farrago that bears only a superficial resemblance to the novel. Of course, filmmakers have to be allowed the freedom to interpret or diverge from their source as they wish. But whatever choices they make does not mean that the source has been banished from memory. Yes, films have to stand on their own, and good movies can radically alter the meaning of the source (Robert Altman's film of "The Long Goodbye" and Roman Polanski's film of Ariel Dorfman's "Death and the Maiden" are just two examples). But adaptations that are inferior to the source deserve to have that inequality held against them.

Alan Moore and Eddie Campbell's "From Hell" is one of the most intricate and disturbing works that the field of graphic novels has yet produced. Springing from the gossip and speculation that has long named Queen Victoria's syphilitic son Prince Albert as Jack the Ripper, "From Hell" spins a variation on that theory. In Moore and Campbell's version, Albert falls in love with and marries a young prostitute by whom he has a son. Fearing a scandal that could rock the throne, Victoria calls on her physician, Dr. William Gull, to silence the mother, who has been placed in an asylum. A group of the young mother's fellow prostitutes decide to make some money with their knowledge of Albert's marriage and try to blackmail the Queen. Victoria once again summons Gull, who sets about silencing these women by murdering them.

The graphic novel is essentially a feminist work, in which the Ripper murders are the logical outcome of the sexual repression of Victorian England. The novel is loaded with graphic, shocking scenes. But nothing in it makes the blood run cold as much as the moment when Victoria hands Gull a list of the women to be silenced. She says, "We leave the means to you, Sir William. We would simply it were done, and done well." The obscenity of the moment comes from the disparity between what she is asking and the prim language she uses. And Moore and Campbell don't stop there. Gull, half-mad and steeped in pagan lore, designs the killings as a tribute to those pagan powers, the locations of the bodies forming a pentangle at the center of which is St. Paul's Cathedral. It is, in the view of the authors, less the ultimate blasphemy than an unholy revelation. It's Moore and Campbell's intention to tear down the wall that separated the powerful and the impotent in Victorian England by linking all that was most revered in that society to its most ghastly crimes, saying in effect that the Ripper killings were simply the most extreme examples of that society's everyday crimes.

Rendered in inky black-and-white panels, the graphic novel absolutely shuns the picturesque nostalgia which is always a danger with period works. The look of the movie couldn't be more different. Working with the cinematographer Peter Deming ("Mulholland Drive") and production designer Martin Childs, the Hughes brothers have splashed out on a period re-creation that manages to make even the crummiest back alley and sewerage-infested streets look like the latest addition to some historical theme park: Squalorworld.

The movie is big on fire-red skies and black clouds, wet cobblestones, flickering gaslight, and cloaked figures moving through the fog. In other words, it revels in exactly the sort of horror-movie clichés that held no interest for Allan Moore or Eddie Campbell. "From Hell" evokes nothing so much as a pair of small boys given the budget to make their own version of the Hammer horror movies they've gorged on. Which would be fine if the result weren't such a brain-dead version of a dark and complex work.

The screenplay, by Rafael Yglesias and Terry Hayes, has chosen to turn the movie into a whodunit, with the Ripper's identity withheld from us until the very end. What this means, of course, is that the novel's most daring material -- about Queen Victoria's complicity in the Ripper killings, and the dark, pagan artifacts dotting London -- is simply jettisoned. What's been substituted is a pathetic little object lesson on prejudice. Abbeline (Johnny Depp), the inspector working the Ripper killings, insists to his superior, Sir Charles Warren (Ian Richardson -- overacting as usual), that the killer must have had an intimate knowledge of anatomy. Warren insists that no educated man would have been capable of such a thing. He says the Ripper must be a Jew or an Indian escaped from a wild west show. Clearly, the Hugheses mean us to see this as the Victorian equivalent of how some minorities today are assumed to be criminals. They're not wrong, but their source goes beyond that easy equivalency.

One critic has already remarked that the butchery done to Moore and Campbell's work is the equivalent of the butchery done to the Ripper's victims. That's a pretty good analogy. Instead of a family man struggling with the corruption of his higher-ups and the temptations of the low life he comes into contact with, Depp's Abbeline has been made a clairvoyant opium addict who sees the crimes in his visions. Depp, the softest spoken, most likable of actors, does just fine suggesting a man who has withdrawn into opium as a means of dulling the pain of losing his wife and son in childbirth. His British accent is uneven but accents are disposable things, the easiest way of confusing technical proficiency with good acting. Most of the three scenes between Depp and Ian Holm, as a respected surgeon whom Abbeline consults on the case, are a relief from the stylistic thrashing about of the rest of the movie; for a few minutes you get to watch two good actors simply responding to each other, with no fuss. (Though no actor could triumph over the whipped-up emoting Holm is eventually called on to do.)

The Hugheses come up with some good effects -- the Ripper simply vanishing into thin air as he leaves the scene of a crime, or the way, when the Ripper's identity is revealed, that his eyes become jet black. (The directors also wreck the effect by repeating it over and over.) With a few exceptions, it's a relief that we don't see the worst of the killings. But I found the "discretion" of those scenes worse than even the grisliest detailing of the killings in the novel. And that's because the movie is nothing but style -- the period recreations and "Se7en"-style shock cuts and montages employing distorted color and grainy film stock.

What's lost is the detailing of the relationships that Moore and Campbell provided. The novel gives a sense of the tangled relationships between the targeted prostitutes and their clients; there is an inextricable mixture of both callousness and care among the women and the men who use them that complicates our responses. The Hugheses have reduced all the interactions to rutting in their immaculately lit back alleys. And they've lost the novel's touching relationship between Abbeline and Mary Kelly (Heather Graham), the prostitute who decides to aid him in his investigation for the sake of a romance that feels like nothing more than a contrivance.

The gaudiness of "From Hell" might make the film effective for some viewers, on its own cheap terms. But the movie is a disastrous example of filmmakers whose reductive sensibility is not up to the density of the work they've undertaken.