"Riding in Cars With Boys"

Stop, pull over and step away from this Drew Barrymore vehicle. 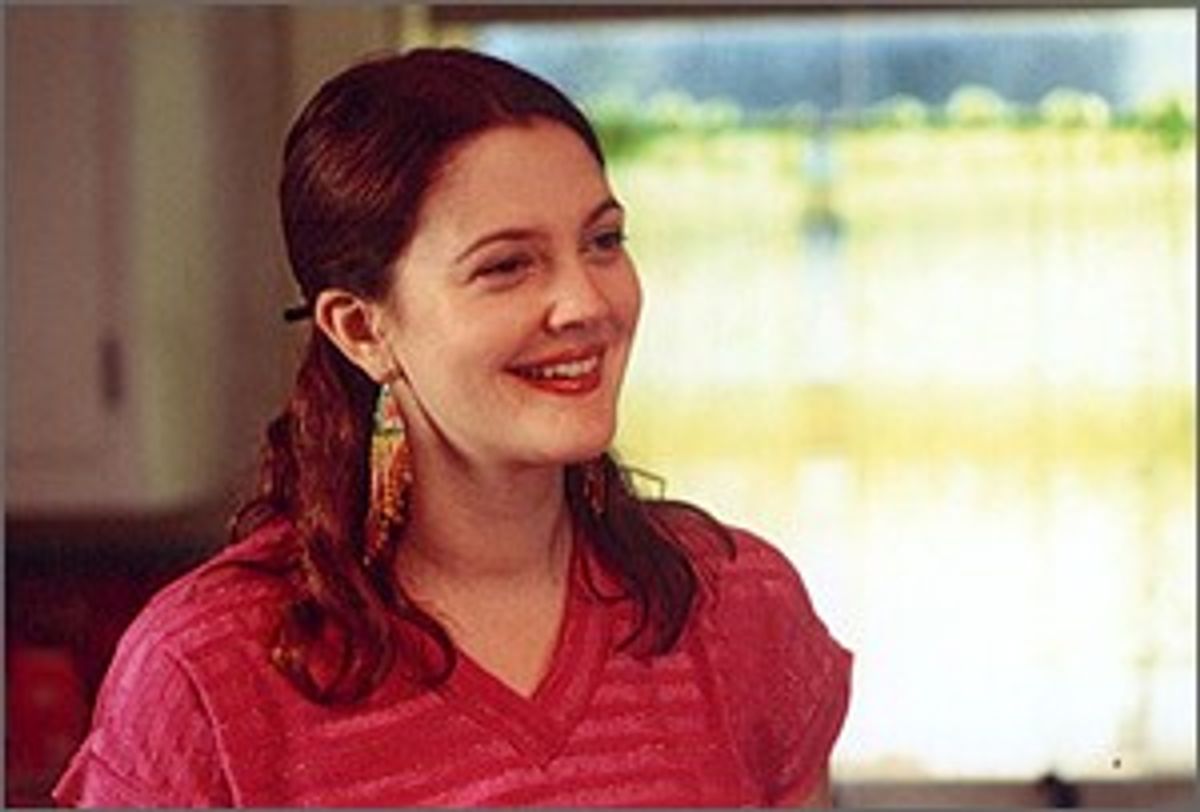 Penny Marshall is often cited as one of the most successful woman directors in Hollywood, which is lovely until you consider that she's also one of the lousiest, of any gender. The proof is in "Riding in Cars With Boys," a gangly adaptation of a fast-moving, unsparing little memoir by Beverly Donofrio, who became a mother at 17 but managed to get herself through both college and graduate school. Every scene is coated with Marshall's thumbprints, ultimately connecting into a manhandled, mangled, misshapen whole, its themes written out in thunderously obvious cues.

The appeal (and the fun) of Donofrio's story lies in the way she defies conventional expectations -- maybe she fulfills some of the stereotypes of the '70s-era single mom, but she busts others wide open. Marshall, on the other hand, marinates the movie in conventionality like a '50s mom basting a pot roast, which wouldn't be a crime by itself if she only knew where to put the camera, or had any sense of how to guide actors or shape a scene.

Marshall's biggest crime in "Riding in Cars With Boys" is the way she undermines the subtlety of her actors. She has the use of some terrific ones: Drew Barrymore plays Beverly, a boy-crazy teenage troublemaker in a bouffant do, circa 1965. Her family is working-class Connecticut stock. Her father (James Woods) is a strait-laced cop; her mother (Lorraine Bracco) is a homemaker.

Bev and her dad used to get along famously when she was a kid. Early in the picture, we're treated to a syrupy sequence in which the two sing along with the Everly Brothers' "Dream" on the car radio -- and if your attention should drift momentarily during this misty moment, don't worry, because it will be reprised later in the movie in case it didn't thump you hard enough on the head the first time. When Bev reaches puberty, though, the two grow apart, and the rift deepens when Bev gets knocked up by her boyfriend, Ray (Steve Zahn), whom she ends up marrying at the age of 15. (Donofrio actually married at 17.)

From there -- the picture spans the years 1965 through 1985 -- Bev's life gets even tougher: She has the help and support of her best friend, Fay (Brittany Murphy), who also has a young child. But when her fragile marriage takes a nose dive, Bev is left to raise her son, Jason (played by several actors), by herself.

The relationship played out between them is supposed to be a richly complicated one, which only makes sense: Jason is a child being raised by a child, and there are plenty of times he has to play the adult to Bev's "girls just wanna have fun" arrested adolescent. But at their worst, which is most of the time, they're two self-centered monsters stubbornly clunking heads -- their relationship isn't written or played out with enough skill or delicacy to make it particularly interesting. Half the time you're simply wishing they'd put a lid on it.

And huge chunks of the movie seem to be simply missing in action. Bev's big dream, as we're reminded repeatedly like so many whacks to the kneecap, is to go to a top-drawer New York school. (The name "NYU" is uttered over and over again in dreamy, reverent tones usually reserved for candidates for beatification.) We see Bev applying to a special program early on in the movie, but we never see her actually get admitted anywhere. Eventually we're told that she has zipped through her schooling and has managed to land a publishing deal for her memoir, but we have no idea how she got there.

The actors do their best with Morgan Upton Ward's wobbly screenplay. Murphy has a few scenes where her sweet, lost-in-space flakiness flourishes into something brighter and tougher, even though Marshall doesn't quite know how to play it up. And Barrymore works her role here valiantly. She's often been given more credit for being a charming presence than a gifted actress. It's been hard to convince audiences that her nicely turned performances in movies like "Home Fries" or "Ever After" were more than just riffs on her own bubbly personality. But she's one of those actresses who responds so naturally and effortlessly to the camera that she's often able to tap something true and deep.

Here, though, she's best in her most offhanded moments -- as when, having donned a party dress for a teenage soiree at which she hopes to seduce her latest crush, she absent-mindedly fans her armpits before joining the fray. When she's called on to do more -- particularly in the '80s scenes, where she's done up in frightful dragon-lady makeup designed to make her look older -- she comes off feeling forced and awkward, as if she'd had trouble latching onto her place in the movie.

Zahn's performance is the only one that shines defiantly in the face of bad direction. He's always an astonishing comic presence -- with his easy knack for delivering a line a half-beat late, he's the equivalent of a seemingly lazy jazz musician who's actually got the time right in his pocket.

But Zahn can make you giggle even as there's something about him that's taking you apart inside. He works minor miracles with the most basic lines of dialogue, just by doing something as simple as putting the right amount of hesitation between the words or glancing away so briefly you barely register the flicker of his eyelashes. "I love you. A lot," he tells Bev at one point, and just after he's said "I love you" -- just as we're looking in wonder at his face and everything it's giving up to us -- Marshall switches camera angles so we can't see him.

There are plenty of other times where Marshall's camera feels exhaustingly attentive -- she works the teat of high emotion like a state-of-the-art electronic cow milker, to the point where it wearies us just to watch. But in the face of something we actually want to see, she swings the camera away, and it feels like deprivation. This Marshall is worlds away from the one who gave us the witty and entertaining "Big." Why does she punish us so, all in the name of good old-fashioned mainstream entertainment? The answer may be simply that she doesn't know any better. If that's success, a woman needs it like a fish needs a bicycle.