Since Sept. 11, the British journalist has declared himself the mullah of the media world, sitting in judgment of American writers' patriotism. 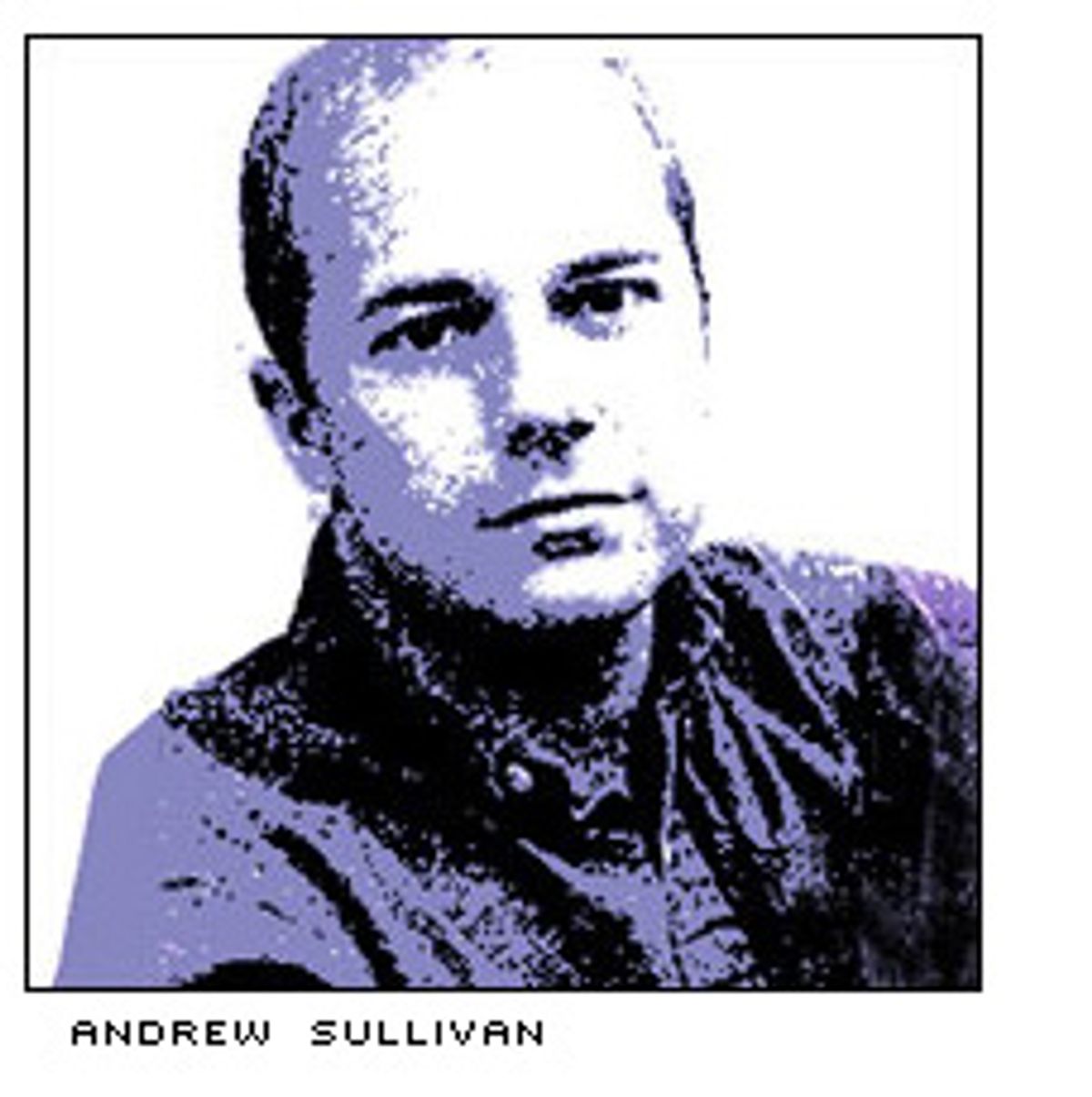 I like and respect journalist Andrew Sullivan, though I often disagree with his opinions. I find much of what he has to say about soggy thinking on the left to be a bracing tonic -- which is why Salon has published his views, along with those of David Horowitz, Norah Vincent, Camille Paglia and other conservative or independent critics of lockstep, left-wing thought. On the few occasions I've had the pleasure of his company, I've enjoyed his wit and charm. Since the horrors of Sept. 11, however, Sullivan's voice has become a shriek, hitting an ear-piercing decibel that, whether intended or not, drives out the possibility of rational discussion.

In recent weeks, Sullivan has taken it upon himself to evaluate whether his fellow writers and commentators are sufficiently patriotic. He broods darkly -- in the pages of his native British press, on his Web site and on the Op-Ed pages of the Wall Street Journal -- that America harbors nests of traitors, or in his words "decadent left enclaves on the coasts [that] may well mount a fifth column." And like all Manichaean guardians of national security, from the days of the Alien and Sedition Acts to those of Joseph McCarthy, Sullivan has turned his pumped-up and disproportionate rhetoric toward rooting out these disloyal Americans in his midst.

On his Web site, he does not just engage antiwar writer Katha Pollitt, whose tortured ruminations in the Nation on whether to fly a flag from her New York apartment window were admittedly neurotic and absurd. He seeks to obliterate her, gloating after a lopsided debate with her on public radio that "I took no prisoners." In the church of Sullivan, those who criticize or express ambivalence about the bombing of Afghanistan are not just wrong -- they are corrupt souls who must be excommunicated from the American congregation.

Turning his gaze of moral reproach on Salon, Sullivan has branded Gary Kamiya an appeaser for proposing that it's time for Washington to put pressure on the Israelis and the Palestinians to reach a peace settlement -- even though the tough and worldly men Sullivan so ardently admires in the Bush administration began taking this very line days later. And Friday, Sullivan lashed into me for conducting an interview "on [my] knees" with Susan Sontag, in which she characterized the bin Laden terror network as implacable and deadly foes while criticizing the bombing campaign's impact on civilians. Sullivan was as incensed by Sontag's remarks as he was by my introductory comments about the efforts of Sullivan's conservative colleagues to banish her from the world of acceptable intellectual discourse. "These pampered journalists," he fumed, "who have never seen a moment of real censorship in their lives, and who have marginalized conservative voices for their entire careers in their own organs and field of influence, take the occasion of the massacre of thousands of their fellow citizens to worry about themselves -- and preen self-righteously at the same time."

Since Sullivan has unleashed the hounds of patriotic fury, I'll respond with some nationalistic zeal of my own. It's repellent to be lectured about my commitment to America, which is deep and true, by an arrogant and self-important Brit. And it's equally galling to be scolded about my supposed intolerance of conservative dissent in Salon when I have made a consistent effort to include Sullivan's own voice and that of many of his fellow conservatives in our pages. Sullivan has often fallen to his own knees before President Bush in Salon. In fact there is no political journal in the country -- on the left or right -- that publishes as eclectic a mix of opinions as we do. The same week we published the interview with Sontag, Salon ran a cover essay by her son, David Rieff, blasting the Berkeley City Council's anti-bombing resolution and the "depraved rationalizations of the American left." When Sullivan seeks ideological variety, does he eagerly reach for the latest National Review or Weekly Standard? His own site is rigorously monochromatic -- one-note blasts from the increasingly narrow confines of his own head.

Earlier this year, Sullivan was exposed by the gay press for advertising for "bareback" sex (unprotected by condoms) in an AOL chat room and denounced as a hypocrite by his liberal gay critics for engaging in risky sexual practices after attacking President Clinton for his own incautious behavior. Salon was among Sullivan's most vocal defenders, running two pieces that condemned the invasion of his sexual privacy and the political motivations behind his "outing." It wasn't FreeRepublic.com that rallied around Sullivan; those conservative "enclaves" are too busy tossing kindling on the pyres to burn the sodomites. Their latest cause is blasting the Bush administration for apologizing on behalf of the Navy crewmen who painted "hijack this, fags" on missiles headed toward Afghanistan.

Speaking of the "decadent left enclaves on the coasts," who does Sullivan think fights for his right to enjoy the sexual pleasures of his choosing? His increasingly intolerant rhetoric is an affront to the very culture that protects him. If a right-wing theocracy ever came to power in America, guess who'd be the first person whose ass would be rounded up, self-described "power glutes" and all? And guess which Web journalists would be among the first to demand his freedom?

Sullivan's Taliban style of argument and his rigid habit of separating the world into the blessed and the damned turns American politics into a free-fire zone where any deviation from his view of the national program is immediately leveled. His absolutism has no way to account for someone with my views -- and there are many like me --without grossly caricaturing them. I strongly support the U.S. air and ground war against bin Laden and the Taliban. I believe unrelenting military force is the only way to destroy this ruthless enemy. I proudly display an American flag in my window. But I also believe that unless America works just as hard at making peace in the Middle East as we currently are at making war, our country will never be safe. And I believe that the American cause is served, not sabotaged, by those who disagree vehemently with my positions.

It is true that the urge to censor comes not just from the right, but also from the left. When U.C.-Berkeley's student government denounced a campus cartoonist for his allegedly culturally insensitive swipe at Islamic terrorists and clamored to put his editors in a reeducation program, these young centurions of correct speech were rightly blasted throughout the media world and quickly wilted under the fire. But journalists, including Sullivan, should be particularly vigilant against censorship when it's advocated by the government. It may strike Sullivan as "pampered" for American journalists to worry about this, but our ancestors fought and died for the right of free speech. During every crisis in our country's history, this freedom is the first to be challenged by self-proclaimed patriots as a threat to national security. If the press and the public don't fight for freedom of speech at times like these, it will quickly become a hollow right.

Andrew Sullivan is an insightful and intelligent man. He needs to pull back from his current jihad. There is too much testosterone pumping through his veins these days. He is right to be furious. The country has suffered a grievous blow -- one stunning in its premeditated wickedness -- and we are still being afflicted with threats to our security. The terrorist assault demands and is receiving a ferocious response. But it also demands that we all think deeply and carefully about how to make the country and the world safer, not just scream in outrage.