In Cipro we trust?

A pre-Gulf War study showed that a combination treatment of antibiotics and vaccination is the best way to fight anthrax. So why is the government relying on one drug? 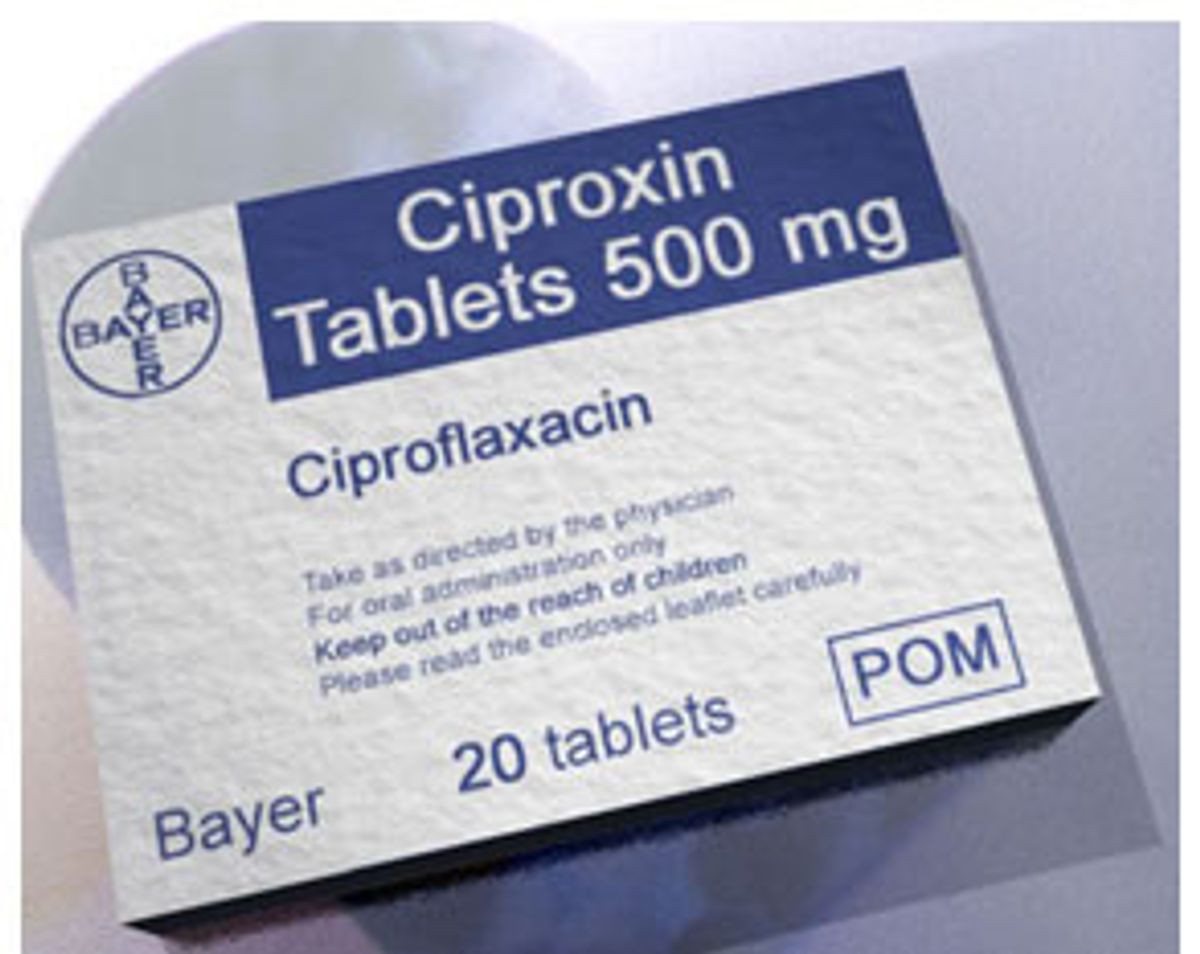 Public health officials announced Thursday that all the mailed anthrax discovered so far comes from a single batch that is diabolically aerodynamic but blessedly susceptible to "all the antibiotics that we have," in the words of Maj. Gen. John Parker, commander of the Army's biowarfare defense labs.

Yet, despite Parker's comment, and the Centers for Disease Control's recommendation that doctors use either Cipro or doxycycline to treat suspected cases of anthrax, Cipro alone has been given to more than 10,000 people who might be infected with anthrax. And it is Cipro that the government has obsessed over, haggling with Bayer to buy 100 million pills at the cut-rate price of 95 cents each.

In normal circumstances, doctors wouldn't be routinely handing out a drug like Cipro. It belongs to a fairly new class of drugs that are expensive and broadly targeting, wiping out large varieties of bugs. They are also expensive and generally held in reserve for serious infections, to keep them from creating new drug-resistant strains of bacteria.

So why is Cipro the drug of choice for anthrax? To understand that you have to go back to 1989, when the military, anxious to protect soldiers heading off to fight Iraq's Saddam Hussein in the Gulf, asked Col. Art Friedlander, a top scientist in Parker's command, to find a good defense against anthrax.

Why Friedlander included Cipro in his experiment -- the Food and Drug Administration had approved it only two years earlier -- isn't fully clear. The drug proved no more effective than other antibiotics. Of the 10 untreated monkeys, nine died. Thirty others each got either doxycycline, penicillin or Cipro for 30 days starting the day after their anthrax exposure. None died of anthrax while on antibiotics.

Ten years later, it was the FDA -- and not Bayer -- that pushed for Cipro's licensing. The July 28, 2000, advisory committee hearing where Cipro was considered was a surreal affair. Most drugs are tested on hundreds of people before the FDA approves them for a specific use. Cipro was approved for anthrax without a single human patient getting it, after a trial of monkeys in which it was no better than two older drugs.

Bayer's U.S. representative, Andrew Verderame, admitted that he knew nothing about anthrax. Not only was Bayer uninvolved in gathering anthrax data, it explicitly washed its hands of any post-marketing research.

"Should an exposure occur, your assistance would consist of evaluating data collected and examined by the FDA," FDA official Diane Murphy wrote in an Aug. 30, 2000, letter conceding the point to Verderame. "You will not be required to collect, handle or evaluate any clinical specimens or otherwise expose your staff or operations to any potentially contaminated area or substance," the letter stated.

When puzzled members of the advisory committee asked why the FDA was touting Cipro, Murphy, who was in charge of licensing the drug for anthrax, referred to classified information that "there are organisms that have been altered to be penicillin- and doxycycline-resistant."

Those organisms are presumed to be Russian, or Iraqi, although the United States, too, may have tried to engineer such bugs 35 years back, in the days of Cold Biowarfare.

Martin Hugh-Jones, a Louisiana State University professor of veterinarian medicine whose vocation and evident pleasure is to collect strains of anthrax, revealed at the hearing that he'd found a Cipro-resistant bug. That anthrax came from a Sicilian goat that died in lonely obscurity in 1996 -- apparently unknown to the Russians, the Iraqis, Osama bin Laden or the Michigan Militia.

So, why place the emphasis on treatment with Cipro? Why, after the anthrax from the letter to Sen. Tom Daschle proved susceptible to all antibiotics last week, did public health officials proceed to give 4,000 postal workers Cipro for 10 days?

Basically, there is no reason, other than the need for extraordinary precautionary measures. Cipro penetrates tissues more quickly than some other antibiotics, and anthrax is a germ that killed Russians "in the middle of a sentence" after they were exposed to a leaky biowarfare factory in the city of Sverdlosk in 1979, as Hugh-Jones reports. It's a germ that even in the wilds of Africa "kills hippopotami so fast they don't even fall over."

"People think there's only one drug and that's wrong," Murphy conceded in an interview Thursday. "But you don't want to be the doctor who assumes the strain was sensitive to an antibiotic and finds out that it wasn't -- when the patient dies."

In an article published Thursday in its Morbidity and Mortality Weekly Report, the CDC announced that Cipro or doxycycline was acceptable first-line treatment for anthrax, with a combination of two antibiotics preferable once anthrax infection was confirmed. Penicillin-type drugs are not advisable, the CDC said, because the bug appears to have the capacity to become penicillin resistant.

Once the strain has been confirmed, Murphy said, doxycycline would be preferable because Cipro "is using a cannon to shoot a fly. The fluoroquinolones kill a lot of good bugs in your system in addition to the bad bugs."

Other army experiments with Cipro showed that anthrax can develop Cipro-resistant strains when exposed to the drug chronically. And then there are side effects.

Cystic fibrosis sufferers have wide experience with Cipro. While some are now complaining that they can't get supplies of the drugs, others say it can be nasty stuff.

"I got acute kidney failure when I was on Cipro two years ago," says Barbara Palys, a cystic fibrosis patient in the Boston area. "Now I keep hearing from people whose pharmacies are out of it."

Cipro caused lameness in young dogs in one experiment, and children using the drug are at increased risk for joint diseases. Yet the FDA and CDC recommend using Cipro for 60 days if there's any suspicion of anthrax. The fear is that anthrax spores, which are not killed by antibiotics, could hide out in the body for that long.

And they have good reason to be concerned. All the monkeys in Friedlander's experiment survived anthrax exposure for the month they were on antibiotics. But when they went off the drugs, five of the 29 died in the following month. Anthrax spores presumably lurked in their bodies -- waiting to sprout until the monkey bloodstreams were antibiotic-free.

Which raises another question. In Friedlander's experiment, the best-protected group was 10 monkeys that did not receive Cipro but rather doxycycline in combination with vaccine.

In top government circles, according to a well-placed researcher, debate is currently raging about whether postal workers and others in "sensitive" lines of work should be vaccinated before their antibiotics run out. "With what we know about this anthrax, there's at least a question as to whether people could be re-exposed returning to their buildings," the physician said.

Complicating the issue is the fact that the army's only vaccine has been plagued with problems. Hundreds of servicemen and women complained of adverse reactions to the vaccine; at least 500 have quit the military rather than get the required six shots. Now, the only lab that makes the shot has been shut down for three years, and the military is running out of supplies of the vaccine.

"My best guess is that they should offer it to these people," said the researcher, a physician at a top biodefense studies center. "But the dwindling supplies are in the hands of the military, and I don't know whether they are going to want to release them."