By reaching for the remote control instead of sending ground troops into Afghanistan, the U.S. is reinforcing its international image as the schoolyard bully, a British critic argues. 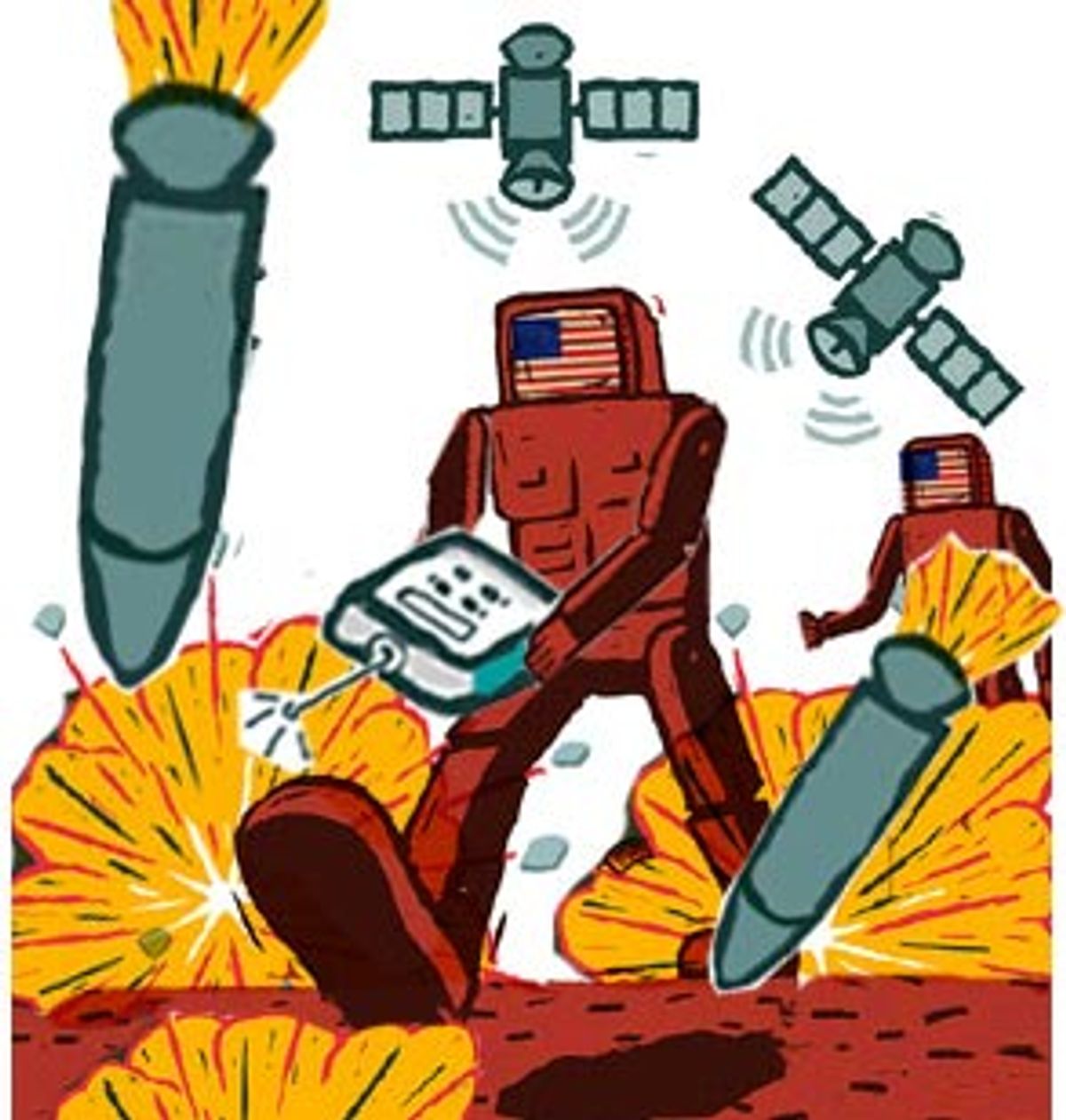 It's been a week since American special forces first got their boots dirty in Afhganistan, and there is growing speculation about a ground assault involving U.S. and British forces. About time, too, you might think. Operation Enduring Freedom promised us justice in response to the horrors of Sept. 11, to say nothing of Osama bin Laden's head on a platter.

Earlier this week, Democratic Sen. Joseph Biden, D-Del., drew the scorn of Republicans when he argued that America would be perceived as a "high-tech bully" if it were unwilling to send ground troops in to face off against the Taliban. But Biden was right.

No one doubts there will be a landing by Army Rangers, and others, backed up by British marines. What is significant is that this will take place only when the Pentagon has judged it "safe." The truth is that, as President Bush and Defense Secretary Donald Rumsfeld have made abundantly clear, most of the fighting against the Taliban will be done not by U.S. troops thirsting for justice, but by the Northern Alliance and other tribal factions hungry for power.

Up to a point, this is understandable. No sane commander launches a frontal assault against a determined enemy in difficult terrain without adequate air cover and prior strikes on strongholds, supply lines and forward positions. But caution is not the same thing as avoiding danger altogether.

Special forces, so far as one can judge, will be in Afghanistan primarily to connect with allies and provide photo opportunities around the body of the captured or slain bin Laden. A token "battle" may be fought toward the end, once the enemy has been sufficiently pulverized by air power. There may even, if they judge their moment wrong, be casualties. But the bulk of hand-to-hand fighting (the nasty stuff) will be left to the "grunts" of the Northern Alliance, whose main specialty in the past was rape, pillage and murder.

Is there not something chilling about this scenario? What we are seeing -- not for the first time -- is an America that refuses to risk the lives of its own soldiers so long as there are others, locally recruited, lacking social security numbers, ready to die in their place. And the calculation -- cynical as a presidential veto -- has been a shrewd one. Afghans are dying every day: not just the Taliban, but men, women and children. Most of those who are not dead or fighting have fled to the hills.

Are these people's lives of no account? Is a simple apology for stray ordnance (accompanied by a food parcel) enough to justify military mistakes, allowing U.S. warplanes to move on and kill some more?

You don't have to be anti-American to voice such sentiments. You don't even have to be opposed to retaliatory strikes on Afghanistan. The Taliban is repellent. They gleefully harbored bin Laden and his associates. Following Sept. 11, they refused repeatedly to hand him over. They deserve their fate.

That is not the issue. What is at issue is Washington's unwillingness to rate U.S. citizens at the same human valuation they apply to others. As things stand, this is how it looks. It was outrageous of bin Laden and his al-Qaida terrorists to attack Americans on their own soil. It was a sin that cried out to heaven for vengeance. The president and just about everyone else vowed to track down the "evildoers" and show them the meaning of U.S. justice. "Dead or alive" was the universal demand.

And yet who is getting ready to take the Taliban on in their redoubts? Is it the much-vaunted U.S. Marines? Is it hardened American paratroopers? Is it G.I. Joe? I'm afraid not. That's for the comic books. The guys who are about to go into battle big-time for Old Glory will, in the main, be grizzled tribesmen, clutching aging kalashnikovs, who don't even speak English, let alone know the words to "God Bless America."

Britain declared Friday that U.K. Royal Marine commandos are ready right now to go in on the ground. Prime Minister Tony Blair, for all his religious and personal rectitude, appreciates the moral and symbolic importance of self-sacrifice. His press spokesman has even pointed out to journalists that the present conflict cannot be a "video" war.

The British are a martial nation, who in the 20th century lost millions of their soldiers' lives in the defense of freedom. They fought the slightly absurd Falklands war by sailing into danger and putting their soldiers at once in harm's way (not a phrase with much resonance in today's U.S. armed forces). In Bosnia, Kosovo and Sierra Leone, they won a reputation for standing up to bullies and going always to the heart of the action. It is not that they want to get killed, but rather that when they think of war they do not automatically reach for the remote control.

But Brits are not alone in their willingness to do battle. U.S. forces must be itching to do the very thing that they were trained for -- the engagement and destruction of their country's enemies. It is, after all, their raison d'être. If America does not wish to commit troops to battle, why does it boast the most powerful army on the planet? And why does every recent Hollywood production that deals in war ("Saving Private Ryan," "The Patriot," "Band of Brothers") focus on self-sacrifice and heroism? To risk all in the cause of freedom is a noble thing; to inflict all in the same cause is moral expediency.

We shall see what happens. Perhaps President Bush, in spite of all, will steel himself for the action that is sorely needed to redeem this enterprise. Yet we should not hold our breath. According to Secretary of Defense Rumsfeld, the Taliban are proving "formidable foes." Rumsfeld is not even certain that bin Laden will ever be found, let alone brought back in chains to Manhattan. It could be that he fears a land battle would be a waste of breath as well as of lives.

As the air war continues to intensify, questions are starting to rain down like cluster bombs. How brave has it been to bomb and strafe Afghanistan these past four weeks? How much risk was the Air Force and the Navy running? How dare America lecture al-Qaida and the Taliban on courage?

The officially stated view of the Pentagon was that the likelihood of a U.S. warplane being shot down in the present conflict was minimal. The Taliban, we were told, had little in the way of anti-aircraft defenses and, indeed, next to nothing by way of military targets. But that didn't stop U.S. aircraft from going in hard. From a distance so remote that to the Afghans they might as well have been in space, they pounded Kandahar and other cities, then labeled their enemy "cowards" for not lining up in the countryside to be blown away from the air.

Presumably it will be when armed resistance has finally withered away and the ordinary people of Afghanistan are scattered or else cowering in terror that American ground troops will enter the country in force. Then we will see the swagger.

Some victory. The "greatest generation" must be turning in their graves. It is shameful. No one wants their country's soldiers to die in war. War is a bloody business and it hurts. The fact is that America, to paraphrase Clausewitz, has found a way of pursuing war by other means ... so that it only hurts others.

Humanitarians cannot stand idly by. It is often said that justice, if it is to be done, must be seen to be done. Right now, justice is seen only on our television screens, relayed to our living rooms by satellite, along with the playoffs. We watch the dust rise up; we do not have to look at the suffering beneath.

This is not war in the heroic mold. It is a turkey shoot. President Bush must take his courage once more in his hands and say to the American people: "This is our fight, and, by God, it is our U.S. servicemen and women who are going to win it." Send the troops in now, while there is still an enemy in the field, and show the terrorists what America is made of. Or else head home and let both nations come to terms with their grief. Handing victory to the Northern Alliance and calling it justice, while the rest of us, including the military, watches on CNN, mocks the memory of the dead of Sept. 11.

Walter Ellis is a former editor and columnist at the London Sunday Times. He previously served as correspondent for the Financial Times and the Irish Times.