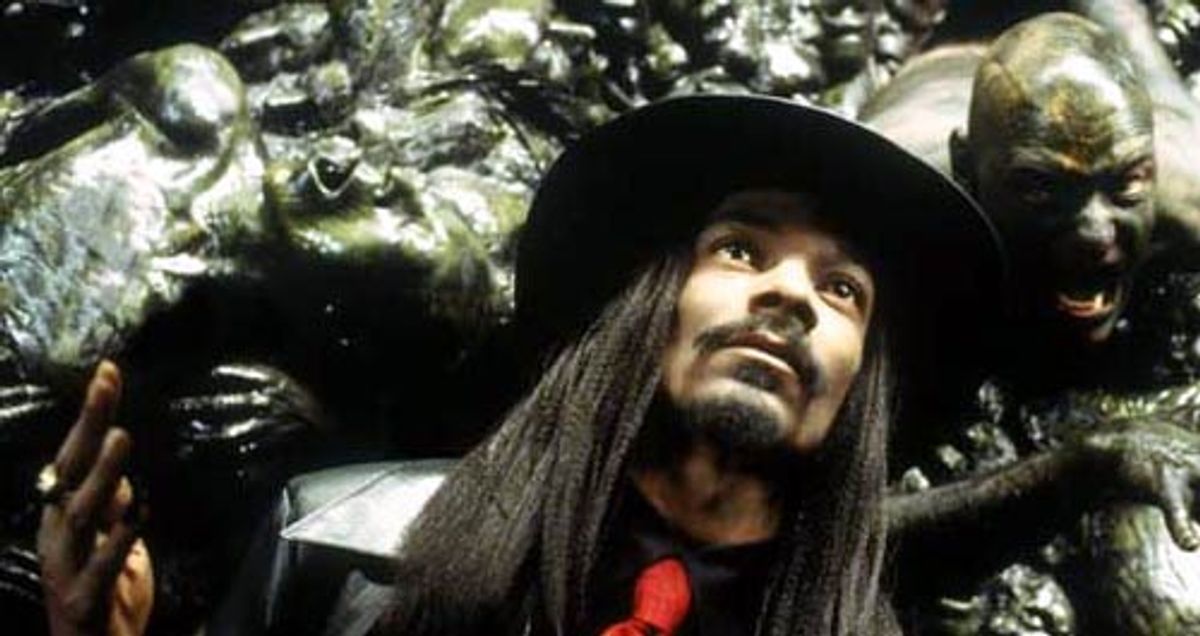 An inner-city horror spectacle with a convoluted plot and chronology and a large cast (many humans and many, many maggots, rivaling in this regard the finest work of Italian horror director Dario Argento), "Bones" is too jumbled to become the major pop hit it wants to be. But it's not an entirely bad film despite its lack of coherence. Horror aficionados and other midnight-movie fans shouldn't miss it.

Director Ernest Dickerson, the cinematographer for many of Spike Lee's early movies, has retained an eye for striking imagery even as his career has gotten mired in the swamp of cheapo exploitation film. And in the grand tradition of horror movies, "Bones" tackles social issues that more respectable screenplays would leave alone, including interracial marriage, middle-class buppies and what one character calls "ghetto paranoia" theories about the spread of crack. Then there's Snoop Dogg, in a Van Dyke beard, a Mona Lisa haircut and a succession of outrageous 1970s pimpin' outfits. (Apparently when you come back from the dead as a vengeful ghost, you get even badder clothes than you had when you were alive.)

Much of the plot of "Bones" involves a racially mixed group of suburban 20-somethings, headed by Patrick (the handsome if leaden Khalil Kain), who decide to buy a really scary looking abandoned house in the ghetto and turn it into a club to showcase their D.J. talents. A fine idea, of course. For all their street lingo, blunt smoking and Fubu clothes, they apparently have never seen a horror movie. They don't much care that legendary local gangster Jimmy Bones (Dogg) was apparently murdered in the house and buried in the basement. Nor do they notice when Pam Grier, playing a weather-beaten neighborhood psychic, stops by to warn them about the ravenous red-eyed dog they find living in Jimmy's former crib. "Some holes can't be filled and some hungers can't be satisfied," she intones. (Unfortunately, this is among the better moments of Adam Simon and Terry Metcalfe's screenplay.)

Grier's psychic, a buffoonish local criminal named Eddie Mack (Ricky Harris, in the film's standout comedy performance) and Patrick's upstanding dad (Clifton Powell) are all, it seems, implicated in what happened to Jimmy Bones lo these many years ago. Dickerson's finest visual moments come in his loving re-creation of African-American street life of the '70s; in these golden-haze flashbacks Jimmy Bones seems almost a benevolent figure, a feudal street lord who believed in fine women, fine cognac and protecting his people from an insidious new street drug called crack.

I don't know how much range Snoop has as an actor, but he's especially good here playing a godfather whose weakness lies in his very lack of ruthlessness as the grim new age of the '80s looms. Jimmy's murder -- by a black rival and a corrupt white cop -- is a bloody and upsetting scene that rises almost to the weighty and furious blood lust of Shakespeare or Greek tragedy. If the rest of "Bones" were anywhere near that level, this would be quite a movie.

Needless to say, when Jimmy comes back from the dead on the night Patrick's new club opens, he's not quite the kindly mack-daddy he used to be. Hearts are ripped out, severed heads are banished to Hell (still trying to negotiate with Jimmy as they go) and the formerly friendly pooch begins to vomit impressive spouts of maggots, as previously mentioned. Finally Patrick, Grier's psychic and her gorgeous daughter Cynthia (Bianca Lawson), who -- as is glaringly obvious from the start -- is also Jimmy's daughter, must pierce the membrane between the world of the living and the dead and do something or other to bring closure to this whole mess. Or not.

"Bones" reportedly had a troubled production history and has been extensively reedited since its first previews last spring. As much as I want to tell you that this is the hip-hop gangsta horror flick the world has been waiting for, it's really a grotesquely uneven schlockfest with large doses of bad writing and bad acting amid the delicious moments. Still, if you're the sort of person who views both "Superfly" and "Nightmare on Elm Street" as keystones of American cinema, you don't need me to convince you that Snoop and Grier is a pairing you can't pass up. And you don't need an answer to the rhetorical question asked by Eddie Mack's severed head, after Jimmy Bones claims it: "Man, why you got to get all meta-fucking-physical on me?"