"Rushmore" meets "American Beauty" meets "Back to the Future" in this spectral, funny, amazing first film from writer-director Richard Kelly. 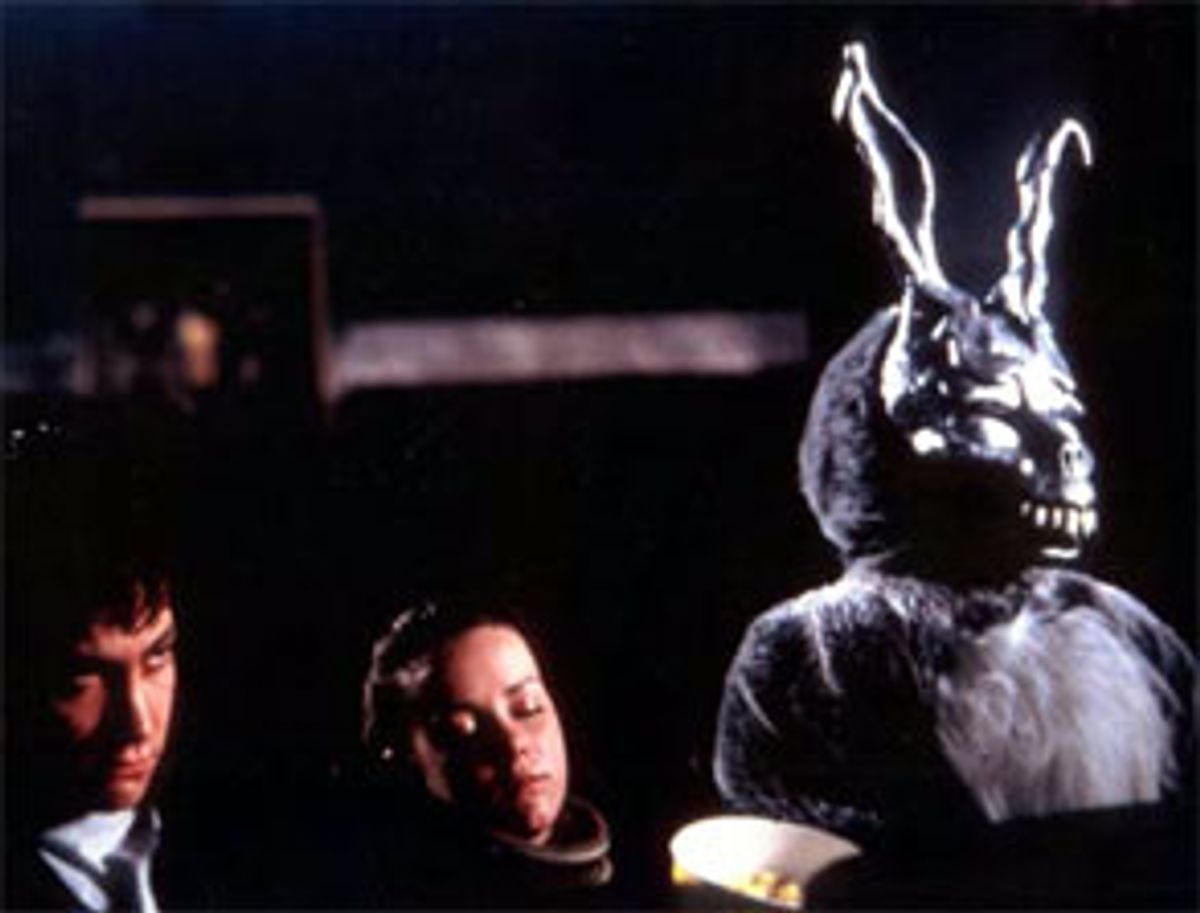 Those of you who, like me, suspect that the world is coming to an end will have to reassess your views after seeing "Donnie Darko," the remarkable debut film of writer-director Richard Kelly: The world actually ended already, in 1988. The more I think about this the more sense it makes; all the tawdry and ridiculous and tragic events of our public and private lives since then are just epiphenomena, clouds of cosmic dust, the shared dreams of our dying consciousness as we lie amid the rubble of so-called civilization. It's a strangely comforting and half-convincing vision, and almost the only thing I don't like about it is that the soundtrack to Kelly' s apocalypse comes courtesy of Tears for Fears and Echo and the Bunnymen, whose songs are now egregiously stuck in my head. You have been warned.

Actually, I'm oversimplifying quite a bit. Although "Donnie Darko" is, among many other things, a movie about tragedy and loss, about a boy fighting a losing battle against madness and darkness, Kelly is much more of an optimist about human life than that suggests. According to this thrilling and peculiar tale of psychosis, time travel and teen romance, the world ended in 1988, but only provisionally or temporarily. So we're stuck with the world we have, whose current deranged condition seems uncannily connected to the disturbing, through-the-looking-glass vision of this film, one of the most original works of recent American cinema.

"Donnie Darko" is a stunning technical accomplishment that virtually bursts with noise, ideas and references, but it's fundamentally a gracefully crafted movie that's about human beings and not images. At its heart is a portrait of an American family -- damaged, yes, but no worse than most -- colored more by compassion and love than cynicism. Kelly himself has suggested that "Donnie Darko" is the story of Holden Caulfield filtered through the paranoid sci-fi consciousness of Philip K. Dick, but frankly he's selling himself short; whatever its flaws, this movie is more soulful and less self-absorbed than those sources might suggest.

On one level, "Donnie Darko" is one of American cinema's oft-told tales, the one about the high school outsider who finds some version of love and acceptance on the fringes of a conformist community. Donnie (Jake Gyllenhaal) is a sleepy-eyed, charismatic teenager with arson in his past, pills and therapy in his present, and something frightening and unknown in his future. Or so says the demonic figure that speaks to him at night, a man-sized insect-rabbit who warns him that only weeks remain before the world will end, on Oct. 30, 1988.

His college-bound sister Elizabeth (Gyllenhaal's real-life sister, Maggie Gyllenhaal) has announced her intention to vote for Michael Dukakis, partly to irritate their conservative parents (Mary McDonnell and Holmes Osborne). His younger sister, Samantha (Daveigh Chase), is a member of a preteen dance troupe called Sparkle Motion, presided over by Ms. Farmer (Beth Grant), a hypercontrolled hysteric in the mode of JonBenet's mom. The satire here is a little broad, but Kelly's tonal control is marvelously modulated throughout, and Sparkle Motion's dance routine, when we finally see it, is part of a masterful montage, both comic and moving.

As ominous as Donnie's spectral bunny friend may be, it seems to save his life by luring him out of bed on a night when the Darko family house is partially destroyed by a mysterious calamity. (I'd better not tell you exactly what happens.) Even as Donnie meets Gretchen (Jena Malone), a girl with an equally damaged past whose diffidence can't hide the intensity of her feelings for him, his imaginary companion pushes him into increasingly destructive behavior. Donnie also starts to believe that he can see a brief distance into the future, in the form of ectoplasmic shapes emerging from people's chests (including his own) that indicate what they're about to do.

Many of the elements here are those of a mid-'80s John Hughes movie, or for that matter of the "Back to the Future" films, an influence that Kelly specifically acknowledges in a conversation between Donnie and his science teacher (a fine if brief role for Noah Wyle of TV's "ER"). Somewhat in the manner of Darren Aronofsky (in "Pi" and "Requiem for a Dream") or Wes Anderson ("Rushmore"), Kelly takes these elements of pop storytelling and stretches them into something transcendent, personal and deeply strange.

When "Donnie Darko" echoes or quotes scenes from "Nightmare on Elm Street" or "The Abyss," I don't think it's a film-school homage but rather a recognition that those images have overflowed their containers and now inhabit the general Jungian subcellar. Kelly's blend of satire, period piece and tragic love story is itself a kind of cultural archetype that extends from "American Beauty" and "The Virgin Suicides" back to "Peggy Sue Got Married" and well beyond. But few filmmakers of any era have blended the sensibilities of pop and art film so effortlessly, or combined them with such a haunting tale of loss and redemption.

Donnie is angry and alienated, but he's no self-centered nihilist. He loves his girlfriend and his family, and his struggle with the rabbit-demon named Frank (a sinister counterpart to Jimmy Stewart's companion in "Harvey," perhaps), like his explorations of the philosophical implications of time travel, are devoted to finding a moral and metaphysical purpose in the universe. (Although religion is hardly mentioned in "Donnie Darko," he attends a Catholic high school, and theology is never far below the surface.) In Kelly's universe, even the most dreadful questions -- does every living creature die alone? -- are subject to a wonderful reshaping.

Kelly handles his ensemble cast with a sensitivity you can't learn in film school. Although the entire movie revolves around Jake Gyllenhaal's memorable performance, the supporting actors, who range from the 16-year-old Malone to Drew Barrymore (also the film's executive producer) as a sympathetic schoolteacher to veteran actress Katharine Ross (onetime costar of "The Graduate" and "Butch Cassidy and the Sundance Kid") as Donnie's therapist, are just as good. (Patrick Swayze is enjoyable as a slimeball self-help guru, but his entire subplot is too clever and self-aware by half.) Special mention must be made of McDonnell, who turns that most treacherous of all female roles, the suburban mom, into the film's moral and emotional anchor in a performance of understated intensity.

Kelly is just 26, but while "Donnie Darko" is a young man's film in its brashness and daring (and its slightly overthickened satire), it's not a movie by a kid. Kelly isn't ashamed of his film-wonk influences: At a crucial juncture in the story, Donnie and Gretchen go to see a double bill: "The Evil Dead" and "The Last Temptation of Christ." (When Gretchen falls asleep and Frank appears, Donnie asks him: "Why are you wearing that stupid bunny suit?" Frank's response is chilling: "Why are you wearing that stupid man suit? Take it off.") Amid all the other film references careening through this movie, these two are not accidental. "Donnie Darko" has the pulse-pounding narrative suspense of the first and the moral seriousness of the second. It marks the beginning of what ought to be an amazing career.