After 11 days of siege, the Israelis have left behind ruins and broken families in the Palestinian city. 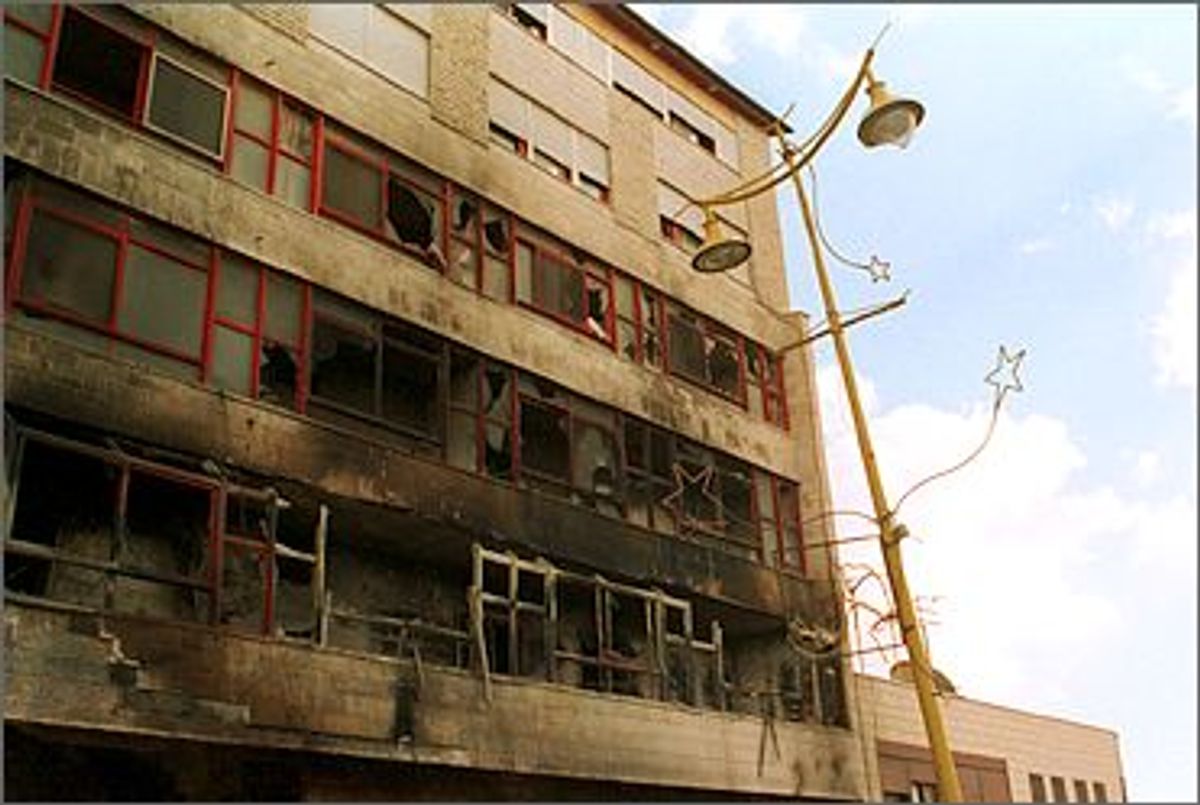 On a small brown desk right on the sidewalk of Manger Street, Walid Abu Snour has laid out dollar bills and other currencies in neat stacks held down with pebbles and rocks. Israeli bulldozers completely tore down his money changing office, which until a few days ago was located just a few yards behind. Its mangled metal shutters lie on the ground next to concrete blocks, part of the rubble from a strip of shops systematically destroyed by the Israeli army during 11 days of unprecedented fighting in Bethlehem earlier this month.

"Sharon has taken me back 2,000 years. I'm in the Stone Age now!" jokes Abu Snour. "I believe they destroyed my shop just to break my will, but you see, I'm still here."

When the last tank had vanished north in the direction of Jerusalem, Bethlehem residents came out of their homes for the first time in days. Children went back to school, women went shopping; others simply milled around in a daze, gawking at the damage done by 11 days of siege. More than 20 people from the Bethlehem area were killed, including at least seven noncombatants -- a heavy count for a sleepy town used to Christmas carols and busloads of happy tourists. But long after the funerals, the atmosphere in Bethlehem will remain poisoned by the memory of the recent Israeli military raid.

Elderly Bethlemites say last week's fighting was the most serious they can remember and that nothing has ever matched this level of destruction, not even the 1948 and 1967 wars. The reminders of mayhem are everywhere: A tall shopping center and a hotel are now charcoal-black eyesores. The elegant, white-stone facades of Bethlehem University and the hospital of the Holy Family are thoroughly pockmarked. A dozen houses torched by missiles or gutted by tank fire spill their wrecked furniture onto the Bethlehem sidewalks.

Years from now, observant tourists may be able to detect the traces of bullets on several buildings on Manger Square: one crashed through the windows of the Church of St Catherine's, the Catholic annex to the Church of the Nativity that Christians traditionally associate with the spot where Jesus was born.

"When you see the ruins here you should expect three times more ruins on the Israeli side. It's in the nature of things," says Hisham Ahmed, a refugee and a professor of political science sitting next to his friend Abu Snour, the roofless money changer. By brutally reoccupying Bethlehem, "Sharon has rendered Israel more vulnerable and under threat than ever before."

On the day after the storm, the look on the faces of many Bethlemites is one of steely determination. Not strident rage, just calm anger. The anger is particularly chilling in silent young men whose faces look so similar to those of dead Palestinians -- some innocent, some not -- already plastered on posters or stenciled on the walls.

"With trust in God, we'll overcome this," says Ibrahim al-Atrash, a member of the family who owns the Paradise Hotel, a six-story building that was taken over by the Israeli army and ravaged by fire. Stepping over blackened bedcovers in sooty corridors, he says his family spent more than a million dollars in renovations in 1999 to accommodate a wave of millennium tourists and pilgrims that never came. When the Intifada started last fall, Hotel Paradise, like other hotels, was closed for lack of business.

Its doors were closed for 13 months until an Israeli tank crashed its way through the back gate two weeks ago and soldiers took over double bedrooms with street views and clear sniping access to al-Azzah refugee camp, a pocket-size warren of narrow alleys and cinderblock houses that's home to 2,300 refugees.

"For sure, we're going to rename it Hell Hotel," says al-Atrash. But it is not the physical wreckage that worries him most; it is the appetite for revenge that wanton destruction will sow in future generations of Palestinians.

"I'm a peace man," he says. "I want us to live in two countries, Israel and Palestine, in peace. But Israel is destroying any chance of peace between our people and the future of our relationship. If students of Bethlehem University go to school and see their university destroyed, how can peace happen in this world? The people of al-Azzah camp already lost everything in 1948 [when Palestinians were forced out of their villages during Israel's War of Independence]. Now they have lost everything anew. Will they forget everything so soon?"

The Israeli incursion into Bethlehem started the day after the assassination of Israeli Tourism Minister Rechavam Zeevi. It was part of a campaign launched in several Palestinian-controlled cities of the West Bank to punish the Palestinian Authority for harboring terrorists and arrest or kill Palestinian suspects.

But it also followed a familiar pattern of more localized tit-for-tat violence. On Oct. 18, the day after Zeevi was gunned down by radical Palestinians, Israeli security services are believed to have killed Atef Abayat, a Palestinian gunman wanted by Israel for several attacks, by detonating a bomb in his brand-new jeep. The Abayat clan responded by opening fire on Gilo, a Jewish neighborhood just south of Jerusalem built on war-won land. Israeli tanks moved in, allegedly to stop the shooting, but in fact escalating the conflict into a full-scale urban war.

Witnesses say the Paradise Hotel was set on fire by Molotov cocktails thrown by Palestinians trying to flush out the Israeli snipers holed up there. Rows of shops and houses on Manger Street were smashed by an Israeli bulldozer after Palestinians from the nearby al-Azzah camp managed to stop an Israeli armored vehicle in its tracks with a pipe bomb. "It was just anger. They couldn't stand us defending our camp," says Kamal Qaisi, the owner of a small restaurant damaged by the bulldozer.

All over the alleys of al-Azzah camp where three people were killed last week, the mustachioed face of a deaf nurse, shot dead when he stuck his head out the window at the wrong time, hangs next to portraits of two bona fide gunmen who were shot in combat. In addition to the omnipresent posters, the bloodied hands of one of the fighters were pressed against the concrete wall of the house in which he was hiding so that passersby wouldn't forget his death.

Not surprisingly, the cult of death isn't to everybody's liking, and some families want out. A year of shooting, military sieges and anarchy in and around Bethlehem has taken its toll on residents, and a quiet exodus is under way.

"All I want is to get out of here as quickly as possible," says Linda Awad, a resident of Beit Jala, a predominantly Christian town adjacent to Bethlehem, which has also been subjected to shooting and a crippling siege.

"Life is not good," says a glum Jibril Mitausi, the owner of a hair salon near the entrance of Bethlehem. In January, Mitausi moved out of his house in Beit Jala, on the confrontation line between Palestinian snipers and Israeli tanks stationed across a narrow valley in the Jewish neighborhood of Gilo. Having had his fill of Israeli gunfire and artillery punching its way through the living room and kitchen windows, scarring the walls and terrifying his 2-year-old daughter Sarah, he decided to leave. He sold the furniture he had bought as a newlywed (at a quarter of its original price), and packed his family into a one-bedroom apartment in the center of Bethlehem, a neighborhood that was deemed safe at the time but turned into a battlefield when Israeli troops moved in two weeks ago.

"It has doubled my desire to leave," says Mitausi, 34, referring to the latest Israeli raid.

Mitausi's business is down by 45 percent: Many of his customers have already left the country and those who stay are too impoverished to tend to their curls. But, he says, "the problem is not the money. It's how you can live here and see all this." He is chiefly concerned about his daughter who sleeps fitfully and dreams of bombs at night.

Mitausi is waiting for the end of the school year so that his wife, a teacher, can collect her pension. They will probably join Mitausi's father who owns a 25-chair hair salon in North Hillwood, Calif. He knows life will be difficult there too: People have been reluctant to come to his father's Arab-run business since Sept. 11, he says, and a relative was forced off a flight between Miami and Los Angeles recently because of his complexion. But he believes the suspicion toward Arabs will pass. "Everybody is angry in the U.S. now. They need a bit of time to forget."

Single mother Awad is even more desperate to leave. Abandoned 10 years ago by her husband during the first Intifada ("because of the difficult life and poverty," she says), she lived for her children, putting food on the table thanks to the help of her brothers and sisters. Her luck turned when she was hired as a card-dealer and her son became a waiter at a new casino built in Jericho, near the Dead Sea. But when peace collapsed last fall and the casino, shelled by Israeli tanks, closed down, her newly comfortable world suddenly came crashing down.

Janet, 25, Awad's oldest daughter, was the first to go. She flew to Florida three months ago on a tourist visa with her husband, whose family restaurant, a Bethlehem institution called Dollars, folded because of the lack of tourism. They said they would try to legalize their situation and stay in the United States unless the situation in the Palestinian territories improved.

"It still feels like a nightmare," says Awad, remembering the day her daughter announced her departure. "Just when my life was getting better, with the casino, the good furniture, everything fell apart. It felt like a rosary losing all its beads."

Then came her son Khader, 23, who lost all sense of purpose when he became jobless last October. "He had no more money, nothing to do. He would stay inside sometimes for two weeks without going out. He would sit on the balcony, crying in the dark. I can't forget that," Awad recollects. "For 10 years he was the man here, helping his mother. But in one moment he lost everything and became useless, as if his hands were broken."

When Khader insisted on leaving for Peru where some of Awad's cousins already live, she could not stop him. She sold a bed set, a closet, the family oven, a heater and a television to buy his plane ticket. "I let him go because I saw no way out of the crisis," says Awad, sitting on a plastic chair in her empty apartment.

Now Awad and her remaining daughter, Samia, 20, are counting days and dollars. They have just enough money to buy tickets for Peru where they intend to follow Khader, but not enough pocket money to make a new start there. So they wait for a miraculous financial breakthrough, with clothes, family pictures and religious icons packed into a small corner of their flat, slowly dipping into their savings to survive.

Mother and daughter pace the empty rooms like caged animals because the streets are too dangerous. Even when Israeli troops are out of sight, armed Palestinian militiamen roam the streets, spreading a feeling of unease and lawlessness.

Samia, who used to work in a souvenir shop, and now has the permanent pout of a housebound teenager, summed up her feelings: "We used to go out, have ice cream, eat in restaurants. Now everyone is home by sunset. There's nowhere to go. I don't like leaving," she says, "but I have no life."