The wacked-out singer has a Halloween special that's a fright, but not the way he intended. Plus: Emeril loses 10 pounds of scary fat and, on MTV, a crazed fan is allowed to run amok, Mandy Moore style. 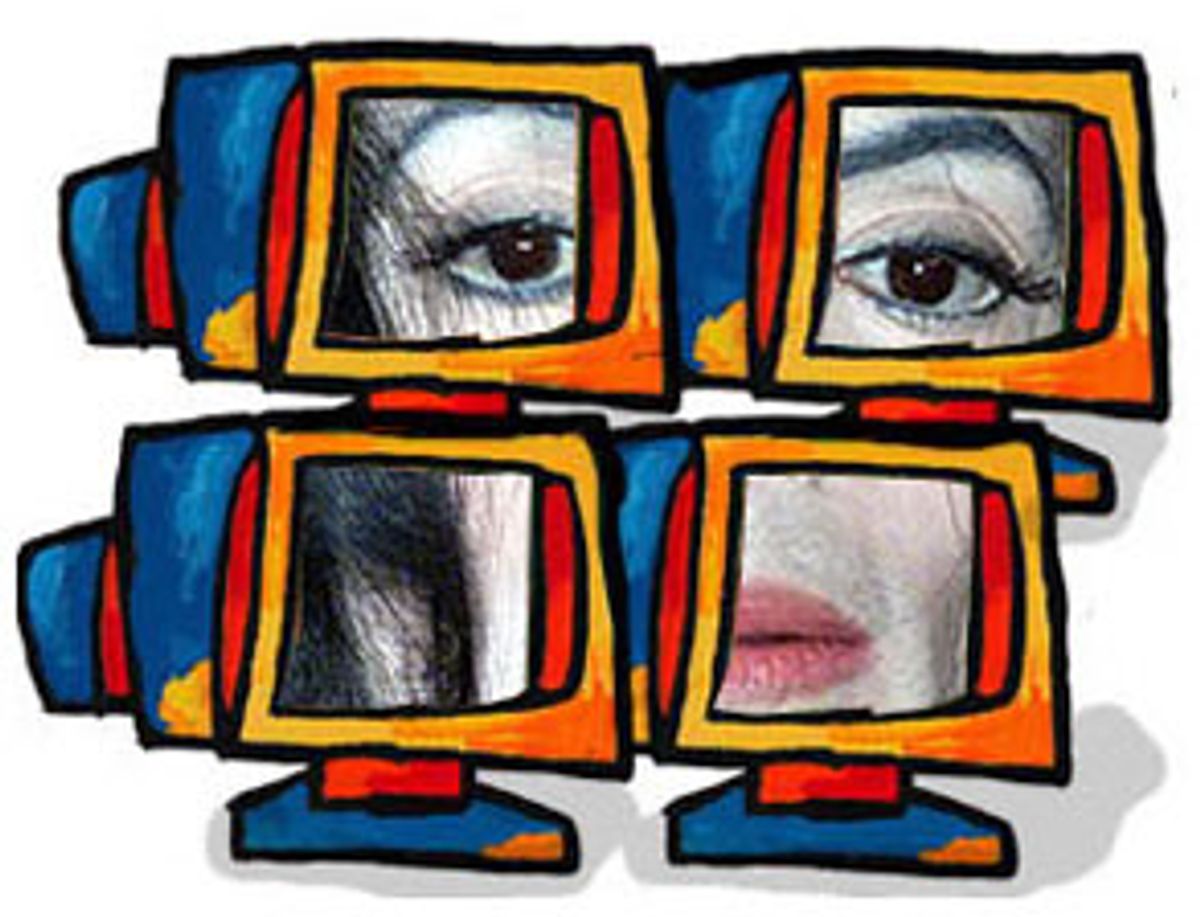 You know Halloween is here when all around you is Michael Jackson.

First there was his silent surprise appearance on the MTV Music Awards, followed by the "Michael Jackson 30th Anniversary Celebration: The Solo Years," a two-night tribute he threw for himself at Madison Square Garden early in September. (The pared-down version is now scheduled to air on CBS Tuesday, Nov. 13.)

The self-homage featured all Jackson's scary friends acting scarier than usual. Marlon Brando regaled the audience with gruesome stories of little foreign children meeting grisly, untimely deaths. "Sick children -- that's what this evening's all about," he declared, as if there could have been any doubt.

Jacko's posse is packed with former child-stars who feel his pain. Little boy wrecked Macauley Culkin came out for it, as did Liza Minnelli, looking bloated and greenish. Whitney Houston was there as a skeleton. And for a touch of that where-are-they-now mystery, "50 Legendary Ladies of the Silver Screen," including proto kinder-star Margaret O'Brien, provided emotional support for the aging, noseless and reportedly financially strapped former "King of Pop."

Where other stars have colleagues, peers and admirers, Jacko seems to have fellow survivors and tacit character witnesses. His friends say it all without saying anything: You want scary? Get really famous, really young. You want really scary? Wait seven years to produce an album, and then spend $30 million making it. And just to make sure everyone's primed and ready for the release of the modestly titled "Invincible" this week, endless Jacko videos on MTV and VH1 were punctuated by repeated showings of his Halloween special, "Michael Jackson's Ghosts."

If you really want to know what it feels like to be Michael Jackson but you still aren't clear on the sensation, why not hunker down in front of this 38-minute horror/musical directed by Oscar-hogging creature creator Stan Winston? The screenplay, originally written for Jackson by Stephen King in 1993, was temporarily shelved soon afterward (Boy, sleepover, allegations, shit-storm, etc.) and eventually rewritten. A full 15 minutes of material was cut, but still the resulting piece would make a decent NAMBLA commercial.

In it, Michael Jackson is a well meaning but (apparently psychotically sensitive) "loner" who likes to scare adorable little neighbor-boys with ghost stories. He is suddenly thrust into an AYSO referee's worst nightmare when a mob of angry suburban parents led by the mayor of "Normal Valley" accost him in his creepy hilltop home, "Somewhere Else." As the torch-wielding PTA approaches castle, a little boy pleads, "Can't we go? He hasn't hurt anybody!"

If Michael had a nose, we'd say this was right on it. "There's no place in this town for weirdos," declares the mayor, busting through the gate. (Jackson, with the help of some makeup wizards, plays a lot of the parts himself, and overacts accordingly.) Inside, the mob is met by a cloaked figure wearing a skeleton mask who at first elicits gasps then, inexplicably, sighs of relief when he reveals his face -- along with a rather striking lack of self-awareness.

But such is Jackson's Weltanschauung. Parents accuse him of corrupting their children ("See what you've done?" one woman says, "Young people are impressionable!") and threaten violence ("We'll get rough with you if we have to!") while the children themselves respond with the kind of glee child actors usually reserve for pizza commercials. More cheese!

What follows is the bizarre experience of watching Michael Jackson take the group hostage so that he can terrify them into loving him.

"Are you scared yet?" he asks, pulling a funny face.

"Are you scared yet?" he asks again, pulling his face right off.

Women start to cry and make for the door. Michael replies that it's too late for them to go anywhere, as they are now his "guests." He unleashes a troupe of exhumed Viennese courtesans (These ghosts can dance!) on the nervous crowd.

There's nothing like freaking people out to get them to like you. Of course, as the token straight, white, evil guy, the mayor is the only villager not eventually won over. ("Are you the ghost of jealousy?" Michael trills to himself, getting, perhaps, to the heart of the matter.) The little boys respond with awed expressions of ineffable, Spielbergian joy of the kind that only highly stylized entertainment product can bring. We can tell by the silent "whoas" on their lips and the way their hair is blown back from the sheer power of the magic of Michael that Michael is all about love and peace and monkeys until concerned citizens try to cross him.

Then watch out, straight white man. He will pour himself inside your mouth and make you grab your crotch and thrust your pelvis in front of all the den mothers. He will lead to your eventual suicide by defenestration. Don't mess with him.

"Emeril," the sitcom, won't be with us much longer (NBC is putting the show about another show on hiatus for November sweeps), but what better way to send it off than to devote an episode to Robert Urich talking the surly chef into an appointment with an extra-slender canulla? Yes, liposuction. Twenty pounds worth.

"Everyone in Hollywood does it!" Urich says by way of encouragement. (Up next, on "Three Sisters": Will Dyan Cannon's lips finally burst?)

What's so funny about liposuction, you ask? Major trauma! It really hurts when the pain pills wear off! And the doctor draws all over you with a black magic marker! You could even bleed to death! So remember: Don't hoover your love handles on Halloween. Your drunken colleagues might just come over and tell you ghost stories, and you just might split your sides.

Tonight I watched my very first episode of "Becoming." The premise of the show is that a young girl or boy -- if he or she wants it bad enough -- can "become" their favorite recording artist by having MTV show up on their doorstep, give them a makeover and tape them aping and lip-synching their way through said recording artist's most recent video.

The MTV crew knocks on the door of a girl named Katie Chatsworth, a junior from Canoga Park, Calif., who will be magically transformed from a curly-haired girl in a tank top to a straight-haired teen in a tank top with a push-up bra.

It's that easy, kids! Go ahead and skip high school!

Katie says goodbye to her pony, gets in a limo and is whisked away to Beverly Hills.

After having her hair ("I'm nice and blond now") and makeup ("I can't believe he touched her face and now he's touching mine!") done, Katie is taken to meet the choreographer who will teach her to move just like Mandy Moore in what appears to be a single afternoon. ("Congratulations on becoming Mandy Moore!" the choreographer says.)

Then it's time for a pedicure.

"Getting my hair done and my nails done gives me more of an idea of how Mandy Moore lives," says Katie, who might have gained greater insight and perhaps a more important life lesson had she been treated to a few days with a shrewish stage-mother, an oily manager, a few execs with the music industry version of the casting couch -- and a crazed stalker, a scary fan like herself.