Airport security up in the air

House Republicans delay vote on bill, but will they keep airport security from being federalized despite the public's strong support? 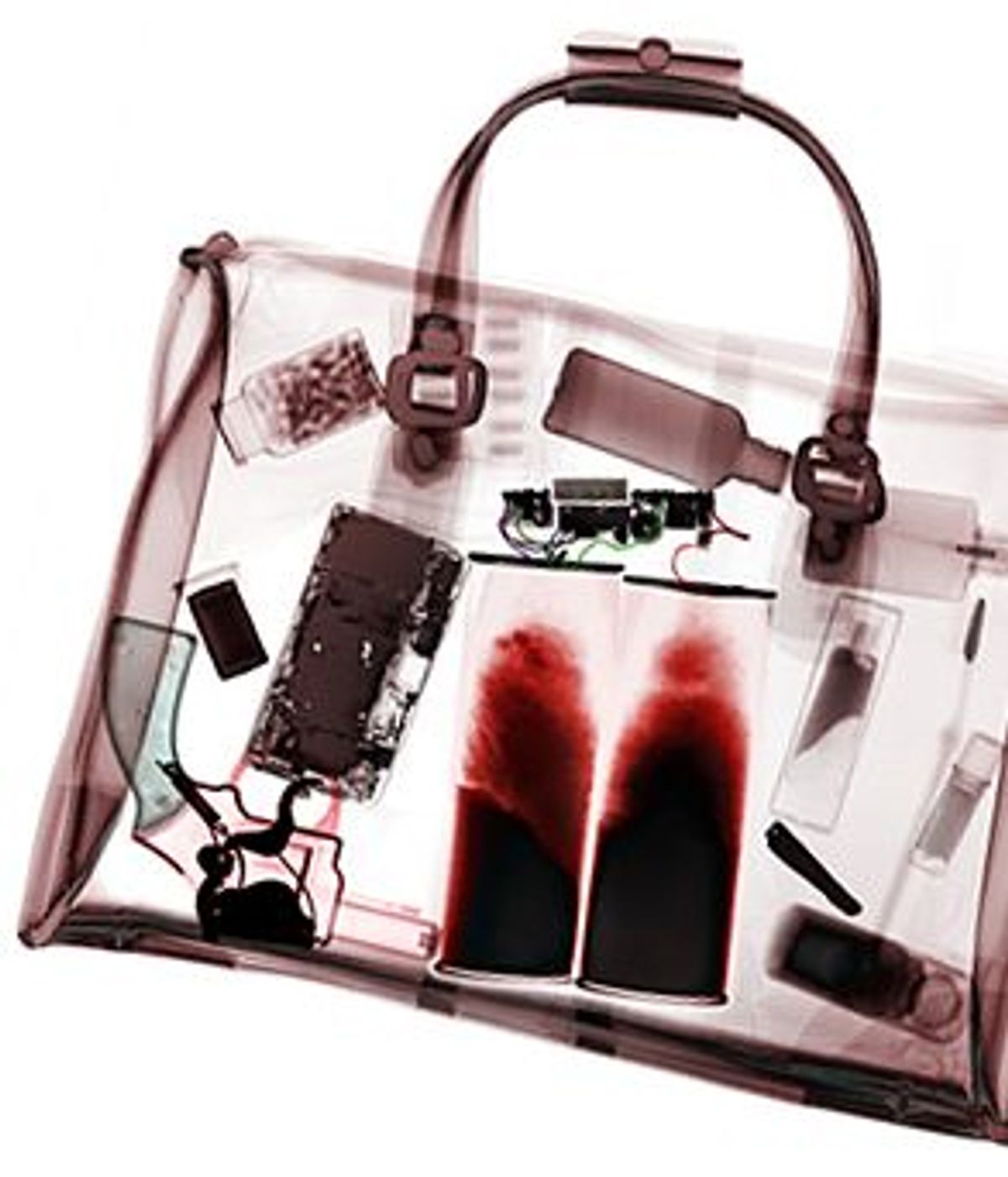 Around that time, another man -- a schoolteacher, not a terrorist, thank goodness -- boarded a flight from Sacramento, Calif., to Ontario, Calif., according to the Sacramento Bee. He didn't realize until landing that he had accidentally brought a 5-inch, serrated steak knife with him onto the flight, in his carry-on bag, fit snugly beneath his seat.

And last Tuesday, a Mississippi man unwittingly carried his briefcase -- and the loaded gun stowed inside it -- through security at the New Orleans airport and onto a Southwest Airlines flight for Phoenix. Realizing his error midflight, the man alerted a flight attendant. A spokesman for International Total Services, the private company that provides security for the airport, later said that the firearm might have avoided notice because it was so small.

Despite continued incidents such as these, the House GOP leadership on Monday -- the seven-week anniversary of the last day of the old world -- further delayed a vote on an airport security bill until Thursday at the earliest, when presumably they'll be able to muster support for their version of the bill. It's the latest indication that GOP leaders are struggling to garner enough opposition to federalizing the airport security workforce, and support for their own bill, in which security personnel would be supervised by the government, but privately contracted.

"We're winning, that's what that means," said Rep. Rob Andrews, D-N.J., the chief Democratic House proponent of the move to fully federalize the airport security workforce, when informed that the GOP leadership had pushed back the scheduled Wednesday vote on his bill.

It had a strong, familiar whiff of the partisan House GOP politics of earlier in the year. House Speaker Dennis Hastert, R-Ill., has shown himself perfectly willing to force his will against a majority of the members -- almost all the Democrats, and a small but significant lump of GOP moderates -- who disagree with him. After the Senate passed the campaign finance reform bill, Hastert proposed bringing the bill up with a series of amendment hurdles that bill supporters thought would have been impossible to meet. When a majority of the House defeated his proposed amendment process, Hastert just removed the matter from the legislative docket altogether and blamed it on his opponents. After the Senate passed the patients' bill of rights, Hastert delayed a scheduled vote until President Bush had managed to convince one of the opposing bill's sponsors to double-cross his former legislative partners.

For weeks now, the White House and congressional Republicans have been losing the fight over this bill -- supported by most Democrats and a significant swath of moderate Republicans -- that would make airport security personnel federal employees. Though Hastert's office confirmed that the matter was no longer going to come to a vote on Wednesday, as of Monday afternoon the office of Minority Leader Dick Gephardt, D-Mo., had yet to be informed of the scheduling change.

"We haven't heard that from them yet," said Gephardt spokesman Erik Smith. "But if they do that, it just tells me that they don't have the votes. It's pretty determinative that they'll lose. We'll get all but a handful of Democrats and the 14-15 Republican co-sponsors." Republicans currently hold a six-vote majority in the House. A spokesman for Majority Whip Rep. Tom DeLay, R-Texas, did not return a call for comment.

John Feehery, a spokesman for Hastert, downplayed the rescheduling, saying that some House members planned to attend the funeral for former Rep. Gerald Solomon, R-N.Y., and that there were other legislative matters that might need attending to before the airport security measure. Feehery did allow that, with members returning to Washington on Tuesday afternoon, there might not be enough time for DeLay, an ardent opponent of the federalization move, to work his particular brand of persuasion for his bill. "When the first votes are Tuesday after 6 p.m., we probably won't have enough time to get together and start the whipping process" for a Wednesday vote, Feehery said.

Polls indicate overwhelming public support for a full federalization of airport security workers, and on Oct. 11, the U.S. Senate passed the bill, offered by Sens. Ernest Hollings, D-S.C., and John McCain, R-Ariz., by a 100-0 vote. GOP House leaders promised that the bill would be on "a slow track" as it made its way through their chamber, as Feehery put it at the time, while they marshaled opposition to the Hollings-McCain bill. In the House, Andrews and Rep. Greg Ganske, R-Iowa, are introducing the federalization bill in the precise amended form in which it passed the Senate so as to get the bill to the desk of President Bush as soon as possible.

Both the Ganske-Andrews bill and the version favored by the House GOP leadership, offered by Rep. Don Young, R-Alaska, chairman of the House Transportation and Infrastructure Committee, would install armed federal air marshals and require a host of new security measures in airports. But Ganske-Andrews would require that all airport security personnel be federal employees, and would place airport security under the auspices of the Justice Department. The Young bill allows for private contractors with federal supervision, and has the process supervised by the Department of Transportation.

"You have to ultimately hold someone accountable," Andrews says. "If someone just signs a contract for airport security and hires someone to do it and they screw up, they're not accountable."

On Oct. 25, DeLay countered this, arguing that federalization "was tried and it failed all across Europe. At least 15 countries have now rejected nationalization and the approach taken by this Senate bill. . . . Public-private partnerships in Europe drove airline terrorism down from 21 hijackings in the 1970s to just 4 in the 1990s. The president's plan is built on Europe's experience."

But such Europhilia doesn't impress everyone. Ganske recently referred to the three biggest airport screening corporations in the U.S. -- Argenbright Security, Huntleigh and Globe Aviation Services, which are all European -- as "derelict foreign corporations ... endangering American lives." Just a few days ago, Argenbright, which had previously been fined $1.2 million for hiring convicted felons to screen passengers, was caught hiring screeners at Philadelphia International Airport without conducting criminal background checks.

It's tough to find a politician who doesn't agree that airport security is a lax joke. Two years ago, the inspector general of the Department of Transportation sent agents to breach security at eight airports. They made 173 attempts. They succeeded in 117 of them.

House Republican leaders, meanwhile, have portrayed the move to federalize the 28,000-person airport security workforce as a power grab. "What the Democrats want is 30,000 new dues-paying contributors," Majority Leader Rep. Dick Armey, R-Texas, told the National Journal. "That's what they want. It should be transparent."

Bush has similarly voiced opposition to federalization. In his weekly radio address on Saturday, Bush declared his support for the Young bill, which he said "allows the use of private contractors, operating under tough federal standards on background checks with law enforcement at every gate." He said that by hiring private contractors, "security managers can move aggressively to discipline or fire employees who fail to live up to the rigorous new standards" -- implying that such would not be the case with a federal workforce.

And at the behest of GOP leaders, Bush briefly considered signing their preferred version of the bill into law by executive order, but he decided against that idea. Last week, Transportation Secretary Norm Mineta made it clear that Bush's opposition was only so deep, and that he wasn't going to do the dirty work of vetoing whatever airport security measure made it to his desk. "I don't think the president is going to be put in the position of having to veto an aviation security bill," Mineta said at a press conference. "I think the responsibility lies with the House and Senate members."

And on the Sunday chat shows, White House chief of staff Andrew Card reiterated this message. "I suspect that he [Bush] wouldn't want to have to sign it, but he would," Card told NBC's Tim Russert. Republican co-sponsors of the Ganske-Andrews bill include Reps. Christopher Shays, R-Conn., Fred Upton, R-Mich., and Tom Davis, R-Va., chairman of the National Republican Campaign Committee.

"You know, most issues are very abstruse and very dense and you can make black look like white and white look like black," said Andrews. "When it's the patients' bill of rights or the tax cut you can posture things all you want. But people really understand this. This is very obvious to people. They're concerned about getting on airplanes. And it passed the Senate 100-0 -- Hillary Clinton and Strom Thumond, Paul Wellstone and Trent Lott, all of them voting side-by-side. But we won't even put it up for a vote. I think anyone getting caught playing games with this does so at his own peril."

Or someone's peril, at any rate. After all, on Oct. 14, al-Qaida spokesman Suleiman Abu Ghaith warned American and British Muslims to avoid airplanes and high-rises. "The storm of airplanes will not be calmed, if it is God's will," he said.