Crawford and Jackie Cooper did more than play badminton. 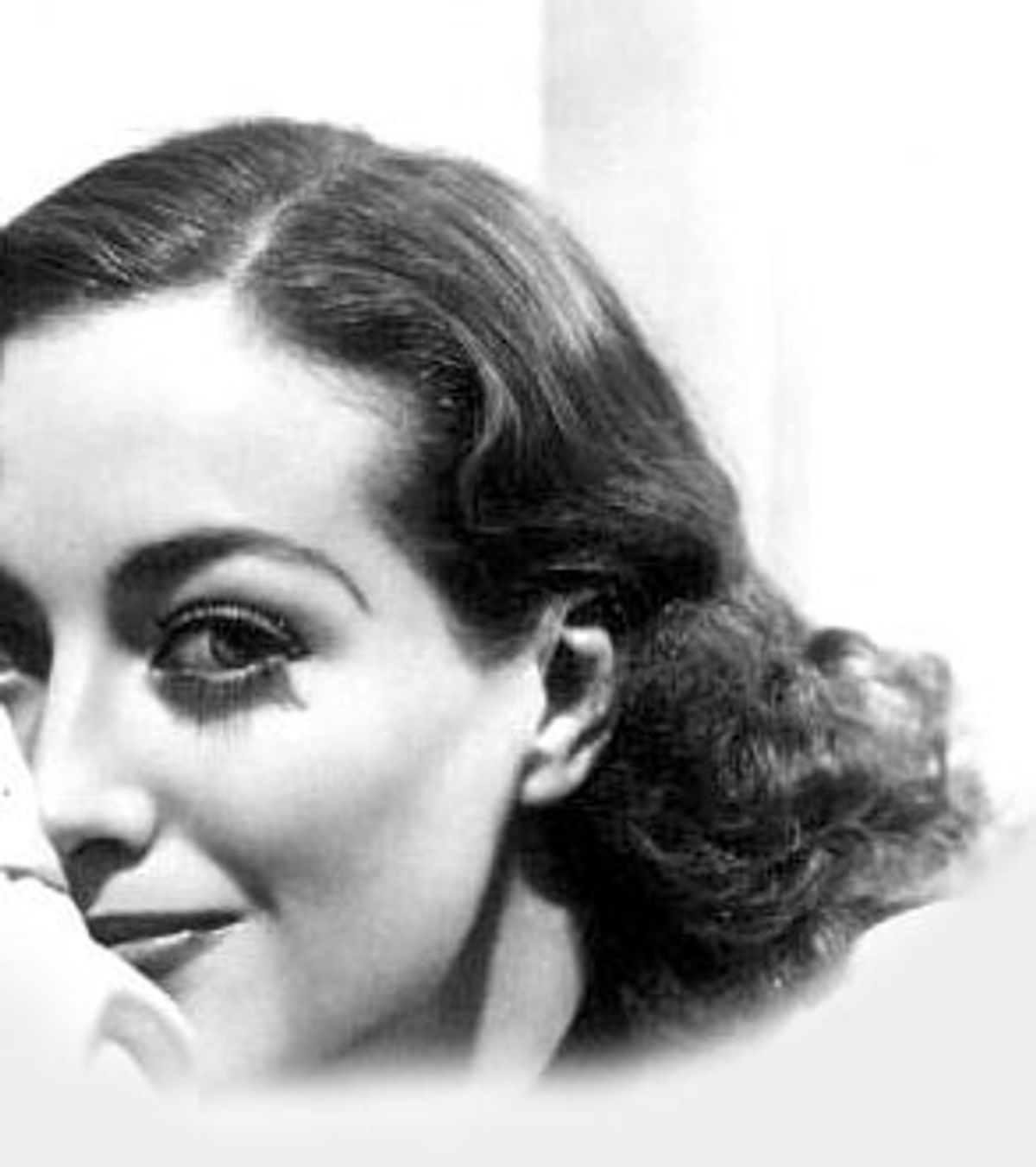 I was looking through some old picture books from Hollywood the other day, just leafing the rubber-plant pages aside, bored, and daring one of the great faces to stop me and make me think. And twice in a row, one face held me. It was the burning eyes and the knowing way they stared, not quite at the camera, but at some figure standing nearby -- the photographer, or just the entrepreneur of the whole seeing business.

Because the thing about the picture that was so tense, and so intriguing, was that there was this woman, all dressed up in the style of the early 1930s, her hair and face worked on for a couple of hours. But still, she was gazing at that figure beside the camera, her eyes full of reproach and even ruin, as if to say, Oh my God, you bastard -- you stole my look! Youre here to ravish me.

It was Joan Crawford. And it made me regret, once again, how that whole "Mommie Dearest" thing has had the effect of eclipsing the young Crawford, someone who was the first truly sexually demented woman to get into the movies. And it reminded me of a story.

Jackie Cooper was a child star of the early 1930s. He was with Wallace Beery in the original version of "The Champ" (in 1931), and a few years later he played Jim Hawkins to Beery's Long John Silver. He was under contract to Metro-Goldwyn-Mayer, the studio that specialized in child stars, and he had the screen character of a rough, tough kid -- nowhere near as well-mannered as Freddie Bartholomew, say.

Well, Cooper got to be about 17, which is a difficult age for child stars, because you're not a child anymore, but maybe you're never going to make it as a grown-up. In fact, Cooper's acting career lasted until the mid 1940s. But he was sliding. Years later, he came back as a director for television.

Cut to 1938. Cooper is 17, and full of energy. His mother is a friend of Joan Crawford's and she passes the word to Jackie that he'd be welcome to go over to her house and play badminton. Badminton is not casual. You see, Joan -- who had been born Lucille le Sueur in San Antonio, Texas -- was always the "tramp" actress at the studio. They changed her name, did a few little cosmetic operations and tried to teach her to behave. And they told her, no, she wasn't right for the "Lady" parts -- the ones Norma Shearer got, or Garbo, or any of the Metro ladies. Joan was an ideal working girl, someone with a past to hide perhaps. And the studio publicity people painted that picture vivid. They spread stories that there were stag movies in existence -- from hot Texas days -- of a very young Joan doing unspeakable but very watchable things. That's one of the ways Joan's eyes got that wounded look. And why she put in a badminton court -- badminton then being a very classy English sport over which a 17-year-old kid and an actress aged 34 could work up a healthy sweat.

One day, after they'd played, Joan caught Jackie looking down her dress. "Youre growing up," she said. He made some crude 17-year-old pass at her. She ordered him out of the house. He told her he wasn't going. So she drew the drapes, and told him to fuck her there and then.

Now, you have to realize that Joan's career was at a crisis, too -- it nearly always was. The men at Metro were beginning to lose faith in her. In just a few years, they'd drop her contract. And she was on the point of divorcing her second husband, actor Franchot Tone. So, for six months or so, the kid went over to the stars house to be screwed. "She was a very erudite professor of love," he would write later, after her death. "She was a wild woman. She would bathe me, powder me, cologne me. Then she would do it over again. She would put on high heels, a garter belt, and a large hat and pose in front of the mirror, turning this way and that way. 'Look,' she would say. I was already looking. But that sort of thing didnt particularly excite me. I kept thinking: The lady is crazy."

And, of course, you could play it that way, with the kid never quite understanding the older womans needs, her plight, and her need to create a fantasy about herself. But thats what makes it such a delicate -- as well as steamy -- scene, in some grand movie about the history of Hollywood. Its a story of a woman whose eyes "knew" she was always being photographed, dreaming of that lovely, private moment, and washing the kid down twice, just to be sure he was fit for a lady. Think about it, the next time you look at her haunted face.