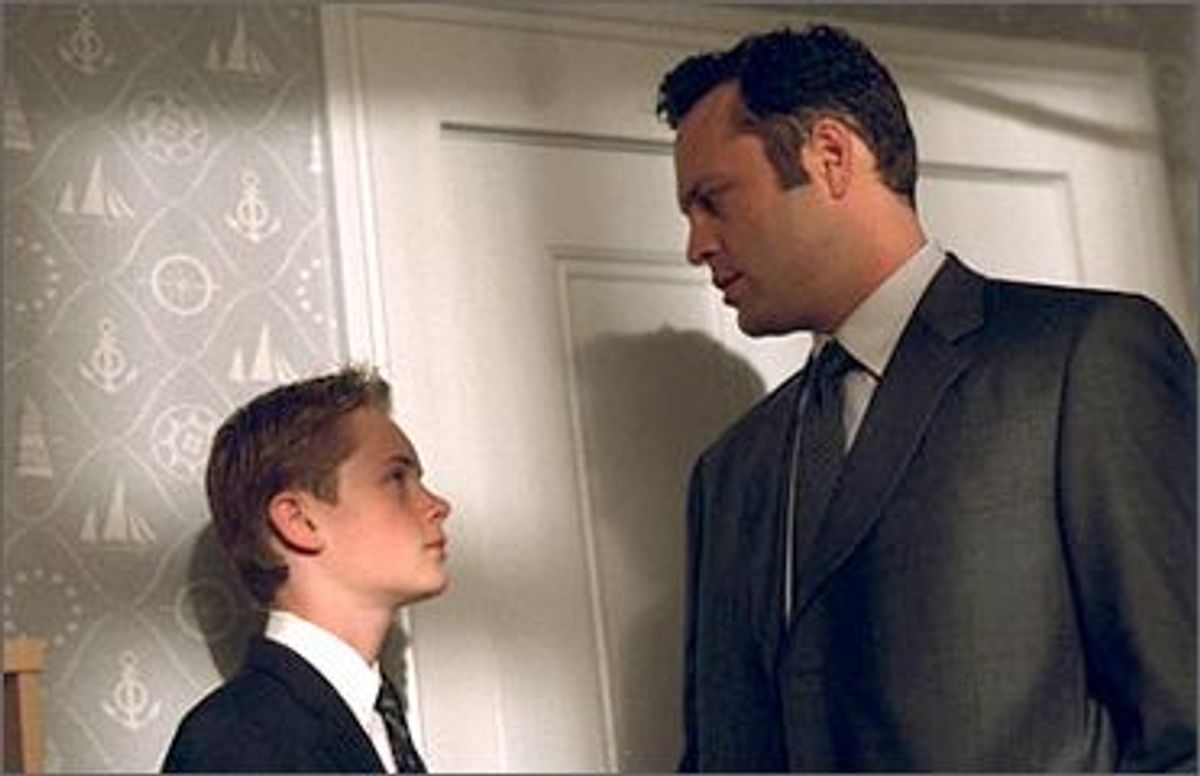 When it's clear from the outset that a thriller is going to be big and dumb -- as opposed to tight and smart -- the movie needs to gain momentum and thrust immediately, powered by the jet fuel of its own ridiculousness. Harold Becker's 1993 "Malice," so deliciously over the top, got it right; his latest, "Domestic Disturbance," is too fat and flabby to even attempt to get off the ground. It's big and dumb, all right -- the sort of thing you'd like to shoot with an elephant gun to put out of its misery.

John Travolta is a loving dad, recovering alcoholic and devoted builder of wooden boats, not necessarily in that order. In movie shorthand, he's a principled, likeable guy who has nonetheless made his share of mistakes: He still cares very deeply for his ex-wife, Teri Polo, who has decided to marry Vince Vaughn, a rich guy who has only fairly recently appeared in their coastal Maryland town. (The sudden appearance of a multimillionaire in their midst doesn't seem to have raised any eyebrows among the townsfolk.)

Travolta and Polo, having dealt with plenty of their own breakup difficulties, are also having trouble with their preteen son, Matt O'Leary, who doesn't much care for Vaughn and makes his displeasure known by repeatedly getting into trouble at school and becoming a minor nuisance to the local police. So when he sees Vaughn commit a murder and later reports it, no one in the town -- not the police chief, nor Polo, nor even, at first, Travolta -- stops to ask him a few basic questions. (Starting with, "What did the guy look like?") They simply dismiss his accusation as the usual shenanigans and send him home with Vaughn and Polo in the comfy family SUV, after which Vaughn, who never liked the kid to begin with, proceeds to terrorize him by pushing him against walls and stuff.

A thriller can be entertaining despite a few implausibilities. But in "Domestic Disturbance" they pile so high that they topple, and the trajectory of their idiocy throws you right out of the movie. When the police question O'Leary about the murder victim, they seem to be extremely interested in his name, which O'Leary doesn't know. "Therefore, he must be lying!" goes their logic. They send a few cops out to check Vaughn's vehicle, but since we've earlier seen Vaughn lovingly wipe the bloodstains off the passenger seat, we know they surely won't find any evidence there.

As his character is written (in the script by Lewis Colick), kid O'Leary is the sharpest and most believable character in the movie. The point is that the grown-ups around him -- Travolta aside, who rapidly comes to realize his kid is telling the truth -- are such buffoons that they can't grasp his intelligence and good sense. But the "bright kid vs. the world" shtick doesn't work here, particularly when Polo (normally a sharp enough actress) blinks her big eyes and professes not to understand why her son just won't accept her big lug of a second husband, the kind of guy who swaggers around town with a perpetual self-satisfied smirk on his face. Sure, adults can be dumb, but beyond a certain point, it's just too painful to watch so much half-wittedness unfold on screen.

The actors aren't much to watch, either. Travolta walks through the movie as if benumbed, jumping momentarily to life when he's called upon to deliver that famous crinkled smile or confront Vaughn with some tough-dad tough talk. With his doughy handsomeness, Vaughn has just the right look for his character, but he's too blanded-out to be particularly interesting. Even though I'm not sure we ever see him wearing a baseball cap turned backward, he's menacing in that aggressively regular-guy way; "Domestic Disturbance" needs a sharp, wily villain, but instead we get a Rotary Club yobbo.

The only ray of sunshine is Steve Buscemi, playing a shadowy figure from Vaughn's past who shows up, uninvited, at his wedding. Buscemi is one of those actors who almost always plays a type, but he understands that types have feelings, too. He burrows deep into the most cartoonish characters and pulls out mysterious and wonderful performances. (He's a distinctly humane and heartbreaking presence in the otherwise smug "Ghost World.") Buscemi has almost nothing to do here, but he's still a pleasure to watch, particularly when he confronts Vaughn privately at the wedding: "Did you register for a soup tureen? That's what I woulda gotten you -- if I'd been invited." It's a zany bit of dialogue, and Buscemi, his goldfish eyes darting about nervously, gives it a fun, wobbly spin.

You know Buscemi's a bad guy by his outfits: A checkered sportcoat for the wedding, a '70s thrift-shop leather jacket for casual wear, both teamed with knit golf shirts buttoned right up to his bodacious adam's apple. It's stock Buscemi wear, all right -- we've seen him show up in similar togs in other movies.

But even in the same old clothes, in the midst of a movie that's pure dunderheaded convention, Buscemi is a real person. Perched on a bed in a fleabag motel, his knobby chest only partially obscured by a baggy white undershirt -- the requisite floozy lounging languidly nearby, waiting to receive his ministrations -- he's the essence of seedy, scrawny sex appeal. By traditional standards Vince Vaughn is way cuter, and Travolta has more wattage. But Buscemi, even in this tiny role, stalks off with the movie. Like the Cheshire Cat, he leaves only his snaggle-tooth smile behind.