How one "Star Wars" fan nearly fixed the "Episode 1" disaster, and why George Lucas is indirectly stoking another kind of digital revolution. 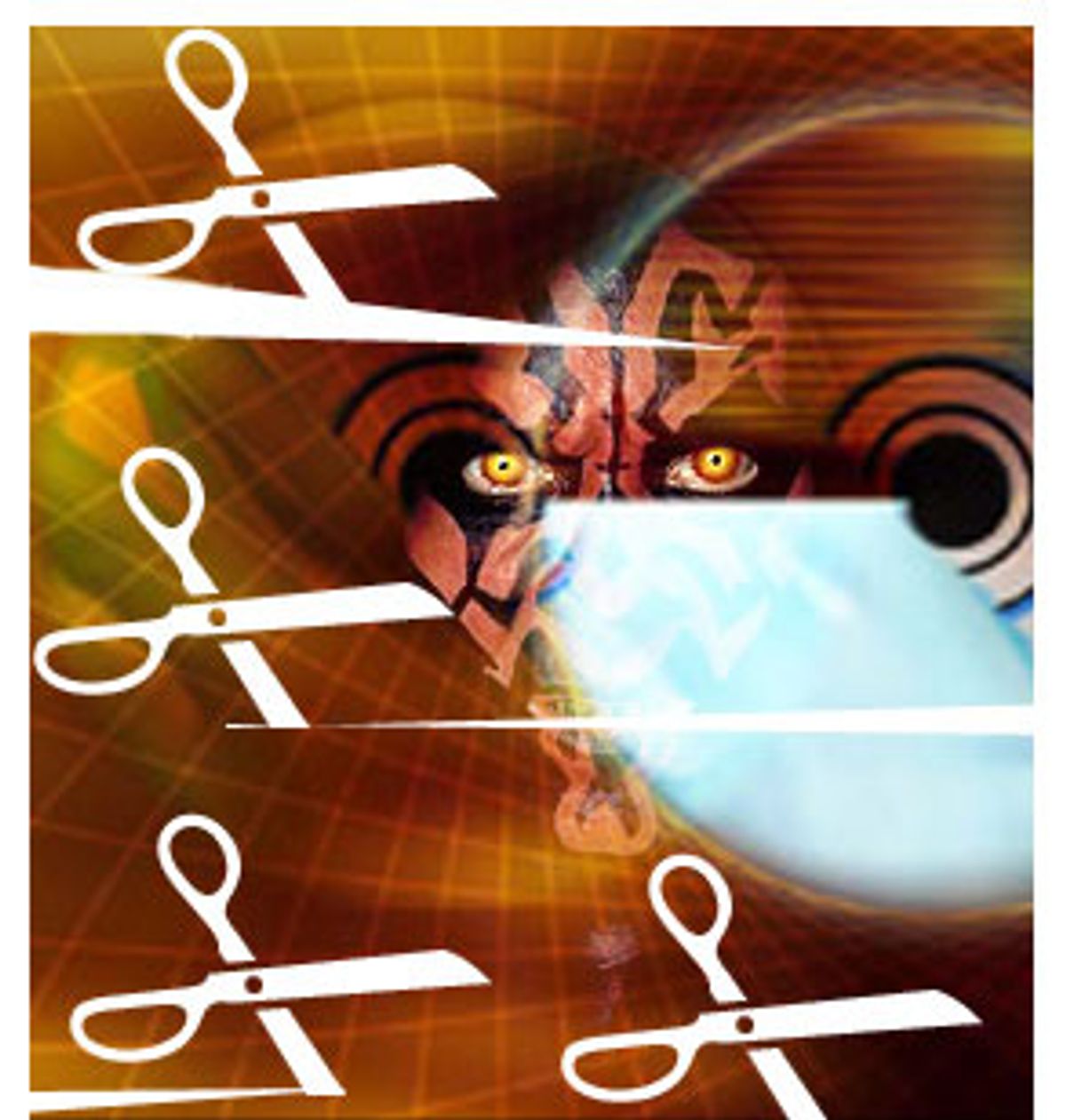 Earlier this year, rumors of a new, supposedly better version of "Star Wars: Episode 1 -- The Phantom Menace" began surfacing on the Internet. The rumor-mongers were not talking about the video version, which had already been released. Nor were they chattering about the then-unreleased DVD -- just out, with extended scenes and George Lucas commentary -- but actually a shorter version that was traversing the bootleg circuit. This version had been reedited by a fan who disliked the film, but who saw a lot of promise in the footage. The revision was titled "Episode 1.1 -- The Phantom Edit," and was, allegedly, much better than Lucas' original.

For a while it was treated as but a wishful myth. But through the infamous underground network of "Star Wars" fanatics, copies of the new version began popping up all over the place. Fans would watch it in a friend's living room or at a party, dub off a copy for themselves, download it onto their Web site and send it to other rabid fans.

No one knew who the "Phantom Editor" (as he identified himself at the start of the movie along with the e-mail address thephantomedit@hotmail.com) was or where the tape had its origins. But this added to the mystique and appeal, for materialized from out of nowhere was a good film that had been hidden inside the disappointing original one -- perhaps the film that every adult "Star Wars" fan had been hoping "Episode 1" would be.

Lucas supposedly was interested in seeing the reedit. And then it was rumored that the project was the work of filmmaker Kevin Smith ("Clerks," "Chasing Amy," "Dogma"), until a statement on Smith's Web site denied it, adding that he "has seen a copy and can confirm that it does exist." As further confirmation, a fan site popped up as a home base for discussion and analysis of the film (more than 105,961 hits thus far). Sample discussion subjects included "E-mail me if you want a copy," "need a copy of the re-edit.please!!!!" as well as the more jargon-y "unpacked .rar file is a 700MB DivX encoded video."

In early June, the alleged Phantom Editor himself, using the alias "Emily," posted a fabricated Chicago Tribune article on the fan site, falsely reporting that several Aurora, Ill.-area Blockbusters were renting the revised film. The article was soon pulled, but not until after it had been quoted as fact in several publications, including the New York Post and Inside.com.

Things continued to escalate. Bootleg tapes were being sold on the street and at comic book conventions. A group calling itself "The Phantom Edit Fan Network" began organizing mass distribution of the tapes, handing them out in front of theaters and sending them to people in as many different states and countries as they could. Other edited versions, known as "Episode 1.2", "1.14" and "The Phantom Re-Edit NY" began to surface, each with its own take on how to make the movie better. Reputable news sources like the Chicago Tribune began running reviews of these revisions. "There has never, so far as I know, been a movie-critic's cut," wrote Village Voice critic J. Hoberman in the New York Times Magazine.

Meanwhile, the responses from Lucasfilm spokespeople began turning from amiable to intimidating. Back in mid-June, Lucas spokeswoman Jeanne Cole told Zap2it.com, "When we first heard about the [reedits], we realized that these were fans having some fun with 'Star Wars,' which we've never had a problem with. But over the last 10 days, this thing has grown and taken on a life of its own -- as things sometimes do when associated with 'Star Wars.'

Furthermore, said Cole, Lucas no longer had any intention of watching any of the reedits.

On June 28 -- two weeks after the veiled threat from Lucasfilm -- the alleged Phantom Editor (who had previously admitted he was an industry outsider living in Los Angeles) e-mailed an apology to Zap2it.com, which it published in its entirety. It read in part:

"This project began as a personal endeavor when I watched 'The Phantom Menace' as an audience, analyzed it with the care and attention of a Lucas team member, and carefully re-edited it, concentrating on creating the storytelling style that Lucas originally made famous. ... Although I definitely appreciate all the unexpected attention and support, I also respect and understand the discontentment of Lucasfilm Ltd.

"For the record, I am not now nor have I ever sold copies of 'The Phantom Edit,' and I DO NOT support this. I do not want my name associated with these kinds of activities. ... I sincerely apologize to George Lucas, Lucasfilm Ltd. and the loyal 'Star Wars' fans around the world for my well-intentioned editing demonstration that escalated out of my control." It's true that the distribution channels for Phantom Edits have become a convoluted underground of hidden identities and carefully chosen words. No one wants to get in trouble with the Lucasfilm behemoth. At the same time, none of the editors seem to want credit for their work, either. These faceless "fan-toms" simply want to get their beloved Phantom Edits seen. For years, Lucas has been touting the approach of a new age of filmmaking, a revolution of sorts brought on by advancements in digital technology. He backed up his boasts with several key maneuvers. In 1997, he rereleased his original "Star Wars" trilogy as Special Editions. Each film was digitally remastered for optimal sound and picture quality and also included new scenes, shots and creatures of entirely digital origin.

"Episode 1 -- The Phantom Menace" relied even more on digital imaging: Entire cities, action sequences, even major characters (including the much-maligned Jar-Jar Binks) existed principally inside a computer. Audaciously, Lucas decided to shoot next year's "Episode 2" on a 24-frame digital video camera rather than the standard 35mm film. The entire movie industry is well aware that a success could change the face of Hollywood forever.

However, it seems that the very technology that Lucas embraces has turned against him. Whereas digital technology equals "boundless imagination" for Lucas, it equals "cheap accessibility" for everyone else. These days, for a couple thousand dollars, you can own your own digital video camera and editing system, from which you can burn your movie directly to a DVD or download it onto your personal Web site. High-quality moviemaking no longer takes a crew of hundreds. It takes one person. And this is how "The Phantom Edit" was most likely created.

If you want to judge "The Phantom Edit" for yourself, it's not too hard to nab a copy -- just log onto the fan site, and read the discussion board, where you'll find plenty of people willing to send or download you a copy. But far-reaching ramifications aside, "The Phantom Edit" itself is no classic, although it is indeed a better film than the 1.0 version.

The edit begins with the famous yellow scroll across the starry sky, only this time the scroll reads, in part:

"... Being someone of the 'George Lucas Generation' I have re-edited a standard VHS version of "The Phantom Menace," into what I believe is a much stronger film by relieving the viewer of as much story redundancy, Anakin action and dialog, and Jar Jar Binks as possible."

(Lucas' perplexing opening paragraph about "trade relations" and the "Imperial Senate" is gone. And we don't miss it because it wasn't necessary. Already, "The Phantom Edit" is making improvements.)

Twenty minutes have been cut from the original 133, and as a result the film is tighter and faster. Jar-Jar, who has been demoted to an almost silent supporting role, is actually enjoyable. (A different "Phantom Edit" has dubbed over Jar-Jar with an alien voice, giving him subtitled dialogue that turns the gibbering idiot into a wise sage, spouting pearls like "Children and fools ask more questions" and "Pride can blind you from the truth.") Likewise, young Anakin -- whose shouts of "Yahoo!" and "Whoopee!" made many "Star Wars" fans grimace -- is a thoughtful, much quieter protagonist.

Although entire extraneous sequences are missing (the journey to and from Jar-Jar's underwater home have been sliced), most of the changes are simply felt rather than individually noticed, as is the case with any good edit. The Phantom Editor has smartly taken advantage of Lucas' trademark "wipes" (a scene transition that scoots a new scene in from one edge of the screen to the other) to duck out of scenes early.

Although the film is improved in pace and structure, the result is a movie that occasionally moves too fast. We are left with a film made up of really short scenes -- almost sound bytes --- that start to feel choppy and rushed. While it advances the story faster, the film obviously cares for its characters even less than before.

More than anything, "The Phantom Edit" magnifies problems that can't be fixed with clever editing: too many bland, uninvolving characters (the stoic Jedis, the stoic Princess Amidala, way too many digital characters), too few scenes with Darth Maul, no renegade comic relief à la Han Solo, and a typically confusing final battle that takes place in about 13 different locations at once.

Until the "Phantom Edit" controversy, the role of the editor has rarely been appreciated by the public. And in a way, "The Phantom Edit" illustrates that editors are not automatons serving a dictatorial director, but artists in their own right, contributing as much to a finished film as a writer or cinematographer.

But it is not easy to classify the Phantom Editor as simply an editor, for he is also a revisionist filmmaker, a film critic and -- perhaps most of all -- a restoration artist. The Phantom Editor has gone back to a completed artwork and tried to bring out what he saw as the "real" film, buried within Lucas' edit. Aside from the fact that he's subtracting footage rather than adding, the only difference between "The Phantom Edit" and what Lucas did with his rereleased "Special Editions" is permission.

If the still-growing deluge of "Phantom Menace" interpretations are any indication, this is only the beginning. We might see ambitious amateur editors take on overlong projects like "The Green Mile" or "Meet Joe Black," or perhaps attempt to edit a TV series like "Twin Peaks" into a coherent feature-length film. It almost goes without saying that if 2002's "Episode 2" fails to live up to expectations, we will see "Episode 2.1" through "2.9" by year's end.

With its obvious parallels to the Napster debate, the shifting of power from the filmmakers to the fans is both disturbing and exciting. It is disturbing because there will no longer be any sort of quality control, aside from the natural assumption that the best "fan edits" will be the ones that get passed around the most. We may have 100 different versions of the next "Star Wars," and 95 of them will be sub-par.

What's exciting is that one or two of these versions will not only be reedits but reimaginings, radically changing the narrative through unexpected audio and visual juxtapositions. The possibilities are endless -- indeed, "Battlefield Earth" may be a much better picture when reedited into a 15-minute experimental short film. In the upcoming years we will be privileged to witness, essentially, critics making movies, which we haven't seen in abundance since French New Wavers like Godard and Truffaut decided that the best response to a film was making another film.

If nothing else, the arrival of the fan edit takes its place alongside the recent slew of good movies made on consumer video cameras (such as "The Celebration," "Dancer in the Dark," "Chuck & Buck," "The Blair Witch Project" and the just-released "Lisa Picard Is Famous"), as yet another way in which the proliferation of digital technology could change the movie industry for the better. Because if the filmmakers themselves can't cut it, the fans will.