Hanan Mikhail-Ashrawi tells Osama bin Laden he does "not have the right to use" the Palestinian plight "for your ends." 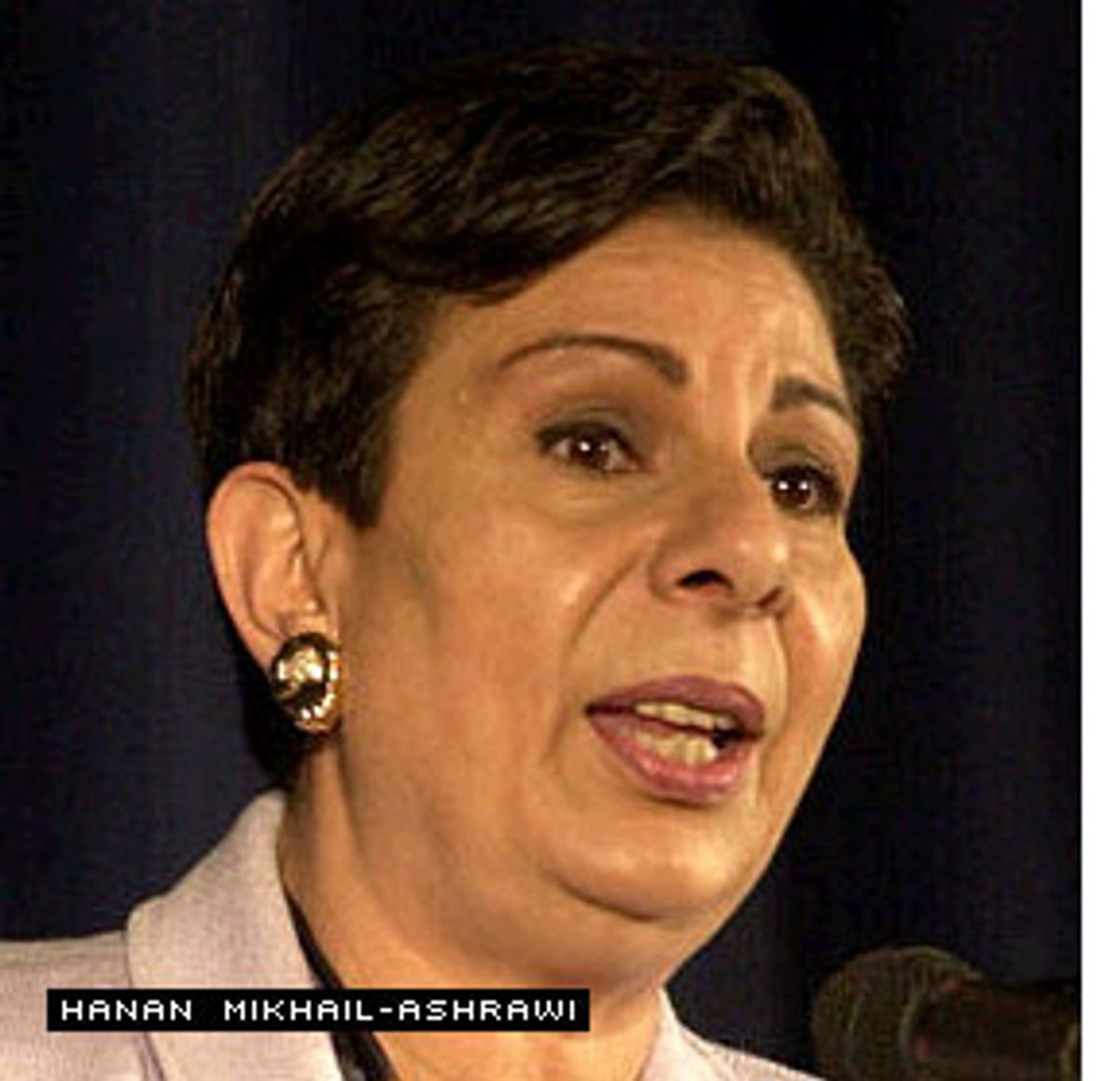 Hanan Mikhail-Ashrawi, a longtime Palestinian leader and spokesperson for Yasser Arafat, called Monday on the United States to immediately broker a peace settlement between the Palestinians and the Israelis. Asserting that the unresolved plight of the Palestinians was "one of the major causes of extremism in the world," she asked, "How do we move beyond the pain of the moment towards an American involvement that is positively intrusive?"

In a speech and subsequent question-and-answer session hosted by the Commonwealth Club here, Mikhail-Ashrawi -- who is in the United States to meet with Secretary of State Colin Powell and the National Security Council, as well as to publicize the Palestinian position -- said that the Palestinian Authority was prepared to sit down with Israeli Prime Minister Ariel Sharon at any time. She forcefully denounced Israel's 33-year occupation of the West Bank and Gaza and its ongoing military incursion and, with equal force, condemned the recent "horrific" terrorist attacks on the United States. Disavowing Osama bin-Laden's repeated invocation of the Palestinian cause, she said "Our cause is not up for grabs. You do not have the right to use it for your ends. We have been victims all our lives and we do not condone the victimization of others."

Mikhail-Ashrawi became familiar to Americans when she began appearing on programs like ABC's "Nightline" in the late 1980s. Her image as a reasonable, female (and, anomalously, Christian) spokesperson for the PLO has given the organization a much-needed P.R. boost. Opening her remarks by expressing her "sincere condolences and our total identification with the victims" of the Sept. 11 attacks, she said that what was needed was a "global campaign to prevent the causes" from continuing. "I've been encouraged by the fact that most Americans have gone past the immediate need for revenge," she said, noting that there was an "unprecedented enrollment in classes on the Middle East. Our greatest enemy is ignorance, our greatest ally is the truth. We must deal not just with visceral reactions but the underlying causes of conflict ... We are part of a global human community. We are our brothers' and sisters' keepers."

Mikhail-Ashrawi, who in addition to being a member of the Palestinian Legislative Council and commissioner of information for the Arab League is a professor of English at Bir Zeit University in the West Bank, described at some length the actual experience of living under occupation. "I live in Ramallah [in the West Bank] and have an address in Jerusalem," she said. "For the last two weeks we've had tanks on the streets down from my house. We regularly hear gunfire and the vibrations from the tanks. You rarely have a full night's sleep. You cannot walk out and assume you won't be killed. One friend of mine was killed while shopping."

On the way to work, she said, she had to pass through two different checkpoints -- "at one of them, Calandia checkpoint, there are always shootings and confrontations. Quite often I have to duck bullets or run through clouds of teargas. There's nothing that you can take for granted -- that you won't be stopped and humiliated by an 18-year-old soldier who feels that he has a God-given right to humiliate you."

Mikhail-Ashrawi, who has been involved in all the major Israel-Palestinian negotiations in the last decade (her contacts with Israeli moderates proved instrumental in starting the 1992 back-channel discussions that led to the 1993 Oslo agreements), blamed Israel for the ongoing deadlock and, by extension, for the continuing terror attacks against Israelis. "The occupation has been allowed to continue for too long," she said, clearly referring to America's refusal to pressure Israel to pull out of the West Bank and Gaza. "The Palestinians are still languishing under the most brutal siege ... Every single Palestinian feels personally targeted."

Starting in Madrid in 1991, and continuing through the present day, Israel has turned the search for peace into a "punitive process," Mikhail-Ashrawi said. "As the mentality of occupation continued, there was ongoing unilateralism -- ongoing settlement activity, bypass roads, blockades ... Instead of getting dividends from the peace process, we paid a price." As a result of these provocative Israeli actions -- and of the Bush administration's withdrawal from the negotiations -- the Palestinians ceased to believe that the peace talks were anything more than a "cover" for continuing Israeli territorial expansion and occupation, she said.

Mikhail-Ashrawi denied that the Palestinians were to blame for the collapse of the 2000 Camp David talks, at which then-Prime Minister Ehud Barak offered more concessions than any previous Israeli leader. "At Camp David, you all heard about the 'generous offer,'" she said sharply. "This is the typical patronizing attitude of the colonizer toward the colonized -- you have to be grateful." In her eyes, Israel's Camp David offer was simply insufficient, falling far short of meeting minimal Palestinian demands for territorial contiguity, sovereignty over East Jerusalem, and the right of return of refugees and demanding that Israel retain security control over the Jordan Valley. "To us, this was likely to provoke further violence and conflict throughout the region." She also blamed domestic American political considerations for the collapse of Camp David: "Clinton wanted an instant legacy and said we should fall into line." This "take it or leave it" approach, Mikhail-Ashrawi said, was not productive.

As for the intifada (the so-called Al-Aqsa Intifada or Second Intifada) that followed the breakdown of negotiations, Mikhail-Ashrawi denied that it was organized. "The intifada wasn't planned," she said. "Sharon succeeded in provoking Palestinian public opinion beyond endurance -- especially since the talks had foundered on the issue of Jerusalem." (In a move many Israelis criticized as intentionally provocative, Sharon -- despised by Palestinians for many reasons, including his role in the notorious Qibya massacre in 1953 -- visited the Temple Mount compound, near the Dome of the Rock, one of Islam's holiest shrines, in September 1999. The riots that turned into the second intifada immediately followed.)

Mikhail-Ashrawi was visiting San Francisco the day after a Palestinian gunman opened fire on an Israeli city bus, killing two teenagers and wounding dozens of others. Asked about Palestinian assaults against Israelis, Mikhail-Ashrawi walked a familiar, fine line between outright rejection of violence and tacit acceptance of it as a response to what she called an intolerable and unjust occupation. She said, "I think terrorism of all kinds is destructive. I think every human life is valuable" -- a line which drew prolonged applause from the large, mostly sympathetic audience. She went on to say, "Ours is a just cause. Ours is not a cause that should be hijacked by extremists."

Asked to differentiate between "freedom fighters" and "terrorists" and what could be done to control Islamic Jihad and Hamas (radical fundamentalist groups that have launched numerous deadly attacks against Israelis), she said, "Of course we can [distinguish between] terrorists and freedom fighters. I support peaceful resistance -- being shot at is part of my life. Freedom fighters are those who resist occupation, but I've always said you do not go into other people's land. Therefore you do not do to them what they do to us."

But then, in perhaps her most direct confrontation with mainstream American opinion -- not to mention official State Department classification -- Mikhail-Ashrawi said, "I do not consider Hamas and Islamic Jihad terrorist organizations. We've always had ongoing dialogue and debate. I do not agree with their military wings or their military action. But as part of our political discussion I will talk to them. If we are talking to Israelis, I don't see why we shouldn't talk to them. We should give them a stake in the process. You need to show them that peaceful means work. But the more Israel escalates, the more it encourages actions on the other side." She called for a settlement that would "make violence something that is self-defeating."

Mikhail-Ashrawi was then asked whether the radical rejectionists like Hamas, Islamic Jihad and the PFLP (the PLO splinter group that claimed responsibility for the recent assassination of Israeli Cabinet Minister Rehavam Zeevi, itself a response to an earlier Israeli assassination of the PFLP leader) could be controlled. "You can't control them by massive arrests," she said. "They arrest people on the basis of their political beliefs, regardless of evidence. You can't go on a rampage and arrest everyone who holds views different from us. You can neutralize the violent tendencies by robbing them of their constituency. Control isn't the right word ... We gave [Israel] a long list of settlers and people who have killed many of our people, and nothing was done. It's up to the occupier to control its army."

Mikhail-Ashrawi said she was happy to have the opportunity to comment on the widely shown film of Palestinians celebrating the Sept. 11 attacks. "Right after the tragedy, there were Palestinians who did react like that, without knowing the full extent of the attack. They were wounded, bruised, traumatized -- their initial reaction was, 'Maybe now they understand our situation.' I don't condone this, but they were a very distinct minority. That incident was used to express the whole Palestinian people. I know many more people who participated in candlelight vigils, who wanted to give blood." She said that she asked one news crew why they didn't show pictures reflecting the attitude of the majority of Palestinians: "I was told it wasn't dramatic or newsworthy. It distorts our humanity. Unfortunately, this isn't new. We have always been perceived through the eyes of others. We have to get beyond that."

Since Sept. 11, Mikhail-Ashrawi said , the Israeli-Palestinian conflict has become a serious problem for the Bush administration, forcing the U.S. to rethink its policy. "The American role at the beginning [of the Bush administration] was to adopt a hands-off approach -- this was interpreted by the Israelis as a green light to do anything ... Now, after Sept. 11, Israel's behavior has become a serious liability to the U.S.," both in the short term in holding the anti-terrorism coalition together, and in "terms of a long-range strategy in the region." The status quo, with "adoption of Israeli interests as the determining factor in U.S. policy in the region," was no longer tenable, Mikhail-Ashrawi said. Acknowledging that President Bush had stated that it had always been part of a U.S. vision that a Palestinian state emerge, she said, "It's not going to happen by default and it's not going to happen if Israel continues to occupy us."

Asked, in conclusion, what were the two most important things that must happen to make peace, she said, "Ensure that the Israeli army immediately withdraw from our lands, back to where it belongs. And simultaneously, we have to start immediate negotiations with a third party. We need an active, even-handed but decisive U.S. intervention."