Hugh Hefner, the Emmys and the breathless "24"

At Hef's roast, Comedy Central bleeps every other word; Ellen DeGeneres does her best on the pointless Emmys; and "24" rocks hard. 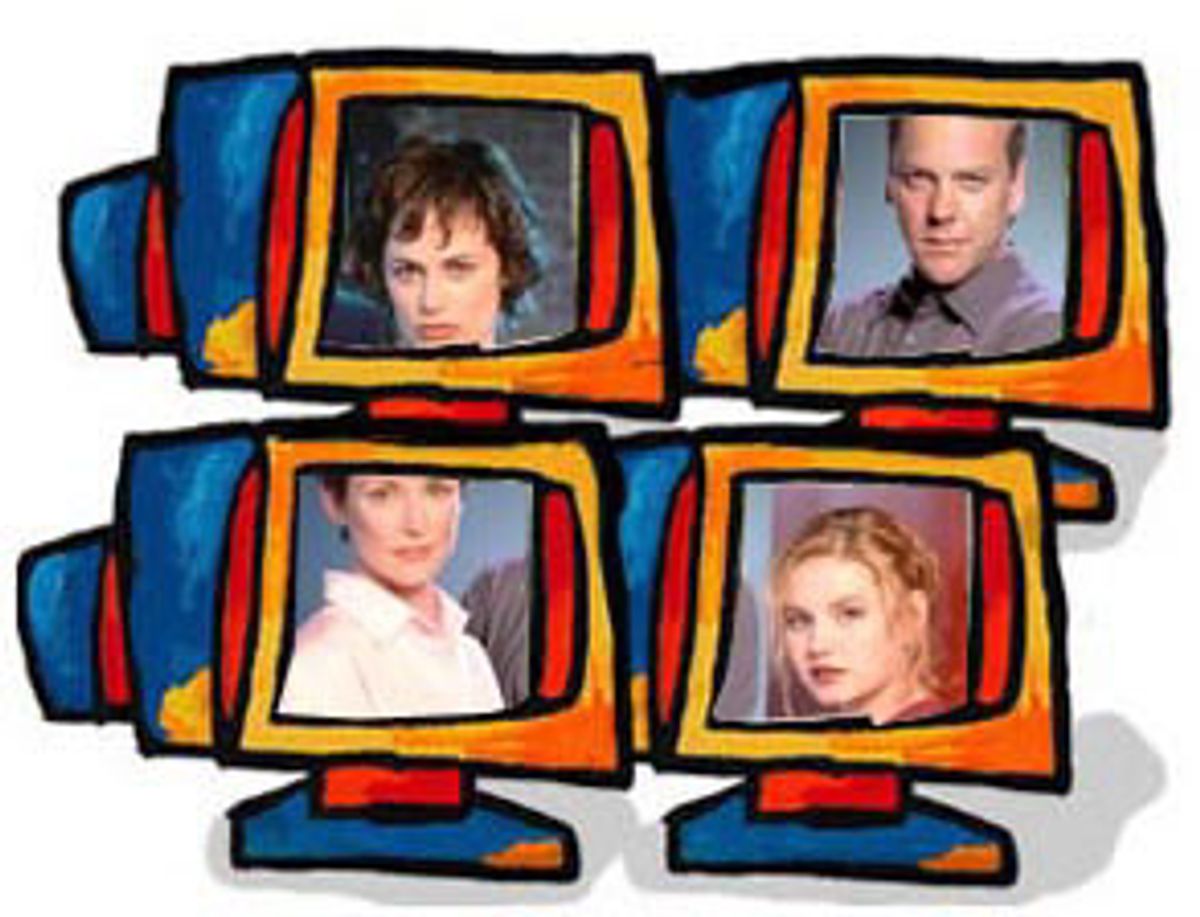 After postponing them twice, changing the venue from the 6,000-seat Shriners Auditorium to the 2,000-seat Schubert Theater, declaring the overhead airspace a "no-fly" zone, barricading the streets, peppering nearby roofs with sharpshooters, deploying choppers, toning down the dress code, searching limos, passing guests through metal detectors and kicking off the show with not one but two rounds of disclaimers full of more unnecessary rationalizations than Calista Flockhart after a celery binge (one delivered by the announcer, who clarified that the show's "presence here does more than honor an industry, it honors the freedoms that set us apart as a nation and a people"; the other, via satellite from Toronto, by none other than Walter Cronkite, who explained that "this public celebration of the best in television" had been "altered considerably from its usual gala to accommodate that difficult melding of our deep grief for our losses, our concern for our safety and, as the president suggested and our nation agreed, life must go on in our American tradition"), the Academy of Television Arts and Sciences finally aired the Emmys tonight.

"Television, the great common denominator, has lifted our vision and reminded us that entertainment can help us heal," Cronkite added, somewhat gratuitously. After two months of benefit shows and tributes, we've become quite comfortable with seeing celebrities gather in front of cameras to express our feelings. It's fine. It's just that the justifications seem to call more attention to the attention than anything else.

Luckily, reminding us that entertainment can help us heal tonight was host Ellen DeGeneres, who eased some of the discomfort right away by welcoming "security guards, Secret Service personnel and all the wonderful TV stars we love so much who are watching from home" to "the 53rd, 54th and 55th Emmy Awards." Her loopy and hesitant brand of humor and good-natured guilelessness lent the perfect combination of levity and honesty to a show that could have devolved into something as cringy and maudlin as one of the recent star-studded benefits. But Ellen managed to make even industry in-jokes seem inclusive, patriotic and universal, as in, "I think it's important for us to be here, because they can't take away our striving for excellence, our creativity, our joy -- only network executives can do that."

Hollywood has finally figured out how to incorporate the tragedy into an evening's entertainment: Do whatever it is you do, just make sure you boil down the message to something along the lines of "Isn't it great to live in a country where we can do this" or "This is what our country is all about" or "This is why they hate us -- aren't we cute?"

"I felt it was important for me to be here tonight," Ellen said, "because what would bug the Taliban more than seeing a gay woman in a suit surrounded by Jews?" -- a quip that first appeared in danger of wearing thin back when it was used to validate the VH1 Fashion Awards telecast in October. Lately, it seems that no ritual commemoration of inconsequence is so cheesy, shallow or insincere that it can't be served as an example of "our American tradition." Not that this was the case tonight during the very tasteful Emmy awards telecast -- but the New York Friar's Club is roasting Hugh Hefner later. Stay tuned -- it's filthy and patriotic!

Reminding us of what can happen when there isn't an international crisis to dampen the mood, however, Bradley Whitford, who won the best supporting actor award for his portayal of Josh Lyman on "The West Wing," came across like a beauty-pageant contestant entering the final five. There's nothing like watching an award-winning actor nearly burst with the sort of ostentatious family love that makes viewers at home wonder if maybe we're missing something, emotionally.

"I want to thank my children for their miraculous selves and for saving my wife and I from terminal self-involvement!" cried Whitford, an outburst that Ellen mercifully followed up with a deadpan, "Aw, come on!"

"The West Wing" picked up eight awards tonight -- more than any other show-- including best drama. A jittery-looking Aaron Sorkin notably lost the best writing in a drama series Emmy to "Sopranos" writers Robin Green and Mitchell Burgess, who thanked him for not winning and all around gave the most unpleasant speech of the night.

"I hope I'm not the only Soprano to win tonight," Green giggled, "because it's going to be hell going back on that plane. It's scary enough to fly already." "The Sopranos" went on to receive three awards, including best actor and actress in a drama series for James Gandolfini and Edie Falco.

DeGeneres maintained her light touch throughout, introducing Steve Martin as Leslie Nielsen, putting on a swan dress like the one Björk wore to the Academy Awards, venturing out into the publicists' "holding area" and the Siberian press tent to mingle with the media proles. It wouldn't be an awards show without at least one swipe at the suits. I liked actress Jean Smart's tribute to David Angell, the "Frasier" executive producer who was killed aboard one of the hijacked planes on Sept. 11, and that she took the opportunity to upbraid network executives' for their ageism, saying, "The next time a writer with a few gray hairs comes into your office ... remember David Angell."

HBO's "Sex and the City" beat out four popular network shows for best comedy series, a first for a cable show. "Everybody Loves Raymond's" Patricia Heaton won best actress in a comedy series, and was the only winner to thank the armed forces, even after the tribute to USO entertainers. When Judy Davis won for best actress in a television movie -- but like many of tonight's winners, was not there to accept -- Steve Martin rushed the stage and grabbed the statuette from Martin Sheen's hand, crying, "I'm sorry, I didn't win in my category and I see all these Emmys going begging ...!"

These were the sorts of moments that made up for others, such as Television Academy chairman Bryce Zabel's declaration that "to have given up would have been defeat" (maybe it's time to table that metaphor) and reminder that "in such challenging times, these cultural touchstones become more important." Like "Everybody Loves Raymond"!

"Let history remember," Zybel proclaimed grandly, "that the 53rd Emmy Awards stood up to fear and hate and celebrated the American spirit" -- and, of course, as always, collected that $3 million from CBS.

What exactly do they mean by mature audiences?

After tributes, benefits and now the Emmy Awards have made it clear that overly long, on-camera stroke-fests starring folks the Taliban love to hate are what freedom is all about, the New York Friar's Club roasts Hugh Hefner -- and gets Jimmy Kimmel of "The Man Show" to host.

Alan King introduces Hef as "the man who made jacking off a national pastime, a man who thinks the early-bird special is eating [BLEEP] before 6 o'clock," pretty much setting the tone for the evening -- a tone that will be high-pitched, piercing, intermittent and familiar to anyone who has ever spent time with a dying cellphone battery. This show has more beeps in it than a "Road Runner" cartoon.

But as Kimmel said, "I could go on and on, but what can be said about Hef that hasn't already been mumbled incoherently by a thousand young women with his [BLEEP] in their mouths?"

Fox's "24" premieres tonight, after some reshuffling and the removal of an image of an exploding plane, bombed by a terrorist. The show centers on the very busy and complicated professional and personal life of Counter Terrorist Unit officer and frantic-yet-sensitive boomer Jack Bauer (Kiefer Sutherland), and its gimmick is that it's supposed to unfold in real time. Twenty-four episodes will cover the 24 hours it will take Jack to prevent the assassination of Senator David Palmer, the first black candidate with a real shot at the White House, on the morning of the California primary.

It's a lot to pack into an hour. The superslick action starts at midnight (Pacific Standard Time) with a man in Kuala Lumpur, Malaysia, opening a suitcase containing all his telecommunications needs. A satellite moves. Thanks to the phone and computer in his Samsonite, the man is able to alert another man of an imminent attack on Senator Palmer just before angry people start banging on his door. Meanwhile, Senator Palmer is in Los Angeles, writing a speech and loving his wife, as Jack Bauer plays chess with a hot young babe who turns out to be his high-schooler daughter. Moments later, Kim and a friend sneak out to meet a couple of college guys in the Valley; but before Jack can use his counterterrorism skills to track her down, he's alerted to the alerts and called back into work. His goal: to prevent the assassination of the first black senator with a shot at the White House on the morning of the California primaries. His complication: Where's Kimmy? Our problem: Premature exhaustion.

Fox has borrowed the split-screen technique from Mike Figgis' "Time Code," though, mercifully, has not attempted to show parallel narratives happening simultaneously on the screen -- a technique that Figgis pioneered in his film like the Donner party pioneered the Rockies. Fox, being Fox, considers the concept of "real time" slightly elastic. Within minutes, young Kim is partying in an empty furniture store in the Valley and Jack's wife, Teri, is hopping into a car with Kim's friend's dad, looking for the girls. If this is real time, either it takes much less time to drive around L.A. than I remember or Counter Terrorist Unit officers don't live in the choicest neighborhoods. Personally, I think watching Kiefer Sutherland -- who comes across as a likable pot-bellied surfer boy -- having to go to the bathroom at a crucial moment, or getting a really bad itch, or lingering in front of his closet would make the show better. But turbo-pacing, spy-movie dialogue, hot-chick secret agents (and hot-chick assistants, wives, computer experts and daughters), walls of jargon and clichéd interpersonal relationships aside, "24" could turn out to be fun.

Jack, who may or may not have cheated on his wife with his lacquer-lipped chief of staff, Nina (whom he nonetheless treats to a lecture on compromise), suffers from the usual boomer anguish in both his personal life (he gave his daughter her own e-mail password to show he trusted her, and now she's sneaking out and smoking pot!) and his professional life (he trusted his own people, and they turned out to be "dirty!"). We later learn that Jack is not above shooting a district director in the leg with a tranquilizer dart and blackmailing him for information. Fighting terrorism isn't pretty, we're supposed to gather.

Meanwhile, Senator Palmer gets a phone call from a news anchor, wanting a response to certain "allegations." Wouldn't his staff be helping him out on calls like this?

Meanwhile, Teri is driving around the Valley with a stranger past midnight.

Meanwhile, Jack has resolved to track them down.

The screen splits again: A worried senator, a worried dad, a worried mom, a worried kid, am extremely peeved district director, a hot but psychotic killer approaching ... I feel nervous. Did I leave the coffee maker on?