"We need to get lucky"

Michael Ignatieff, author of "Virtual War," talks about the politics of bombing Afghanistan, the viability of U.S. military strategy and why morality has nothing to do with either. 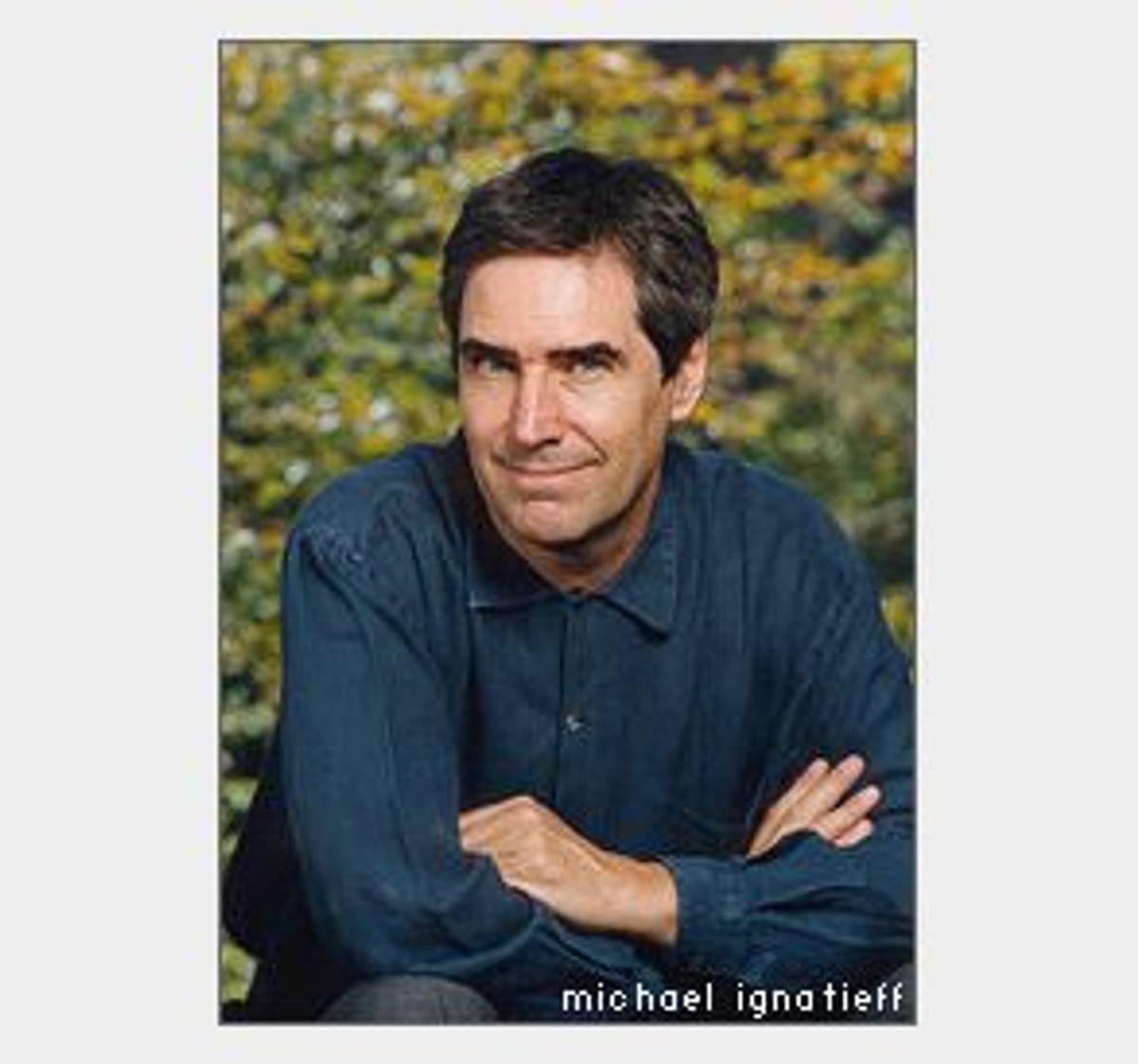 As opposition to the United States' bombing campaign in Afghanistan increases worldwide, many Americans are asking whether the use of ground troops instead of aerial bombardment might not be a more effective method. For some, like Senators John McCain, R-Ariz. and John Kerry, D-Mass., ground troops are necessary to fulfill the nation's military objectives, such as the routing of al-Quaeda. For others, like Sen. Joseph Biden, D-Del., the bombing campaign makes the U.S. look bad at a time when retaining the moral high ground is of strategic importance. Three weeks ago, Biden told the Council on Foreign Relations, "With every hour that passes, the United States pays an escalating price in the Arab world, and faces complaints that it is a high-tech bully that only attacks from the air."

Despite recent victories for the Northern Alliance, the establishment of civic order in Afghanistan and the capture of Osama bin Laden will difficult to accomplish without American assistance. If that assistance comes in the form of even more intensive aerial bombardment of enemy areas, bombing that is seen as imprecise and resulting in many civilian casualties, the already fragile alliance between the U.S. and its Muslim allies may fracture. In an essay in Salon a few weeks ago, Walter Ellis, a former editor and columnist at the London Sunday Times, wrote, "What is at issue is Washington's unwillingness to rate U.S. citizens at the same human valuation they apply to others. As things stand, this is how it looks."

In "Virtual War: Kosovo and Beyond," Michael Ignatieff, a journalist and professor of the practice of human rights policy at Harvard, questioned the nature of NATO's intervention in the Balkans. He suggested that high-tech, "risk-free" warfare makes it easier for us to wage military campaigns and fosters a sense of our own invulnerability. Obviously, however, since Sept. 11, few Americans feel as safe from foreign attackers as they did throughout the Balkan conflict. The two scenarios seem entirely different, yet criticism of the U.S.'s current air campaign recalls the objections to its intervention in the Balkans: Are we modern-weapons bullies who wouldn't be nearly as war-hungry if our own men faced the same risks that we impose on others?

Salon spoke to Ignatieff last week, from his office at Harvard University in Cambridge, Mass.

Implicit in some criticism of the air war is that it is somehow immoral to bomb from up high where our servicemen aren't at risk.

That's moral perfectionism. Why isn't saving the lives of American servicemen an extremely important moral goal? I would have thought it was. There's very substantial care taken by the bombing campaign to comply with the Geneva Convention. That's important. They're not just spraying ordnance all over the landscape here. You can see on TV that the Kandahar market is bustling. The streets of Kabul are bustling. This is what makes it different from Dresden or Hamburg. They're sending a lot of B-52 strikes against front line positions and they appear to be using these 15,000-pound bombs to blast open caves and tunnels. But all of that seems pretty legitimate. Why not use high-tech, standoff techniques if they'll work? Why not use them if they're Geneva Convention-compliant?

I don't think it's a moral issue. The real, practical issue is: Will it work? Can you use standoff techniques and virtual war technologies to overthrow the Taliban and shift the military balance toward the Northern Alliance? It's anybody's guess whether you can.

Is this a virtual war?

At the moment, it's much more reminiscent of the Kosovo operation than one might have assumed at the beginning. I don't think it will stay like the Kosovo operation because there will be more special forces operations. I don't see how you can close with al-Qaida without up-close and personal operations, but we're using proxies a bit like we used the KLA. We're trying to get the Northern Alliance to scare the Taliban out of position and then hit them from the air. That's rather reminiscent of what was happening with the KLA in May of 1999.

The long-term question is whether this can be done without ground troops. Again, people who think it's somehow moral to commit ground troops don't seem to understand how destructive ground combat would be, not only to American soldiers but to civilians caught in the middle. So if we can do it with high-tech stuff, why not? My question is whether we can, and I just don't know.

Might people who support ground troops think that that could somehow make us look better or help the propaganda campaign?

Well, that would be the worst possible reason. Never do anything just because you want to look good. Do something because you want to be effective. The Afghans are the best ambush fighters in the world. They are a serious enemy. And the one thing we must be very careful of is to not walk into a trap set for us by bin Laden.

What does he want to happen?

So far, what he most wants is to draw us into a war of occupation like the Russians. He wants to replicate the Russian experience where they put in huge numbers of troops and have to move mobile columns down narrow valleys where they're accessible to every kind of ambush. We do have to avoid that. We have to come up with a strategy that avoids the Russians' mistakes.

I think the American game plan is to use bombing to dislodge the Taliban, use the Northern Alliance to take Kabul and Mazar-e-Sharif and get a provisional government that will invite in the United Nations. That will then mean Muslim troops, people like the Turks, and then we don't have any U.S. ground troops at all. That's the scenario. The question is whether that's credible or not.

Do you believe that it is?

Is that reason to have ground troops there, for after the Taliban falls?

A short-term, high-intensity U.S. military ground presence that was chiefly concerned to smoke out terrorists in their caves, and then get the hell out and make way for peacekeepers, is a possible option. But it's not a quarter of a million troops.

Sen. Joseph Biden said that we're running the risk of looking like "high-tech bullies." Is there a perception problem? Might there be one if we do send in ground troops?

Yes, there is a perception problem, but I don't think that military strategy should be driven by perceptions. If Joe Biden is seriously saying that we should be air-dropping the 101st Airborne and ground assault troops across the Pakistani border, then he doesn't understand the extreme sensitivities of the Pakistanis.

That's another constraint that has to be borne in mind: All of the allies in the region don't want American ground troops. They will tip over to the other side if we do send them in. There are some diplomatic constraints that have to be observed. I'd rather be a high-tech bully than have no offensive military operation whatsoever.

Why are some of our allies in the region against ground troops?

They feel that they'll be colluding in an American imperial occupation and they don't want that.

So that could be another perception?

That's another perception that works on the other side and keeps us up in the air.

Has the bombing campaign been going on for a long time would you say? What's your sense of the time frame?

No, not especially. Military operators don't like restriking targets. They want to have credible military targets that actually have some point. My sense is that we're going to run out of targets fairly soon. The targets that make the most sense are the Taliban front-line positions and the caves where al-Qaida is holed up. The first set of targets are pretty easy to identify because we'll get spotters and laser designators and increasing accuracy as our special forces are able to bring the bombs onto the right targets. As for the second set of targets -- the bunkers, the holes, the caves -- it simply will not do to lay cluster bombs and heavy detonators across some large grid reference on a map. I've heard that they've figured out where bin Laden is between a 20-by-20 mile radius. Well, that's not nearly good enough. The distance has to be in 100 yards by 100 yards, or a mile by a mile or half a mile by a mile. If you start spraying the ordnance around just to get one person, the risk that you'll hit civilians becomes larger and larger. We need a break. We need to get lucky. They got lucky, we need to get lucky. That's what it's about.

Do you think we should discontinue our bombing campaign during Ramadan?

Don't see why we should. We've lost the friends in the Islamic world that we're going to lose. I think we should stop bombing when we have good military reason to do so -- when we have neutralized the objectives we're trying to strike, and not before.

In your book "Virtual War" you say that the contract of war hinges on the basic equality of moral risk: kill or be killed. How does that apply to this situation? How do terrorist strikes shake that contract, since we have suffered casualties in America?

In the Kosovo war, there was a vast assymetry of risk. All the risk was borne by the enemy. Our operators bore some risk but there were no fatalities. Now, we are in a different situation. We've had close to 6,000 fatalities, mostly civilian, we've been hit extremely hard, the balance has tipped back. I just don't believe that war is made moral by our death. The right way to do this is to minimize civilian casualties on the other side and minimize our own casualties to the maximum possible. The cutoff is at what point that strategy simply becomes incapable of securing our objectives, namely the fall of the Taliban, the consolidation of a government of national unity, the creation of a U.N. infrastructure and U.N. peacekeepers. I don't think that those are bad objectives.

The tide seems to be shifting on this, though.

Almost everybody's jumping off the train at the moment. There's a tremendous amount of defeatism around. I just don't think it's justified. What do they think war is? War is a scary, difficult business and victory goes to those who take the risks necessary to get the job done, but don't take stupid risks simply in order to prove some moral point.

One of the things that a British journalist suggested in his essay in Salon is that we'll have no right to talk about al-Qaida's courage if we continue to bomb from up high.

Yeah, but all that's just crap. It's not about giving anybody lectures on courage. It's not about courage. We were savagely attacked in an absolutely devastatingly effective military strike Sept. 11 -- all power, not to their courage, but to their military success. It was a brilliant operation in which they risked 19 operators, who died, but who secured their objectives. Now, we have to engage in military operations that are just as smart, just as efficient and just as effective as theirs. If being savagely attacked and having 6,000 civilian deaths doesn't give us the right to do what we have to do militarily, I simply don't know what does.