If you think the Postal Service had a hard time with the Elvis stamp, just wait until they get around to Michael Jackson. 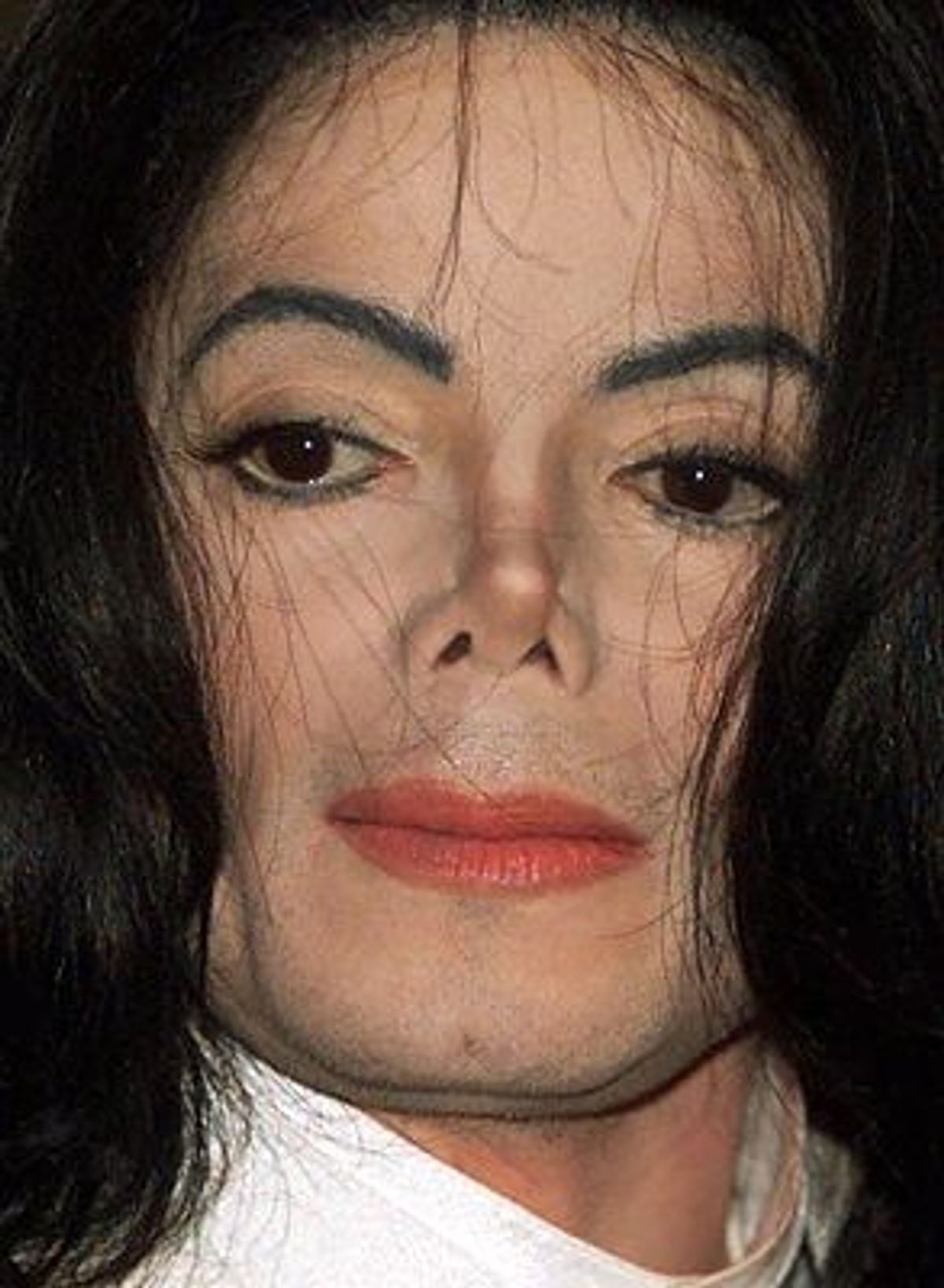 I'm not sure if I dreamed this or saw it on television. It was a downtown Manhattan bus, stopped on some side street, abandoned, dead in the middle of the road. I could see Michael Jackson's face on the side of the bus, but it was clouded by a thick coat of flinty, brown-white dust.

Real or imagined, I know I saw the image sometime after Sept. 11. The advertising for Michael Jackson's new album, the unfortunately titled "Invincible," was all over the place -- on phone booths, billboards and of course on the sides of buses. And if what I saw was true -- hell, even if it wasn't -- the image alone, in its fiery new context, seemed like some Tourette's burst of weird symbolism. Because we live in a strange time, when everything we see speaks of something else, something sinister. Before, a huge advertisement on the side of the bus -- they're called "skins" in the advertising business -- might have been just another big-budget broadside to sell records. Now it looks like another insult forced upon the world without care or research.

Michael peering out from under the dust is postmodern T.J. Eckleberg. He's the eyes and ears of a dirty world gone even more awful. For me, it asks one pair of questions: Is he judging us, or is he just completely doped up?

In my hometown, Philadelphia, the Jacko buses volley up and down our main drags, gleaming in the autumn sun as weirdly imposing as they were meant to be. More than once, I've been walking down the street with this friend or that, stopped dead in my tracks. "Have you seen his face lately?" I'd say. "It's like a death mask." My friend would stare at the bus, and then turn quiet as we walked through the office district, or Chinatown, the world bustling about two people paralyzed in thought by the strange lizardly gaze of Michael Jackson, King of Pop. Whatever that means.

If you turn on VH-1 these days, you're liable to see a whole bunch of things that should turn the stomach of even the strongest pop aesthete: Bono murdelyzing "What's Going On" with the help of Ja Rule or Justin Timberlake or whomever; Robert Downey Jr. lip-synching a new Elton John song, presented as a bona fide act of ars dramatis; and an episode of "Behind the Music" dedicated to the short, sad career of Blind Melon. But the strangest, most abandonedly fucked-up thing you will see on VH-1 -- or for that matter, anywhere on television -- is the movie in miniature that MJJ Productions has made to promote "You Rock My World," the first single on "Invincible."

The long-form video in length alone is meant to remind us of Jacko's "Thriller" glory days, when with John Landis, the KoP made the "Citizen Kane" of music videos. "You Rock My World" is very different.

As best I can tell, this is what happens: There is a girl, or money, or something that a noble private eye type (played by Jacko) and an incredulous Chris Tucker have tracked to a Casbah-type location. The Casbah looks like it might have been rejected by Duran Duran for the "Hungry Like the Wolf" video. Michael Madsen apparently works at or frequents the place, and the upstairs office -- any Casbah's heart of darkness -- is occupied by, get this, Marlon Brando! Brando apparently has the girl/thing in his possession, and is in no particular hurry to remit her/it to Jacko; he orders his goons on the singer, whereupon there is a bit of dialogue that goes something like this:

SLEAZY GOON: Is that all you got? Heh? (Mumbles.)

JACKO: (Motions a sort of "go screw yourself" gesture by sliding his hand up along his throat to his chin.)

SLEAZY GOON: You ain't got nothin'! You're nothin'!

JACKO: (Moving closer, in front of a posse we barely knew he had; stares into SLEAZY GOON's eyes.)

And then it's the same old thing: Jacko and his crew bust out a couple of "West Side Story" moves; then, apropos of nothing, Jacko yells, "HHHOOOHHHH!" The music comes in, and he grunts little Jacko puppy noises in a way that we perceive as musical.

It's true. In a long video in which he is the star, Michael wears a broad-brimmed hat, and a do-rag under that. The hat darkens his face in shadows for almost the entire song.

In 10 minutes plus, Michael Jackson's face is visible here for 15 seconds. And I swear, just the sight of it is enough to make you gasp -- not for the pop thrill, but for its freakish pall.

If Don DeLillo was right in saying that Mick Jagger's lips represented the anus of a culture, then what part of our society is the face of Michael Jackson? Because the truth is, there's not really much face left in Michael Jackson's face. But fossils of it remain all over pop culture.

Michael's face started out normal enough. Happen upon an old Jackson Five performance on television and it's easy to remember what a sweet, doughy little boy he once was. Then, decked out in full pimp regalia on "The Mike Douglas Show," 12-year-old Michael oozed soul. Eventually, Michael began sliding into his teens, which you always got the feeling that Michael and his handlers regarded as a descent -- that adulthood, no matter what Michael's fame and music might achieve, would permanently sour him, soil that grace that you hear on, say, the Jackson Five's reading of "Who's Loving You." (This would explain a lot about Michael as potential pederast and go a long way into making him the sad character we have of late simply inferred that he is.)

But even teenage Michael, even Studio 54 Michael, even "Off The Wall" Michael emitted a certain kind of celebrity grace that all but pointed to almost otherworldly greatness. Look at him in those old Studio 54 VIP room pictures! See how tacky and grotesque Andy and Liza look next to him? Pre-"Thriller" Michael exuded something very Christlike -- that weird sort of Gatsby beneficence. When he appeared in that sequined leotard in the video for "Rock With You" -- probably the last time we saw Michael's face in its most natural form -- he may have intended to inflict puppy love, but what he really did, his eyes never staring but penetrating for the odd nanosecond here and there, was hypnotize: Sometime between "Off the Wall" and "Thriller," Michael Jackson represented untrammeled possibility, America itself, taken to some kind of spiritual, Whitmanesque plane few of us have ever inhabited.

By the time "Thriller" had gone nuclear, however -- which seemed to be, for all intents and purposes, the Monday morning following his world-stopping debut of the Moonwalk -- something had gone terribly wrong, and Michael spent this era in earnest, really, trying to come up with anything to stop it. To perhaps take the Jesus analogy too far, what happened to Michael Jackson in the 1980s was what would have happened to Christ if everyone believed him.

It was all too much.

Michael had no crucifixion, no betrayal, no disbelievers in the '80s. But somewhere, deep down, he had to know he was no Christ child. Comeuppance was coming, and to dodge it, since it was as certain as rain, he'd have to delude himself into thinking that he could get away from it. He'd have to, bit by bit, shed his humanity.

And in the aftermath of "Thriller" -- after that visage, now morphing by the month into something very different, very anti-soul, very anti-rhythm and blues, after his face had been plastered onto every surface imaginable for causes serving himself and everyone and no one -- you could watch the humanity peel away like sunburned skin. Michael Jackson ceased to be an entertainer by trying to be the entertainer. His albums devolved into terse buzzwords: "Bad"; "Dangerous." Each one bore a more obvious marketing fiasco than the one that preceded it. They looked like desperate attempts for Michael Jackson to retain the most valuable commodity he ever had: that spark of lusty danger, that high croon of pop salvation, that thing that thrilled. Those eyes. That face.

Meanwhile, his head changed like a broken Stretch Armstrong. Lighter. Longer. Finally, plastic surgery whittled it into the shape we now recognize as nothing more and nothing less than sickness.

Is all this to lament the where and what that the face has become now, to show remorse over the way Michael Jackson has turned from a certain kind of uneasy harmlessness -- even a salve -- to something so patently harmful -- a manifestation of the darkness and slippery mutability of each man's soul once he realizes that anything is possible?

Not really. Consider this: The face of Michael Jackson is the natural correlative of the body of Elvis Presley -- an ambling, streaming comment on sadness and escapism. As Elvis' body mutated as he withdrew and became more desperate, so too did Michael's face warp and revolt as the very same things plagued him. Fame. Sexuality. Dried-up creativity. Ego. All of it.

It's a pop analogy that Michael might be flattered to consider. Still, it's relentlessly true.

Plainly, too much was given to -- and asked of -- Michael Jackson. In such a situation, not only will morality and creativity necessarily crumble, but so too will reality. We wonder about these people, we wonder what the hell they're thinking when they do the things they do: Michael Jackson, Howard Hughes, Marlon Brando -- people who are so adept at success that the only thing left to conquer is their own delusions. Should we really be surprised that that's the hardest part of all?