An interview with Carl Djerassi, the father of modern contraception 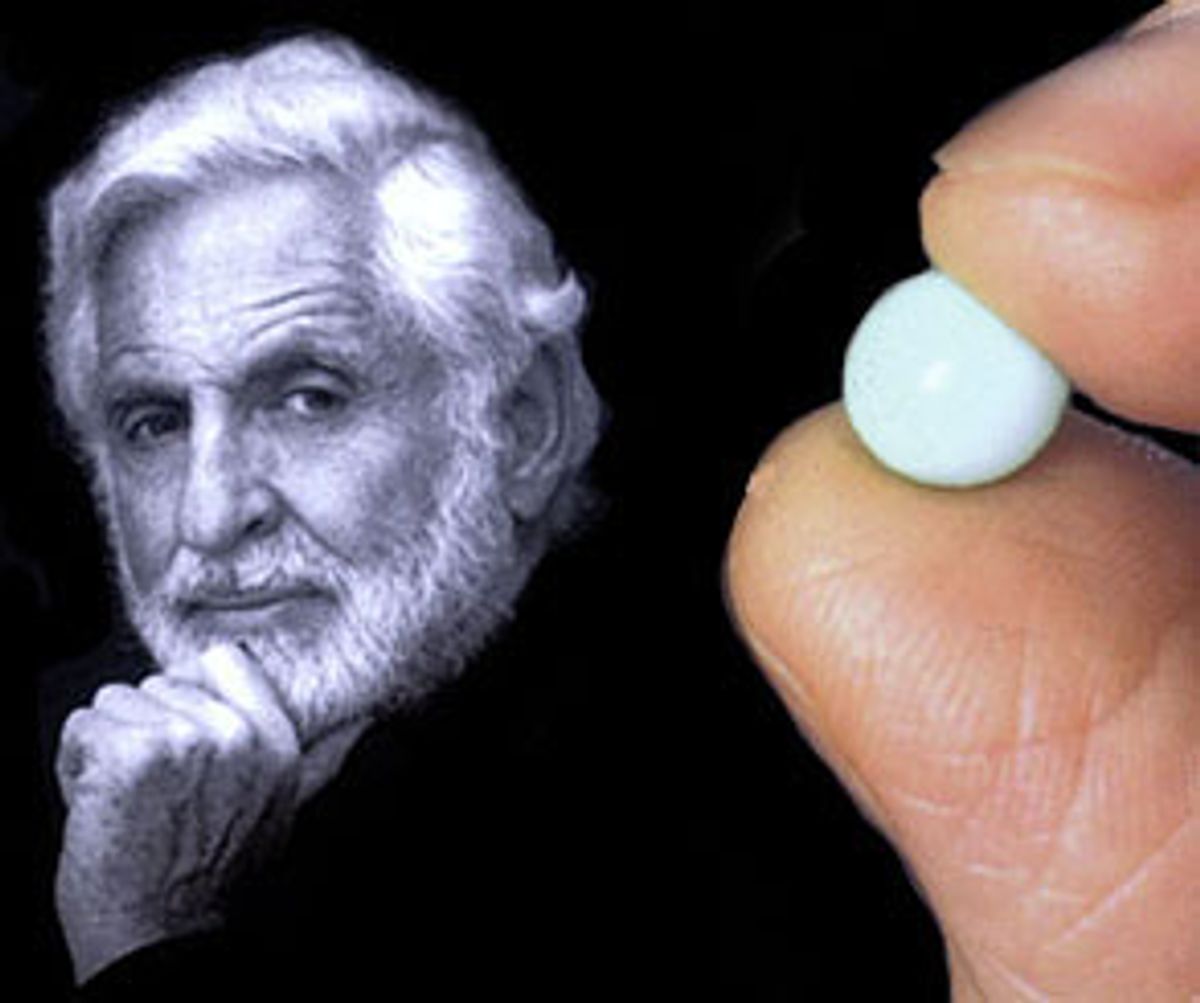 Mexico is the underbelly psyche of America -- a place under the volcano, a dangerous place populated by drug lords, whores and bullfighters. It's a place you go to disappear, as Ambrose Bierce and B. Traven did; a place where you shoot your wife in the head as a joke gone wrong, as expatriate writer William Burroughs did in Mexico City in September 1951. It was also in Mexico City, one month later, that Vienna-born chemist Carl Djerassi invented the birth control pill.

Djerassi doesn't see the connection between himself and Burroughs. It pisses him off.

"Can't we at least romanticize your years in Mexico?" I ask Djerassi.

"Yes," he says. "I romanticize them all the time, I think with justification. This was the first time and the last time when steroid chemistry was done in a Third World country where no research had been published before. I enjoyed Mexico enormously. I was young. I was -- what was I? -- I was 26 when I moved to Mexico City. I learned a new language. I became a collector of pre-Colombian art. I was fascinated by traveling in Mexico."

Djerassi was born in pre-World War II Vienna. His family fled to New York in 1938, and he graduated Phi Beta Kappa from Kenyon College in Ohio. His first job was as a junior chemist with a Swiss pharmaceutical company where he helped invent a powerful antihistamine called Pyribenzamine. He then scored a Ph.D. at the University of Wisconsin and drifted south to form a Mexico City chemical company called Syntex. The company's supreme achievement, the oral female contraceptive, would forever be called "the Pill" (or la Pilule, la Píldora, la Pillola, die Pille).

For many years, Djerassi assumed Aldous Huxley had coined the term in "Brave New World," but after much digging he discovered the moniker's source was a London police officer/journalist named Cecil Hewitt. Forty-some years later, the Pill's invention inspired the London Sunday Times Magazine to include Djerassi as one of "the Top Thirty Persons of the Millennium." In his new book, "The Man's Pill: Reflections on the 50th Birthday of the Pill," Djerassi notes his inclusion on this list vs. the omission of such historic personalities as Genghis Khan, Mahatma Gandhi and the Beatles.

"[My mention] is patently ludicrous by any criterion but one: as a surrogate for the Pill," he writes. He believes that his Pill is "one of the most monumental movements in recent times" because it separated "the coital act from conception." In his peculiar but enthralling book, Djerassi discusses his own experiences and misadventures in both activities.

He also writes about chemistry in prose that is as inspired as fellow scientist Thomas Pynchon's. Djerassi is less interesting when he writes about the writing life. Besides his scientific achievements (which include the invention of a glorified bug spray), Djerassi is a playwright and a novelist. He is married to Diane Middlebrook, professor of English at Stanford University. They live in San Francisco.

The invention of the Pill put Djerassi on Easy Street so he could also become a wealthy philanthropist of the arts. Like an intellectual Genghis Khan, Djerassi now wants to share with us the clarity of arrogant wisdom.

"I am an arrogant person," he admits in a thick accent during a phone interview. "I'm a very impatient person. It was tested the first time around when you asked, What are you doing now?' I said, Go to my Web site and read about it.' That's not nice necessarily. But I'm an honest person. Why should I pretend that I'm not arrogant when I am? The arrogance that I'm referring to is an intellectual arrogance. It is not just social arrogance by any means. It's related to my impatience. I don't like to spoon-feed people. I don't do it in my lectures. I don't do in my novels. I don't do it in my plays. This is a discussion we've had a number of times with an audience. Every one of my plays ends ambiguously. I feel very strongly that I should not provide answers. I should only ask the questions and make people think rather than brainwash them. I want people to think. If they don't, I get impatient."

Does your arrogance have anything to do with being Viennese?

[He laughs] If it is, I don't know. I think it has more to do with being Jewish.

Expound on your belief that young men should get vasectomies and thereafter totally separate sex from reproduction.

There are millions of men who have been vasectomized, but they are always middle-aged and already fathers. Young men do not have vasectomies. It has this image -- like it does something to your manhood. If you could have reversible vasectomy then of course it would be different, but we don't have reversible vasectomy yet. An alternative is to preserve one's sperm and then get sterilized. That's totality realistic because we know a great deal about sperm storage. It's very cheap. Vasectomy is very simple.

Aren't vasectomized men missing a profound sexual encounter if they don't have sex to conceive a child?

Every 24 hours there are 100 million acts of intercourse in the world. And these lead to about a million conceptions. Of a million, roughly half are unplanned. And 25 percent are unwanted. That is demonstrated quite easily because every 24 hours there are 150,000 abortions in the world. You see that a lot of pregnancies are completely unplanned. I myself had two children, and one was a complete accident. This was before the Pill existed. That was why I married my wife. Not that I did not love her, but I married her because she was pregnant. That was very common 50 years ago. My second child was a planned child in the context of "Let's have a second child." We didn't say, "Let's have it next month. Or half a year." So we didn't use contraception.

Wasn't it great having sex for both pleasure and reproduction?

In my case no. I never drew that distinction. I like sex, period. I don't need another excuse for it. I think people romanticize the act of conception. Obviously it means something to people, but generally it's a post-factor romanticization. If you have sex with one person once a month then you know exactly when pregnancy happened retrospectively. [Pause.] A mind-blowing orgasm. [Laughs.] Most people do not have the foggiest idea when they conceived. Great sex is based on what it is, the pleasure principle.

Why do you believe there will never be a male contraception pill?

The nature of the pharmaceutical industry. The only markets that interest them are the aging population in Western Europe, Japan and North America. Contraception is not on their radar -- Alzheimer's and cancer are. People who take drugs for these are willing to tolerate quite a number of side effects depending on the severity of the disease, whereas people who take contraceptives are not willing to tolerate any side effects. You're also talking about something that a man would take for many years. "If I take my pill for 20, 40 years, can I still have a child after that?" Well, you can't answer that by doing clinical experiments for one or two years. You have to do a large group of people for 10 years. The patent life of a compound only lasts for 20 years so you're going to cannibalize the position of your invention by doing this. That's another reason pharmaceutical companies won't touch a male contraceptive.

How did your work in birth control lead to inventing insect repellent?

We wanted to come up with something that wouldn't be a poison that would harm humans in higher doses. The real pill was based on a hint from biology. Progesterone namely. Women do not get pregnant during pregnancy. We tried to develop a compound that mimics that biological activity. Well, the same thing about insects. What we did was develop agents based on a hormone that exists in insects, but not higher species. Insects produce a hormone during their juvenile state that keeps them juvenile. Later on, insects produce another hormone that allows them to mature. We decided, "Why not use the juvenile hormone for insect control?" The insect won't get killed, but they can't reproduce. It would be like human birth control by stopping people from aging beyond puberty. Our approach was designed for insects that do their damage in their adult stage like flies, mosquitoes, fleas and cockroaches.

In the 1980s, many people romanticized tribal societies. No tribal society invented a birth control pill, did they?

You're completely wrong. For thousands of years in China and India and pre-Colombian Mexico [people used] hundreds and hundred of plants or indigenous medicine. The three most popular uses were to control fertility, or to promote fertility or [laughs] to cure stomach upsets. [Pause.] The ones that controlled fertility worked because the chemicals would cause in one way or another an abortion.

What is the response by scientists to your dramatic work?

It's mixed. One has to be honest about this. Scientists are a broader group than chemists. Chemists are my own tribe, so to speak. They are the most conservative, and read more than any of the others. Lots of them haven't read what I write and have only heard about it and consider it trivial. That's one segment. The second segment is impressed. The third segment is jealous. And the fourth is the most interesting -- the ones who read seriously and ask me, "Do you find it necessary to wash dirty lab coats in public?"

The thing about you I'm most impressed with is that you made Nixon's "enemies" list.

That's one of my biggest awards, I agree. Within a week or 10 days, I appeared at the White House and he gave me the Medal of Science for contraceptives. The San Francisco paper had a very amusing headline, "Nixon Gives Medal to Enemy.'"

This is a final question. Your book and Web site imply that you are a lady's man. Are you?

You're not going to get an answer from me. First of all, you have to define "lady's man" for me. And "lady's man" for many people invariably implies superficiality and exploitation. I don't consider myself an exploiter of women. Do I like women? Women are much more important to me than men. In my last 20, 30 years, I've hardly made any male friends, but made lots of new women friends. And friend is not just a surrogate for sexual partner. But the additional factor of sexual attraction -- [Pause.] I'm just an ordinary heterosexual person to whom the opposite sex applies, so the possibility let us say of sexual attraction, even confirmation, is an extra bonus in these relations. I will not admit to being a Casanova or Don Juan or someone just going around counting his female conquests.

I always thought a lady's man had a certain urbane wit.