"Harry Potter and the Sorcerer's Stone""

The long-awaited movie is faithful to J.K. Rowling's book, but the fantasy isn't very fantastic and the evil just isn't dark enough. 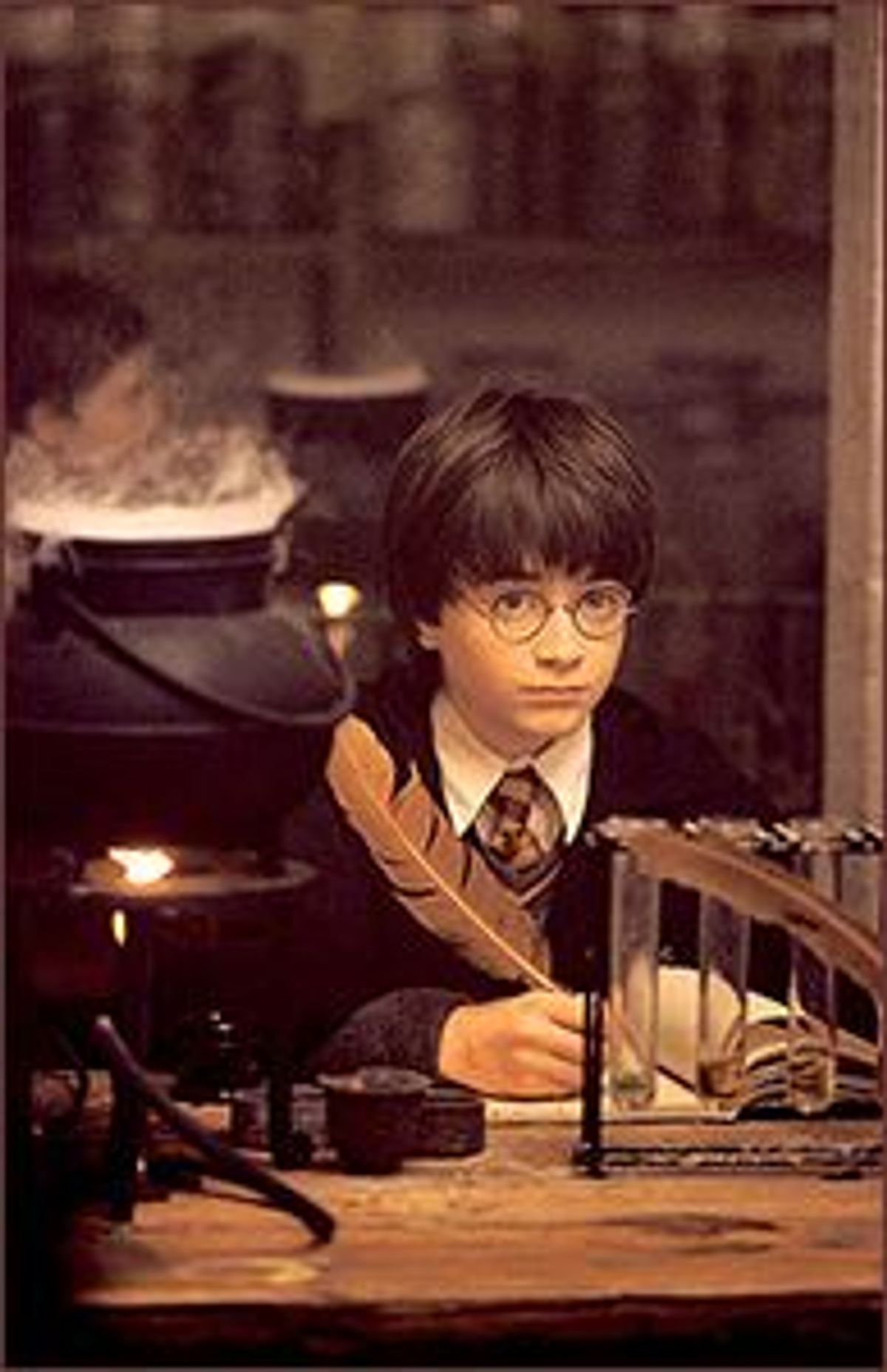 To be something more than escapism, fantasy depends on a vision of evil that is powerful, mysterious and in some sense compelling; it can be awe-inspiring, like Darth Vader or J.R.R. Tolkien's Sauron, or sexually alluring, like C.S. Lewis' White Witch. Consider Voldemort (I know, I shouldn't even use his name), the evil wizard who plays the Satan-Sauron role in J.K. Rowling's Harry Potter books. As the killer of Harry's parents and inflicter of the scar that marks Harry as special, Voldemort has a kind of claim on the precocious young wizard. We know perfectly well that Harry will never submit to Voldemort's dark powers -- such are the limits of Rowling's universe -- but there is still a special urgency, a subliminal tingle, to their encounters.

To my taste, the evil in Rowling's books is always a bit too constrained and contained, and the befuddled "muggles" of the ordinary grown-up world are too easily outfoxed. (Indeed, given the immense popularity of the Potter books among children and grown-ups around the globe, where exactly are true muggles to be found? Osama bin Laden and Pat Robertson, perhaps?) Compared to the theological and literary density of Tolkien and Lewis, both rooted in a tragic vision of human nature, Rowling's fairy-tale coming-of-age fantasies strike me as sweet but a little thin. I certainly don't begrudge any of her readers the immense joy they derive from her books, but I'm not all that interested. Go off and have your fun at Hogwarts; I'll be happier at home with the espresso-depresso crowd: Ingmar Bergman, Edgar Allan Poe, Kierkegaard and maybe a stack of "Swamp Thing" comics.

So unlike the Potter loyalists I have no investment in the purity or accuracy of Chris Columbus' film version of "Harry Potter and the Sorcerer's Stone," although it strikes me, in fact, as a faithful and appealing adaptation. As any reasonable person would have expected, it's a big and often sloppy Hollywood production with some bad computer graphics, a syrupy score from John Williams and a focus on storybook adventure rather than Rowling's oddball characters. Columbus and screenwriter Steve Kloves ("Wonder Boys") take Rowling's tame conception of evil and make it tamer still; when Voldemort finally makes an appearance, he looks like a crypt-monster left over from "The Mummy Returns."

On the other hand, I wasn't bored, except during Harry's Quidditch match, which bears a distinct resemblance to the pod-racing scene in "Star Wars Episode I: The Phantom Menace." Yes, Rowling's plot has been trimmed and condensed, but from my perspective that isn't necessarily a bad thing. Columbus and Kloves have distilled the book's quasi-eccentric charms into a family-friendly spectacle alive with color and incident. More than anything else, this "Harry Potter" is a droll Gothic set at a boarding school, with a fairy-tale beginning reminiscent of "Jane Eyre" and "Cinderella" and a special-effects climax in a "Romancing the Raiders of the Jedi" vein.

Columbus, who directed the first two "Home Alone" pictures and such other fare as "Mrs. Doubtfire" and "Stepmom," was viewed with considerable skepticism by many Potterites, especially those across the Atlantic. His ability with child actors is evident here, however, and he and Kloves have manfully resisted any impulses to Americanize the setting or the material. As played with the right tone of myopic bemusement by Daniel Radcliffe -- who would also be an ideal choice for the role of the young John Lennon -- Harry Potter is a distinctly English little boy. His childhood has of course been consigned to the Cupboard Below the Stairs in the home of his dreadful Uncle Vernon (Richard Griffiths) and Aunt Petunia (Fiona Shaw) in Little Whinging, Surrey. (One might compare Surrey to the middle-suburban zones of New Jersey or the San Fernando Valley in California, but in the British imagination it is perhaps less interesting than either).

Harry's aunt and uncle are more figures of fun than ogres; they continue to protest that there's no such thing as magic while owls by the score divebomb their house, bearing envelopes addressed to Harry by the hundreds. But Griffiths and Shaw prepare us for the film's principal grown-up-oriented treat, its plethora of delightful British character actors. Soon enough, the bearded, beefy Hagrid (Robbie Coltrane), sort of a Hell's Angel with a gooey center, is on the scene, kicking down the door and hand-delivering Harry's acceptance letter from Hogwarts School of Witchcraft and Wizardry.

Most of Columbus' film concerns Harry's career at Hogwarts, as of course it should. There he discovers that he is the scion of a famous wizard family and a natural at Quidditch, and embarks on heady adventures with two equally precocious schoolmates, a sly carrot-top named Ron (Rupert Grint) and the know-it-all and budding bombshell named Hermione (Emma Watson). They battle a stupid but dangerous mountain troll and the fearsome, slobbering three-headed monster dog named Fluffy. They encounter evidence that Voldemort, who kills Harry's parents in an exceptionally lame flashback, is mounting a comeback and wonder whether the sinister Professor Snape (played with fine dourness by Alan Rickman) may be covertly aiding him.

All this is fine and dandy; most viewers will hardly notice or care that "Harry Potter and the Sorcerer's Stone" gradually loses something as it goes along, something that might be called its mystical and emotional traction. The heart of Rowling's book lies in the wonder and delight of Harry's discovery that he really is someone special, despite the evidence of his life so far. In Kloves' screenplay, this transformation happens so quickly we barely notice it. After Hagrid takes Harry on his first thrilling visit to Diagon Alley, the secret Dickensian neighborhood of witches, wizards and goblins hidden in the heart of London, the drama and tension begin, ever so slowly, to ebb from the film.

As usual in contemporary fantasy, the reliance on special effects is part of the problem. There are lovely effects here and there, like the candles that float in midair, but Hogwarts, the film's principal setting, is a disorienting visual jumble. When the students row across a lake toward the school, in a night scene meant to impress us, it looks obviously and even self-consciously fake, like a two-dimensional miniature in the background of a 1930s Universal horror movie. On the inside, its roving bands of digital ghosts, moving staircases and living portraits have a jokey quality and only the faintest hint of darkness, like the Haunted House at Disneyland.

In the most densely computer-animated scenes, like the troll attack or the Quidditch game, there's a cartoonish quality that subtly undercuts Kloves' graceful screenplay and its well-modulated characters. Indeed, the film is so busy that two of Rowling's most beloved and august characters, Headmaster Albus Dumbledore (Richard Harris) and his shape-shifting sidekick, Professor Minerva McGonagall (Maggie Smith), become little more than background figures.

But for everything Columbus' film mishandles -- such as the conflict between the rival Hogwarts' "houses," upright Gryffindor and sleazy Slytherin, which will seem incomprehensible to any nonaficionados in the audience -- it remains a professional entertainment with just enough human moments to squeak by. Coltrane's performance as the noble if slightly buffoonish Hagrid is the standout among the sterling adult cast, and the Sorting Hat, a sort of garrulous talking napkin that assigns new Hogwartians to their houses, is a low-tech effect put to hilarious use. This version of the Potter saga is fun and harmless rather than memorable or imaginative. That's certainly no crime, and in this holiday season, above most others, viewers of all ages and dispositions will surely welcome a break from the darkness outside.