This time the germs are real

For sufferers of obsessive-compulsive disorder, a real-live anthrax scare can mean years of misery. 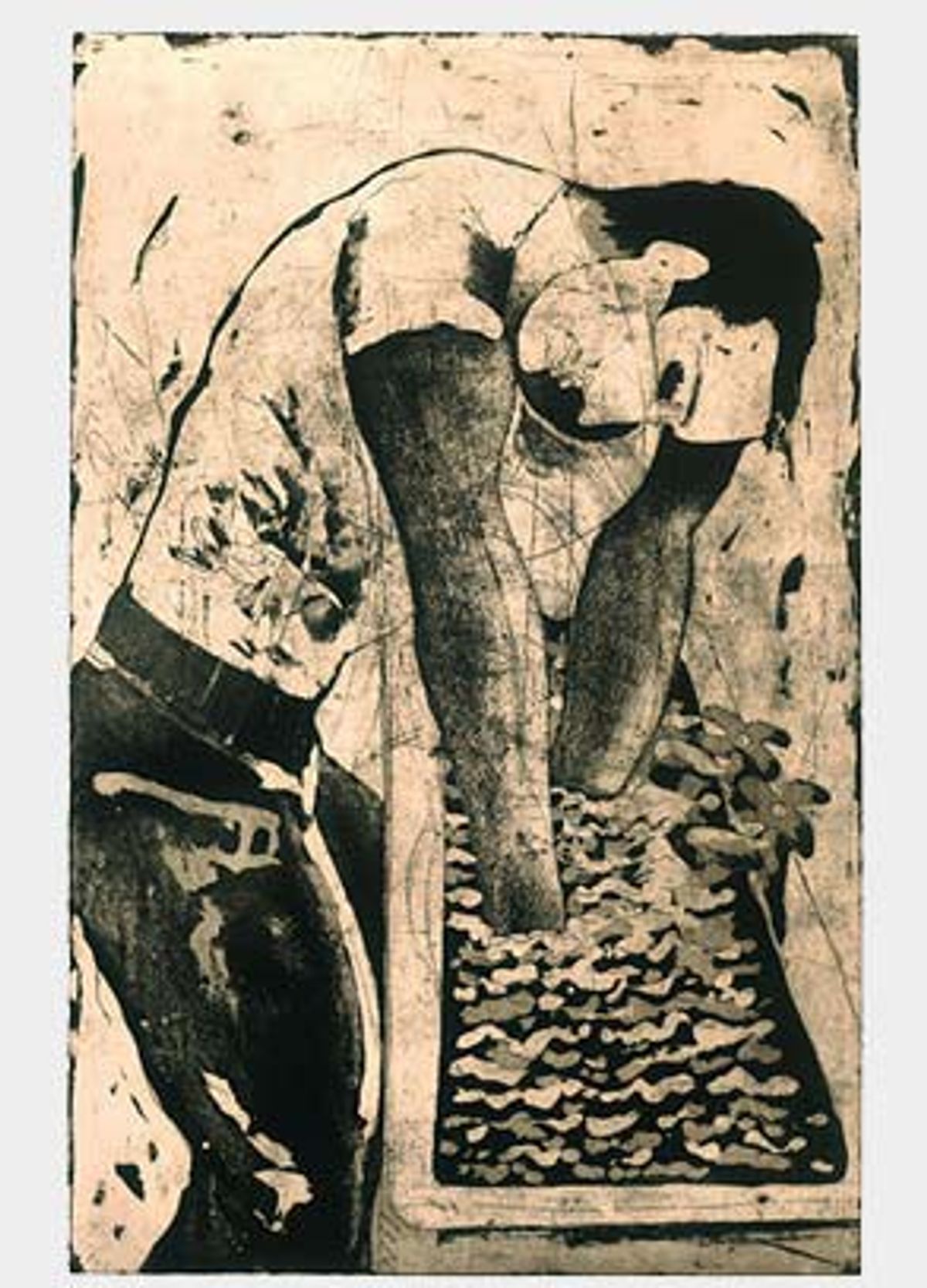 Matthew was doing OK before anthrax. That's not to say he was doing well; his disease kept him from working or going to school, and he didn't like to interact with people that much. But he could spend his days reading, visiting his grandmother, maybe going out to eat. He talked with a couple of friends by e-mail or phone, and checked in on an Internet support group for people with obsessive-compulsive disorder. He had good days.

Then came the spores. Matthew says it was the letter to Tom Daschle that set him off, leaving him afraid to touch things, to concentrate on a book, to leave the house. "God forbid I should open any mail," he says. "I don't do that, of course. I started wearing gloves. I started to not show my face outside."

Matthew is 21 years old, and his OCD has been largely untreated. He was diagnosed at 19, when fears of germs, rabid dogs and disease took over much of his thinking, but talking to a therapist about it proved embarrassing, and he stopped going. Then, in October, things got so bad he feared he might hurt himself. "I couldn't eat, I couldn't sleep," he says. He checked himself into a hospital, and began taking medication. Now back home with his family, he's going to give therapy another shot. But it's hard, he says, with the whole country afraid of anthrax.

"It just seems to be reinforcing my own paranoia caused by my condition," he says. "I know this isn't an end-of-the-world plague. But I never imagined that people would be able to get their hands on quantities of anthrax in this way. The government comes across as not having any idea how to stop it, or find out who did it. They don't seem much in control of the situation and that's very nerve-wracking."

Ida's having a slightly better time. She has medication that works well, so her germ phobia doesn't prevent her from working as a nurse. Her fears tend to focus more on food-borne illnesses. "My biggest fear is wondering what the bastards are going to do next," she says. "If things start happening with our food or water supply, I will be in deep trouble."

We've all been afraid since Sept. 11, even those without a clinical diagnosis. We don't sleep as well, we look twice at a pile of spilled sugar on a cafe table, we avoid airplanes. New prescriptions for the anti-anxiety drug Ativan are up 19 percent in New York alone compared to this time last year, according to NCDHealth, a healthcare research firm. Xanax is up 22 percent -- a city's little helper.

But for people like Matthew, who came to this national paranoia party already equipped with their own hair-trigger responses to germs, or to bombs, or to the mail itself, the terrorism has taken root deepest, leaving them wondering what to do when the world is suddenly backing them up on their fears. The postmaster general himself said it wouldn't hurt to wash your hands after touching the mail. We still don't know how Kathy Nguyen contracted anthrax. In OCD support groups on the Web, people are trying to sort it out.

"I don't believe it is [my] OCD demons that say there might be anthrax spores on my paper," one woman writes. "I think it is a very healthy and aware mind that makes the connections."

Another writes, "I feel like I am in a box, and in each corner is something evil. My son has strep throat and I am searching my memory making sure that there were no powdery substances in any mail. I feel like I can't live normally anymore. Or as normal as an OCD sufferer can live." If old reassurances have been replaced by new threats, how are OCD sufferers like Matthew to cope?

Most people with OCD are not obsessed with anthrax, and most of them aren't going to begin washing their hands for hours on end. "The symptoms of OCD are not based in reality," says Dr. Ben Greenberg, a psychiatrist and director of the OCD Clinic at Butler Hospital at Brown University. "They're inappropriate responses to imagined threats. Even though they can be triggered by things in the real world, they're internally generated." Which means that people who weren't afraid of germs before aren't necessarily likely to start now.

But germ phobias do transmute, from fear of one disease to another. Fifteen years ago, OCD sufferers didn't think about AIDS. Today, it's one of the more common germ phobias. "If we were living in the Middle Ages, and someone had OCD, the fear would be of the Bubonic plague," says Patricia Perkins-Doyle, executive director of the Obsessive Compulsive Foundation. "The content of OCD reflects certain fears that are prevalent in the society. So far people haven't picked up the anthrax as their primary fear. But it always takes time. It may take six to nine months before people start incorporating anthrax into their contamination fears."

Obsessive-compulsive disorder takes many forms besides contamination phobias. Often called the "What if?" disease -- "What if I ran over the cat when I was backing up? Forgot to turn the gas off? Sinned? Caught rabies?" -- it traps people in a pattern of repetitive thoughts and behaviors that they may know are senseless, but feel powerless to stop. It is more common than schizophrenia, bipolar disorder or panic disorder -- approximately 3.3 million Americans are thought to have it -- yet it doesn't get the attention, or the public understanding, other diseases do.

This makes life doubly difficult for OCD sufferers. How do you explain that you're obsessed with religion and sin, always on the lookout for infractions, and compulsively performing penitential rites? Or that you're late to work because you couldn't stop checking the stove? Or you're so afraid of contamination by germs that you wash your hands with alcohol or soap and scalding water until the skin is cracked?

"OCD is a dramatic overamplification of a real threat," says Dr. Xavier Amador, director of psychology at the New York State Psychiatric Institute. "There is a real threat -- if you don't ever wash your hands, you could get sick -- but it's like the volume control of the fear system is just cranked up. And it gets attached to one thing or two things that really pose very little actual threat."

No one knows exactly what causes OCD, though current thinking blames an interaction between neurobiological vulnerability and environmental influences. When it comes to treatment, behavior therapy and medication work much better than psychoanalysis, which takes the wind out the old theory that OCD is caused by an overzealous potty trainer, a neatnik mother or a lack of will.

Some psychologists look at OCD as simply the extreme form of normal behavior -- the so-called "Spectrum Theory." It's a controversial idea, particularly for those who believe that mental illness is the result of physiological glitches in the brain. After all, if the brain is diseased, then it doesn't work the same way as a healthy brain, and where's the "spectrum" in that? But it's a common enough theory to be familiar to most undergraduate psychology majors, and it gives philosophers and psychologists plenty of meat to chew on: Are self-described "neat freaks" sitting across the spectrum from compulsive hand-washers? If you reflexively hold your breath when you open the mailbox, are you a healthy person seeing the world through OCD goggles?

"The whole society, to a certain extent, is reacting in an OCD manner, in that there is a terrorist attack and then an anthrax attack, so therefore buying the gas masks and the antibiotics seems rational," Perkins-Doyle says. "OCD is all about the fear of uncertainty, and people who have it are endlessly trying to find that thing that's going to give them some certainty. Now, the whole society is in that state. Everyone is living with same 'What if?'"

For most of us, our psyches will eventually contain the threat and the daily anthrax fears will abate -- we've already begun to see this happen in recent days. Not so for OCD sufferers, who will continue to struggle with their particular fears long after the anthrax scare is over.

Still, there's at least one bright spot in the current situation. "One of the positives for people with OCD is they found out they're just as resilient, if not more so, than others around them," Perkins-Doyle says. "Because in a sense, they've already been through this. This is a way is proving to themselves that they're stronger than they thought they were."

Dr. Greenburg agrees. "Most of my OCD patients, and I've seen quite a few, have surprised themselves with how well they've done," he says. "Even those with contamination phobias. If there is a real crisis, people with anxiety disorders often do extremely well, because the symptoms of OCD are not based in reality. And it's bringing to their attention something that is probably unfamiliar: the idea that everyone has insecurities."

Matthew hasn't known much in the way of reassurance lately, but he does say it makes him feel a little less isolated to know that he's not the only one who's afraid. "I've always thought that OCD was an extreme form of irrational worries. I think everyone has them to some degree. People like me are just far more extreme."

Amy Traverso is a writer and editor living in Boston.