Martin Lawrence is back in a painfully obvious, groaningly uplifting medieval comedy. 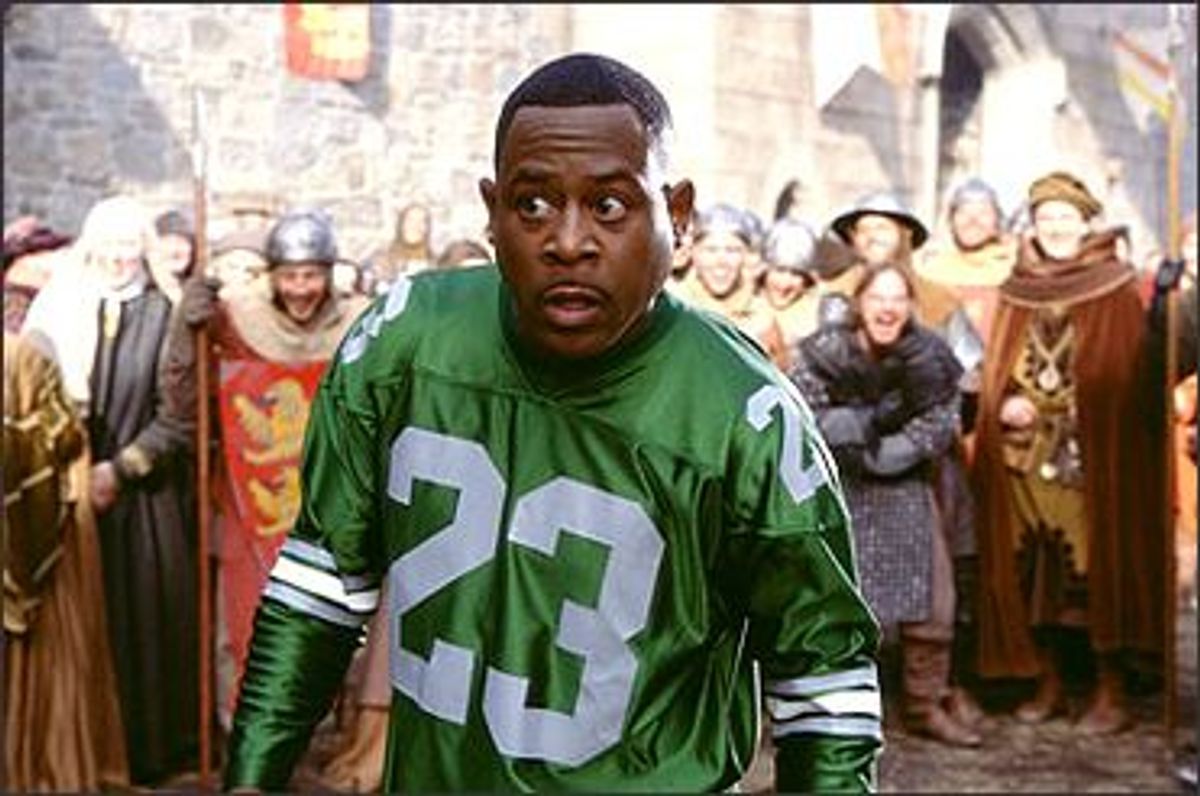 At the very least, couldn't the latest Martin Lawrence comedy, "Black Knight," have had a snappier title -- "A Compton Nigga in King Arthur's Court," perhaps? As it is, the movie has about as much swagger as its bland and basic title.

Lawrence plays Jamal, a disgruntled medieval-theme-park worker from inner-city Los Angeles, who, after falling into the moat at his place of employment, suddenly finds himself transported to 13th century England. There he lands right in the middle of a plot to murder the king; he also falls in love with the foxy maiden Victoria (Marsha Thomason), befriends the boozy, disgraced, reclusive knight Knolte (Tom Wilkinson) and stands up to the treacherous Percival (Vincent Regan), who resembles an evil Bob Goulet. Now that's scary.

Too bad it's not so funny. Almost every gag in "Black Knight" feels forced and contrived, as if the movie is desperate to squeeze laughs out of us. "Whatcha been eating, spoiled nachos?" Jamal asks Knolte, whom he mistakes for a garden-variety homeless dude, when he gets a whiff of his breath. Lawrence's timing isn't bad, but he has an unfortunate habit of making almost every joke sound thunderously obvious. And with his easy smile and eagerly friendly demeanor, he walks a fine line between being ingratiating and appealing.

"Black Knight" has the further misfortune to be groaningly uplifting. It's not enough for Jamal to travel back in time and do battle with primitive toilet facilities and encounter royal musicians who haven't yet been turned on to Sly and the Family Stone -- he has to do a bunch of good deeds, too. The tyrannical king oppresses his subjects; a small group of them hope to overthrow him and restore the more kindly queen, who has been deposed. "Here's what I'm saying," he addresses the depressed rabble. "Your life is shitty. And I know because I've been there." That sets the stage for many a heroic deed, including restoring dignity to Knolte and presenting him with a new pair of sneakers, which make him much faster and lighter on his feet than his dopey old knight shoes.

Director Gil Junger, who previously gave us the appealing teen comedy "10 Things I Hate About You," can't keep the movie's jokes in the air -- too many of them fall to the ground with a soft thud, although a tiny portion of them do manage to fly. When Jamal earnestly tells Victoria that he'd go to the end of the Earth for her, she brightens: "That's only six miles from here!"

But mostly, "Black Knight" is numbingly plodding, and it also does an admirable job of hiding the talents of one very capable actor. Tom Wilkinson, as Knolte, doesn't have much to do except stagger about when inebriated and strut when his confidence has been restored. It's hard to believe this is the same actor who gives such a delicate and unsettling performance in Todd Field's shivery drama "In the Bedroom." (I didn't realize it was Wilkinson until I saw his name in the credits; he's disguised by shaggy facial hair.)

Wilkinson isn't bad in "Black Knight"; it's just that he has very little to do. Then again, all actors, even terrific ones, have to keep working in order to make dough. Michael Caine, a wonderful actor who's starred in his share of stinkers, had the best line on that angle of the profession: When asked how he could stoop to starring in a turd like "Jaws: The Revenge," he replied, "I have never seen it, but by all accounts it is terrible. However, I have seen the house that it built, and it is terrific." You can only hope that "Black Knight" builds Wilkinson a very nice house -- or at least a fetching sun porch.