This brisk thriller overcomes its slick style with exciting espionage -- even if Brad Pitt and Robert Redford are all wrong. 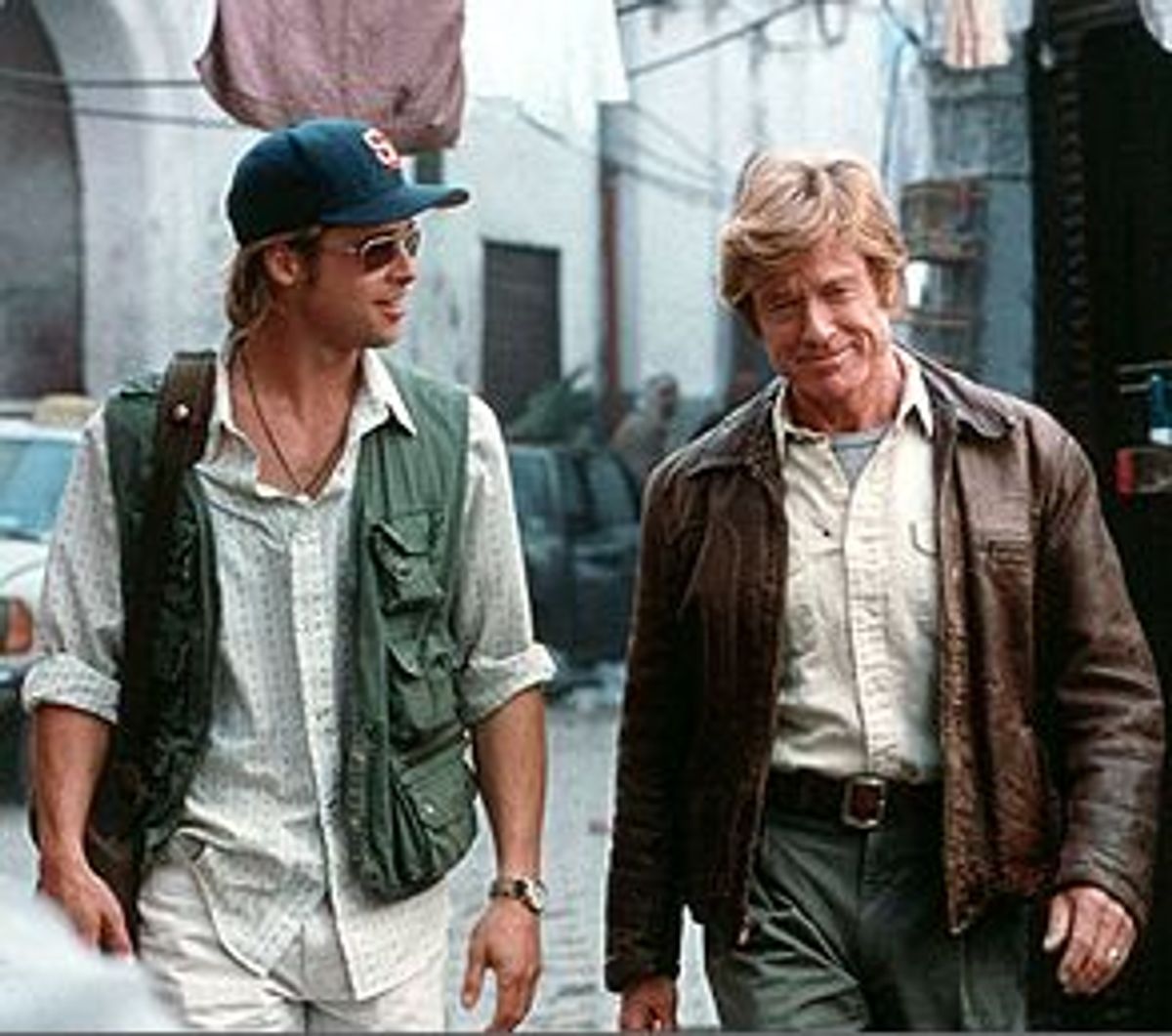 There's plenty wrong with "Spy Game." The stars -- Robert Redford as a CIA caseworker about to retire, and Brad Pitt as his protégé, scheduled for execution in a Chinese prison -- don't have the authority to carry the moral weight the script intends. And the director, Tony Scott, uses a souped-up visual style (typified by the black-and-white freeze frames with legends bearing the time that punctuate the action as a device to count down the 24 hours in which the movie takes place) to disguise the fact that "Spy Game" is essentially all flashback and exposition. And the movie takes itself way too seriously for a cloak-and-dagger entertainment.

The good news is that "Spy Game" still manages to be entertaining and reasonably exciting. Scott's style may be slick and tricky but, if this and his last film, "Enemy of the State," are any indication, he's lost the glossy sadism that characterized his previous work. (I left the horrendously violent "True Romance" not knowing what I needed more: a shower or a trip to the emergency ward.) Scott seems to have learned that providing thrills isn't the same thing as working an audience over. We could probably have all lived without the sequence where a suicide bomber blows up an apartment building, but Scott doesn't linger on the blast or the aftermath. He's still a long way from having anything like a personality as a director, but there's some efficiency and craft to his impersonal technique. Nowhere is that more obvious than in the movie's opening, with Pitt posing as an aid worker to break an inmate out of a Chinese prison. Fast and tense, nearly wordless, and tightly edited, it's a hell of a good start.

"Enemy of the State" worked because Scott soft-pedaled the political conspiracy material and treated the movie as a pop thriller. "Spy Game" wants to be both a high-powered star blockbuster and to venture credibly into John le Carré's territory and the author's essentially realistic take on espionage and the moral compromises it entails. In flashbacks we see Redford train Pitt as a CIA agent, riding roughshod over the young man's moral qualms about the innocents who get hurt in the course of the Agency's operations. Redford is meant to be the pragmatic professional for whom the ends justify the means, Pitt the all-American do-gooder who can't bear the idea that his job means sacrificing the people he's supposed to help.

We watch the tension between their two approaches play out in flashbacks taking place in Vietnam, East Berlin, Beirut. In the framing story, set in 1991, Pitt is apprehended in the midst of that jailbreak and sentenced to be executed. The CIA is willing to keep the lid on his capture and allow him to be killed so as not to jeopardize upcoming trade talks between China and the U.S. Redford, long estranged from his protégé, is called in on the day he's set to retire to provide information on Pitt. When he realizes that Pitt is about to become a sacrificial lamb, he sets out to save him, using his training to delude the Agency spooks keeping tabs on him.

Nothing in "Spy Game" matches the charge of the opening, but the various flashbacks are swiftly paced, and Scott maintains a nice tension as Redford tries to stay ahead of his CIA interrogators. The script, by Michael Frost Beckner and David Arata, is meant to be Redford's reckoning with the moral expediency he had always championed as just part of the job -- and it calls on his character to be selfless in order to save the young agent who couldn't stomach that expediency. But selflessness doesn't look natural on Robert Redford, who's far too self-absorbed and narcissistic a screen presence. The mantle of conscience looks unnatural on Brad Pitt as well. As always, he seems to have nothing going on beneath the surface. When a man recruited for a mission asks Pitt if it hurts to take a human life, there's no remorse or bitterness or guilt in Pitt when he tells the man "yes." He might as well be saying, "No pain, no gain."

Still, "Spy Game" is one of Redford's more enjoyable performances. One thing he has always been adept at is a brand of sarcasm that masks itself as straight talk from a straight guy. When someone looks, as Redford has over the course of his career, like the captain of the track team, or the junior senator, or a successful businessman, you tend to expect blandness every time he opens his mouth. And in most of his roles, carefully chosen (and, reportedly, occasionally retooled) so Redford never comes off as unsympathetic, he's been happy to oblige. In "Spy Game," he's playing a character who is revealed as more of a snake as the movie proceeds. And he makes his usual self-involvement work for the role.

If Scott or Redford had the sensibility to probe any deeper, "Spy Game" might have explored the irony of the character outwitting his CIA handlers as much to stroke his own ego as to save a fellow agent. It only touches on that lightly. But the fun of watching Redford here is in seeing him dissemble while keeping his straight-arrow veneer. He's playing an intelligence flunky as a put-on artist, and some of his line readings have a bite that hits you on the rebound.

Neither Redford nor Pitt, nor the other men in the cast -- Stephen Dillane as the weaselly agent determined to catch Redford, and Larry Bryggman, as appropriately bland and blobby as any federal functionary you see on CNN -- provide much of an emotional connection for the audience here. That falls to the women in the cast, Marianne Jean-Baptiste (the black daughter in "Secrets and Lies") with her sad, seen-it-all countenance that opens completely to the camera and her bourbon and sugar voice, and Catherine McCormack, who has a delicate tenseness as the aid worker Pitt falls for. McCormack doesn't get to show off the comic curlicues or flinty sexual presence she's displayed in David Kane's comedies "This Year's Love" and "Born Romantic," but she humanizes the movie's anonymous professionalism. And Charlotte Rampling's brittle elegance nearly undermines Redford completely in her cameo as his former flame. Redford is actually eight years older than Rampling but next to her he looks hopelessly callow, like one of the Hardy Boys being propositioned by Mata Hari.

I would venture to guess that one of the reasons Redford took this role is that it suited his politics. "Spy Game" doesn't have the depth or seriousness it's so obviously trying for, the sort that lifts spy stories to a level of moral and political commentary. What's striking about it is that it's a movie so out of synch with the prevailing public mood. Basically, "Spy Game" suggests that the intelligence community's willingness to sacrifice innocents to its cause is fundamentally undemocratic. (In a nod to Redford's previous role in "Three Days of the Condor" as an intelligence agent who discovers the murderousness of the Agency, he even wears a similar herringbone sports jacket.)

What "Spy Game" lacks is the courage to explore when those sacrifices become necessary. In the wake of the September attacks, TV was full of one expert after another talking about how American intelligence had gutted manpower in favor of technology. And the fact that we had no inkling of the attacks before they happened would seem to bear that out. What nobody was talking about were the reasons the intelligence community took that direction: the public's justifiable outrage over the 1970s revelations of the Senate's Church Committee about just what assassinations and coups the CIA had deemed "necessary" to the safety of America. The victims in New York, Washington and Pennsylvania weren't even cold when Tom Clancy appeared on CNN to tell anchor Judy Woodruff that if the liberal media hadn't raised such a hue and cry, then maybe intelligence could have done its job and these attacks wouldn't have happened. Clancy's bloated smugness couldn't match the obscenity of the images from the crash sites, but it was obscene enough to see someone already converting the dead to political capital.

And of course one of the most horrendous things we've learned is that, to some extent, we do have to accept that, where intelligence is concerned, what's necessary isn't always good, and that clean choices aren't always possible. (Or, to borrow a line from a Van Halen video, "Right now our government is doing things we think only other countries do.") If "Spy Game" had come out four or five months ago, I'd have less trouble seconding what it's saying, because of course we've all seen the horrors wrought by backroom spooks ready to decide what's in America's best interests. But the movie catches us at a time when our naive faith in American exceptionalism ("it could never happen here") has been shattered, and at a time when, no doubt, unsavory, immoral, vile things will be done to ensure our freedom. And I'd be lying if I said I'd rather not have those things carried out if it will prevent another Sept. 11. What "Spy Game" is saying isn't wrong -- it's just no longer possible (if it ever was) to see it as a complete discussion of the issue. It presents a side of the argument that should be heard (and really isn't going to be heard). That its view can't be either dismissed or endorsed completely makes the movie an oddity: a popcorn entertainment that, instead of escape, leaves you with nagging, unresolvable questions.