What's wrong with the Strokes?

They're tough and cool, have catchy songs and a great look. Why do people hate them? 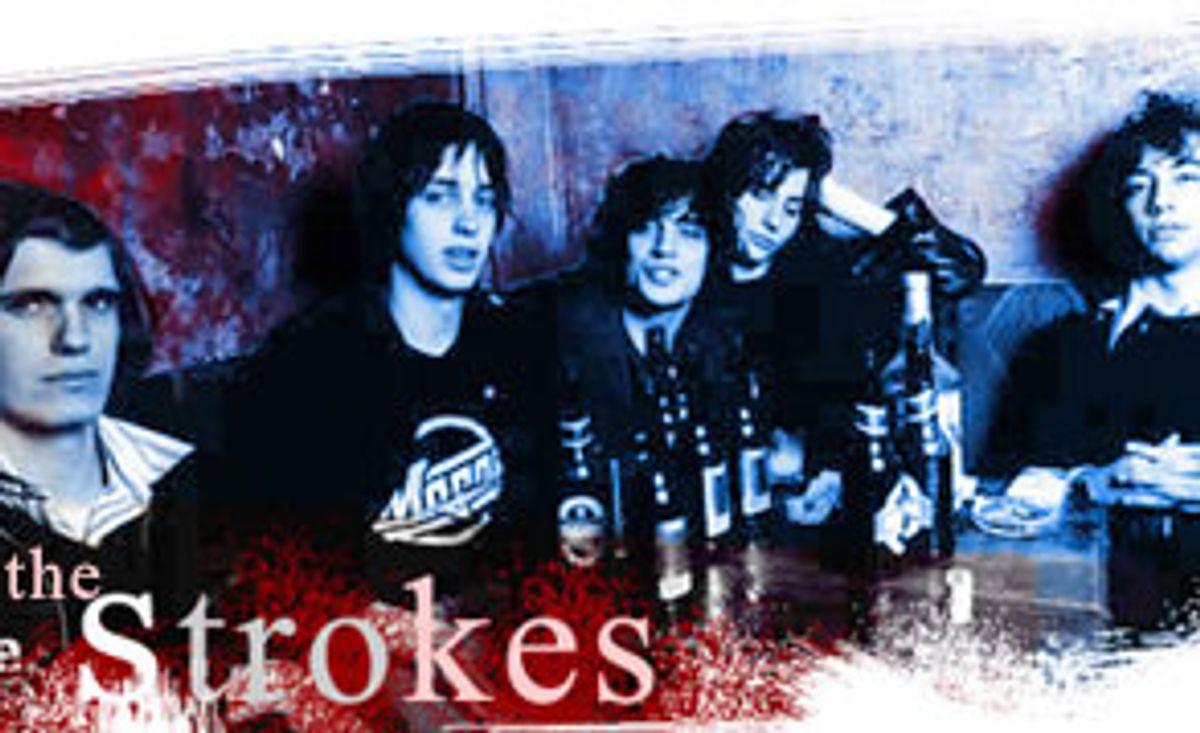 The facts on New York rock 'n' roll band the Strokes are pretty straightforward. There are five guys, all in their early 20s, in the band: frontman Julian Casablancas, guitarists Albert Hammond Jr. and Nick Valensi, drummer Fabrizio Moretti and bassist Nikolai Fraiture. Their manager is Ryan Gentles, a well-connected former booker for New York's Mercury Lounge. After playing music together casually for a couple of years, they parlayed opening gigs for the Doves and Guided by Voices into their own headlining tours. The band was the focus of a bidding war and was signed to a major label before its debut three-song EP, "The Modern Age," was released on Rough Trade, the British indie label, in January. The band's first full album, "Is This It," came out on RCA Oct. 9.

But those simple facts do not begin to describe the Strokes. They say nothing about the unusual range war being fought over the band behind the scenes -- an MTV "buzzworthy" video, sold-out shows, unceasing hype from the British press and adoring fans faced off against sneers on industry online bulletin boards and aggressive detractors.

The Strokes' sound is a lean and lithe mélange of Television, Blondie and the Velvet Underground: plain, tough vocals, straightforward guitars, steady rhythms and the casual art-pop meets rock 'n' roll attitude of those bands. The lyrics on "Is This It" are a push and pull of desire and detachment, with Casablancas asking girls if he can stay the night at their apartments and then saying he's only gonna stay a little while because he's "way too tired." On record, the frontman is the embodiment of the frustrating lover, the guy who calls all the shots, demanding one moment and noncommittal the next.

But if Casablancas presents himself as a little emotionally murky at the mike, the Strokes' aesthetic for presenting their work is clean and straightforward. The simple video for the song "Last Nite" shows the band playing the song on a well-lit stage set, with no lip-synching, no special effects, no staged audience, just a seemingly live performance caught on film.

In the indie world, bands are expected to be cool and credible, with a presumed DIY aesthetic and an abhorrence for major label hype. If they're not, they've crossed to the other side, where the major-label machine of marketing and promotions bashes the audience over the head with songs, press and videos.

When the Bay Area punk band Green Day first released "Dookie" on major label Reprise in 1994, they were slammed by the punk community for leaving their little label Lookout behind. El Paso emo rockers At the Drive In had a difficult ascension as they segued from being an indie favorite to signing with Virgin; the group ultimately split up this past March after spending seven years and three albums together. Compared to the Strokes, though, Green Day had two albums in their pocket when they hit the major labels, and At the Drive In had three albums out before signing with Virgin.

The Strokes, by contrast, signed with RCA, home to Christina Aguilera, the Foo Fighters and the Dave Matthews Band, before releasing a debut record. The only time the Strokes were truly an "indie band" themselves was when they were an unsigned act.

But if there's nothing flashy about the Strokes, why are they getting so much ink? Suspicious critics have been scrambling to come up with their own ideas.

The band has some interesting friends. Rolling Stone has never been a magazine that has gone to great lengths to champion the indie cause. But a few months ago, the magazine called them "Manhattan's first big rock 'n' roll thrill of the year" one month and "the cool next big thing" and "New York City's best young rock band" the next -- all before the band had even released a proper album.

The father of frontman Julian Casablancas, John Casablancas, is the owner of a successful modeling agency and a chain of modeling schools; some say the elder Casablancas gave his son entré into the fast lane. Guitarist Albert Hammond Jr. has a famous relation, too: his father, a singer-songwriter who had a run of schlock hits in the 1970s (notably "It Never Rains in Southern California") before becoming a dependable MOR songwriter. (Among other things, Hammond Sr. is the co-writer of "To All the Girls I've Loved Before.") The band had a predictably moneyed upbringing -- three of the members met at a private prep school in Manhattan called the Dwight School, and Casablancas and Hammond Jr. met at a Swiss boarding school.

England picked up on the band first. While bands that have been gigging for years dream of someday making it overseas, the Strokes sold out tours across England after playing in New York for a year and a half, in part because one of England's biggest music magazines, NME, made it clear that it felt the band will bring a revolution to rock 'n' roll. When the single "Hard to Explain" was released in England, NME reviewer Victoria Segal wrote, "This second single from the Strokes is almost ludicrously great, a record that generates genuine scalp-crackling excitement, a comet-rare synthesis of form, content, attitude and hair." NME.com ran almost weekly news items about the Strokes' minor medical problems, celebrity fans and choices for singles and album covers. U.K. culture magazine the Face ran a large spread on the Strokes back in the spring, when the band's three-song EP was only available to British readers as an import.

In response to the media hype, Strokes followers gathered in two opposing camps. On one side are people who think the Strokes are a refreshing alternative to the hard rock/sugar pop dichotomy currently offered by the major labels, people who want their music tougher than Britney Spears but a little less sociopathic than Limp Bizkit.

Then there are those who accuse the band of earning too much talk from too little talent, taking the spotlight away from bands who've worked longer and harder at making music. The New York Press recently called the Strokes "the best overhyped local band ... There are plenty of other bands in New York who are more deserving of hype, and many more who have paid their dues."

One of the most entertaining places for the Strokes' detractors has undoubtedly been industry gossip site the Velvet Rope. The posts about the Strokes started innocently enough back in February, with simple statements praising the band's music.

By March, though, watching the band get flown up the rock 'n' roll flagpole started getting too irritating for some Velvet Ropers, who, instead of simply ignoring the band, attempted to call out their every perceived fault. Velvet Rope posters have repeatedly accused the Strokes of being "too polished," "too calculating," "starting from third base" and being rip-off artists who should never be spoken about in the same sentence as the great New York acts of the '60s and '70s. New Strokes postings still appear on the site daily, a mix of intelligent debate, grade-school name calling and downright cattiness about predicting when the band's good fortune will fall from the Billboard charts.

That the Strokes are getting media attention should not, on its face, be the main reason to love or hate the band. But even music purists have a tough time closing their eyes to hype, and the Strokes themselves are not blameless in creating an image for themselves. Singer Julian Casablancas is not only a noncommittal, take 'em or leave 'em slacker in his lyrics, he also plays at being combative during the band's live act. At a recent show at the San Francisco Fillmore, he spat out that there would be "no fucking encore" -- like he was doing the audience a favor by being up there at all. A couple of weeks before, the band had pulled a song called "New York City Cops" off its debut album -- they announced that the line "New York City cops ain't too smart" was inappropriate after the terror attacks of Sept. 11. That night, the band played it, as the song was just another song on the set list.

The Strokes have a sense of humor about their media image, though. When I interviewed the band back in August, Nikolai Fraiture and Fabrizio Moretti shared some of their favorite rumors batting around the mill: that the Strokes were started by Casablancas' father; that they all came from a modeling agency; they're a fake band that only goes on photo shoots, but doesn't actually play music -- even that Casablancas was the little kid in the movie "Big."

Casablancas knows the hype surrounding the band has always been double-edged, though. "People say, 'I see you in all these magazines but I've never heard you,' and that blows," he told me, frustrated. "I just want people to hear the music and decide for themselves what they think. I don't think people like having shit shoved down their throats. It's not like we're not doing that, the [press is] doing that, and we're saying in interviews that we're just trying to play music. I want people to hear us, but I'm so confused about [the press]. So I just go with the flow and hopefully later on I'll know how to deal with it."

The conversation is almost enough to make you feel some sympathy for the band. But turn away from the press and the Internet discussions and focus on the Strokes' original purpose -- to play music -- and the support only seems to be getting stronger. Courtney Love reportedly debuted a song she wrote about Casablancas called "But Julian I'm a Little Older Than You" at a recently show in Ventura. The Strokes are still selling out shows across the country, playing for packed auditoriums of kids who learned the lyrics from the import version of "Is This It" back in the spring, and the kids who listened to the band once on some commercial alt-rock station and liked what they heard. Lipsticked girls high on fashion stood next to frumpy hippie chicks in San Francisco, as both waited patiently by the Strokes' tour bus after their Fillmore show, holding their promo posters and hoping to meet the Strokes in person.

That, more than anything, provides the key to the mystery of the Strokes. Like the breakout bands before them, the band has become sort of a bridge between the mainstream and the indie rock world. For those who like the music, and I count myself in that camp, they are the band that stands in the mainstream arena against so much prefab pop, rock and metal. Of course, though, not all music critics will feel the same, and just as I finish this article, I get an e-mail an indie-rock loving editor sent to a group of writers that turns this whole discussion back on its head: "Is it just me, or has the record industry come to a grinding halt? Please, somebody turn me on to a good record -- other than the Rival Schools album, I hate all music," he writes. "And if anybody says, 'the Strokes,' you're off this list."

Jennifer Maerz is a music writer living in San Francisco.